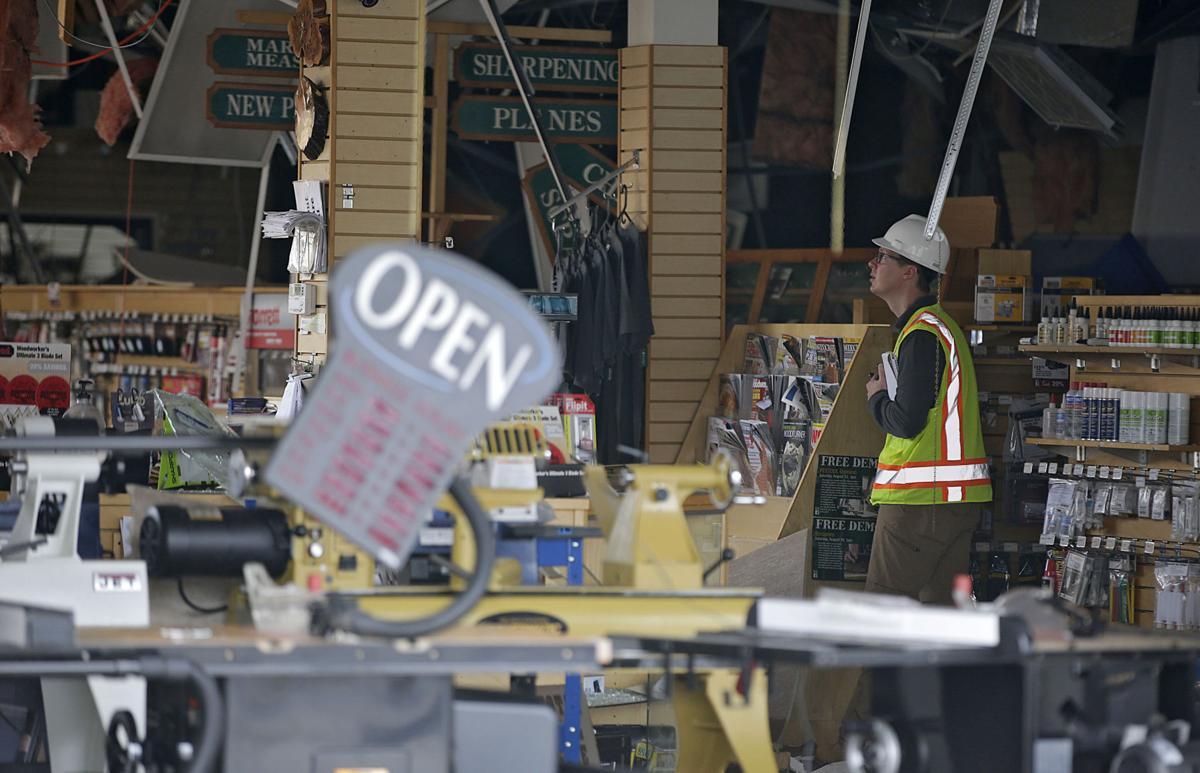 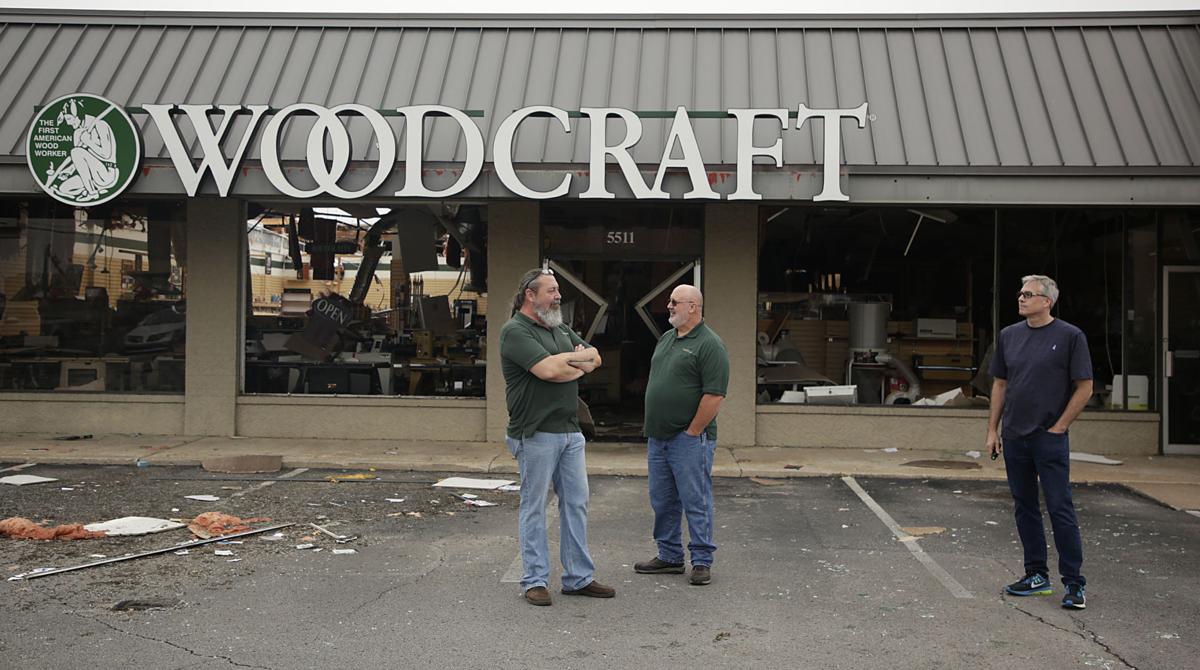 Assistant Manager Todd Phillips (left), Manager Mark McNutt and owner Allan Chaney stand outside the Woodcraft store as they wait for building inspectors to tell them whether it's safe to enter the building Monday. A tornado hit the area early Sunday. MIKE SIMONS/Tulsa World 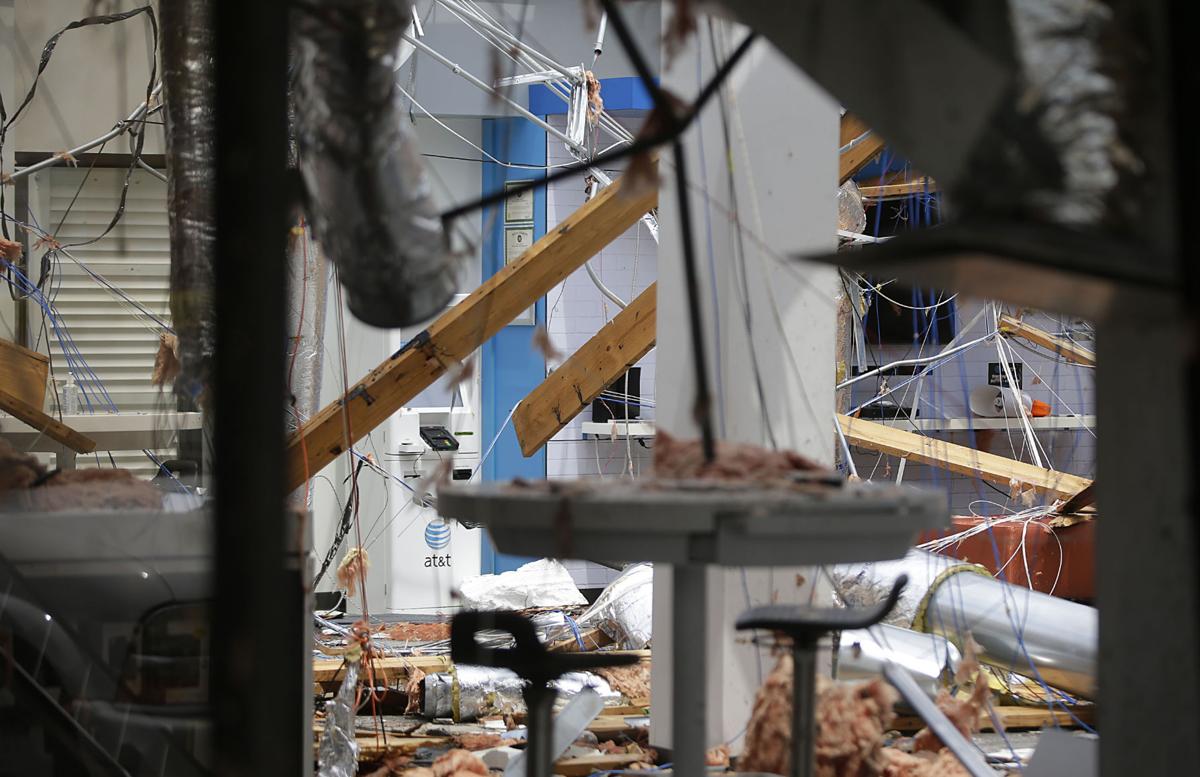 An AT&T store, damaged by an early Sunday tornado, is seen on Monday. MIKE SIMONS/Tulsa World 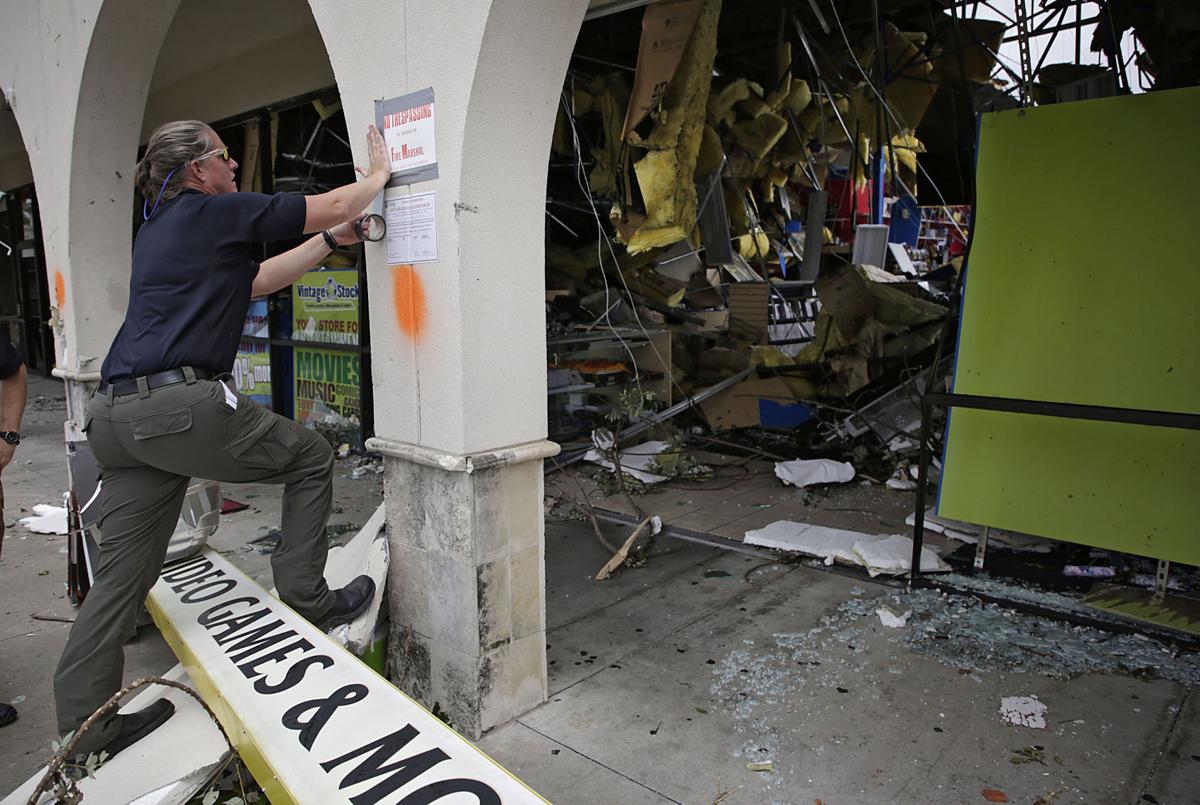 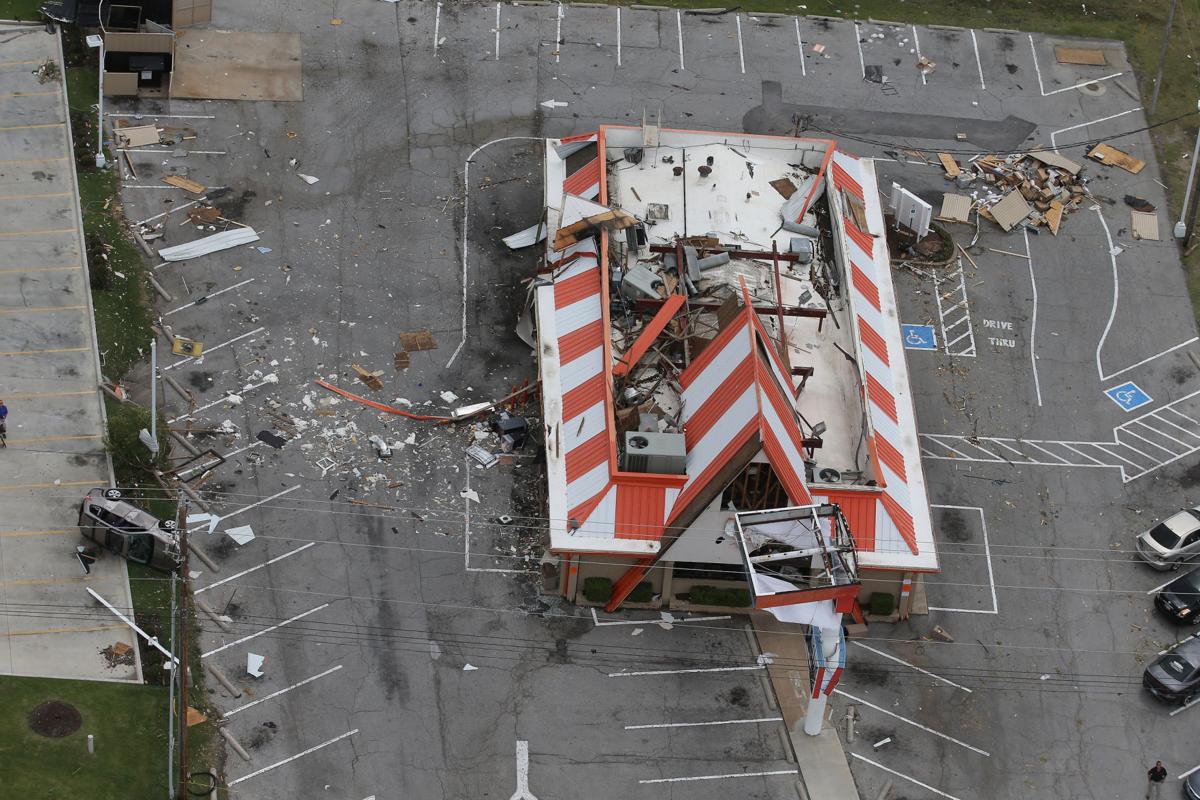 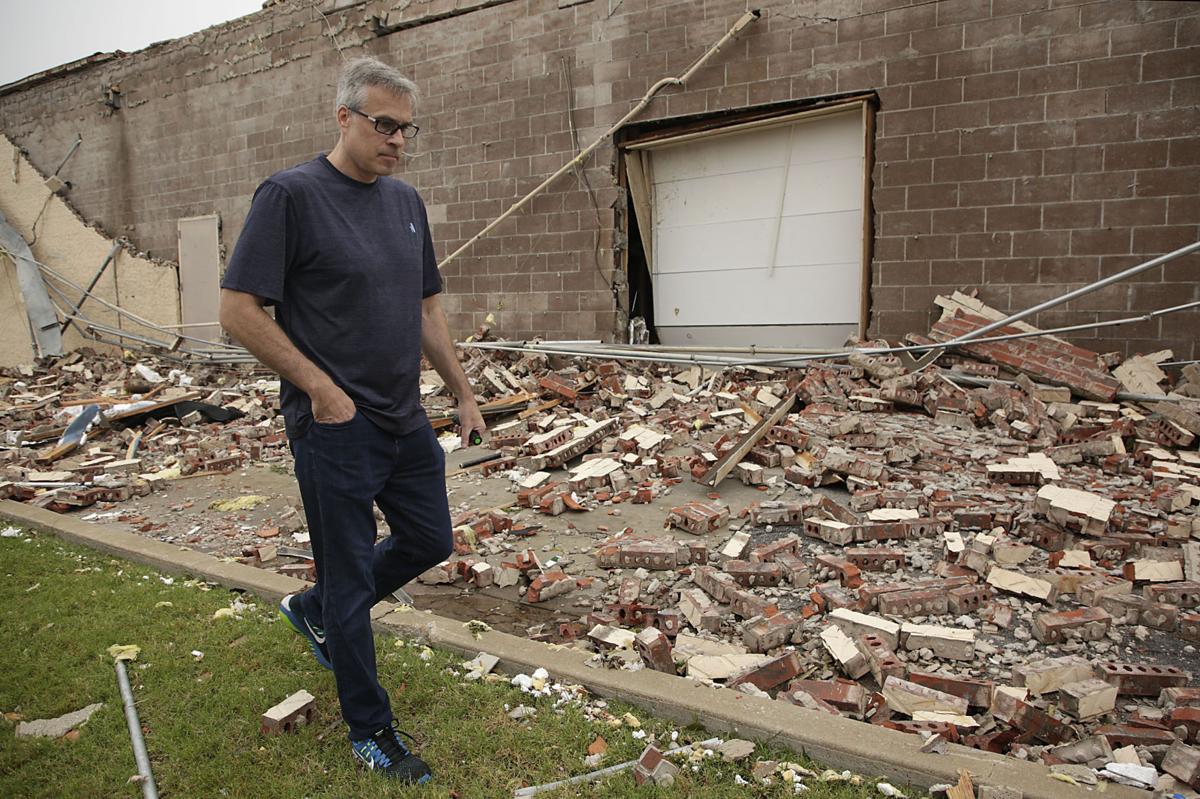 Allan Chaney, owner of Woodcraft, views damage at the back of his store on Monday. A tornado hit the area early Sunday. MIKE SIMONS/Tulsa World 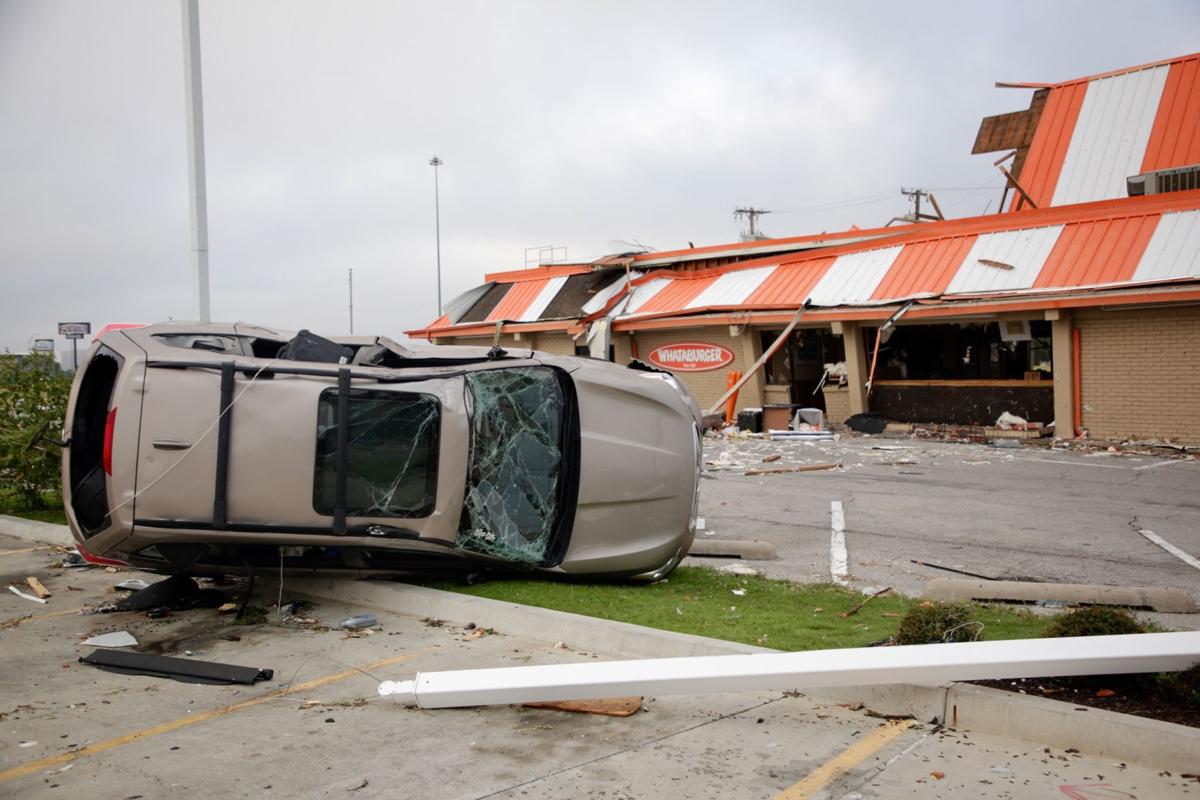 An overturned car lies in the parking lot of the damaged Whataburger near 41st Street and Interstate 44. MIKE SIMONS/Tulsa World 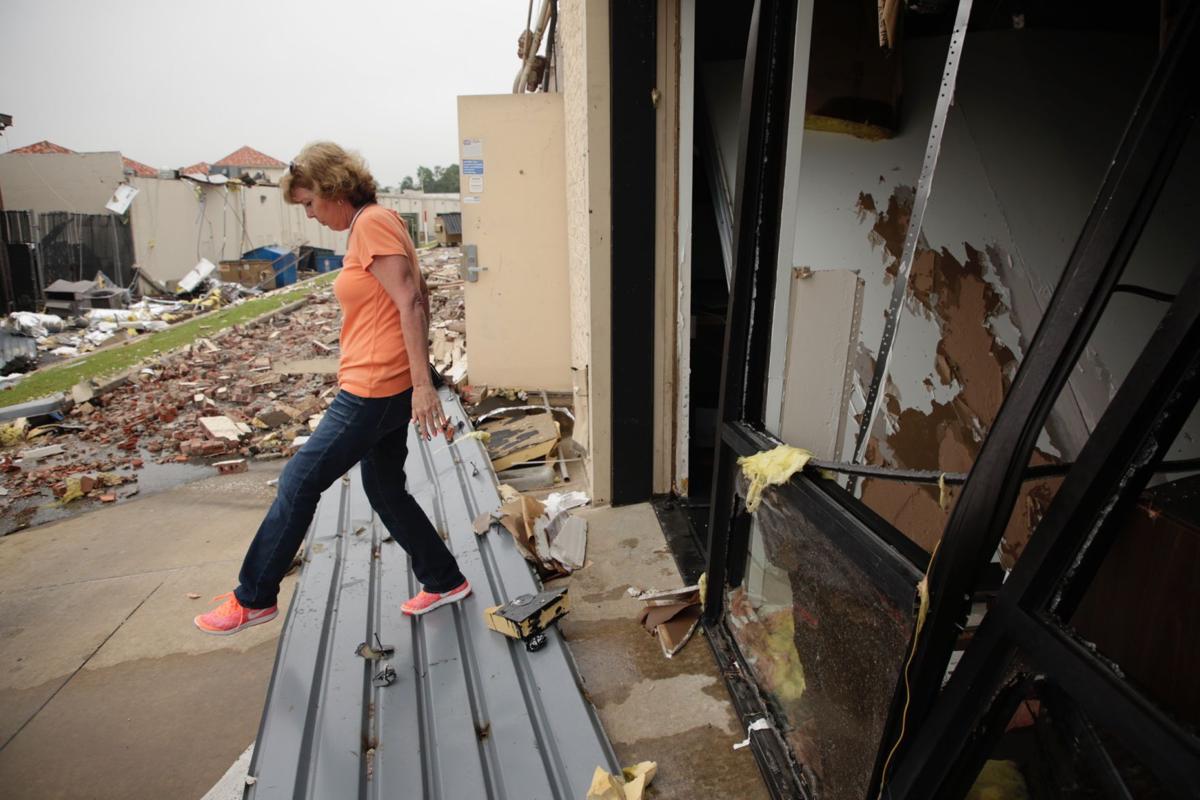 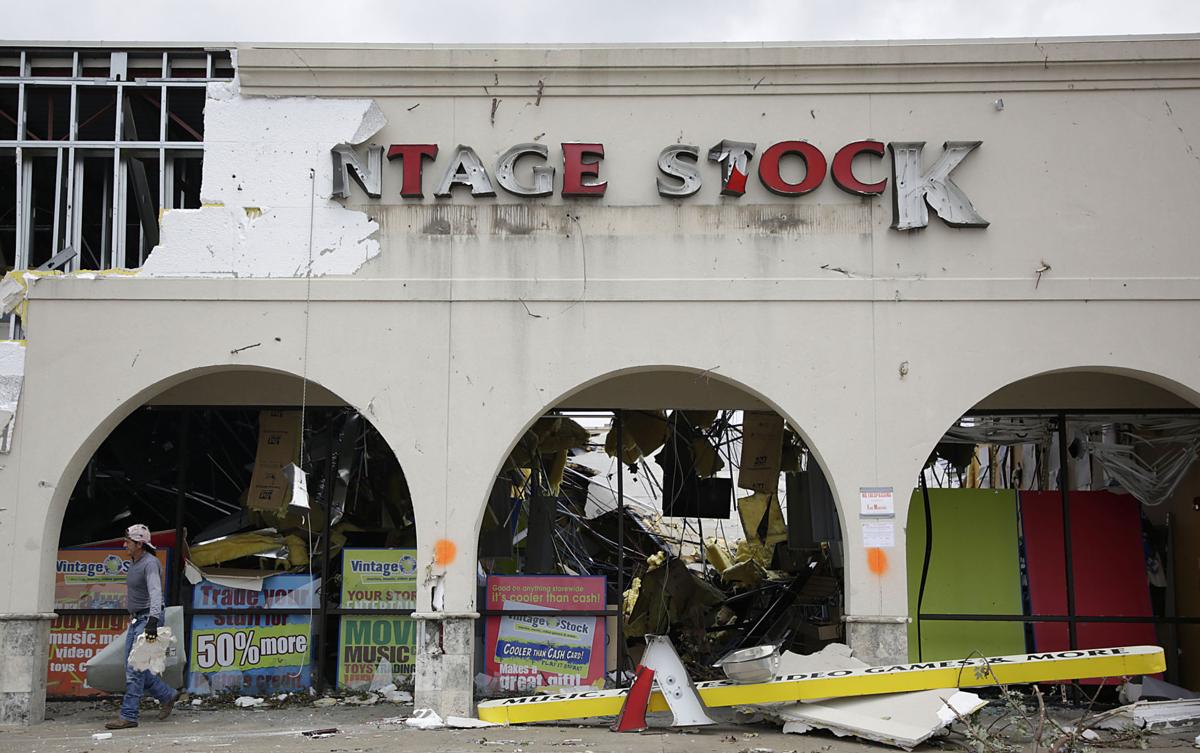 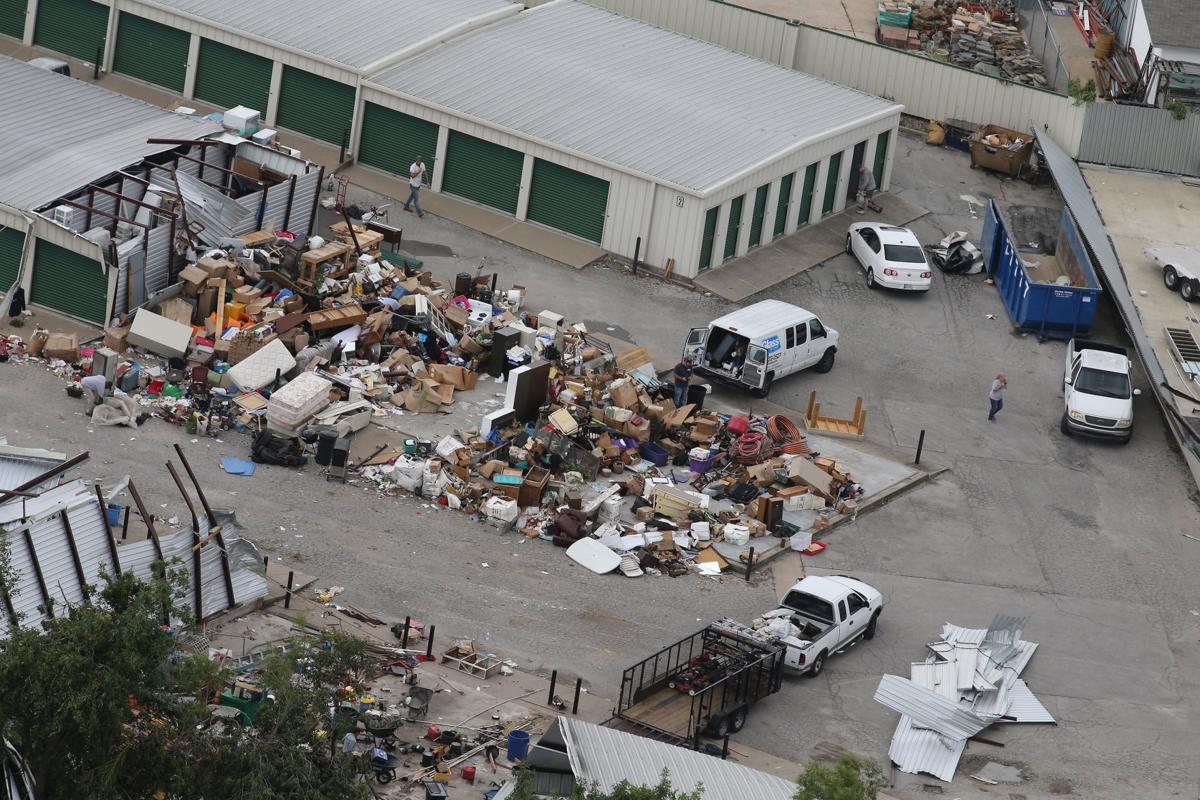 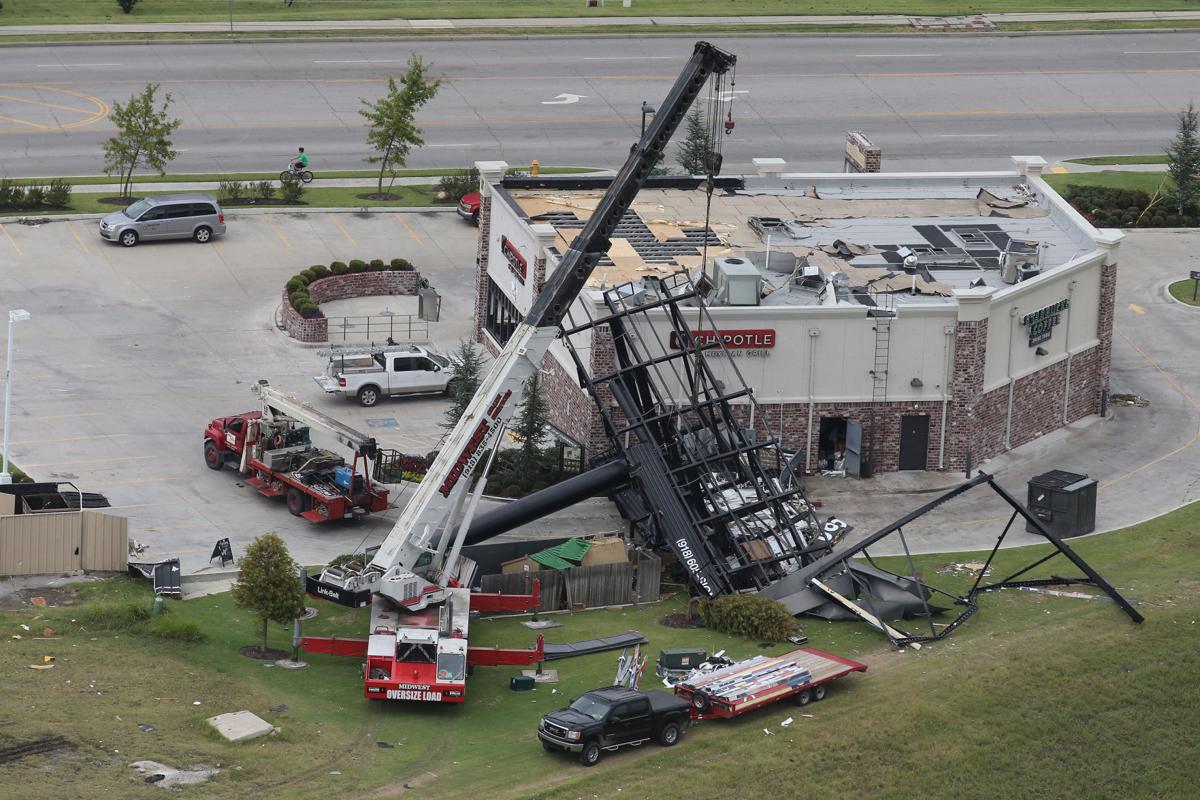 A crane is used to lift the framework of a billboard that toppled behind a Chipotle Mexican Grill and Starbucks near 41st Street and Sheridan Road during the tornado that swept through the area early Sunday. TOM GILBERT/Tulsa World

Assistant Manager Todd Phillips (left), Manager Mark McNutt and owner Allan Chaney stand outside the Woodcraft store as they wait for building inspectors to tell them whether it's safe to enter the building Monday. A tornado hit the area early Sunday. MIKE SIMONS/Tulsa World

An AT&T store, damaged by an early Sunday tornado, is seen on Monday. MIKE SIMONS/Tulsa World

Allan Chaney, owner of Woodcraft, views damage at the back of his store on Monday. A tornado hit the area early Sunday. MIKE SIMONS/Tulsa World

An overturned car lies in the parking lot of the damaged Whataburger near 41st Street and Interstate 44. MIKE SIMONS/Tulsa World

A crane is used to lift the framework of a billboard that toppled behind a Chipotle Mexican Grill and Starbucks near 41st Street and Sheridan Road during the tornado that swept through the area early Sunday. TOM GILBERT/Tulsa World

Injured Tulsa tornado survivor describes being hurled like a baseball, helping other wounded inside TGI Fridays

EF2 tornado that hurt 30, ripped through midtown, was rare in 2 ways

'It could have been a lot worse': Employees, residents rattled by surprise storm

Why weren't the sirens activated during Sunday's tornado?

Owner Allan Chaney stood tantalizingly near apparently salvageable items inside his severely damaged Woodcraft store, but the goods effectively were out of reach after officials condemned his building as unsafe to enter.

Chaney’s business was among 10 that were condemned by city inspectors Monday along 41st Street between Yale Avenue and Sheridan Road. Officials determined that 129 businesses were damaged — including four that were destroyed — when an EF2 tornado swept through Tulsa early Sunday.

Within an hour of each other, three more tornadoes — all rated EF1 — touched down in Broken Arrow and Rogers County.

In midtown Tulsa’s Highland Plaza development, Chaney could only stand on the sidewalk to survey the extensive damage inside what he described as his “candy store” for woodworkers. Inspectors were evaluating whether the structure can be shored up enough to allow workers in to salvage products.

Chaney also is awaiting a private engineering firm’s assessment of whether the store can be rebuilt in a reasonable time or should be demolished. An option is to move to another space farther north in Highland Plaza — his location for 16 years.

“If I can’t get open by Christmas, we’re dead,” Chaney said. “Woodworking is a seasonal business. We do three-fourths of our sales in November, December, January and February.

“So if I can’t get open by Nov. 1, I’m in big trouble. If I can get the doors open by then, it’ll be a rough year, but it’ll be manageable. We’ve got to get it open before Christmas.”

Chaney estimated that about a third of his roof is gone. The north wall has caved into the adjacent space. The cinderblock wall on the shop’s back side has been pushed inward.

“It doesn’t look like it’s a total loss in inventory,” Chaney said, “but it’s so hard to tell until we start picking through stuff what’s savable and what’s not.”

Utility poles were replaced along 41st Street between Yale and Sheridan, where the street remained closed to motorists Monday. Debris was swept up or pushed into piles, and street sweepers made multiple passes to help remove broken glass and other tiny hazards from the roadway.

Mayor G.T. Bynum toured the tornado damage early Monday afternoon, beginning outside what is left of TGI Fridays. The storm gutted the restaurant and sent eight customers and employees to the hospital.

“I have seen tornado damage all my life,” Bynum said, noting that he grew up as the son of a Red Cross administrator. “But this kind of damage in the middle of Tulsa is something I have never seen before.”

Police thwarted one attempt at looting, the mayor said. He went out of his way several times to shake hands with police officers who were patrolling the area.

“I am so proud of our police officers,” Bynum said, “and firefighters and EMSA, who I think saved a lot of lives here.”

The city was “very fortunate” that the storm hit a mostly commercial district instead of devastating a residential area and that the tornado struck overnight instead of during business hours, when the shops and restaurants along 41st Street would have been packed on a sales tax holiday weekend, he said.

“The timing of it definitely helped,” he said. “We’re very lucky.”

Residents with storm damage should pile green waste at the curb for pickup, although city officials haven’t finalized plans to collect it, Bynum said.

The first tornado blazed a nearly seven-mile path through midtown Tulsa, starting about 1:20 a.m. Sunday, according to the National Weather Service in Tulsa.

It moved east-southeast after developing over a neighborhood east of Harvard Avenue and south of 36th Street. The maximum width of the tornado’s path was 550 yards.

The city of Tulsa and Tulsa Area Emergency Management Agency reported that 19 homes were damaged, of which one was destroyed and nine sustained major damage. Four businesses were destroyed, 68 others had major damage and 57 had minor damage.

The second tornado, an EF1, touched down in Broken Arrow about 1:30 a.m., cutting a three-mile path. Its maximum width was 400 yards, with wind speeds up to 100 mph. Numerous homes were reported damaged.

The tornado developed over a neighborhood north of 51st Street and west of 177th East Avenue in Tulsa County. It moved east-southeast between Lynn Lane and County Line Road and dissipated in Wagoner County, according to the damage survey.

The third tornado, another EF1, traced a 4½-mile path about 200 yards wide in the Oologah area in Rogers County. It touched down about 1:40 a.m., damaging one home.

A third EF1 tornado touched down about 2:10 a.m. six miles south of Chelsea in Rogers County. There were no reports of damaged homes there.

No injuries were associated with any of the three EF1 tornadoes.

Kier Masso was sweeping up in front of the Southroads Village strip mall Monday afternoon, preparing for what he hoped would be a return of customers to other shopping center tenants within 48 hours.

Masso is a partner in the company that owns the development, where three businesses — Vintage Stock, The Flame Broiler and H&R Block — were condemned.

“Just looking at the spaces, it looks like they’ll be deemed a total loss,” Masso said.

He said Vintage Stock and The Flame Broiler want to reopen as soon as possible. H&R Block had just invested major financial resources into a remodel, so he reasoned that the tax firm may well rebuild and return to its space of about 15 years.

East of Sheridan Road, some businesses got back to work Monday morning even as the cleanup continued. With most of a wall and part of the roof missing, Okie Crossfit pulled equipment into the parking lot and held exercise classes outdoors.

A few blocks away, business owner Scott Bogie was sweeping debris out of his parking lot while his employees went on with business as usual inside A&B Identity.

Overhead doors must be replaced before the company can receive bulk freight, and air conditioners on the roof will need to be replaced. But his company was among the first to have its power restored Monday, Bogie said.

“All our employees are here today,” he said. “And they’re doing their normal jobs, not cleaning up. We did enough of that yesterday.”

Students, however, can continue their studies online or at sister campuses on Sheridan Road, college President Kevin Kirk said.

“The positive attitudes and incredible support from the community have made a challenging situation into one of compassion and love,” Kirk said.

Meanwhile, the Baptist General Convention of Oklahoma deployed three chain-saw teams with a total of 24 team members to help with clean-up efforts. BGCO Disaster Relief Director Sam Porter estimated that the cleanup will take a week due to the number of large trees in the area.

Harrison Grimwood contributed to this story.

Views from above as people cleanup after tornadoes hit midtown Tulsa on Sunday morning.

The city of Tulsa and the American Red Cross have received many calls from individuals and businesses that want to offer donations and assistance.

People are asked to call the American Red Cross at 918-831-1109 to coordinate volunteer efforts.

Those who believe they've had a gas line break are urged to leave the area and call 911 or the Oklahoma Natural Gas emergency line at 800-458-5251.

U-Haul Co. of Tulsa is offering 30 days of free self-storage to residents who were affected by the severe storms and tornadoes early Sunday. Find participating sites at bit.ly/uhaulstorm.