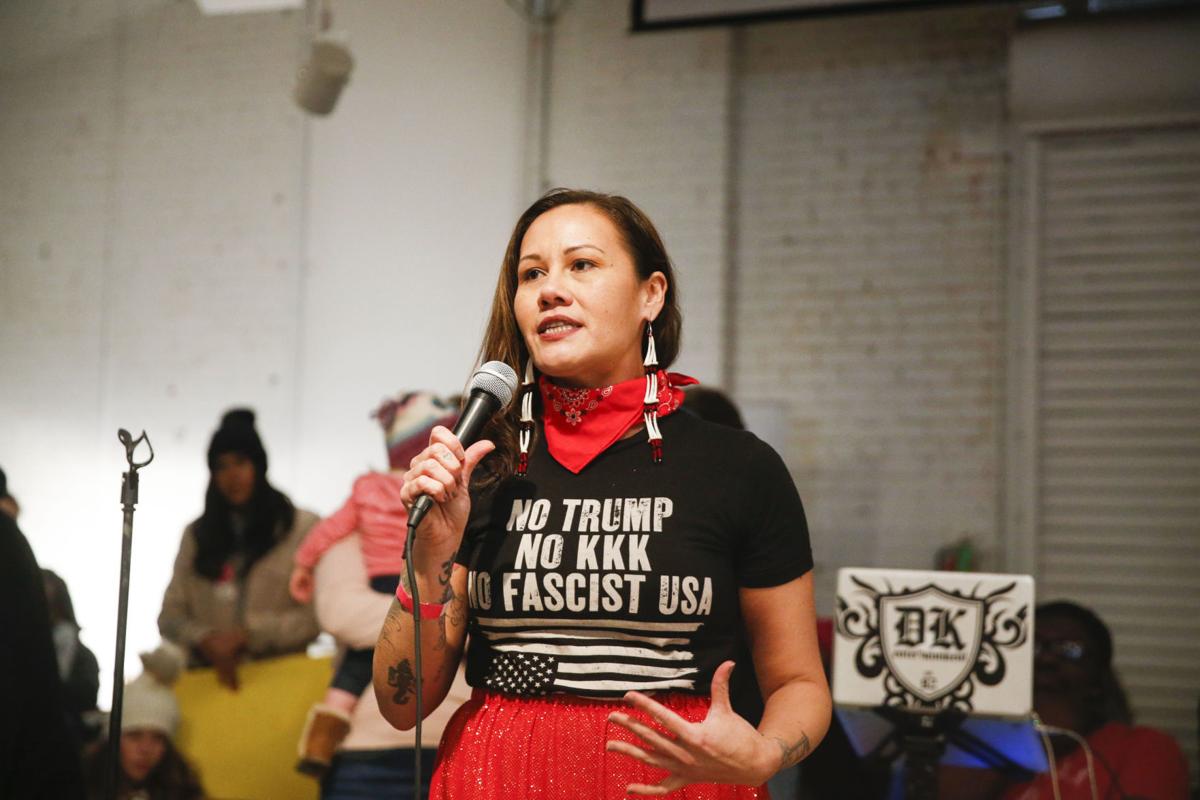 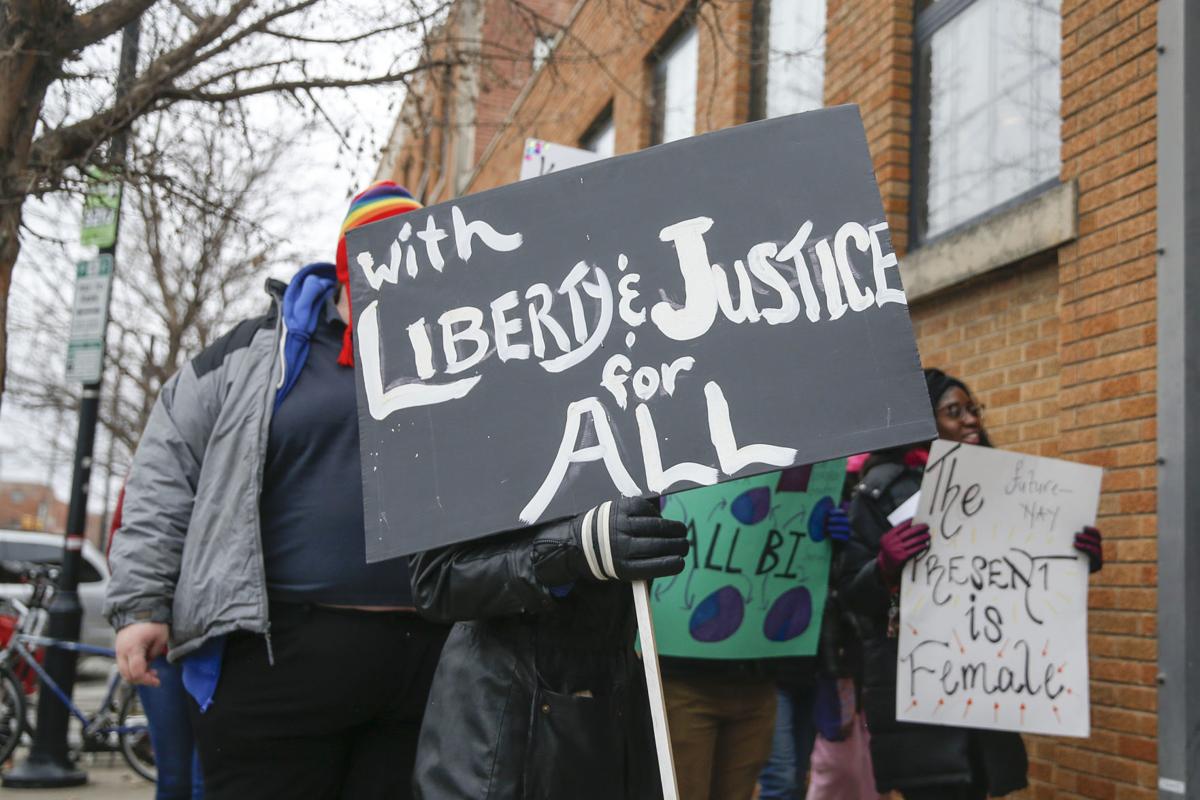 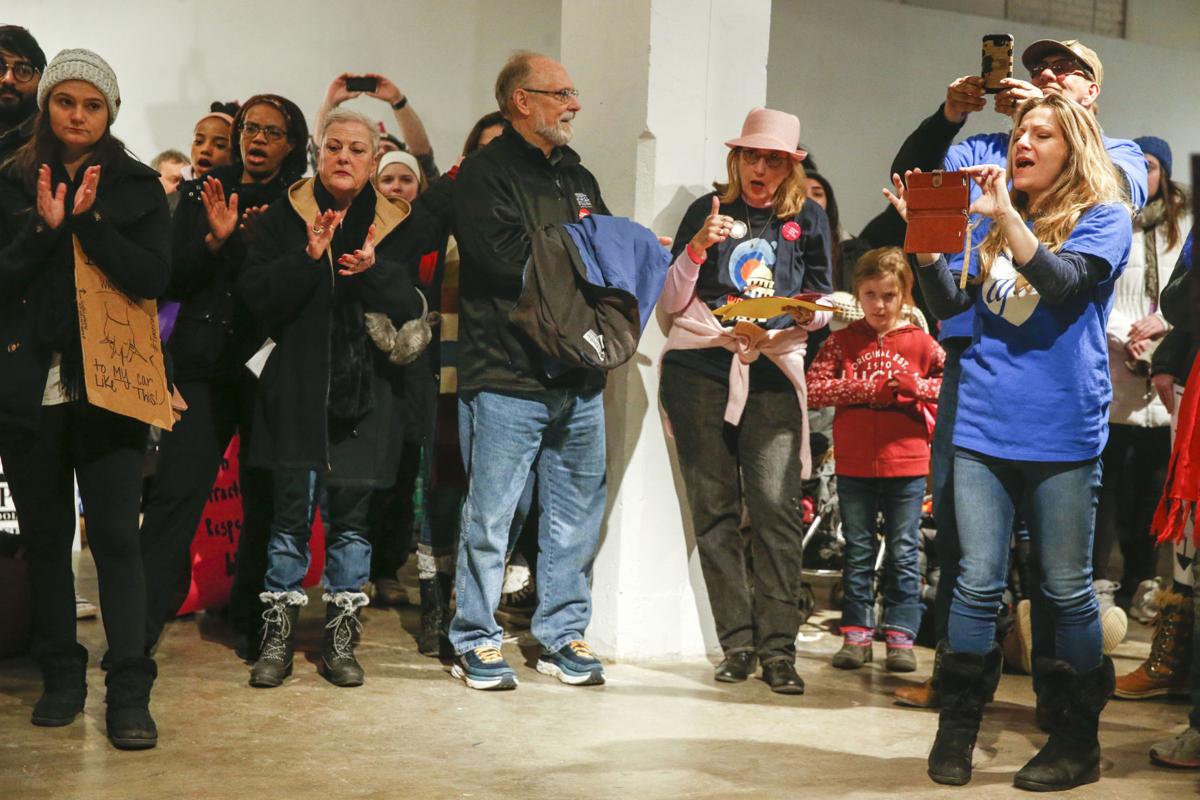 Mike Howe, of Broken Arrow, and DeeAnn Paisley, of Tulsa, cheer the speakers at the Women’s March IAN MAULE/Tulsa World 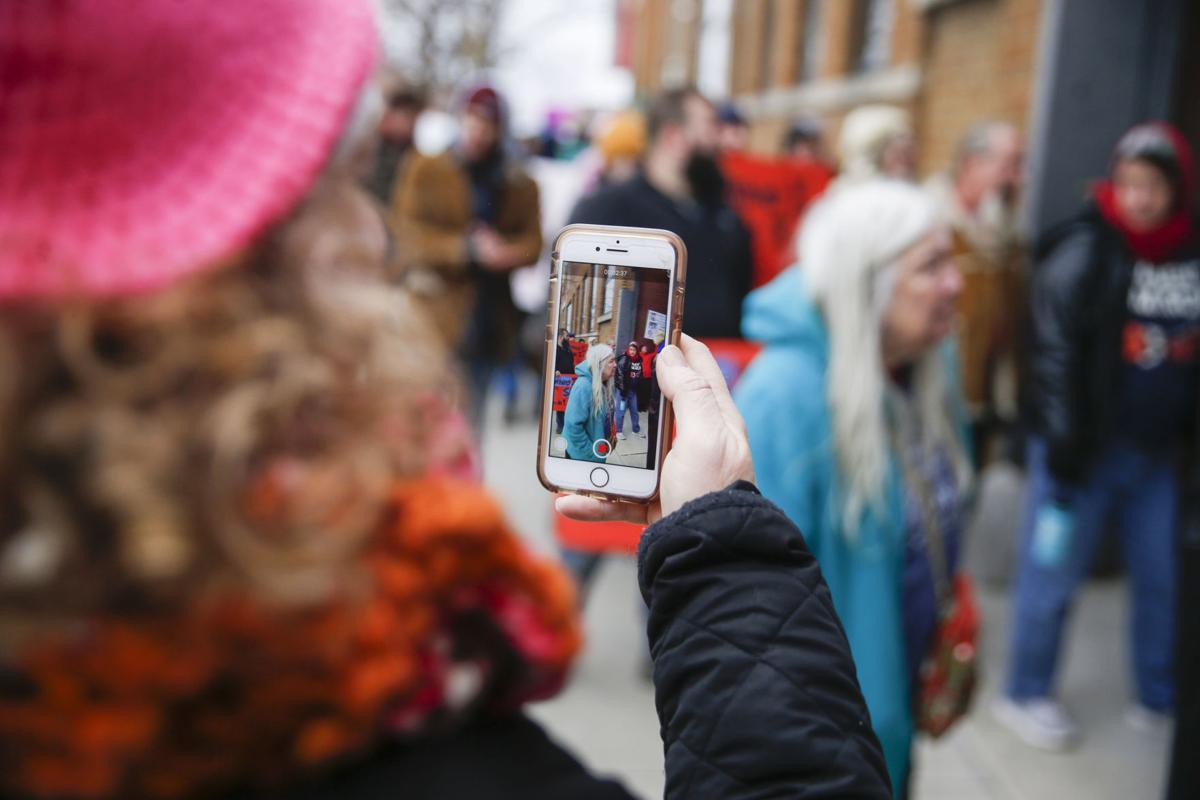 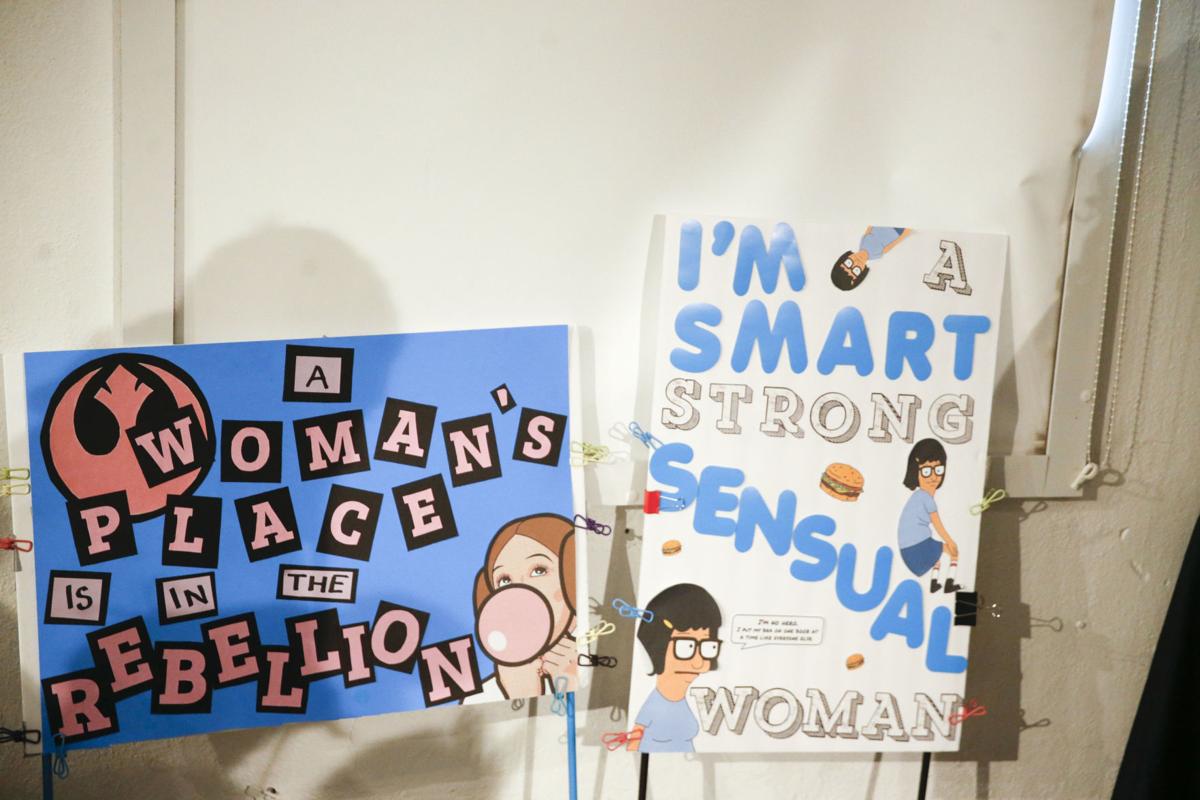 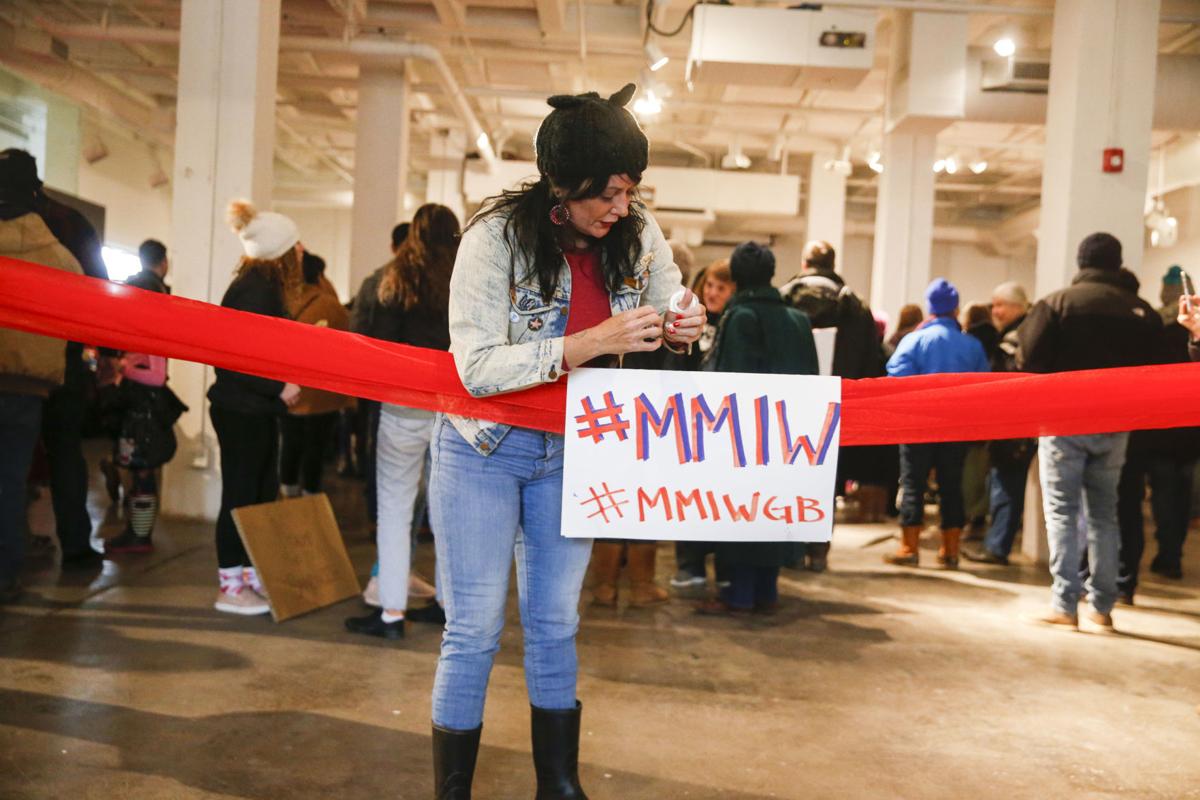 Although the cold didn’t quell anyone’s spirits, it did turn what was planned as a march and rally into more of an expo inside Living Arts of Tulsa.

Angela Summers, a nurse from Sapulpa, came to the march, headed into her third year of protesting the administration of President Donald Trump.

The 45th president was a common villain, along with Vice President Mike Pence, at the Women’s March, with signs ranging from simple calls for impeachment to more graphic adaptations of Trump statements.

Summers said supporting women’s rights is supporting everyone’s rights, and it’s why she braved the frigid weather to attend the march.

“I’m so glad they went ahead and kept it going because it wasn’t going to happen,” Summers said. “People picked up the gauntlet and were here. ... This administration has just polarized people and we feel the need to speak out about rights for everyone. Marginalized people stick together.”

Although labeled and advertised as the Women’s March, the event drew activists, signs and chants for multiple causes from racial equality, education funding and against gun violence.

Jennifer Tippett came from Broken Arrow with her family carrying pink and white signs for the mothers of murder victims. Tippett said the group brought the signs as a surprise gesture of support for her best friend, Stayce Williams, whose son, Verdell Walker, was shot and killed in an August 2014 double-homicide in midtown Tulsa.

Williams did not attend the march, but Tippett said she wanted to spread awareness about what mothers face in the aftermath of homicide having seen what her best friend has endured.

“I think sometimes we forget about the moms who have to deal with the pain and loss of a child,” Tippett said. “This is real life, something that a mother has to deal with and battle every single day of her life. I’m here to support her and her journey as she walks every single day knowing that she’s never going to have her son with her today.”

Wearing a “No Trump, No KKK, No Fascist USA” shirt, Ashley McCray came to her third Women’s March after having attended previous events in Tulsa and the inaugural march in Washington, D.C., in 2017.

McCray spoke to the crowd about the environment and how violence against Earth is tied to violence against women. She said the diverse and wide-ranging crowd shows how the issues intersect.

“And I was also trying to encourage the folks who were here today to do more than just hold a sign, to go visit their city reps, state reps. Go to the places where bad things are happening and make change, because we can’t count on administrations to always have those things in mind for us.”

Mike Howe, of Broken Arrow, and DeeAnn Paisley, of Tulsa, cheer the speakers at the Women’s March IAN MAULE/Tulsa World