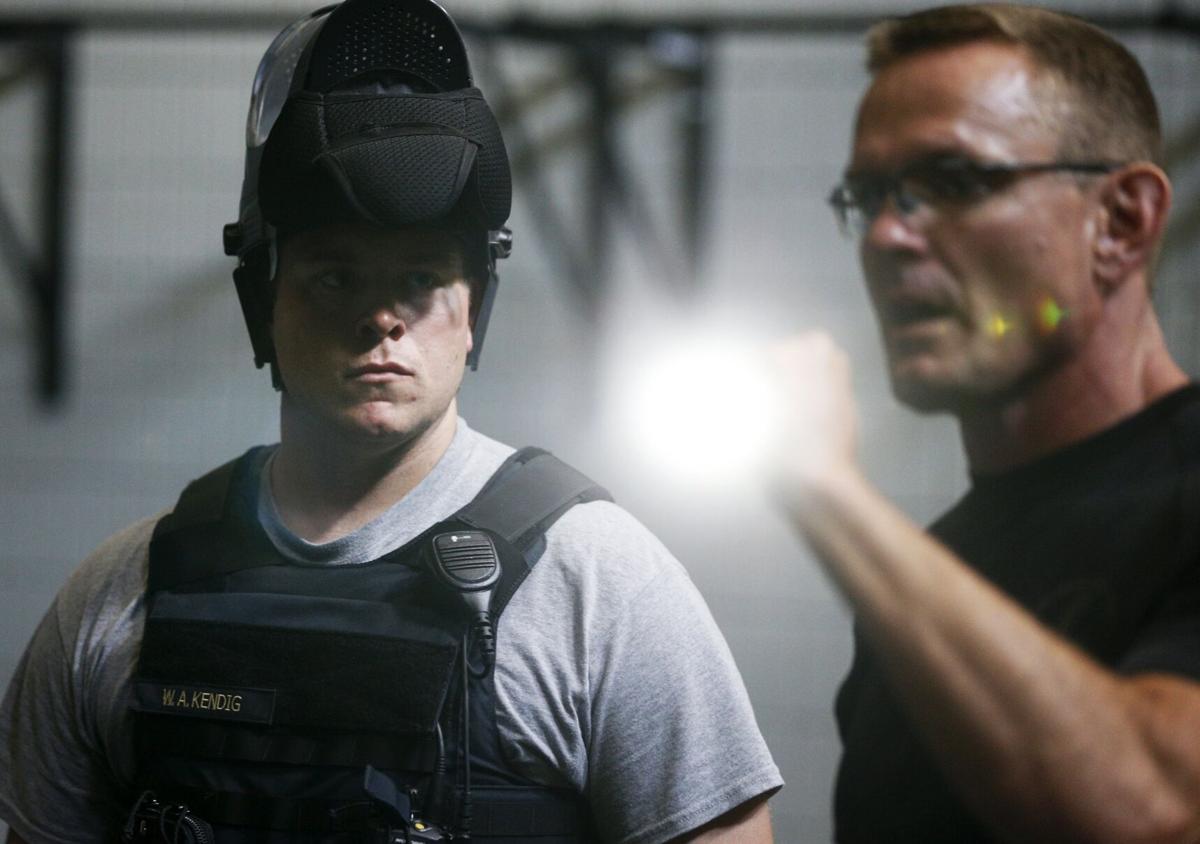 William Kendig (left) watches Lt. Virgil Litterell, lead defensive tactics instructor, at the Tulsa Police Academy. As Tulsa police train new officers, they’re also facing challenges keeping them on the force as the department faces a wave of resignations, with many of them being younger officers. 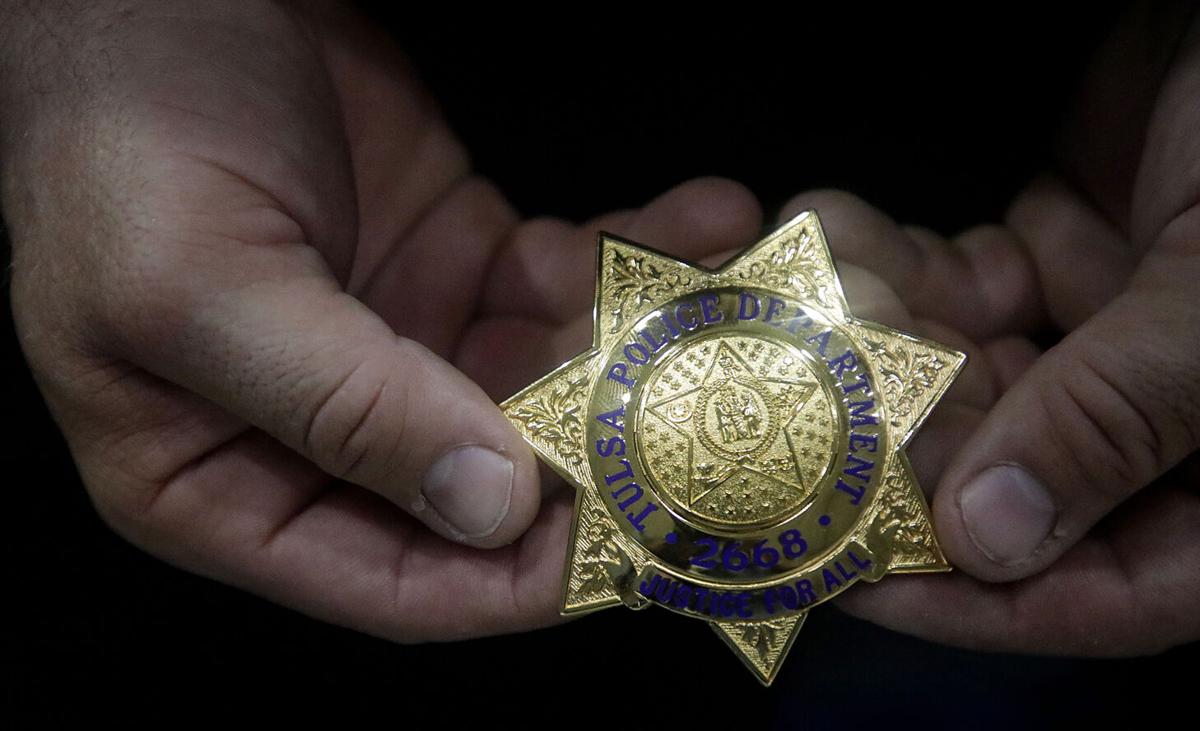 A Tulsa Police official said resignations within the agency have historically been rare, but already this year 18 mostly young officers have left to pursue other opportunities. 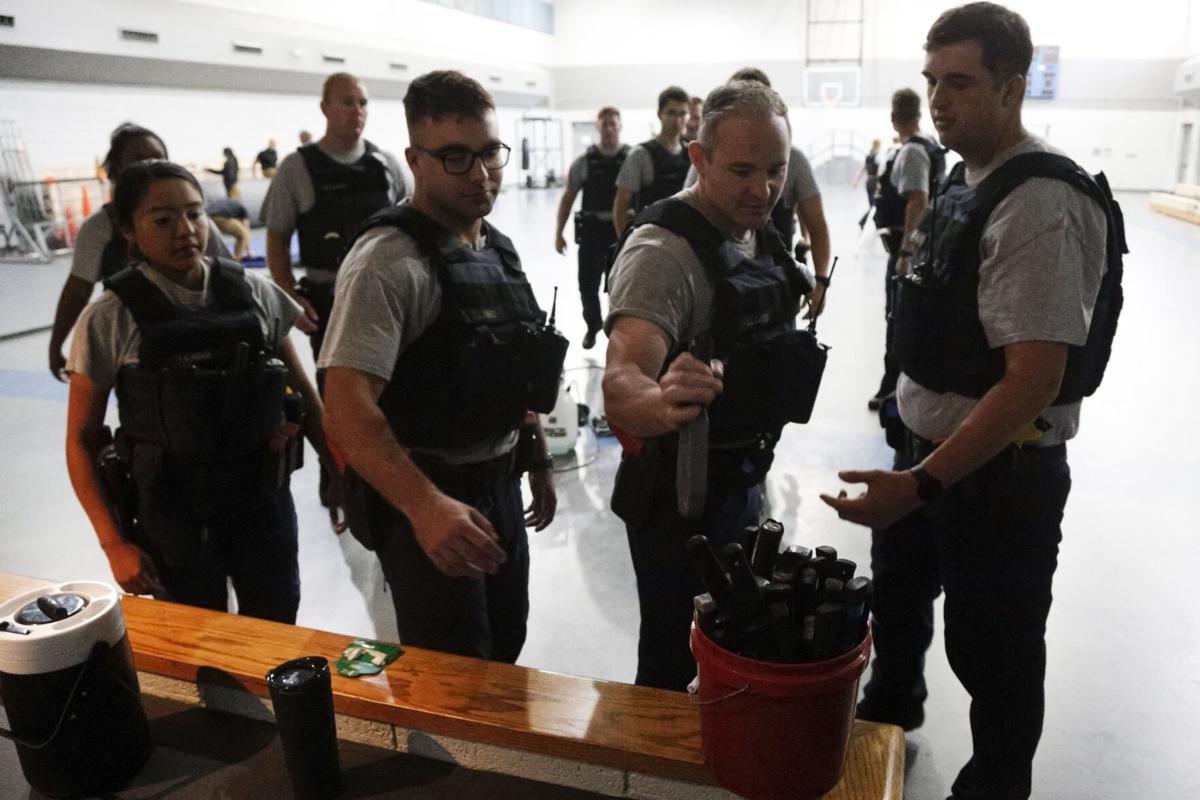 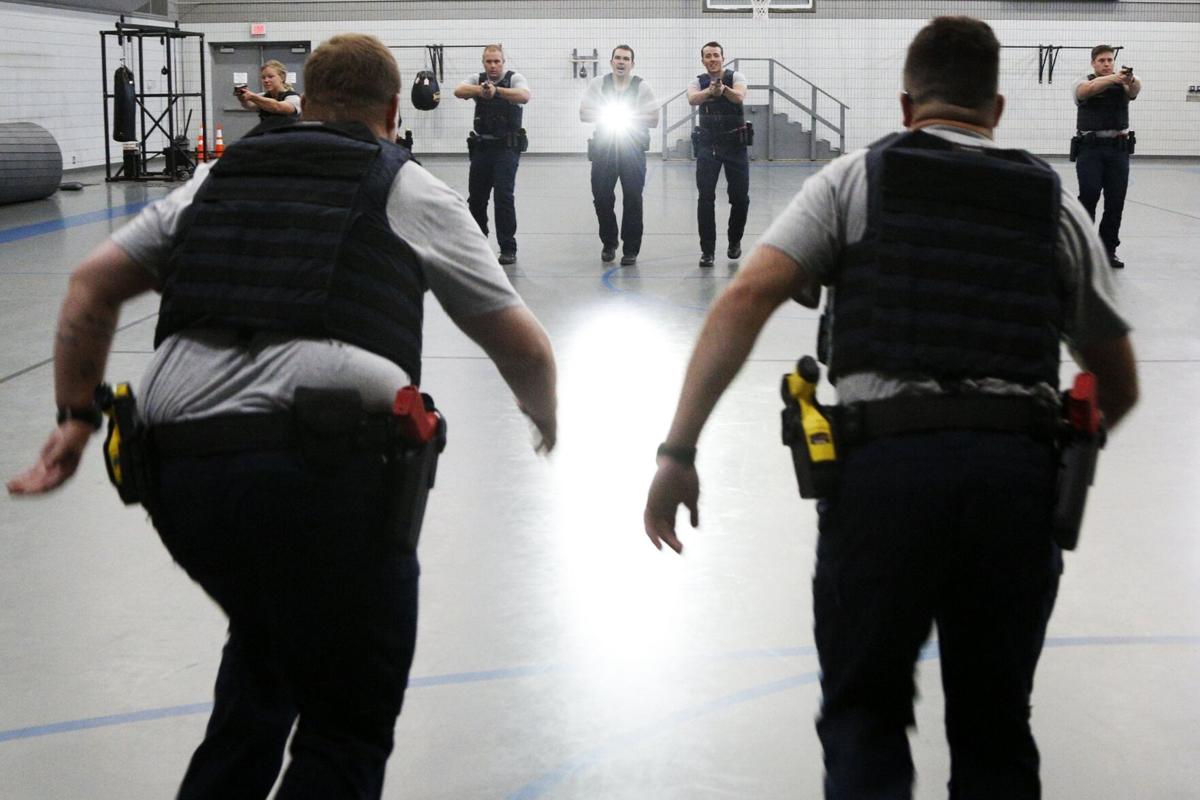 Recruits train for a situation where they need to respond quickly to a threat at the Tulsa Police Academy.

“It’s never been a more difficult time to be a police officer.”

Jeff Downs, president of the local Fraternal Order of Police, was quoting a speaker at a recent FOP conference, but he said he agrees.

Law enforcement agencies across the nation are losing manpower to resignations among younger officers, making recruitment even more important amid the challenge of finding applicants.

Matt Kirkland, the director of planning, policy and quality control for the Tulsa Police Department, said resignations within the agency have historically been rare. However, he told city councilors, TPD already this year has lost 18 mostly young officers. They cited family pressures and/or moving to federal jobs or the private sector, Kirkland said.

“It used to be when you got into policing, it was very much a career mindset,” Deputy Chief Eric Dalgleish said at a City Council panel. “It’s all you’ve ever wanted to do, and now that does not seem to carry quite as consistently as it did.

Downs, with nearly three decades of law enforcement experience, said the mental stress of the job has only increased, along with the population of “armchair quarterbacks.”

“They second-guess what you do — basically review it from the comfort of their desk chair or couch and make negative comments against officers,” Downs said. “You go out and save someone’s life, and then someone criticizes the way you did it.”

Downs acknowledged that Tulsa agencies enjoy a good relationship with residents compared to other cities that have made headlines in discord. Tulsa Police Capt. Richard Meulenberg emphasized that the “overwhelming majority” of officers are doing a good job, but he said “a constant barrage of negativity can wear on anybody.”

Tulsa County Sheriff Vic Regalado, who previously served in a variety of roles at the Tulsa Police Department for 23 years, said he’s struggling with similar attrition rates among deputies and detention officers.

The sheriff called his agency’s staffing level “critical” at about 70 detention officers short of an “acceptable” amount of 285 and even farther from his ideal 300. The shortage of about 20 deputy positions, Regalado says, is expected to grow with 10 upcoming resignations and retirements confirmed. More than 120 detention staff members have retired or resigned this year.

Those who remain are using psychological services in numbers never before seen, Regalado said, and he’s pleased the agency has built up the services in years past to meet demand.

He recognizes the difficulty of law enforcement and how challenges have grown in the past several years, but he is concerned for the future.

“It’s very easy and understandable to give up,” Regalado said. “But if you give up, and good people do not go into law enforcement, who is going to do it?

“If good people turn their back on doing good things, then we’re all in trouble.”

Although pay is not the only factor most consider when deciding which department to apply to, Meulenberg said it is one of the most important and easily accessible that prospective hires use to inform their decisions, especially unattached college graduates surfing the web.

“They can go anywhere,” Meulenberg said. “It’s hard to entice people with the intangible things that make working here awesome.”

Tulsa’s pay lags behind several smaller agencies in the state and a few agencies locally, though the city has provided satisfactory performance and/or across-the-board pay increases for officers almost every fiscal year since 2011.

Negotiations for the upcoming fiscal year are ongoing, but Downs said staffing shortages have caused a unique time where the FOP, department and city seem to be on the same page.

“All three of us are working together to come up with solutions because we realize how much of a problem this could be for citizens if we don’t get this fixed,” Downs said. “This concerns us all.”

Before Regalado’s administration took a long look at the budget when he was elected in 2016, some employees hadn’t received a raise in more than a decade.

“It was about investing in our employees,” Regalado said. “If we don’t start keeping our employees and/or recruiting, we’re going to have to start pulling back services, which, our citizens are going to be impacted.”

Tulsa Police Recruitment Officer Khara Bresee said she often addresses misconceptions about law enforcement with potential recruits. Many think the academy is akin to a military boot camp, but it’s more of an educational setting, she said.

TPD is looking for applicants who are empathetic, well-rounded people with good communication skills who understand the community. Everything else is trainable, said Bresee, who was a wedding planner before she became a police officer.

Those interested in law enforcement can get a better idea of what the career entails through upcoming events in Tulsa.

TPD’s 2021 Women in Policing day, July 17, will include a panel lunch, use-of-force simulator and an overview of defensive tactics, the hiring process and physical agility test for those 18 and up. Those interested may email Bresee at kbresee@cityoftulsa.org to register by Wednesday, June 30.

A similar event that will be open to all prospects is slated for September, Bresee said.

“There’s people that don’t really know what it’s all about, so we invite them to come and join these programs,” she said. “It really is about having a relationship with your community and being able to communicate with people; it’s not always running and gunning.”

Law enforcement agencies rarely meet their authorized strength or ideal strength due to attrition, but this year, some are falling more behind than others.

William Kendig (left) watches Lt. Virgil Litterell, lead defensive tactics instructor, at the Tulsa Police Academy. As Tulsa police train new officers, they’re also facing challenges keeping them on the force as the department faces a wave of resignations, with many of them being younger officers.

A Tulsa Police official said resignations within the agency have historically been rare, but already this year 18 mostly young officers have left to pursue other opportunities.

Recruits train for a situation where they need to respond quickly to a threat at the Tulsa Police Academy.