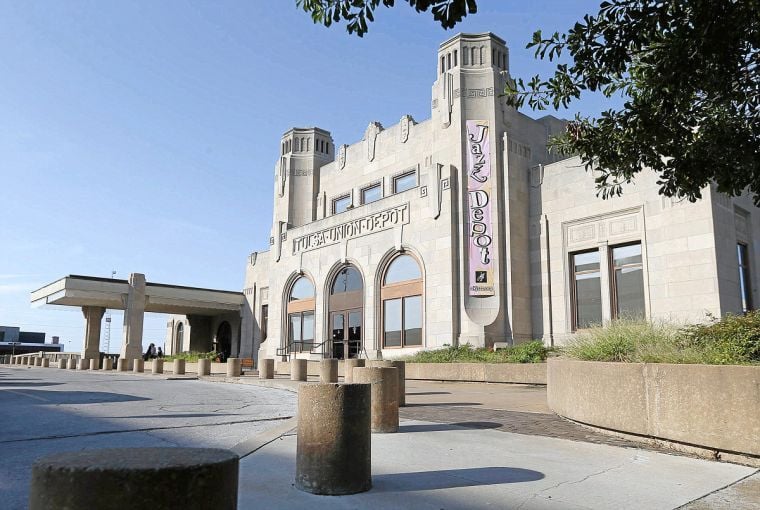 The Oklahoma Jazz Hall of Fame is in the Union Depot, a downtown building that was purchased and renovated by Tulsa County as part of the Vision 2025 sales-tax program.

This rendering shows a proposed hall to display artifacts, part of the $2 million in improvements for the Jazz Hall of Fame in downtown Tulsa.

The Jazz Foundation, recently approved to buy the Jazz Hall of Fame in downtown Tulsa, proposed $2 million in improvements, including a rooftop bar.

The Jazz Foundation, recently approved to buy the Jazz Hall of Fame in downtown Tulsa, proposed $2 million in improvements, including a concert hall with dining.

A federal bankruptcy court on Thursday approved the sale of the Oklahoma Jazz Hall of Fame to a firm established by local businessman James Moore.

The $200,000 offer from The Jazz Foundation LLC was one of only two bids submitted to the bankruptcy trustee in the case and was the only bid designated as a “qualified bid” for the U.S. Bankruptcy Court, Northern District of Oklahoma, to consider.

Revenue from the sale will be used to pay approximately $46,000 to various entities owed under the Jazz Hall’s lease with TCIA. Moore’s group also is committing $2 million in improvements and to help ensure the financial sustainability of the Jazz Hall going forward, according to evidence presented Thursday in a court hearing held via telephone.

The closing on the sale is expected to take place by the end of June.

Attorney Stephen Moriarty, who has served as trustee during the bidding process for the Jazz Hall, called Moore’s group “the only game in town to keep the hall viable in that space.”

Moriarty presented evidence that interested parties included Tiffany Crutcher, Dewey Bartlett and the American Theatre Company, though none submitted bids. A $0 bid from the Maxine Horner Family Foundation was dismissed.

“I honestly believe Mr. Moore and his group have a vision for the Jazz Hall, and it’s close to the vision that (Tulsa taxpayers) had when they allowed for the funding to buy and refurbish the Jazz Hall,” Moriarty explained in making his recommendation the assets not be put to auction.

The Jazz Hall of Fame filed for bankruptcy in January after the Tulsa County Industrial Authority sued to evict the organization after it failed to pay bills totaling $8,474.

TCIA leases the Union Depot, at First Street and Cincinnati Avenue, to the Jazz Hall of Fame. The county used $4 million in Vision 2025 funds to purchase and refurbish the building for the Jazz Hall’s use.

The Jazz Hall pays $1 a year in rent and is required to cover tax, assessment, insurance and utility costs. The lease agreement would be unchanged in the terms of the sale to The Jazz Foundation.

The Jazz Hall and TCIA have been at odds over lease requirements and late payments for nearly a decade.

In 2012, county officials discussed terminating the Jazz Hall’s lease after it accumulated more than $30,000 in unpaid electric bills and thousands more in unpaid assessments and insurance costs.

Paul Thomas, bankruptcy counsel for the U.S. Trustees Office, noted on Thursday how the process to handle the Jazz Hall assets “could have gone another way” and offered “commendation for the parties for working through the issues.” Judge Terrence Michael said he agreed with Thomas’ characterization and commendation.

Moriarty said the Jazz Hall as it was originally envisioned “cannot continue to exist ... so it was critical to bring in someone new with a passion for the Jazz Hall, the corporate infrastructure necessary to maintain it, and the financial wherewithal to get it accomplished.”

Moore is founder of Moore, formerly Moore DM Group, a direct response marketing firm with a focus on nonprofits.

“When the opportunity to save one of the most historic buildings in Tulsa arose, we got excited,” Moore CEO Gretchen Littlefield said in a statement after the sale was approved. “This was a chance to give new life to an important and historic location.

“Celebrating the artists and industry of jazz and gospel in Oklahoma will continue to be a cornerstone of the Jazz Depot. In addition, we envision expanding the venue to host music festivals, a broadcast site for live and made-for-television events and a rooftop restaurant that features this amazing city as its backdrop.”

Moore’s bid for the Jazz Hall of Fame included a letter stating Jazz Foundation’s intent to dedicate $1 million for deferred maintenance and other improvements. The nonprofit would dedicate another $1 million for operating expenses and to satisfy future obligations under its lease with TCIA, according to the letter.

The bankruptcy case, currently subchapter 5, would likely be refiled as chapter 7 after the sale of the pertinent assets, Moriarty said.

Throwback Tulsa: Oklahoma Jazz Hall of Fame through the years

The 30-acre location at the base of Turkey Mountain — which was first purchased in 1953 and last renovated in 1968 — now hosts amenities including nature trails, a covered outdoor basketball court, a zipline, and areas for disc golf and kayaking thanks to a $15 million fundraising effort.

Police about 8 a.m. responded to a call of shots fired in the 1300 block of North Saint Louis Avenue.

As pedestrian bridge comes down, new Zink Dam goes up

The city continues to work on a $48 million overhaul of the dam, which is expected to be completed in the summer of 2023.

The Oklahoma Jazz Hall of Fame is in the Union Depot, a downtown building that was purchased and renovated by Tulsa County as part of the Vision 2025 sales-tax program.

This rendering shows a proposed hall to display artifacts, part of the $2 million in improvements for the Jazz Hall of Fame in downtown Tulsa.

The Jazz Foundation, recently approved to buy the Jazz Hall of Fame in downtown Tulsa, proposed $2 million in improvements, including a rooftop bar.

The Jazz Foundation, recently approved to buy the Jazz Hall of Fame in downtown Tulsa, proposed $2 million in improvements, including a concert hall with dining.