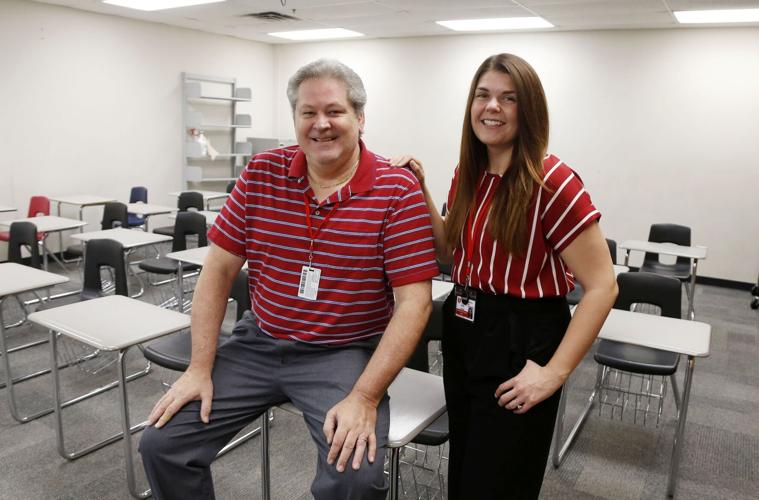 Andy Ash and Emily Overby are a father-daughter teaching duo who took an unlikely path to the classroom, beginning their teaching careers with emergency certifications. 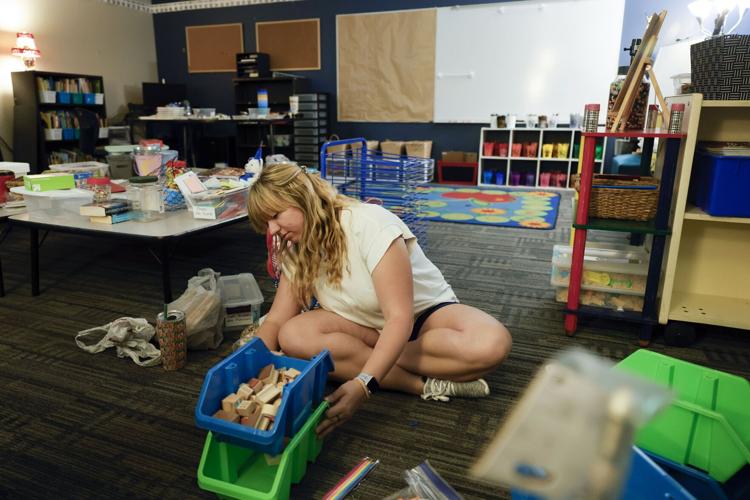 Second-grade teacher Abigail Steinle works to get her classroom ready last week at Grove Elementary School in the Union Public Schools District. An ongoing teacher shortage will require thousands to step into the void left by those leaving the profession through resignation and retirement. 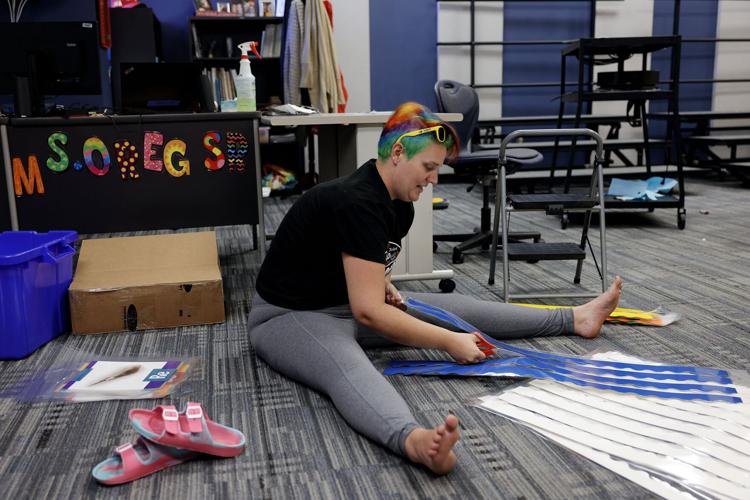 Music teacher Lorin Rogers works in her classroom at Grove Elementary School on Thursday in Tulsa. 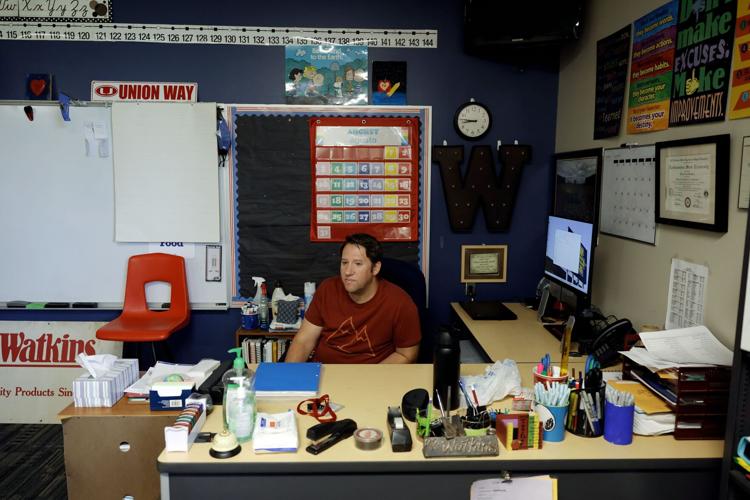 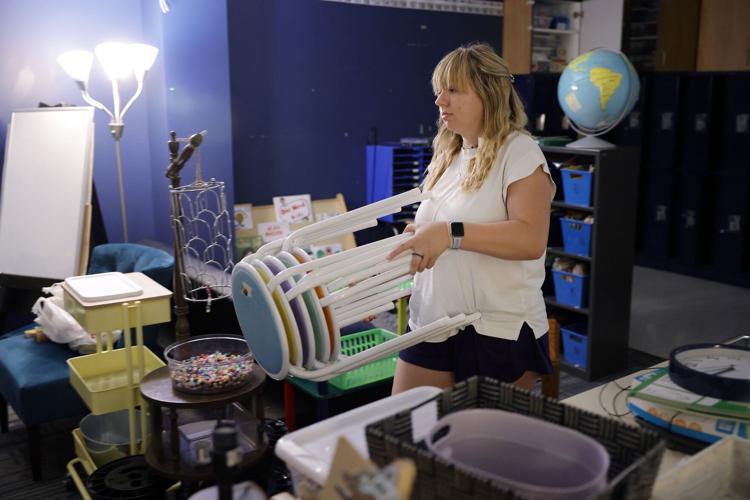 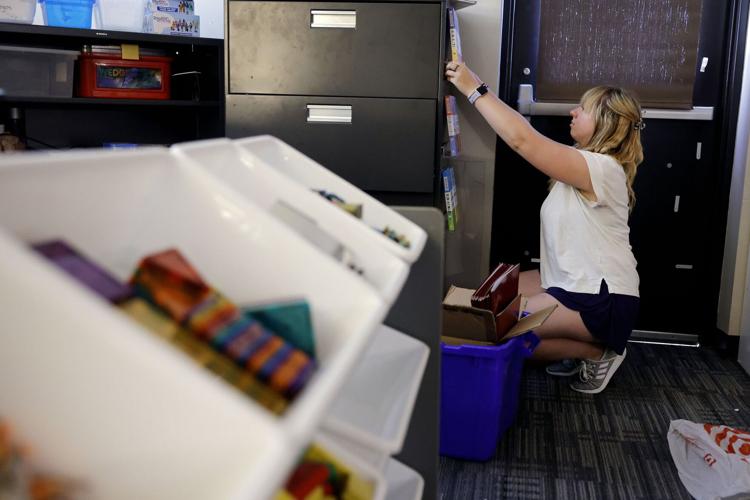 Year in and year out, thousands of Oklahomans and new transplants are having to step into the void from teachers leaving the profession through resignation and retirement.

For 2022-23, students at three different Union Public Schools sites will be the beneficiaries of a father-daughter duo who tried their hands at teaching amid the ever-expanding shortage — and ended up finding work they love.

“I never really felt a call to teaching — my daughter dragged me into it,” said Andy Ash, laughing. “I worked in finance jobs for 20 years.”

According to new data obtained from the Oklahoma Teachers’ Retirement System, summertime retirements of teachers from May until this point in August number 1,973. By comparison, 2,205 Oklahoma teachers retired during the same period in 2021, 1,600 in summer 2020, and 1,622 in summer 2019.

A district spokeswoman said parents should be assured that every classroom without a permanent teacher will be covered when TPS starts classes Thursday — and among those substitute teachers will be Tulsa school board President Stacey Woolley, Superintendent Deborah Gist and other district office administrators who are certified by the state to teach.

Jenks, meanwhile, is still searching for one more special education teacher to fill a vacancy and a spokesman said the district is still really hurting for paraprofessionals who assist special-needs students.

And Union had nine certified openings — for four special education and one second-grade teacher, one librarian, two psychologists and one speech pathologist.

For more than a decade, the state’s public schools have grown increasingly reliant on filling teaching vacancies with nonaccredited teachers, and this year is proving no exception.

When no certified candidates are available to fill a position, a school superintendent can turn to the Oklahoma State Board of Education for permission to obtain an emergency certification to allow an individual with a bachelor’s degree to be employed as a teacher for up to three years before they complete the education or training requirements for regular or alternative certification.

The Oklahoma State Board of Education has approved 1,892 emergency certificates, including 726 renewals, since June 1.

Pawhuska Superintendent David Cash said his district will be applying for one after a teacher gave notice on July 20 to move to Missouri and make more money as an electrician.

Cash was able to find someone he thinks could be a great fit for the Osage Country district, but she would need an emergency certification to start teaching when classes resume there Aug. 25.

Three years ago, Ash and his daughter Emily Overby began their teaching careers with emergency certifications at Tulsa Public Schools.

But their unlikely path to the classroom actually began a few years earlier when Overby returned home from her freshman year of college unsure she wanted to continue because she still lacked certainty about her future career path.

Ash said he made her a deal — go back to school and earn a bachelor’s degree and he would do the same.

“I had an associate’s in paralegal I had never used, and she always wanted me to go back to school. She graduated from TU (the University of Tulsa) and I did mine online — so hers is more prestigious than mine — but we both got degrees,” Ash said.

Overby wasn’t through with her dear old dad yet.

She graduated with a psychology degree and thought she needed to try working a while to figure out her ultimate career choice.

“I knew it was a problem in Oklahoma that we don’t have enough teachers wanting to stay in the classroom,” Overby said. “And over the years, I noticed my dad was getting more and more unhappy. I was like ‘Why not use your business administration degree you spent so much time and money on in a different way?’”

Overby has since completed a master’s degree in education and Ash has settled into his new career as a math teacher, even winning his Tulsa elementary school’s award for his students’ academic growth demonstrated on a district-level math assessment.

Both set out to find different teaching assignments this year and just by coincidence, both ended up leaving TPS for in-demand, not-easily-filled positions in the Union district.

Ash will teach math at the Union 6th/7th Grade Center and Overby will split her time as an instructional coach for English learners at Rosa Parks and Roy Clark elementary schools.

Their messages for professionals who might consider a career change?

“I would tell them the same thing I told my dad: The kind of jobs you’re working right now — corporate America jobs — will always be there. If you take the leap of faith and you don’t like it, you can always go back. But even that one year you teach could make a massive difference in a child’s life or make a difference in that school, just by showing up and teaching. There is a massive domino effect possible,” Overby said.

As for Ash, the message is all about job satisfaction.

He recalled a bittersweet moment during his first year of teaching, when a student came to his classroom one afternoon to tell him it was her last day at school because her family was leaving the country.

She had a gift for him.

“She gave me a plaque that says: ‘Teaching is your superpower,’” he said, pausing for a moment. “I’m not a little guy and I’m not what I would call sensitive, but after she left, I became misty-eyed and had to compose myself for a moment.

“To me, it mattered. The students, when they get it, it’s so satisfying because you helped them overcome a challenge to learn something.”

And, he added, compared to corporate jobs, “the time off is just amazing. The older you get, the harder it is to work those 60- and 70-hour work weeks many companies expect.”

When Rogers College Middle and High School in Tulsa opens for classes on Thursday, 38 new teachers will be on campus, not counting one position filled, at least temporarily, by a substitute.

On top of having to replace about 20 teachers at the end of the 2021-22 school year, Principal Nikki Dennis had to fill additional positions for the coming school year to accommodate student enrollment increases, particularly in sixth grade.

Of the 20 teachers who left, Dennis said only a handful remain in the education field. Some retired or left the profession because of teacher pay levels, commuting expenses and even lingering concerns about COVID-19.

Some of Rogers’ new faculty members are teachers lured away from other schools and even states, but 15 are first-year teachers and five of those have substitute teaching experience.

Dennis recruited alongside other TPS principals at Tulsa’s Juneteenth celebration, and sought out retirees and possible career-changers, touting benefits not necessarily available elsewhere in the private sector, like getting a fresh start every August.

Hiring 38 new teachers is no small feat, but it’s still critical to be selective, she said.

“I don’t want just anyone coming into the classroom,” Dennis said. “There are people out there who are looking for a career change, and education is a great way to make a difference in the world. We don’t get paid very much, and there is a lot of pressure on us, but there are some benefits to being a teacher.”

All the top issues heading into this year's midterms

All the top issues heading into this year's midterms

Rescuers flock to save parrots stranded by Ian

Rescuers flock to save parrots stranded by Ian

Andy Ash and Emily Overby are a father-daughter teaching duo who took an unlikely path to the classroom, beginning their teaching careers with emergency certifications.

Second-grade teacher Abigail Steinle works to get her classroom ready last week at Grove Elementary School in the Union Public Schools District. An ongoing teacher shortage will require thousands to step into the void left by those leaving the profession through resignation and retirement.

Music teacher Lorin Rogers works in her classroom at Grove Elementary School on Thursday in Tulsa.