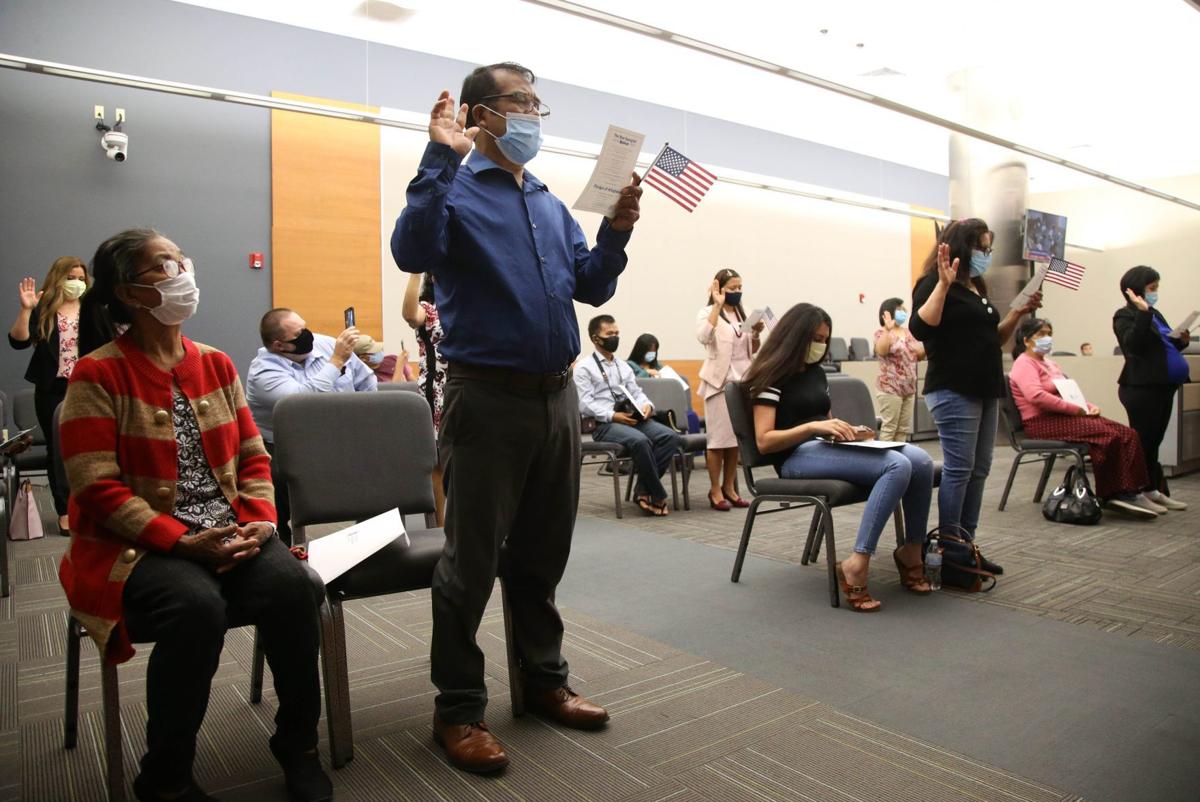 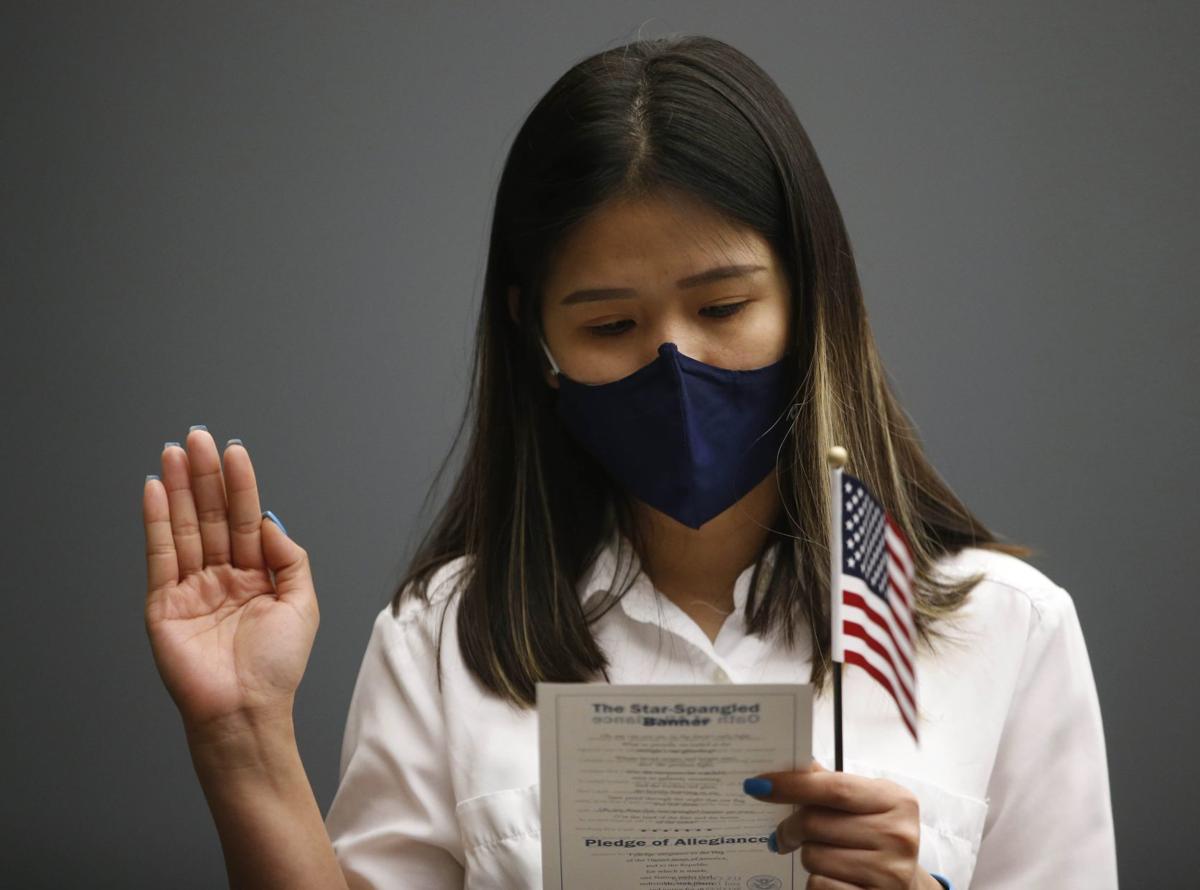 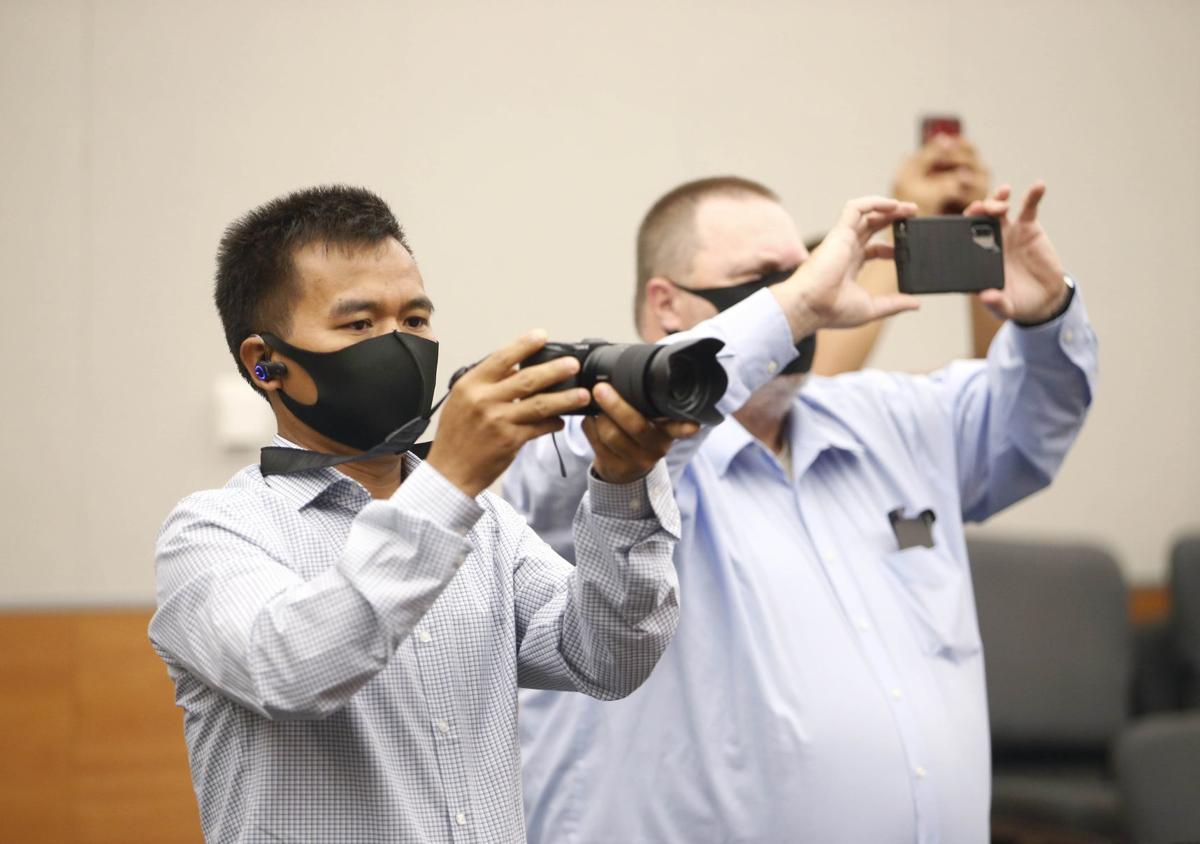 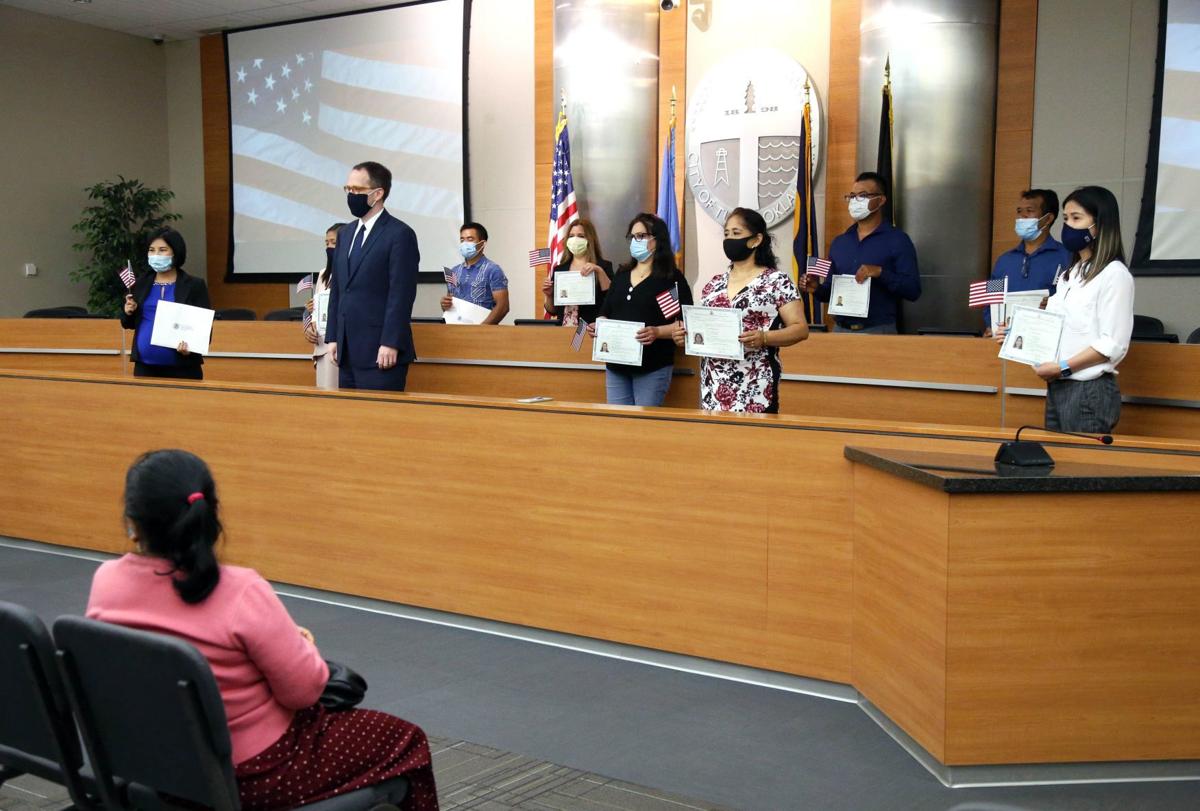 New U.S. citizens stand with Tulsa Mayor G.T. Bynum for a photo as they take part in a naturalization ceremony at City Hall on Thursday. MATT BARNARD/Tulsa World 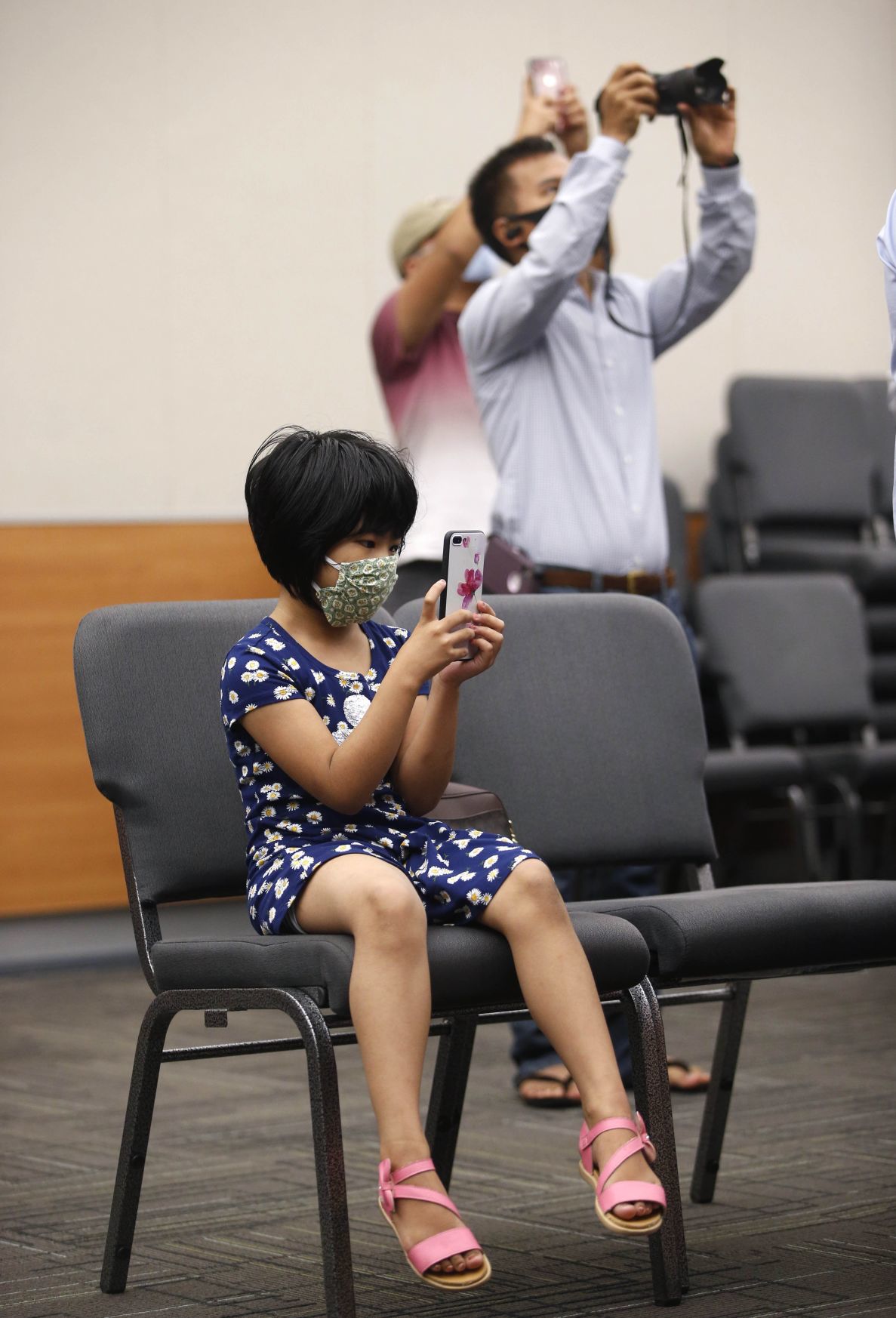 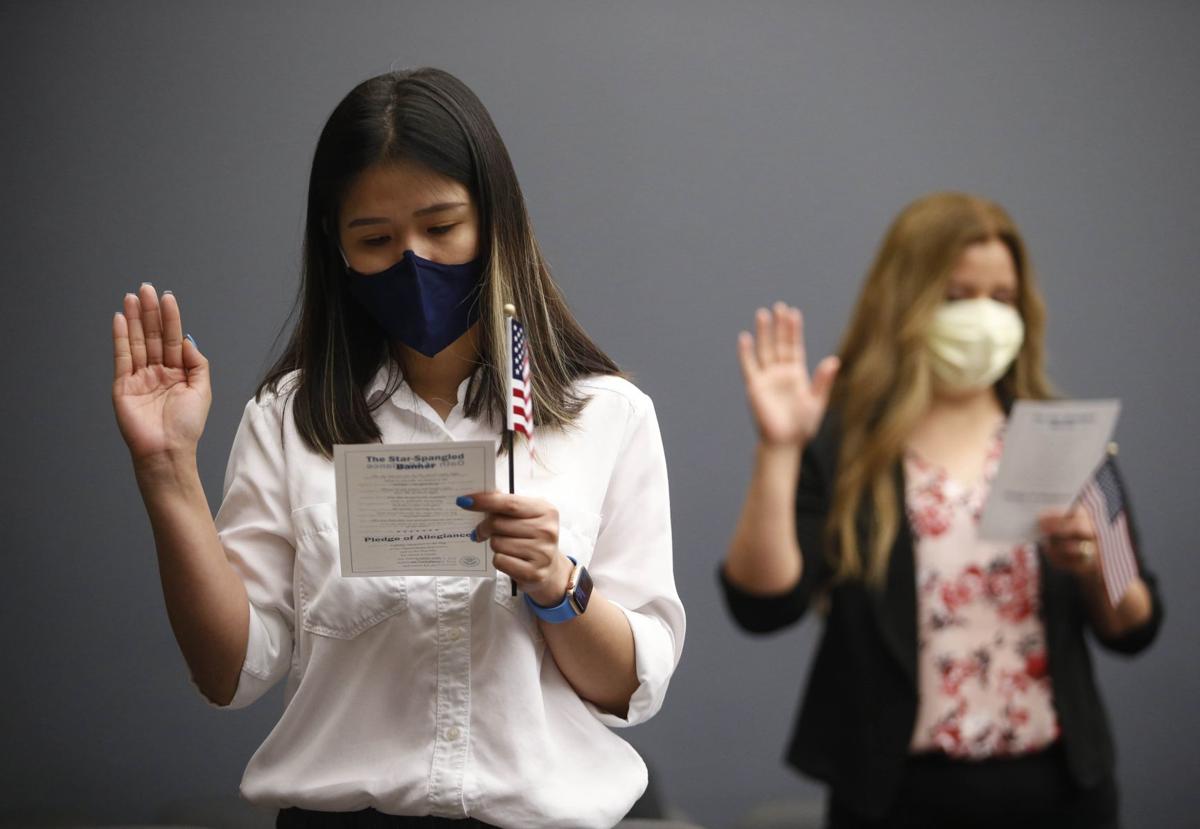 New U.S. citizens stand with Tulsa Mayor G.T. Bynum for a photo as they take part in a naturalization ceremony at City Hall on Thursday. MATT BARNARD/Tulsa World

Jose Salas had a broad smile on his face after he swore his allegiance to the United States.

Although he wore a face mask during the naturalization ceremony, the smile was evident in his eyes and in how his cheeks peeked out from the sides of the mask.

Salas came to the United States about 20 years ago, and he studied fervently for his citizenship during the past eight months. On Thursday, Salas was among 10 people who affirmed their allegiance during a ceremony in downtown Tulsa.

He said, interpreted through his son who shares his name, that he came to the United States to live in “a place of liberty.”

“He wanted to come for opportunity,” Jose Salas II said of his father. “He wanted to have a better life for his family.”

Salas, his fellow immigrants and their guests spread out through the Council Chamber at Tulsa City Hall to participate in the ceremony. All wore masks due to the ongoing pandemic.

People from Mexico, Iran, Vietnam and Myanmar, formerly Burma, were sworn in Thursday as Americans.

Thursday’s in-person ceremony comes after city officials and officials with the U.S. Citizen and Immigration Services halted it in March due to COVID-19.

After they took the oath, the new citizens heard from Mayor G.T. Bynum, who remarked how the U.S. is a nation of immigrants, reflecting that most families are here now due to a history of people seeking better lives.

“You sacrificed so much, you risked so much, to be here and do this,” Bynum said. “You are historic people in your families’ lives and will be for decades and centuries moving forward.”

City officials began hosting naturalization ceremonies in 2019 in partnership with the USCIS. It is part of the New Tulsans Initiative, an effort to welcome new residents and encourage civic engagement. Bynum said hosting the ceremony is “one small way” to express gratitude to the new citizens.

At least two speakers during Thursday’s ceremony specifically emphasized that voter registration information was among the packet of information that came with this milestone.

Bruce Paulin, director of the U.S. Citizenship and Immigration Services field office in Oklahoma City, acknowledged that the event was smaller and a bit different than normal.

“We are going to have a bit of a truncated ceremony, but please take the opportunity to celebrate when this is over,” Paulin said. “You’ve worked hard to get here.

The ceremony has gone through several changes in light of the pandemic. Previous ceremonies filled the council chambers to physical capacity. Now guests are limited to those taking their oath and one person to accompany them.

All people are to wear cloth facing coverings, and their temperatures are checked before entering City Hall. And groups of chairs — one for those naturalizing and one for their guest — were spaced 6 feet apart. There was no shaking of hands.

City and federal officials intend to maintain a steady schedule for the ceremony at 11 a.m. on the second Thursday of every month.

Featured gallery: COVID-19 basics everyone needs to know as the pandemic continues

Harrison is an Arkansas transplant in Oklahoma who does his best to keep Tulsa World's readers up to date on breaking news from 5 a.m. to 1 p.m. Phone: 918-581-8369