The clock is ticking on a federal grant program to improve the 61st and Peoria area through a holistic approach to crime and community. But positive gains have inspired optimism that successes in the recently christened “Hope Valley” are sustainable.

The city of Tulsa provided an update Tuesday on the status of a $503,000 Innovations on Community-Based Crime Reduction Program grant the city received from the U.S. Department of Justice in late 2016. The grant paid for a full-time police community resource officer for two years, a position the city said will continue with local funds. The grant expires Sept. 30, though the city has requested an extension until Jan. 31.

The policing focus in Hope Valley has been to bolster relationships, encourage the reporting of crimes and deter criminal behavior. Increasing availability to social services is another target for improvement in the area.

As part of the update, two research consultants presented information at the South Tulsa Community House, 5780 S. Peoria Ave., and heard feedback on initiatives and how best to carry triumphs into the future.

The Savanna Landing apartment complex — formerly called Fairmont Terrace — has consistently popped as a hotspot in crime statistics and is infamous for an execution-style quadruple homicide in 2013. The complex’s latest management now enforces a zero-tolerance policy on fights, which initially led to approximately 10 tenant evictions a month, a property representative said. The complex is also evicting residents who were involved in illegal activities, the city said.

Assaults there are down 20% to 25%, and burglaries at Savanna Landing have declined about 15%, according to statistics released in the update. In Hope Valley — the larger area from 56th to 65th streets between Utica Avenue and Riverside Drive — burglaries dropped nearly 30% and robberies about 20% — both percentages greater than the city as a whole, according to Tulsa Police Department statistics.

“The city of Tulsa overall, and other apartments across the country, could really learn a lesson in the way Savanna Landing’s handling it,” said Nicholas Corsaro, an associate professor of criminal justice at the University of Cincinnati who consulted on the research.

Carmel Steward, the complex’s property manager, said the zero-tolerance policy discourages problem tenants. They don’t want to be seen or heard, she said, and personnel have begun to notice a renewed vibe with neighbors helping each other out.

Occupancy is at 88%. She wishes it were 100% but said she would rather kick out a problem resident than boost occupancy at the expense of the rising quality of life.

“It shows that Millennia (Housing) Management cares and wants to accept you as who you are and hopefully make a change in the community,” Steward said.

Kimberly Owen, the association’s vice president, said she’s lived at the complex for almost 10 years. She refused to let her children play in the park adjacent to her building and didn’t befriend neighbors out of fear.

“Now my kids can go outside and ride their bicycles,” Owen said.

There’s a community garden from which residents can pick fruits and vegetables as they ripen next to the complex’s pool.

“We discuss gardening tactics,” she said.

The nearby Kwick Stop on 61st Street is the second grant target for improvement. Security also is in place there now, with perimeter fencing and enhanced lighting.

Brant Pitchford, supervisor with the city’s Working in Neighborhoods Department, called the Kwick Stop previously a “poster child” for how to test the city’s Chronic Nuisance Abatement Property ordinance.

The ordinance, passed in July 2018, gives the city the authority to close businesses for noncompliance. Pitchford said the city has monitored the Kwick Stop, with the most significant required change being the presence of a security officer when the store is open.

“We’re now getting feedback from the proprietor, the guy who runs the place, that the security has increased his sales,” Pitchford said. “People are coming in more because there’s security on site.”

Crime incidents reported at Kwick Stop were about 1.5 per month in 2015-2016, climbing to 2.5 a month in 2017-18. Corsaro credited that to area residents feeling able to report crime, whereas previously they wouldn’t do so.

The rate has dropped back down to about 1.5 per month this year.

But the University of Cincinnati researcher did point out that not all is sunshine and rainbows.

For example, assaults are down at Savanna Landing, but within Hope Valley they remain stable and consistent.

So the question remains: Why are so many people fighting outside the gates of Savanna Landing?

Deranda Kenmore recalls watching a scuffle spill down a staircase at Savanna Landing some years ago, with one man denting her car’s fender with the other guy’s head.

Those episodes don’t seem to play out anymore, or at least as much, Kenmore said. Savanna Landing is “tons better,” she said.

Besides fewer fights, the complex now has a weight room and an upgraded laundry facility.

And “I love the garden,” Kenmore said. “I picked my first tomato the other day.”

But she said the two playgrounds need to be upgraded and that maintenance workers appear to be “running wild” trying to fix problems. The water was mixed up in a renovated apartment, with the hot flowing into the toilet and not the shower, she said.

“They still have a long ways to go, but it’s a work in progress,” Kenmore said.

First printing of U.S. Constitution to be auctioned off

First printing of U.S. Constitution to be auctioned off 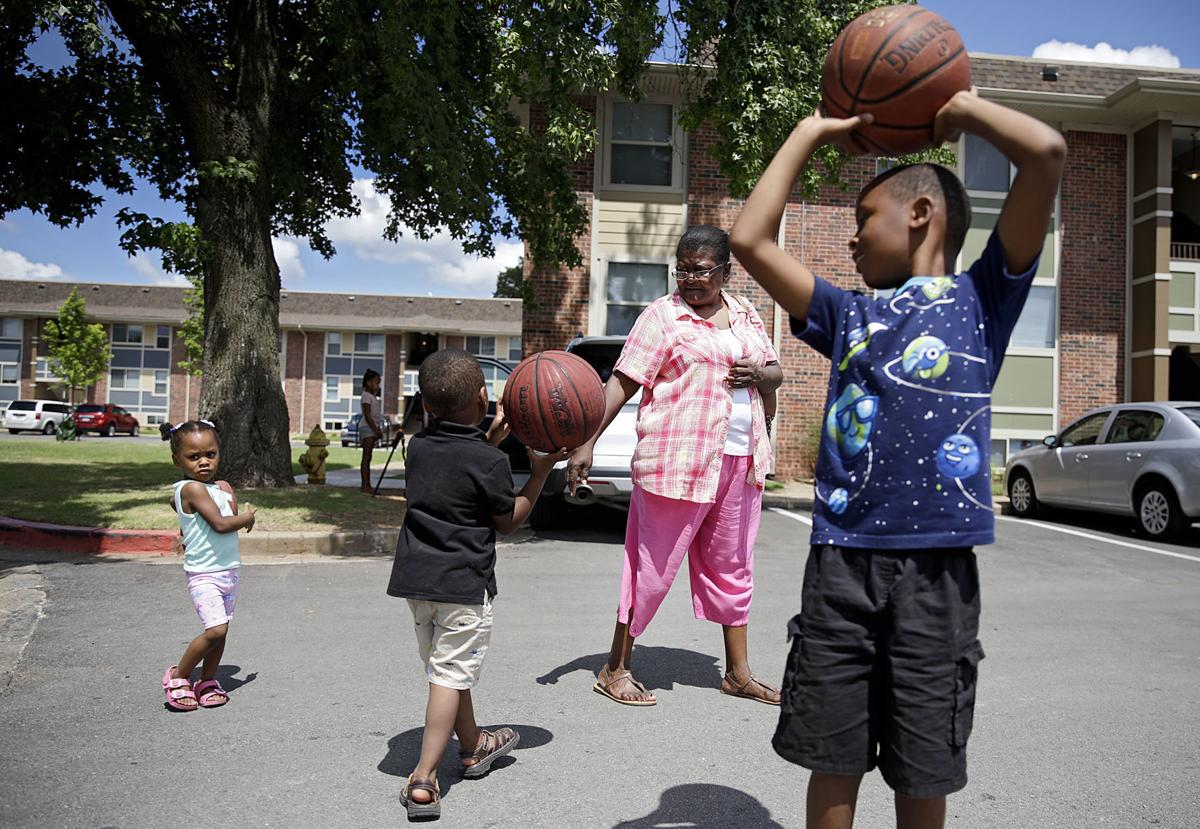 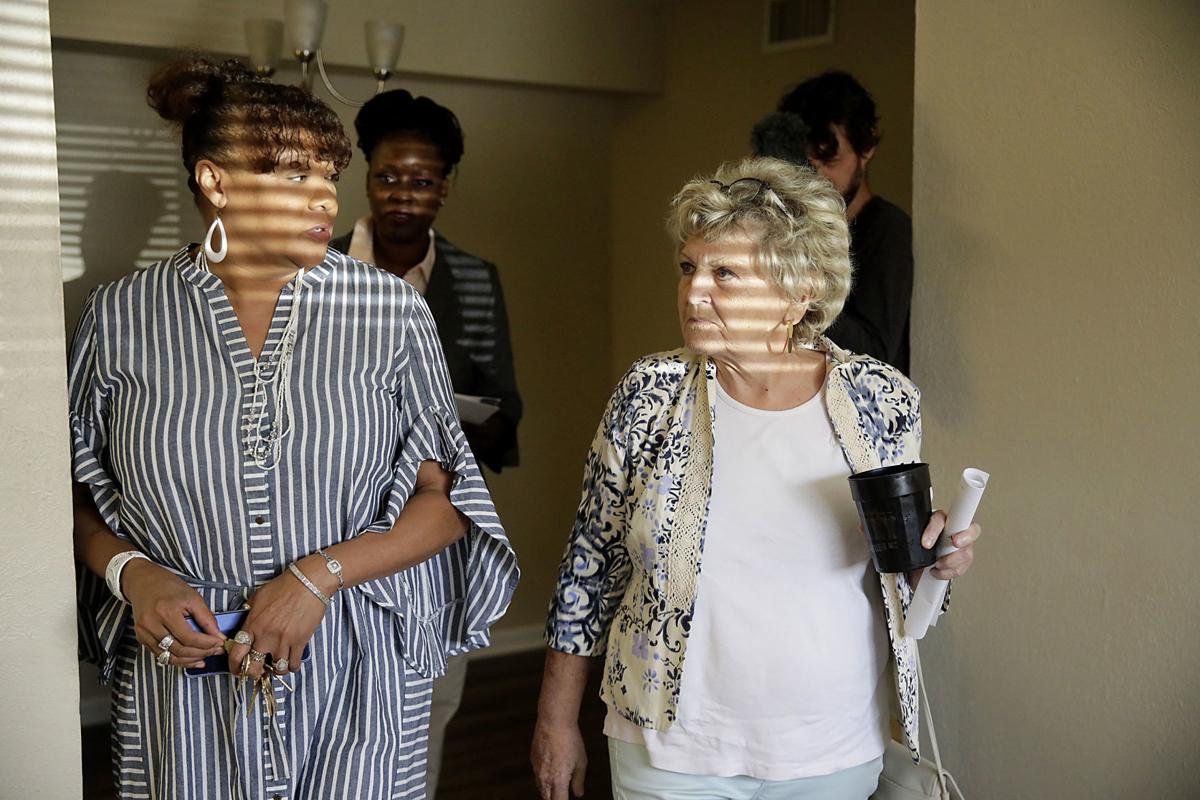 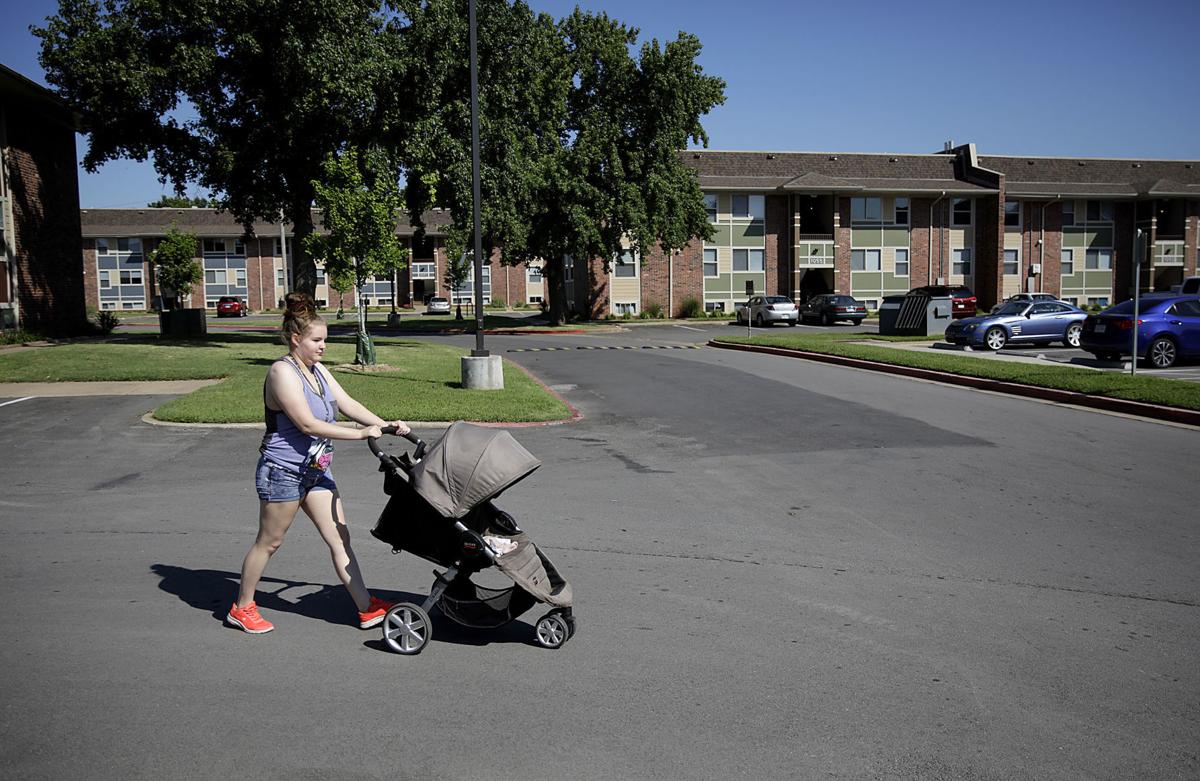 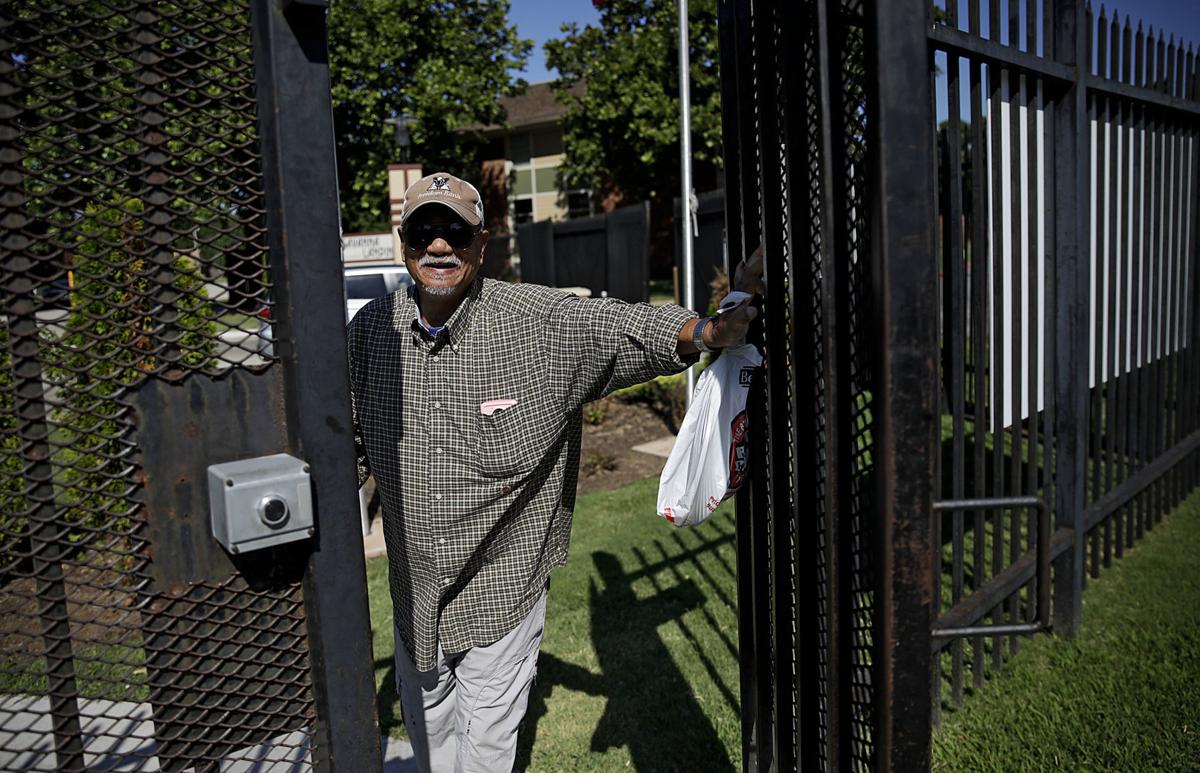 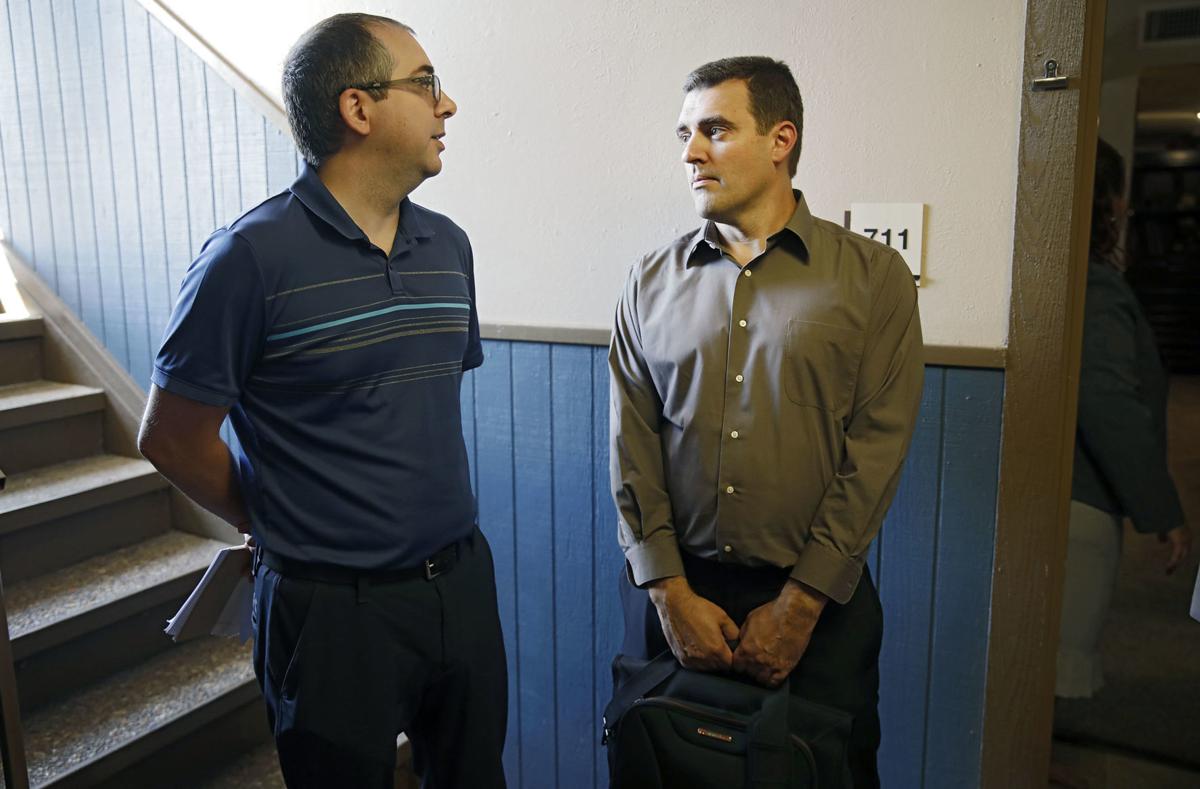 James Stark (left) with Local Initiatives Support Corp. and Nicolas Corsaro of the University of Cincinnati talk during a tour of the Savanna Landing apartments on Tuesday. MIKE SIMONS/Tulsa World 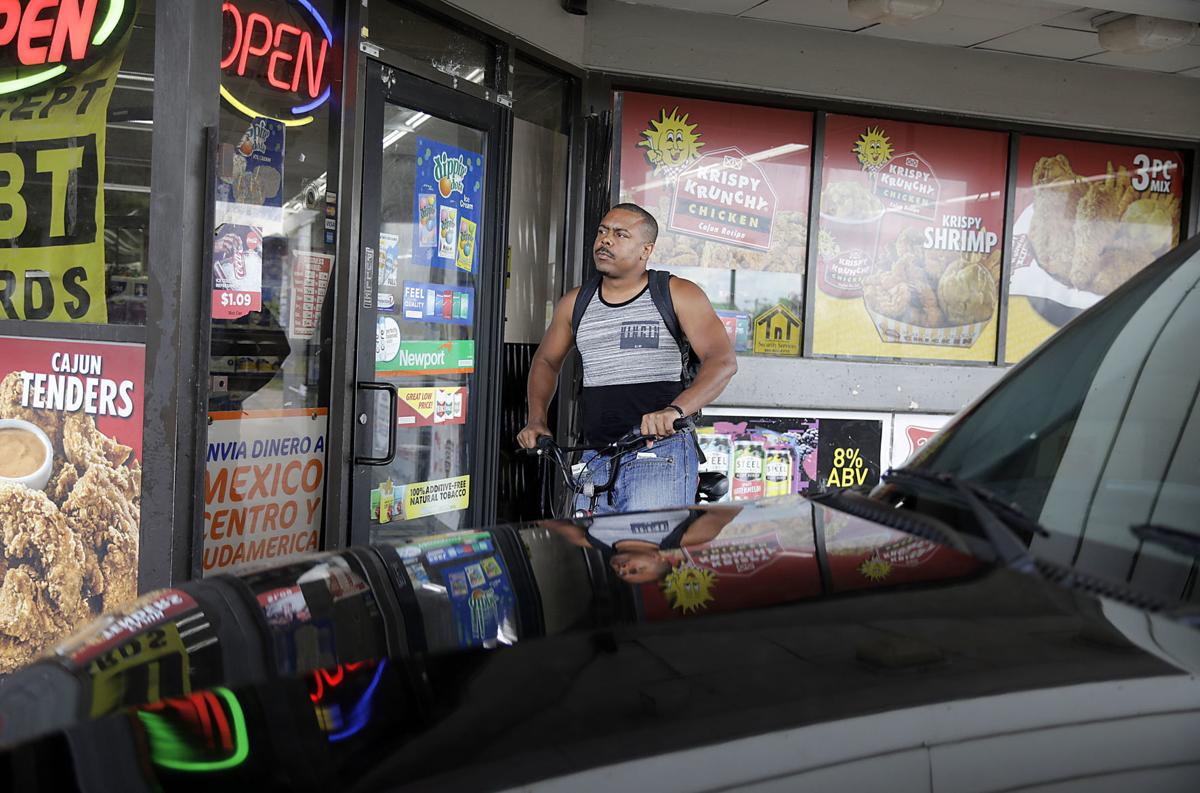 A man leaves the Kwick Stop convenience store on 61st Street just west of Peoria Avenue on Tuesday. A city official said area residents are going to the store more now that it has on-site security. MIKE SIMONS/Tulsa World