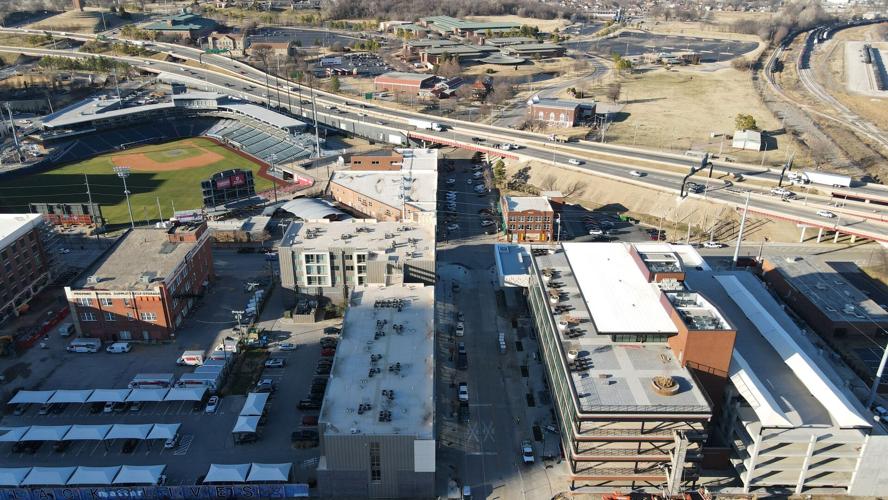 Interstate 244, the northern leg of Tulsa’s Inner Dispersal Loop, wiped out an estimated 3,000 homes and 500 businesses when it was erected. 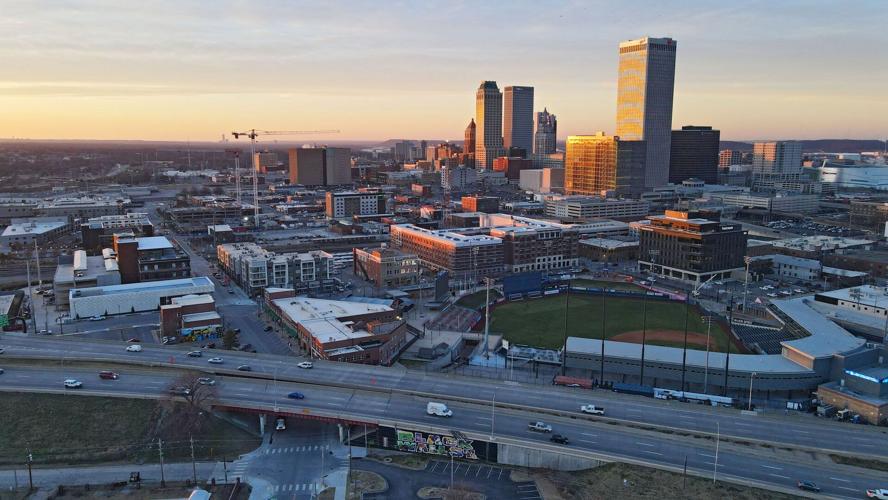 For decades, Interstate 244 — built in the late 1960s over the heart of the Greenwood business district — symbolized a physical and psychological barrier that, intentional or not, isolated businesses and Greenwood’s inhabitants from economic opportunity and prosperity. 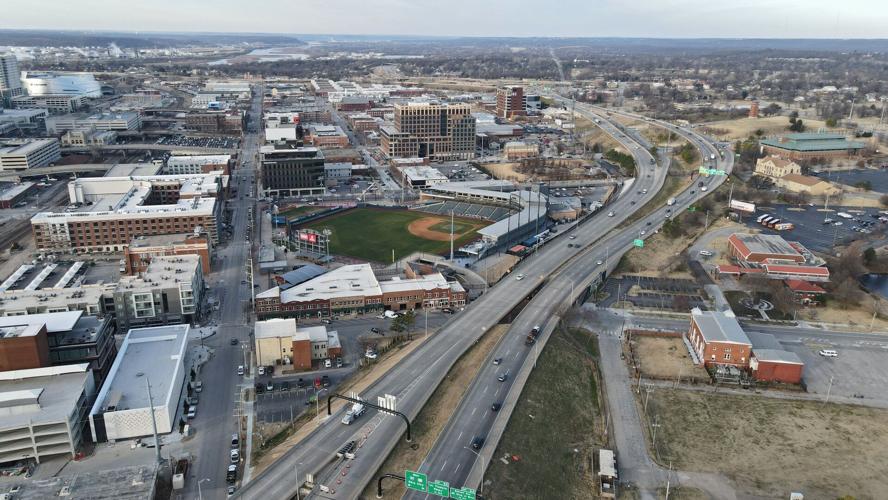 A $1.2 trillion federal infrastructure package earmarks $250 million for planning grants and $750 million to be invested in capital construction grants to reconnect neighborhoods — such as Tulsa’s Greenwood District, seen here cut by Interstate 244 — that are impacted by major highways. 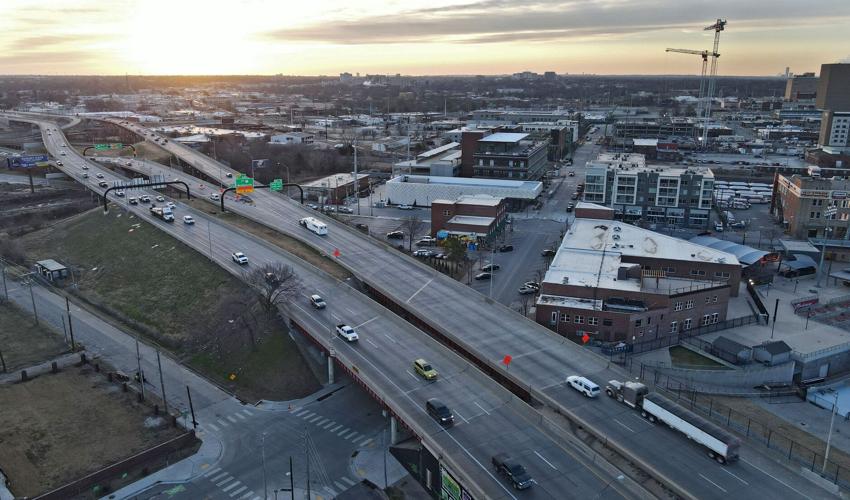 "While the people of Greenwood rebuilt again in the years after the massacre, it didn’t last," President Joe Biden said in Tulsa. "Eventually neighborhoods were redlined on maps, locking Black Tulsa out of homeownership. A highway was built right through the heart of the community."

Born in 1935 — just 14 years after the 1921 Tulsa Race Massacre — the longtime staple of the Greenwood District often laments about the northern leg of the Inner Dispersal Loop that wiped out an estimated 3,000 homes and 500 businesses by the time it was erected.

For decades, the highway — an elevated stretch of steel and concrete built in the late 1960s that runs above the heart of the Greenwood business district — symbolized a physical and psychological barrier that, intentional or not, isolated businesses and Greenwood’s inhabitants from economic opportunity and prosperity.

Pegues, who remembers when a portion of Interstate 244 once created an impasse to an entrance at Mount Zion Baptist Church, has not been the lone voice advocating for change.

Some ideas have called for closing off portions altogether and converting sections into a boulevard, forcing vehicles to use alternate routes. Others have suggested moving that portion of the highway underground.

While the many proposals may seem far-fetched or almost impossible to consider on the surface, hope is found in the $1.2 trillion federal spending package passed by Congress and signed by President Joe Biden in November that promises to pour money into America’s aging infrastructure.

The bill earmarks $250 million in planning grants and $750 million to be invested in capital construction grants to reconnect neighborhoods — such as the Greenwood District — that are impacted by major highways.

Biden acknowledged the damage highway systems have done to some communities across the United States during an appearance in Tulsa ahead of the race massacre centennial anniversary in June.

He specifically pointed to Greenwood and I-244 as an example of how transportation projects had dismantled certain neighborhoods and created racial disparities.

“While the people of Greenwood rebuilt again in the years after the massacre, it didn’t last,” Biden said during remarks inside a packed Greenwood Cultural Center. “Eventually neighborhoods were redlined on maps, locking Black Tulsa out of homeownership. A highway was built right through the heart of the community.”

According to the White House, 40% of the spending package would fund projects in disadvantaged communities through the Justice40 Initiative. Progress would be tracked through an Environmental Justice Scorecard.

If Tulsa were granted federal and other forms of funding to embark on a project that would be assessed as ambitious at best, how would this project even look?

His proposal would involve rebuilding the street grid from the Kendall-Whittier area at Admiral Place and Lewis Avenue to Gilcrease Museum Road. Land made available — some 150 acres as a result of the construction — would be transferred through a community land trust. The proposal also suggests decommissioning portions of U.S. 75 and the L.L. Tisdale Parkway, as well as sealing off the Broken Arrow Expressway from Peoria to Denver avenues.

The estimated cost of the project would be $250 million for total demolition and street grid restoration, said Brandt, who explained the proposal during a meeting with state lawmakers in September.

Tulsa would join other cities such Syracuse, New York; Kansas City; San Francisco; Seattle and Milwaukee that have been identified by the nonprofit Freeways Without Futures as locations where highways could be removed or redirected.

Currently, the majority of the Greenwood District is owned by the Tulsa Development Authority and the state’s higher education system. Efforts have been made over the years to preserve the remaining 10 brick buildings along the original Black Wall Street corridor. Those structures are owned by the Greenwood Chamber of Commerce.

Freeman Culver, president of the Greenwood Chamber, told the Tulsa World that opening up the area once again would lend itself to residential and business growth not experienced since I-244 was constructed.

“It would be a great opportunity to grow what we have with the Greenwood commercial district even more,” Culver said. “Land is the basis of all independence. “If (I-244) is removed, then the number of effects it would have on the north Tulsa and Greenwood economy would be well worth the investment.”

Despite optimism about the potential project and what it could mean for north Tulsa, there are questions left to be answered and possible complications to consider that go beyond the millions of dollars in projected costs, said Viplava Putta, transportation planning and program director with the Indian Nations Council of Governments.

“This is a section of a highway that is not just one small spur or a mile or two,” Putta said. “It is connecting U.S. 412 and Interstate 244 that carries 70 to 80,000 cars a day. Where would that traffic go if we were to do anything with that highway or segment?”

What also requires examination, said Putta, is whether the project is technically feasible. For example, how much westbound or eastbound traffic along I-244 would be affected, and who would ultimately benefit.

Either route, the plan says, would add roughly three additional miles to a trip, as opposed to motorists traveling through downtown Tulsa.

“And so you’re talking about, at, you know, highway speeds, this may add three minutes to five minutes to someone’s drive,” he said. “From a regional perspective, no one is even going to notice that.”

Brandt also mentioned that residential housing, retail and other developments could be built on the freed up space, which would be a net gain for Tulsa’s economy.

The Oklahoma Department of Transportation has been here before. A 3.5-mile stretch of the Interstate 40 Crosstown Expressway in Oklahoma City was relocated by ODOT because of structural issues.

That project is often cited as a guide to justify the removal of I-244. But Oklahoma Secretary of Transportation Tim Gatz indicated during the September meeting that the state has already made significant final investments in improving and maintaining all legs of the IDL to the tune of $240 million. Along the northern leg alone, some $70 million has been spent, he said.

Deconstructing any sections where money has already been allocated would be difficult, considering work has been ongoing for parts of the last 15 years.

“When you look at Interstate 244 and the function of the IDL in downtown Tulsa, access into the area is critical,” said Gatz, who explained that it would take years to resolve any changes to routes. “If you were to take that traffic and push it onto other parts of the network in Tulsa, I’ll tell you the network right now is not at a capacity level to support that traffic diversion.”

State Rep. Regina Goodwin, D-Tulsa, has been holding panels and information sessions regarding the Interstate 244 situation. As a child of Greenwood, she has supported the idea of eliminating the section for good in a practical way.

“I don’t see how we cannot pursue it,” said Goodwin. “That is one of the freeways that destroyed houses and businesses. It was totally unnecessary. We have the money to do it. We have the ingenuity to do it. The question is: Is the will there?”

What’s paramount, said Goodwin, is for Oklahoma to finally “address the harm” caused by Interstate 244’s presence, particularly after the interim study presented earlier this year acknowledged reservations that were raised by legislators.

“If we’re really talking about reconnecting communities, it’s not just folks who live in Greenwood who’ve given thought to this. It’s not just benefiting one side of the community,” she said. “People who live in this city should benefit from the dynamic changes that take place.”

Photos: Sights of 244 and Greenwood

A history of the 1921 Tulsa Race Massacre

Answering the call: Oklahoma teacher shortage requires thousands to step into the void every year

Jeffrey Price Krigel, 35, was charged with one count of first-degree rape last year on allegations he raped a woman while she was unconscious and therefore unable to legally consent.

Michael Overall: What Oklahoma City can teach Tulsa about losing

Tulsa’s Isaiah Jarvis gets hit in head by pitch, then hugs distraught pitcher who did it in touching display of sportsmanship

With a nationwide audience watching, a Tulsa player offers a hug and words of encouragement to an opponent after being hit with a pitch.

Prosecutors contended that Thomas Daniel Johnson, 49, engaged in a sexualized-relationship using text messaging when the minor was 11, 12 and 13 years old, thus committing the crime of attempted coercion and enticement of a minor.

John Jacobs Ahrens, 59, pleaded guilty nearly a year ago to sending emails containing the threats to a local television station in May 2021 and June 2021.

It will feature new Amazon "Just Walk Out" technology, which offers a checkout-free experience for customers.

The mayor went on Facebook on Tuesday to express his support for District 6 Councilor Connie Dodson in next week's council election — a day after he said he did not plan to get involved in the races.

Late Sapulpa native and OU grad Thomas Blakemore helped write a new constitution that respected Japanese culture, and he is credited with helping the nation transition to democracy and a modern economy.

Detour created after bridge on Katy Trail destroyed by fire, according to Tulsa River Parks

Extensive damage to the century-old wooden bridge was discover this weekend, officials said Monday. A detour can be found at Third Street between 41st and 49th West avenues.

Why Prince William is heading to the United States

Could life on Earth survive if there were more moons in the sky?

Could life on Earth survive if there were more moons in the sky?

Interstate 244, the northern leg of Tulsa’s Inner Dispersal Loop, wiped out an estimated 3,000 homes and 500 businesses when it was erected.

For decades, Interstate 244 — built in the late 1960s over the heart of the Greenwood business district — symbolized a physical and psychological barrier that, intentional or not, isolated businesses and Greenwood’s inhabitants from economic opportunity and prosperity.

A $1.2 trillion federal infrastructure package earmarks $250 million for planning grants and $750 million to be invested in capital construction grants to reconnect neighborhoods — such as Tulsa’s Greenwood District, seen here cut by Interstate 244 — that are impacted by major highways.

"While the people of Greenwood rebuilt again in the years after the massacre, it didn’t last," President Joe Biden said in Tulsa. "Eventually neighborhoods were redlined on maps, locking Black Tulsa out of homeownership. A highway was built right through the heart of the community."