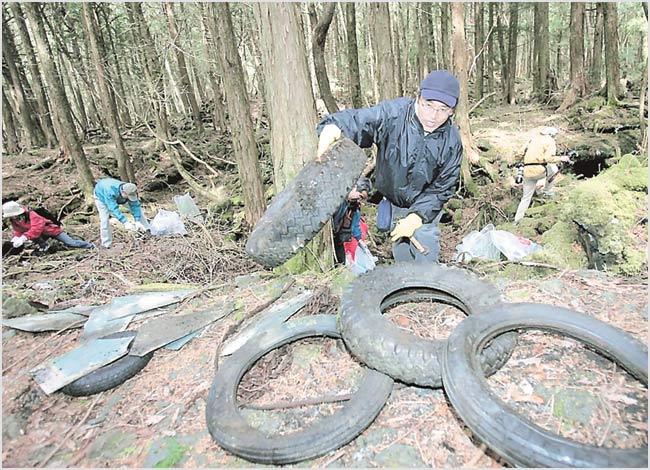 Fujisan Club members collect tires and other garbage during their outing in Fujikawaguchicho, Japan, at the foot of Mount Fuji in April. Fuji, at left, the pride of the nation and symbol of the Japanese soul, is a huge garbage dump. Nobody knows how much trash is buried there, but Fujisan Club, which conducts periodic clean-ups, says it collected 85,260 tons of illegally dumped garbage from the mountain’s slopes from April 2006 until March. 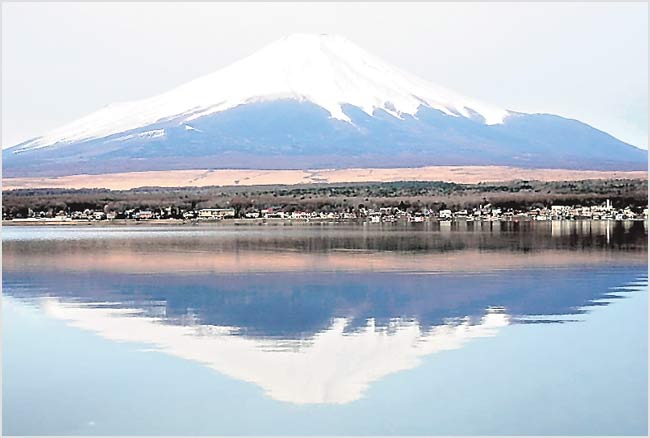 FUJIKAWAGUCHI, Japan -- If you look up from the forests at the foot of Japan's Mount Fuji, the volcano's graceful slopes rise into the distance and peak in a nearly symmetrical, snowcapped cone. If you look down in the forests, however, you see something much less elegant: trash. Lots of it. Just below the surface of leaves and topsoil are discarded microwave ovens, construction debris, broken office furniture. Even rusting refrigerators. Mount Fuji, the pride of the nation and symbol of the Japanese soul, is a huge garbage dump. "We've found everything from household trash to broken TV sets and other appliances," said Mayumi Wakamura, who heads periodic cleanups of the mountain. "Sometimes we find hazardous materials like leaky old car batteries." Nobody knows how much trash is buried on Fuji, but Wakamura's Fujisan Club says it collected 187,000 pounds of illegally dumped garbage from the mountain's slopes in the 12 months through March. Fuji's garbage problem is a potent symbol of the general environmental destruction wrought by decades of industrialization in a nation with one of the highest population densities on Earth. The sorry state of Japan's most-heralded mountain could also be a stumbling block in Japan's campaign to get the United Nations to list Fuji as a World Heritage site. In the mid-1990s, activists and local officials asked officials from the United Nations Educational, Scientific and Cultural Organization to evaluate informally Fuji's chances for joining the list, said Fujisan Club official Naoko Aoki. " 'Not good' was the answer, and trash management was one of the reasons," she said. That spurred some Japanese to action. The Fujisan Club -- "Fuji-san" means Mount Fuji in Japanese -- was formed in 1998 and now has about 1,100 members. The group organizes regular, all-day cleanups of the mountain. Fuji's trash ills run deep. About 200,000 Japanese and foreign tourists climb the 12,388-foot mountain every year, and many have found foul toilets at way stations and garbage scattered along the paths. Government officials and activists agree the problems along the paths are now largely under control. The real problem, they say, is the trash dumped around the foot of the mountain by businesses and people who live nearby. On a recent cleanup at the bottom of Fuji, the only visible garbage was the odd spray can or plastic bag. But when volunteers cleared away leaves and topsoil, some were shocked. "I came here thinking we'd see bits of trash just lying around that we could easily pick up," said software developer Koji Nonaka, 43. "But they say that some of this stuff we got today had been there for 20 or 30 years. We really had to dig to get it out." The illegal dumping is hard to stop. "It's pretty easy for someone to come and dump trash on the roadside without being seen," said Fujisan Club official Eishiro Sato. Illegal dumpers are trying to avoid Japan's hefty garbage collection fees, he said. Throwing out an appliance like a refrigerator, say, can cost about $60, while businesses have to pay for all of their trash pickups. Local governments have arranged for special patrols and set up surveillance cameras. But education may be the key, some say. "Picking it up is not enough -- people have to learn not to create so much in the first place," Ken Noguchi, mountaineer and environmental activist, told volunteers over the Internet in mid-April from Mount Everest, where he led an extensive cleanup campaign. Noguchi, who works with the Fujisan Club on Fuji cleanups, came down from Everest in late May with 1,100 pounds of garbage. Despite the trash woes, Japan is stepping up its campaign to get Fuji on the UNESCO list. In January, the government announced it was adding Fuji to the list of tentative Japanese candidates for the World Heritage Committee for consideration at a meeting this month in New Zealand. Both UNESCO and government officials agree trash at the mountain will not decide Fuji's status. The key issue is how unique a place is. Long a site of worship and the subject of poetry and paintings -- perhaps best exemplified by Katsuhika Hokusai's famous 19th century woodblock print "Great Wave Off Kanagawa" -- Fuji has a prominent place in Japanese cultural life that gives it the uniqueness sought by UNESCO, government officials say. For some volunteers like Shinichiro Hazama, a 20-year-old university student, that prospect gives the cleanup an extra degree of urgency. "Becoming a cultural property would make Mount Fuji a symbol of Japanese culture around the world. I'd hate for people to see the trash around here and think it means that Japan is a culture of garbage," he said. Still, many volunteers have mixed feelings, worrying a World Heritage designation could mean more tourists, more traffic and more trash -- problems other such sites have had to face. Even Everest, a forbidding mountain that requires special gear to climb, is thought to have about 50 tons of trash on its slopes. "The trails to the top can be so jam-packed in the summer that you can hardly move," Aoki said. "I hope that's not a sign of the future we would have to look forward to."

Two men were killed in a two-vehicle crash in Mayes County on Saturday night, the Oklahoma Highway Patrol said.

With Oklahoma plunging into an especially severe ragweed season while the COVID-19 pandemic continues, experts want sufferers to know when to simply take allergy medicine and when to get tested for the virus.

Fujisan Club members collect tires and other garbage during their outing in Fujikawaguchicho, Japan, at the foot of Mount Fuji in April. Fuji, at left, the pride of the nation and symbol of the Japanese soul, is a huge garbage dump. Nobody knows how much trash is buried there, but Fujisan Club, which conducts periodic clean-ups, says it collected 85,260 tons of illegally dumped garbage from the mountain’s slopes from April 2006 until March.