Inside Oklahoma's execution chamber: What happens in the small, dark room
0 Comments
Share this
{{featured_button_text}}
1 of 2 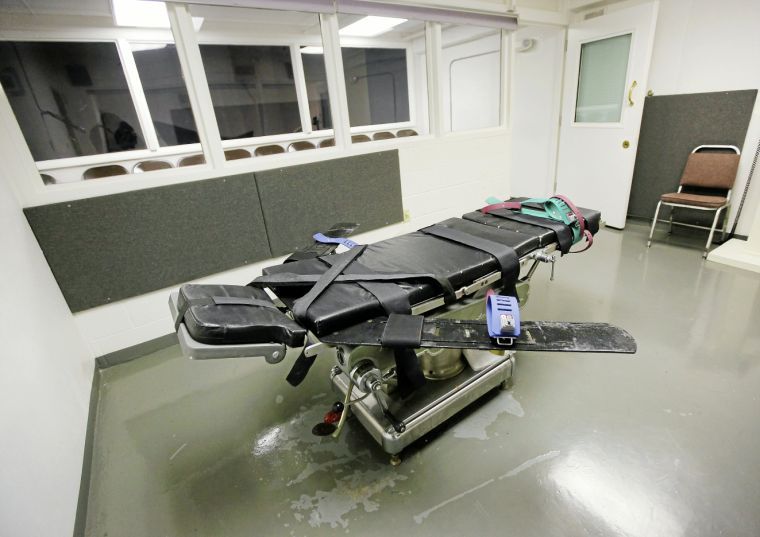 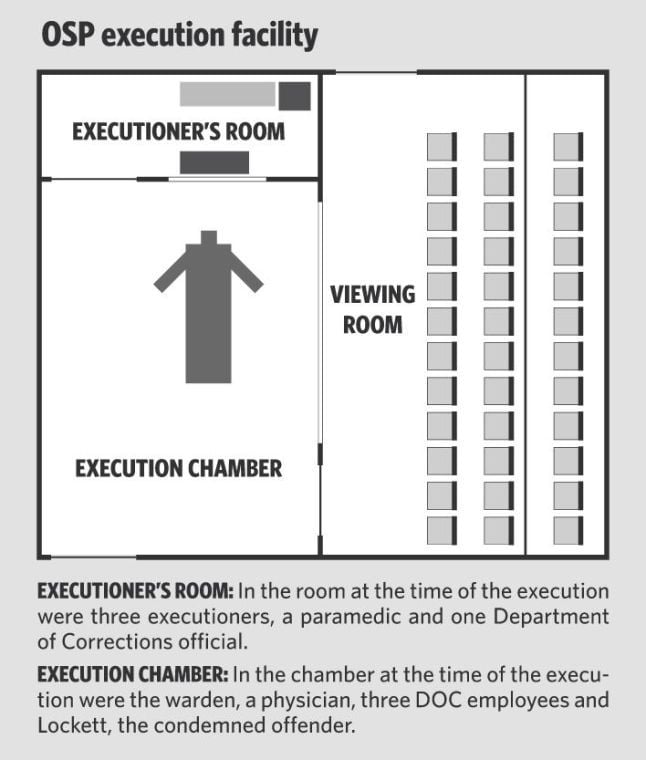 Related story: Director says DOC intends to be ready for next scheduled execution

The room where Oklahoma’s three executioners have carried out their lethal duties since 1992 is the size of a walk-in closet and so dimly lit they are provided a flashlight to see, according to court records.

Cleaning supplies have been stored in the “drug room,” where executioners administer the lethal drugs. A small window in the door provides only a partial view of the inmate being executed. If something goes wrong, the executioners stick colored pencils through holes in the drug room wall to communicate with the doctor and others in the death chamber.

Depositions by Department of Corrections officials and affidavits by attorneys who toured death row at the Oklahoma State Penitentiary describe in detail the cramped, dark and isolated conditions inside the execution chamber. The documents are part of past legal challenges to the state’s lethal injection process.

The Department of Corrections is renovating the execution chamber to address issues raised following the botched execution of Clayton Lockett on April 29. The agency also is revising its lethal injection protocols to comply with recommendations made by a Department of Public Safety investigation of Lockett’s 43-minute execution.

Department of Public Safety Commissioner Michael Thompson said in a Sept. 4 press conference that the state has had no previous problems with its executions.

“For almost 25 years, 110 consecutive times, it did work. This time, obviously, it didn’t work this time, or we wouldn’t all be sitting here today,” Thompson said.

However, records indicate that several past executions have not gone as expected.

In an affidavit for a federal challenge to the state’s death-penalty process, an attorney with the Oklahoma Indigent Defense System described her visit to the prison on June 8, 2006. The attorney, Janet Chesley, stated she was waiting at the entrance to H unit, where death row is housed, to visit with clients.

“While I was waiting, I saw the guard at the entrance to H-Unit point to a spot on her desk and ask the trustee to clean the spot because she believed it to be blood from a recent execution,” Chesley’s affidavit states.

“The guard said to me that she thought the blood was left over from the movement of a body after a bad execution,” states Chesley, who is no longer with the Oklahoma Indigent Defense System.

One week earlier, Oklahoma had executed 74-year-old John Boltz, the oldest inmate put to death in state history, according to news reports. Boltz had argued in appeals that Oklahoma’s lethal injection protocols were unconstitutional and would subject him to “a significant risk of excessive pain and suffering.”

A federal judge ultimately rejected those claims, as judges have done following other challenges to the state’s lethal injection process.

Boltz’s execution was delayed an hour because the medical team had trouble inserting an IV. Records show Boltz was executed using a single IV placed in his femoral vein, the same kind that was improperly inserted into Lockett’s body.

During a hearing in Boltz’s legal challenge, Oklahoma State Penitentiary Warden Marty Sirmons testified that the doctor carrying out the execution had difficulty establishing an IV. The doctor was not “completely familiar” with operation of the IV supplies provided by the prison, Sirmons testified.

The Department of Public Safety investigation into Lockett’s execution found that the doctor did not have properly sized needles to start a femoral IV. The report found “minor deviations” from Department of Corrections protocol during the execution but does not detail them or hold anyone accountable for them.

Problems with an IV also were documented in the 2001 execution of Loyd LaFevers, who witnesses said repeatedly convulsed during the six minutes it took him to die.

In an autopsy, an investigator with the Oklahoma State Medical Examiner’s Office stated that LaFevers’ IV “infiltrated after the first drug was administered.”

“A prison unit manager had sent two letters to the clemency board stating that this inmate needed to die,” the autopsy report states.

“The family of (LaFevers) is accusing prison officials of diluting the execution drugs or gave it (sic) in the wrong order to make this inmate suffer.”

A state law prohibits release of information identifying doctors and other medical personnel taking part in executions. The identities of the three executioners and the pharmacist who provides the lethal drugs is also secret under the law.

Witnesses said his body began bucking under the straps as he spewed the air out of his lungs. A Tulsa World reporter who witnessed the execution described it as “overwhelming, stunning, disturbing.”

Parks’ execution was the first held in the current execution chamber at the Oklahoma State Penitentiary. Death row prisoners were moved into the newly constructed death row unit in November 1991.

The chamber is actually four connected rooms: the execution chamber itself, a smaller room where three executioners are stationed, a room for relatives of the victim separated by one-way glass from a room where witnesses from the media, government agencies and the inmates’ family sit.

Chesley’s affidavit describes the executioners’ room as 4 feet by 5 feet and lit by a single florescent light with a green cover.

“I found it hard to believe that three people could fit in the room without jostling one another,” she states. “Even with the door to the execution room open, the room was dim.”

Sirmons testified that executioners are provided a flashlight but said the room has enough light to enable them to read labels.

In a 2007 deposition, a Corrections Department deputy warden said he used a flashlight in the executioners’ room “to make sure that all the drugs are in the right order.”

The deputy warden also described how executioners communicate with those in the death chamber: by sticking colored pencils through holes in the wall, where two IV lines feed into the inmate’s body.

“If you saw red, there might be possible problems,” the official stated.

Rachel Peterson, a former reporter for the McAlester News-Capital, witnessed 13 executions while working for the newspaper.

“There was one time where they said, ‘Let the execution begin,’ and the prisoner was awake for a lot longer than expected. ... Then I saw this little red plastic-looking thing; it poked in and out and then not too long later I could start seeing liquid flow through the tube. There was clearly a technical difficulty,” Peterson said.

The Department of Public Safety investigation found that “current communication methods used during the execution process are antiquated and require unnecessary multi-tasking from key personnel in the execution chamber.”

The report recommends that the Corrections Department explore ways to modernize communication between the execution chamber and the executioners’ room.

“The current processes, including the use of color pencils and hand signals, could be used as a contingency if other modern methods fail,” the report states.

Communication between Department of Corrections officials and the Governor’s Office should also be improved, the report recommends.

“DOC should research and implement methods to modernize the communication link that would allow direct, constant contact between the personnel in the execution chamber and the Governor’s Office,” the report states.

Because DOC Director Robert Patton was not inside the execution chamber, information had to be relayed by phone from the chamber to Patton outside, then to Gov. Mary Fallin’s general counsel, Steve Mullins, who then called Fallin.

Patton said last week that “major reconstruction” of the execution chamber is underway.

DOC spokesman Jerry Massie did not answer questions from the World seeking additional details about the reconstruction. Records show the agency has spent $11,000 on new doors and windows for the execution chamber. DOC notified the state Department of Central Services that it purchased custom-made, detention-grade doors and window frames from a vendor under a state law allowing agencies to waive bidding in emergencies.

DOC’s July 22 letter states the agency “must complete renovations to the execution room in order to meet the necessary timelines to carry out the next mandated execution.”

“The execution room at the Oklahoma State Penitentiary is currently under construction and the need for custom metal fabrication for two doors and window frames in an extremely short period of time has given rise to the emergency declaration,” states the letter from DOC General Services Administrator Ernest Lamirand.

Oklahoma’s next execution is scheduled for Nov. 13, when Charles Warner is set to be put to death. Warner was to be executed two hours after Lockett but received a stay after Lockett’s execution went awry.

During a press conference last week, Patton said DOC planned to be ready to carry out Warner’s execution as scheduled but would request additional time if needed. The agency must revise protocols, receive input from the Attorney General’s Office and then train employees, he said.

While it is unclear whether the renovations include expanding the executioners’ room, attorneys who have seen the room say they were disturbed by conditions there.

Kim Marks, an investigator with the Oklahoma Indigent Defense System, accompanied Chesley on the 2006 death row tour. Marks described the executioners’ room as “a walk-in closet.”

During Lockett’s execution, a paramedic was also in the room with the executioners, the Department of Public Safety report shows.

“The lack of circulation and restricted movement would not be ideal,” she said.

“The main thing I recall thinking is there’s absolutely no way to preserve the integrity of what’s happening in that closet. We have no knowledge of what they (executioners) are told or instructed. They can do anything.”Related document: Read a 2007 medical expert’s report that describes multiple failures in Oklahoma’s execution process.

Report from a federal lawsuit describes multiple failures, including conditions in the execution chamber.

An attorney describes the execution chamber

Attorney Janet Chesley toured the facility in 2006 and said she found it hard to believe three people could fit into the execution chamber.