Virus cases reach 7 million in US amid spike in heartland, home to anti-mask sentiments

How does Epic Charter Schools stack up academically? Check out student proficiency test scores
Share this
Return to homepage × 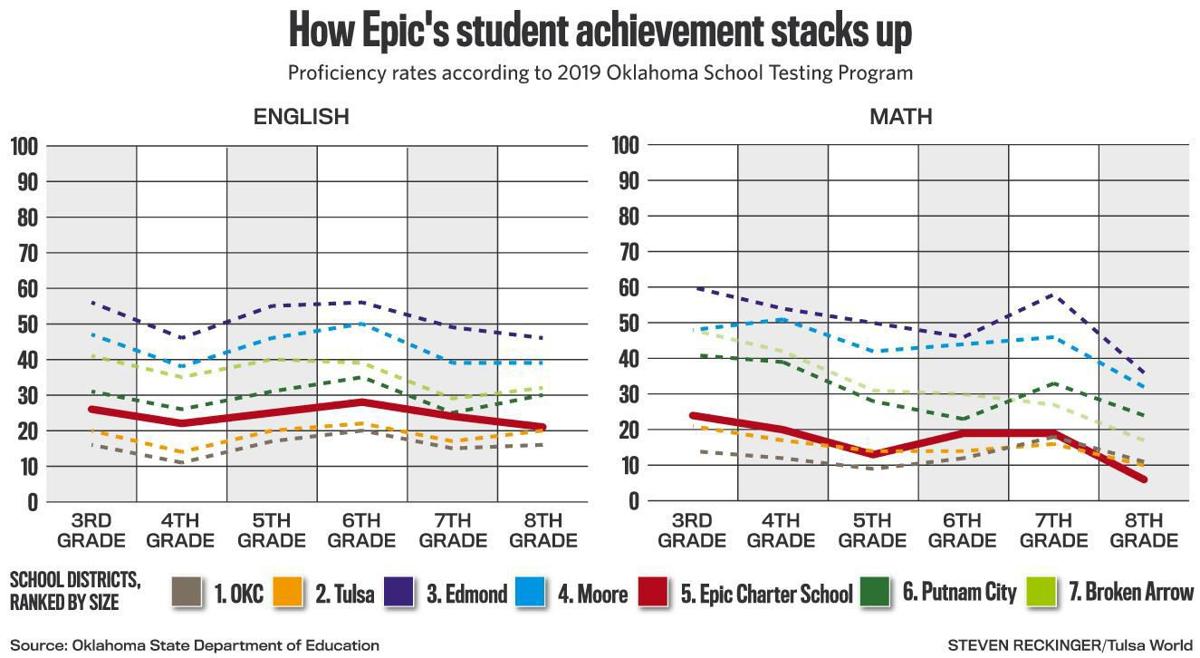 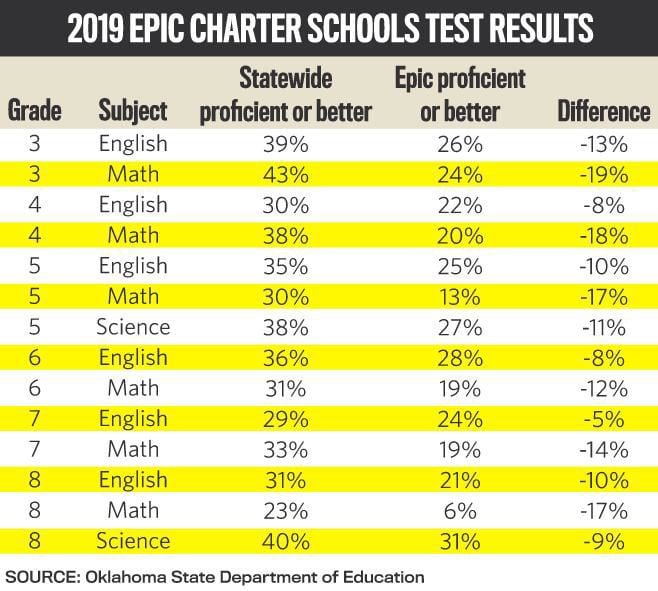 Epic Charter Schools trails statewide averages on all 14 state tests for students in grades three to eight and posted proficiency rates on four of those tests on par with or even lower than the perennially low Tulsa and Oklahoma City inner-city districts.

Epic’s new superintendent points to funding levels for his school and the lagging achievement levels of the throngs of students who have made the switch to Oklahoma’s largest online school system.

“EPIC now serves more than 24,000 students from all 77 counties of the state. The needs and challenges of those students can vary considerably. We are held to the same academic standards as traditional brick and mortar schools, but we only receive 60% of the funding they receive,” said Bart Banfield in a prepared statement.

The Oklahoma State Department of Education just released both state level and district-by-district results of 2019 state tests for students in grades three to eight.

Because of rapid growth over the last two years, Epic ranked fifth largest among all 500-plus school districts in the state, with an official student count of 21,305 for the 2018-19 academic year. So the Tulsa World compared Epic’s results with the handful of other largest districts.

Its strongest showings in student proficiency overall came in eighth-grade science, at 31%, and sixth-grade English, at 28%.

Conversely, just 6% of its eighth-graders and 13% of its fifth-graders demonstrated proficiency in math. That was 4-5 percentage points lower than Tulsa and Oklahoma City, respectively, in eighth grade and 1 point lower than Tulsa in fifth grade.

After Oklahoma abandoned the Common Core standards in use by 41 other states, the state had to adopt new academic standards. Those new standards and new tests aligned with them were implemented in 2016-17. Student proficiency rates have declined in almost every grade and subject since that baseline year for the state’s new student assessment system, three years ago.

Banfield said Epic is “constantly working to improve student performance.” To that end, Epic is currently simplifying its curriculum options to provide more standards-based curriculum that meets students where they are academically, “even if they are a grade level or more behind when they come to us,” he said.

And Epic is trying to improve its principal-to-teacher ratio to allow principals to spend more time mentoring teachers, and it is assigning each of its 500 new teachers a director of teacher development to support them in their first year.

“Over time, we believe the lower ratios and access to ongoing coaching will maximize our impact and our student results,” Banfield said.

By design, charter schools are not only held accountable to state standards but also to their sponsors or authorizers and to the parents who choose to send their children there.

One of Epic’s two authorizers is the Oklahoma Statewide Virtual Charter School Board.

• The percentage of a school’s students demonstrating proficiency at each grade level on the state tests must be equal to or above the state’s average level of proficiency, or

• The percentage of students demonstrating proficiency at each grade level on the state tests must improve by 5% or more each year since the first year of its contract.

“Achievement performance is now determined by not only the annual (state test) results but also analyzed by the results of those students who are enrolled at the school for multiple years,” Wilkinson said.

Epic has been in the headlines for other reasons since late February, when the Tulsa World broke the story that the Oklahoma State Bureau of Investigation and the U.S. Department of Education’s Office of the Inspector General were investigating Epic.

This summer, the OSBI revealed in public court records that its investigators are looking into allegations of embezzlement, obtaining money by false pretenses and racketeering at Epic. And the World obtained other public records that show the Federal Bureau of Investigation has also been probing Epic’s’ student enrollment practices and finances.