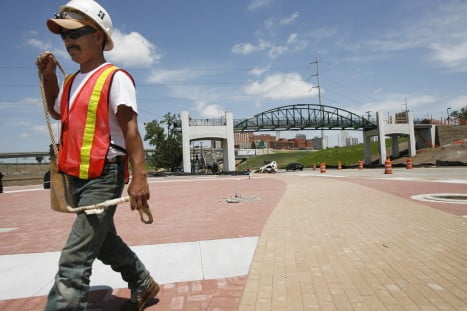 Concrete finisher Ernesto Soliz walks across the nearly complete Cyrus Avery Centennial Plaza. Behind him is the skywalk that will take visitors over Southwest Boulevard from a parking area to the plaza. 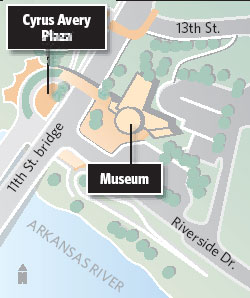 Construction will wrap up in June on the Cyrus Avery Centennial Plaza, which is a major component of Tulsa's Route 66 revitalization efforts.

But it will be the end of the year before the plaza, at the junction of Southwest Boulevard and Riverside Drive, has its centerpiece.

A larger-than-life bronze sculpture featuring Avery, the former Tulsa County commissioner who is known as the father of the Mother Road, is being crafted by celebrated artist Robert Summers in Texas.

City planner Dennis Whitaker said it is a complex piece that will be roughly 44 feet long, 18 feet wide and 14 feet at its highest point.

"It will be one-of-a-kind," he said. "It's not something that will come off an assembly line."

The sculpture, titled "East Meets West," will depict the Avery family riding in a Model-T as they encounter a horse-drawn carriage on its way from the west Tulsa oil fields.

"The level of detail will be amazing," said Whitaker, who has visited the artist's studio. "The car will be cast from an actual Ford antique from the 1920s."

Avery lobbied Congress in 1926 to make Route 66 a national highway stretching from Chicago to Los Angeles.

At the time, Tulsa was figured to be the perfect spot for the road to cross the Arkansas River because of the 11th Street Bridge, which was rededicated years ago in Avery's honor.

Although no longer a federal highway, Route 66 has been immortalized in song, film and literature and in the minds of those who have traveled it.

Tulsa's master plan to capitalize on its Route 66 roots is being pursued using $15 million from the Vision 2025 initiative, along with some third-penny, grant and private Oklahoma Centennial money.

The sculpture is a $1 million endeavor, while the plaza has a budget of nearly $2 million.

About the plaza: Originally set to be done in December, work on the plaza was delayed for several months as the city worked through right-of-way issues with the Oklahoma Department of Transportation, said Paul Zachary, Public Works Department deputy director of engineering.

Located at the east end of the 11th Street Bridge, the plaza will feature views of the bridge and contain flags of the eight states through which Route 66 passes.

A skywalk with an observation deck will take visitors over Southwest Boulevard from a parking lot to the plaza.

The 11th Street Bridge, closed in 1980 and listed on the National Register of Historic Places, is receiving about $600,000 in cosmetic work, including adding period lighting, mending cracks and restoring the parapet walls. Those improvements are scheduled to be done later this month, Zachary said.

The bridge was surveyed for possible restoration to be suitable for pedestrian use but that proved to be too expensive, Whitaker said.

"The repair work also might have taken away some of the authenticity of the bridge," he said.

Eventually, a museum adjacent to the parking area will be built to educate visitors about Route 66 through high-tech displays and inspire them to travel the 26-mile stretch through Tulsa County.

About $5 million of the Vision 2025 allocation and $3 million from the third-penny sales tax package is set aside for the museum.

Private donations will be solicited to make up the difference in the projected $10 million cost.

"We are about to begin the design work," Whitaker said. "Once that takes place, we will focus on fundraising, but there's already a lot of interest."

Untapped source of tourism: With the plaza piece of the puzzle falling into place, the other components of the Route 66 master plan are progressing as Vision 2025 money becomes available.

Gateways on the east and west sides of the city will help motorists identify the beginning of the corridor and provide a framework for future economic development.

Also, the path, which runs along Southwest Boulevard and 11th Street and an alternative route that cuts up to Admiral Place, will feature informational signs that will identify sites of historical significance and interest.

Tulsa's stretch of Route 66 will be divided into nine themed districts with corresponding streetscaping, landscaping and lighting.

The restored Meadow Gold sign is also part of the plan. It will sit atop a structure to be built this summer at Quaker Avenue and 11th Street.

Whitaker said he considers Route 66 to be Tulsa's best untapped source of tourism.

"We are already getting a lot of national attention because no other city has committed itself to this level of revitalization along Route 66," he said. "Tulsa is becoming a destination point for Route 66 enthusiasts."

Watch Now: Are RoboCops coming to your police department?

Watch Now: Are RoboCops coming to your police department?

Concrete finisher Ernesto Soliz walks across the nearly complete Cyrus Avery Centennial Plaza. Behind him is the skywalk that will take visitors over Southwest Boulevard from a parking area to the plaza.