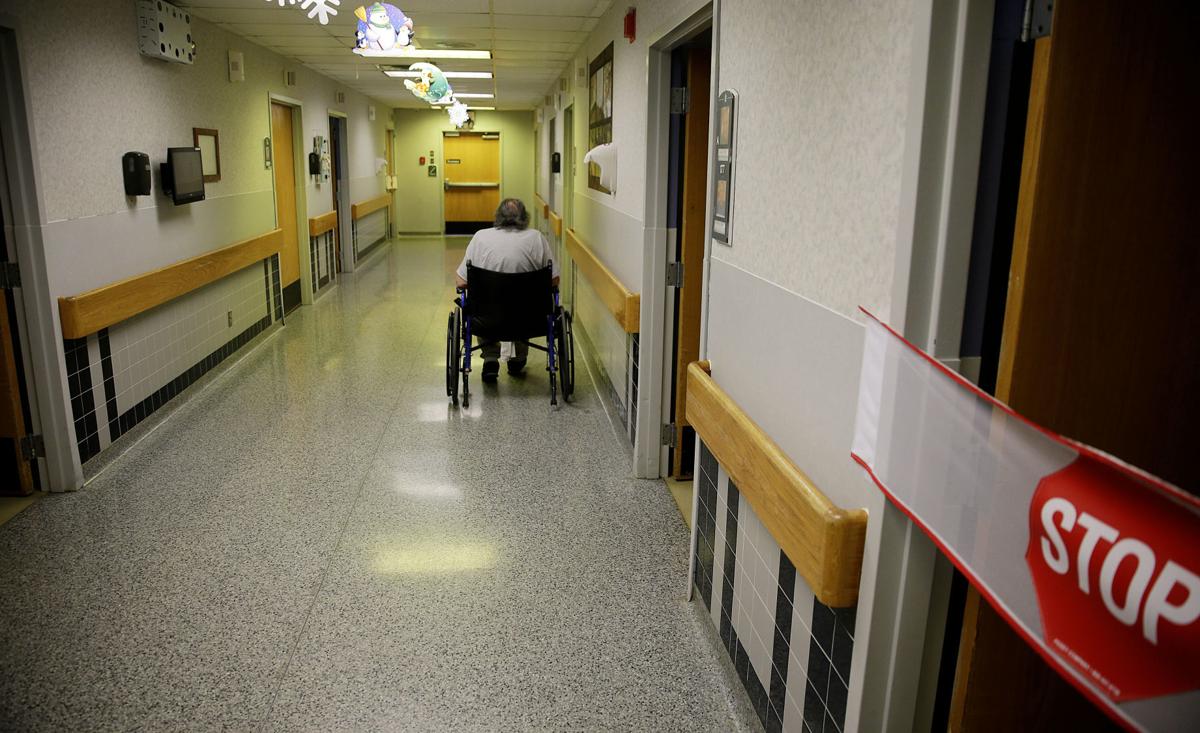 A resident rolls down a hallway at an Oklahoma Department of Veterans Affairs center. MIKE SIMONS/Tulsa World file 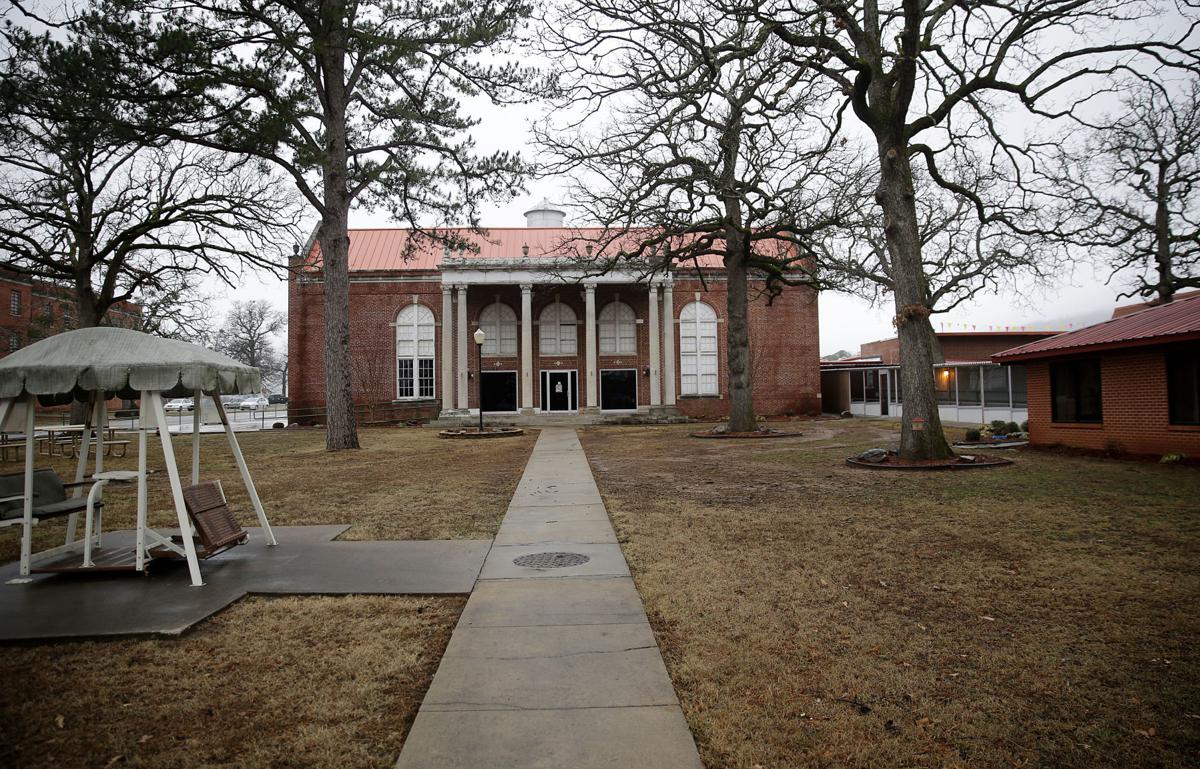 The Oklahoma Veterans Center is a 175-bed facility in Talihina. MIKE SIMONS/Tulsa World 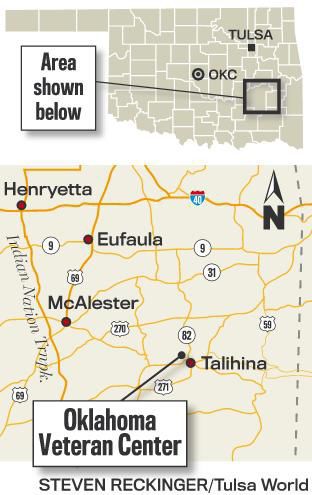 Investigators from three agencies, but apparently no law enforcement, are investigating the Tuesday death of a resident at the Oklahoma Veterans Center at Talihina.

Another resident at the same state facility was found with maggots in a wound and later died there just four months ago, and a state lawmaker recently filed emergency legislation to try to shutter the facility.

Officials at the Oklahoma Medical Examiner’s Office have just completed an examination of the body of Leonard Smith, 70, but officials said their report about the cause and manner of his death are pending the results of toxicology tests.

A nurse who works in the facility but asked not to be identified told the Tulsa World that Smith’s death “was not of natural causes, and I think the ME’s office will confirm that.”

A spokesman for the Oklahoma Department of Veterans Affairs said officials there determined it was a “sentinel event” — an unanticipated event in a health care setting resulting in death or serious injury to a patient, unrelated to the natural course of the patient’s illness — so they were required to report the death for further investigating by the U.S. Department of Veterans Affairs and the Oklahoma Department of Human Services Adult Protective Services program.

“There’s nothing more I can say,” said Shane Faulkner, public information officer at the state Department of Veterans Affairs, or ODVA. “We don’t want to give any information out that could be contradicted by the investigation. We want to let the investigation play out and go from there.”

Faulkner said he was unsure where Smith hails from, as veterans centers accept patients from all over the U.S. He said records show Smith’s last known address was in Talihina, but his family contact “lives no where near there.”

When the Tulsa World asked Faulkner to confirm a tip that two nurses had been suspended in Smith’s death, he responded by saying that report was untrue.

“No one has been terminated. Did someone no-call or no-show? That’s common in a health care setting,” he said, “but there have been no suspensions, no disciplinary action taken.”

After the Tulsa World was able to contact a nurse who confirmed they were one of two nurses placed on paid administrative leave in the aftermath of Smith’s death, Faulkner said he needed to go back and check with the clinical coordinator.

A few minutes later, he called back with a different response.

“ ‘Suspended’ is not the word for it. That’s the word I had asked,” he said. “Two nurses are on administrative leave with pay during the investigation. This is something that we do in any type of event like this. Suspended is not the right word, and this is a learning experience for me. I guess I need to ask a little bit more questions whenever I’m asking something like this.

“I’m not happy about it right now,” Faulkner added.

ODVA operates seven veterans centers that provide intermediate to skilled nursing care for veterans. The centers, which are funded by a combination of federal and state dollars, are in Ardmore, Claremore, Clinton, Lawton, Norman, Sulphur, and Talihina.

One of the nurses on administrative leave who was contacted by the Tulsa World said law enforcement needs to investigate Smith’s death.

But Melissa Rigsby with the Latimer County Sheriff’s Office said she knew of no calls or reports about Smith’s death from either the veterans center or medical examiner. Jeff Smith, district attorney for Latimer and LeFlore counties, did not return a call for comment.

“The death was not of natural causes, and I think the ME’s office will confirm that,” the nurse told the World. “This one I believe falls solely on administration not listening to staff. There were no investigators, no law enforcement, no pictures taken on this death ... If there was a crime committed, and I’m not saying there was, the crime scene’s been cleaned. All evidence has been removed, and there’s no record of anything at all other than the nurses’ notes.”

The nurse, who wished not to have a name published, was reluctant to provide many details about Smith’s death. But the nurse did confirm an anonymous tip that Smith died shortly after being given something to eat and drink, and during life-saving attempts to clear his airway he was found to have something lodged in his throat that had prevented the food and fluids from passing through.

“He had an object down his throat. I can’t tell you if it was a garbage bag or a bag from his IV. There was a foreign body,” the nurse said. “It’s my understanding that the foreign object went with his body to the ME’s office.”

The Oklahoma Veterans Center at Talihina is about 150 miles southeast of Tulsa and has 175 beds, including 50 beds in a special-needs unit, primarily for patients with dementia.

ODVA officials said previously that four staff members — one physician assistant and three registered nurses — had resigned after Vietnam veteran Owen Reese Peterson was found with maggots in a wound and later died on Oct. 3. But the Tulsa World reported in December that the physician assistant was rehired a month after his resignation and is now working at the veterans center in Lawton.

On Jan. 19, state Sen. Frank Simpson, R-Springer, introduced Senate Bill 544 to authorize ODVA to relocate the veterans center at Talihina “subject only to such geographical constraints as may be imposed by the U.S. Department of Veterans Affairs.” The bill has an emergency clause, meaning it would take effect immediately upon its passage by the Legislature and approval by Gov. Mary Fallin

Tuesday's high will be 82, but temperatures will return to the mid-90s by Thursday, the weather service said.

A resident rolls down a hallway at an Oklahoma Department of Veterans Affairs center. MIKE SIMONS/Tulsa World file

The Oklahoma Veterans Center is a 175-bed facility in Talihina. MIKE SIMONS/Tulsa World