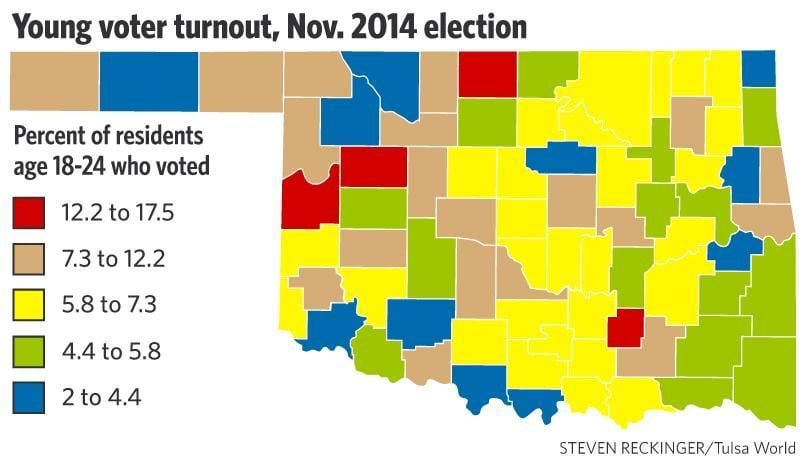 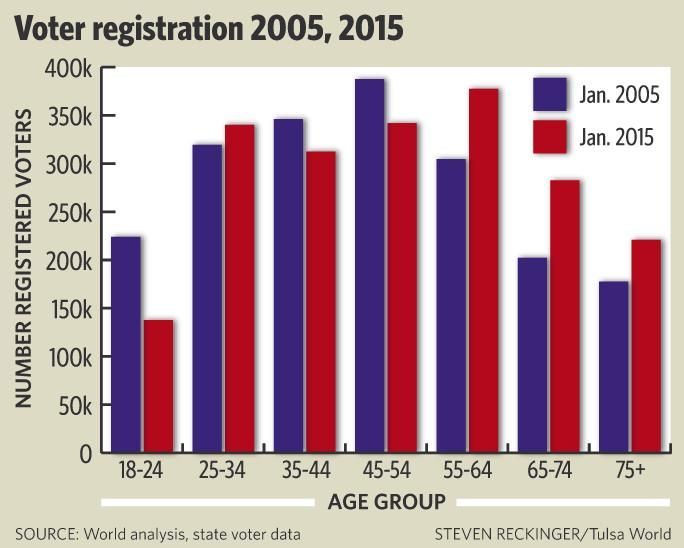 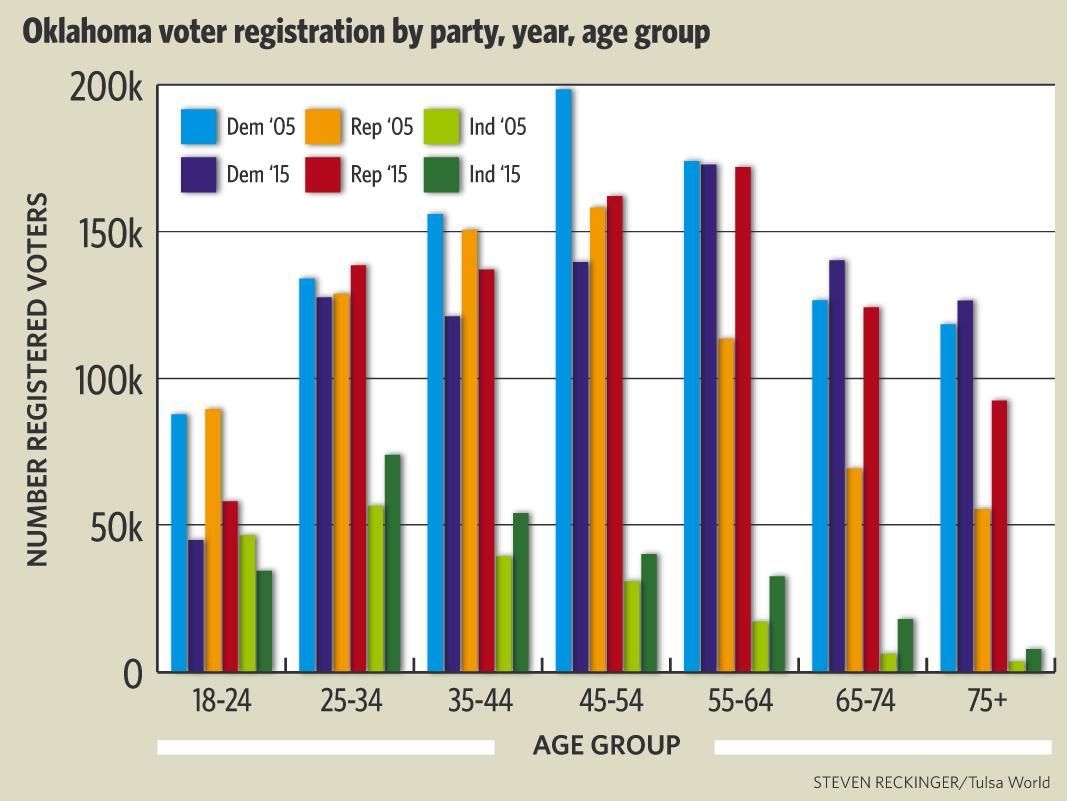 Their reasons may vary, but one thing is certain: Young adults are increasingly uninterested in voting.

The number of registered voters in Oklahoma ages 18 to 24 has declined nearly 40 percent in the past decade, according to a Tulsa World analysis of voter registration records.

So where did all the voters go?

Vanessa Sweet used to vote prior to moving from Minnesota to Oklahoma. The 22-year-old college student said many young voters are turned off by the candidates.

“I don’t think there have been a lot of candidates that have connected real well with the millennial age group,” Sweet said. “I think a lot of it is just political disillusionment. It feels like the races have all been determined before they start.”

Timing may be to blame in some of the decline in young adult voter registration.

“It tends to crest directly after a presidential election and then it goes down and starts going slightly back up again before a gubernatorial election,” Dean said.

The overall state voter registration has increased 3 percent from 2005 to 2015.

The two major parties in Oklahoma may have their differences, but Democrats and Republicans share the desire to attract young voters.

The declines in voter registration rates among 18- to 24-year-olds come while their total population grew 15 percent in the state since 2005, according to Census Bureau data.

Put another way, nearly two in three Oklahomans ages 18 to 24 were registered to vote in 2005 compared to 35 percent in 2014, the most recent year for population figures.

Tulsa resident Allison Bell said she plans to register to vote but hasn’t gotten around to it. The 19-year-old college student said she tries to stay up on national politics but admits not being as in tune with local issues.

“I’ve never actually talked to any of my friends about politics,” Bell said, “It just never seems to come up apart from people touting their gun rights and whatnot.”

She said it’s hard knowing where some politicians stand on the issues.

“Nobody is really straightforward,” Bell said. “At this age we have a hard enough time keeping up with our school work and so adding another layer to that is a bit much.”

She said she will probably register as an independent, although she said the Republican Party platform is more likely to reflect her opinions.

Bell said more people her age would register if it was easier, such as an online process.

A new law should address some of those wishes.

“Online registration is going to be useful to people of all ages and demographics, but there’s no question it’s most useful to young people who expect to be able to accomplish these kinds of tasks online,” Holt said. “So I’m hopeful it will increase registration among young people when all you have to do is tweet out the link.”

Holt said he hopes the new online system will be operational by the 2016 presidential election.

Increasing voter registration is the first step in attracting younger voters to politics, Holt said. Increasing the turnout will be the next step.

“We have created a system that is extremely difficult to participate in unless you have an almost superhuman level of interest in politics, at least outside of the big elections,” Holt said. “I think there are things we can do to simplify the process and essentially market elections better than we do today so that people who lead very busy lives will participate again.”

The 2014 elections showed the stark aversion to voting among young adults.

The November election, which featured a state gubernatorial race and congressional races, drew 40.7 percent of registered voters to the polls, the lowest turnout in Oklahoma since 1978.

The turnout among 18- to 24-year-olds was almost nonexistent, with 14.5 percent of registered voters in that age group casting ballots, the World analysis indicates.

The trend is not unique to Oklahoma.

The League of Women Voters of Metropolitan Tulsa knows of the decline among young voters and is trying to address it.

At 30, Elizabeth Harris is the first millennial to become president of the league’s board of directors. She said her generation got its first taste of politics in 2000 with the Bush-Gore election.

“If that’s the first brush you have of a presidential election and really understand the importance of it, then that is going to shape your view of how important voting is from there on out,” Harris said.

“We’re taking a community approach towards it,” Harris said. “The league can’t do it on their own, so it’s about creating a coalition and making sure that we all have the same goal around voter registration and engagement.”

She recognizes the challenge lying ahead.

“People are really disillusioned with the political environment right now,” Harris said. “It’s becoming very partisan and very contentious even within the parties.”

Democrats weigh allowing independents to vote in party's primaries. A15