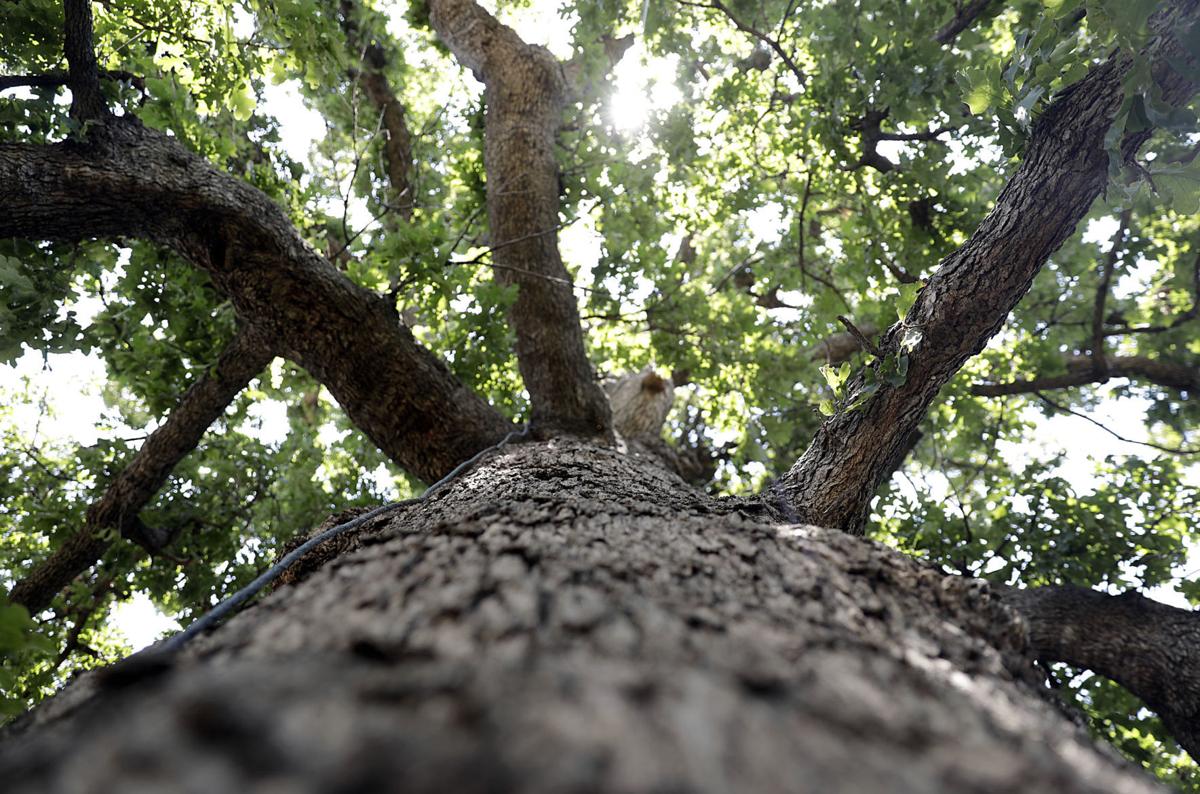 After the Indian Removal Act was signed by President Andrew Jackson in 1830, the Muskogee (Creek) Nation was forced to move from Georgia and Alabama to Indian Territory, which is now eastern Oklahoma. More than 20,000 Muskogee (Creek) people traveled on their own Trail of Tears from the summer of 1836 to the spring of 1837, with about 3,500 dying along the way. In a ceremony proclaiming their arrival and establishing their new home in what is now Tulsa in 1836, they placed the ashes from their original fires at the base of a towering oak and had their first council fire there. The Council Oak Tree, seen here, still stands at 1750 S. Cheyenne Ave. MIKE SIMONS/Tulsa World 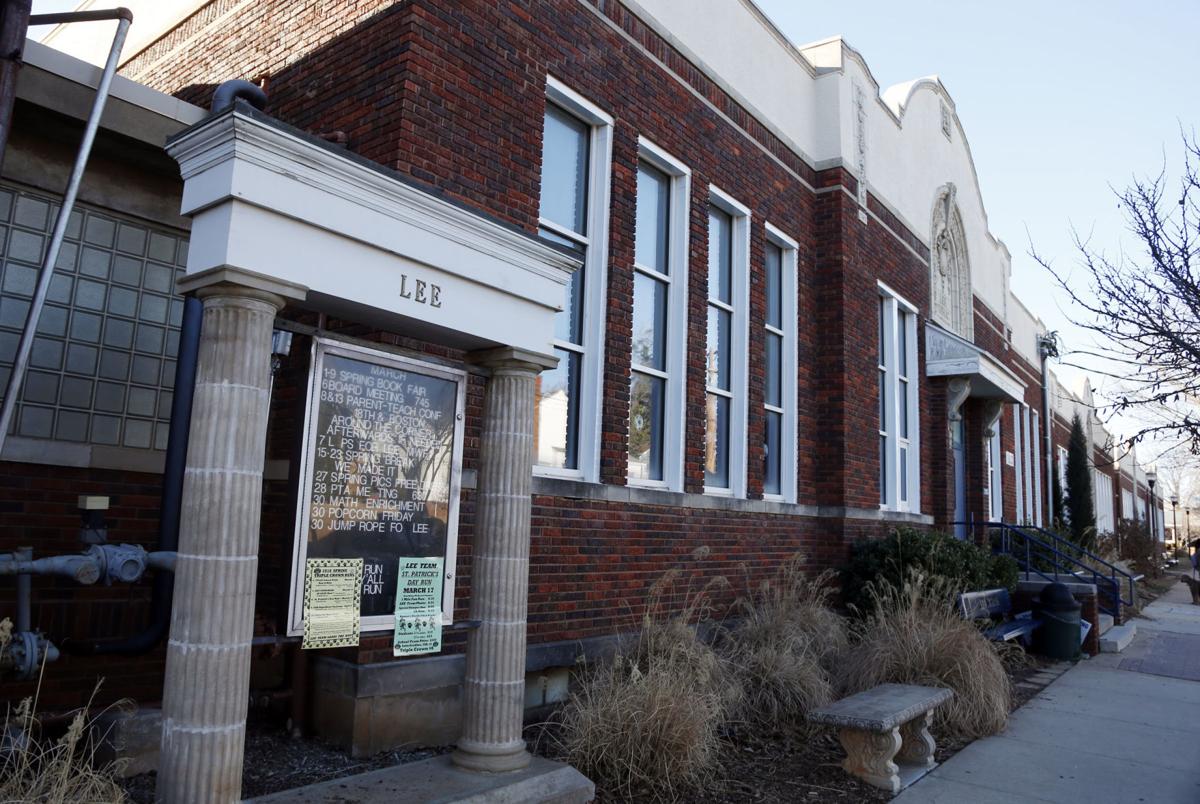 After the Indian Removal Act was signed by President Andrew Jackson in 1830, the Muskogee (Creek) Nation was forced to move from Georgia and Alabama to Indian Territory, which is now eastern Oklahoma. More than 20,000 Muskogee (Creek) people traveled on their own Trail of Tears from the summer of 1836 to the spring of 1837, with about 3,500 dying along the way. In a ceremony proclaiming their arrival and establishing their new home in what is now Tulsa in 1836, they placed the ashes from their original fires at the base of a towering oak and had their first council fire there. The Council Oak Tree, seen here, still stands at 1750 S. Cheyenne Ave. MIKE SIMONS/Tulsa World

How we got from Robert E. Lee Elementary School to Council Oak Elementary

Three-hundred seventy-two days after Tulsa Public Schools began evaluating its school names in the wake of the white supremacist protests in Charlottesville, Virginia, the district no longer has a school named for Confederate Gen. Robert E. Lee.

Six members of the seven-member board voted for the name change. One, Gary Percefull, the board member who represents the school, said “present” when it was his time to vote.

The name change comes just two days before the start of the new school year and just before the school’s centennial celebration. The school board had renamed the former Robert E. Lee Elementary School simply "Lee School" in May.

The “Council Oak” name honors the still-standing tree at the nearby meeting place where the Creek Nation council first met in 1836 after being forcibly resettled in Oklahoma.

The renaming process was fraught with conflict, filled with stops and starts and cries of discrimination, and helped the school district acknowledge institutional racism. Its conclusion makes Tulsa another city that has removed a statue and renamed a school that honored a Confederate figure.

“In the end, Tulsa’s own history precludes the solution of including Lee,” said Suzanne Schreiber, school board president. “Being home to one of the largest race riots and massacres, a city that was officially segregated and is now segregated by almost every outcome or measure of success, leaving this vestige (in place) wastes our chance to extend our hand and do better and overtly recognize our history.”

She continued, “This notion of making something right for generations of Tulsans of color was better said by Mayor Mitch Landrieu when he talked about removing Confederate statues from New Orleans. He said, ‘This is about showing the whole world that we as a city and as a people are able to acknowledge, understand, reconcile and most importantly choose a better future for ourselves, making straight what has been crooked and making right what was wrong.’ ”

The struggle to rename a school that honors a racist past isn’t unique to Tulsa, as Schreiber acknowledged. School districts and higher education institutions across the country have also grappled with how to confront their pasts and with considering whom they honor.

For example, the Fairfax County school board in Virginia changed the name of J.E.B. Stuart High School — also named for a Confederate Army general — to Justice High School. Previous efforts to change the name to some variation of Stuart or for U.S. Supreme Court Justice Thurgood Marshall, the first black member of the high court, failed.

In Connecticut, Yale University struggled for years with whether it should rename Calhoun College, named for former U.S. Vice President John Calhoun, a defender of slavery and proponent of states’ rights. After years of protest, Yale eventually settled in 2017 on renaming the undergraduate residential college in honor of Grace Murray Hopper, a trailblazing computer scientist who served as a rear admiral in the Navy.

Scott Pitcock, an opponent of the name Lee, said the name Council Oak represents Tulsa and its history.

Not every speaker spoke in support of the Council Oak name. Many supporters of keeping the school named Lee honed in on the fact that some members of the Creek Nation owned slaves. They said naming a school after the Creeks’ early-day meeting place was contradictory to the rationale that caused the district to take the Robert E. Lee name off the school in the first place.

“To state the obvious, the Creek Council Oak tree has no meaning absent the Creek Nation,” said Mark Sanders, who had advocated for the name Lee Reconciliation School. “So the Council Oak is necessarily honoring that nation, but is the Creek Nation worthy of that particular honor in the context of this year-long school-naming debate, which has always been about the legacy of slavery and the Confederacy.

“The Creek Nation was a slaveholding tribe. Upon their arrival here, the Creeks re-established their national governments and re-enacted slave codes,” Sanders told the school board. “Ironically, you leave no rhetorical daylight between you and proponents of retaining the name Lee.”

There are some differences between many Native slaveholders and white slaveholders, according to the Oklahoma Historical Society and other historians. Unlike those owned by whites, Creek slaves were often allowed to read and write and were rarely separated from their families. One historian, Robbie Ethridge, in his book “Creek Country: The Creek Indians and Their World,” wrote that Creek slaves were treated more like tenant farmers than slaves. However, the Oklahoma Historical Society noted that slaves of both Creeks and whites were exploited for their masters’ profit.

The descendants of Creek Freedmen — former slaves of the Creeks — have recently filed a class-action lawsuit seeking to have the Muscogee (Creek) Nation’s constitution declared void and in violation of the Treaty of 1866, which guaranteed tribal citizenship to the tribe’s freed slaves and their descendants, as well as those of black Creeks.

Those seeking to retain the name Lee have said it has never been about the name Robert E. Lee and is more about the name Lee School. They have said that if the school’s name was changed, the shared academic heritage of multiple generations would be lost. Some disputed that, including a member of the second Lee renaming committee, Jason Parker.

“The things that have been said tonight, I respect all of them. As someone who may be considered, I guess, a millennial, the stings of racism and hatred and bigotry don’t affect me nearly as much as they did my parents, and my parents’ parents, who were raised in Jackson, Mississippi,” said Parker. “Nevertheless, those things are very much real. Those are things that, as an African-American, as a minority today, I have been taught to pay no attention to.

The name change took effect immediately after the meeting.

When asked by the World what he meant by voting “present,” Percefull said, “I’m here. What does present generally mean?” The World asked: “Why didn’t you vote yes or no” on the school name question?