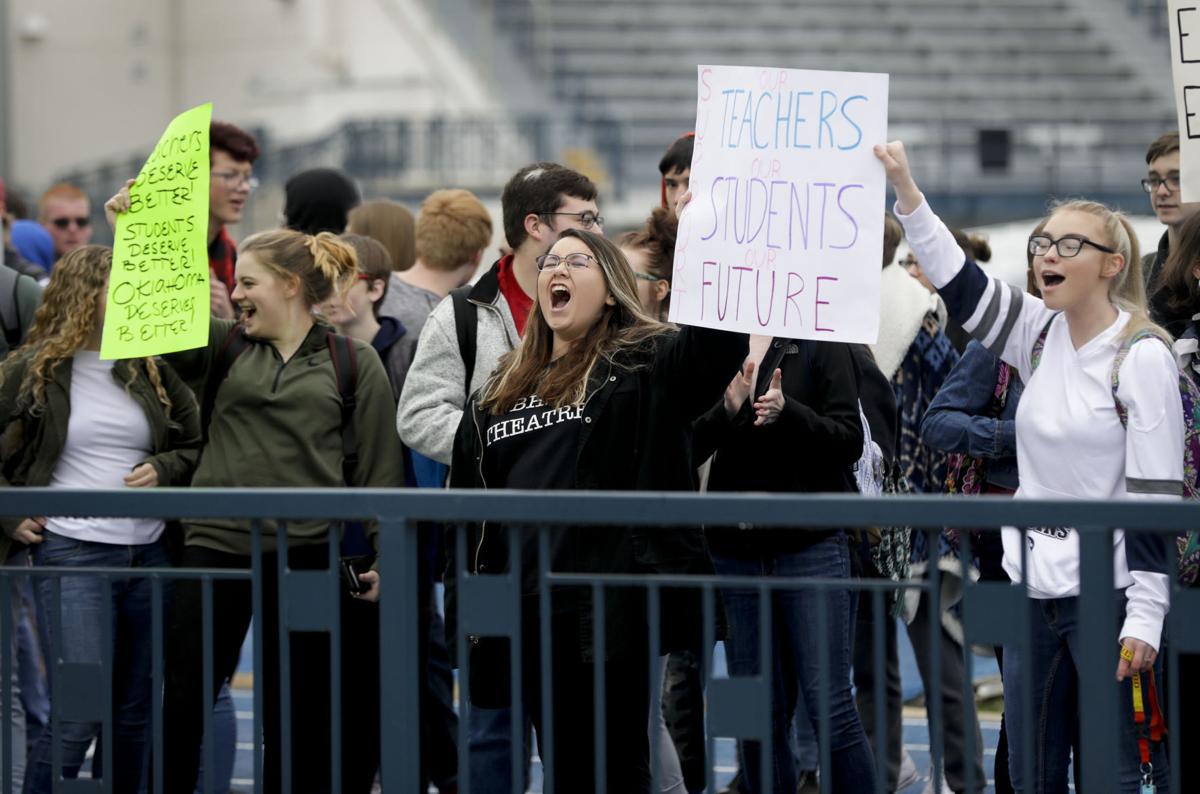 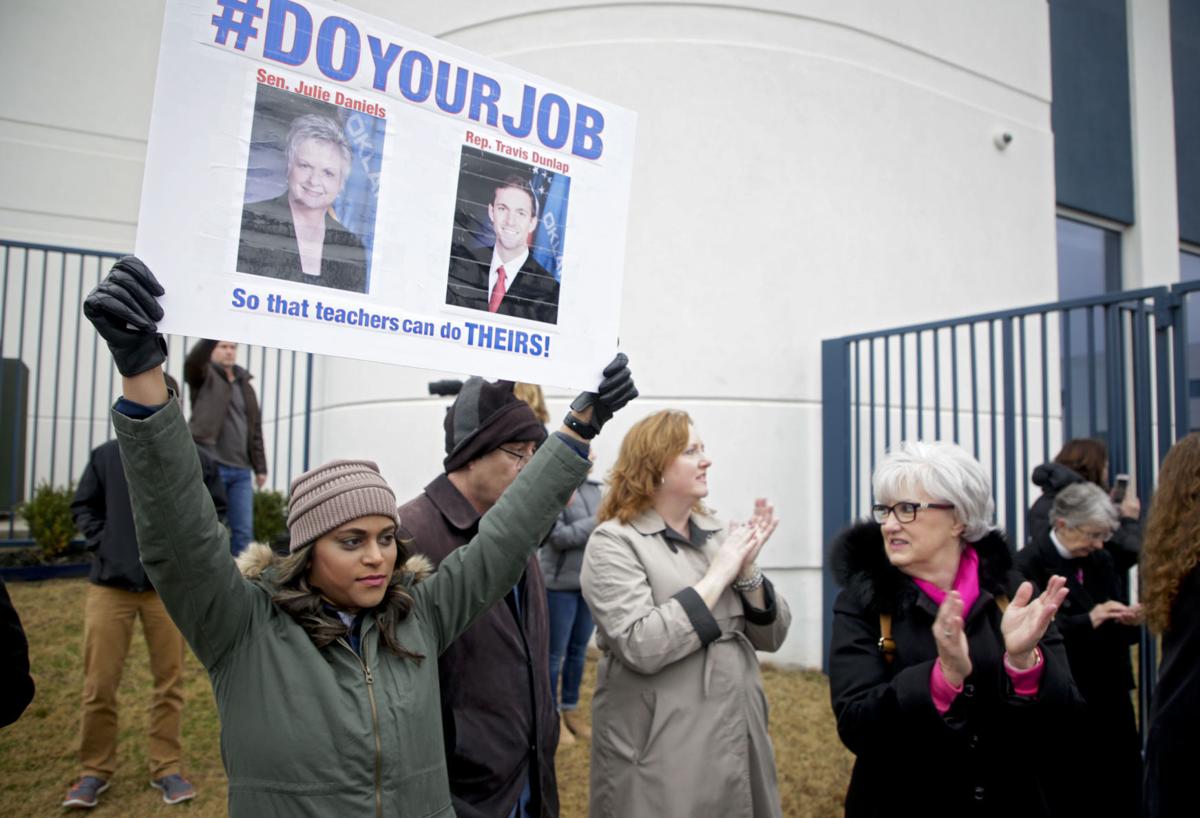 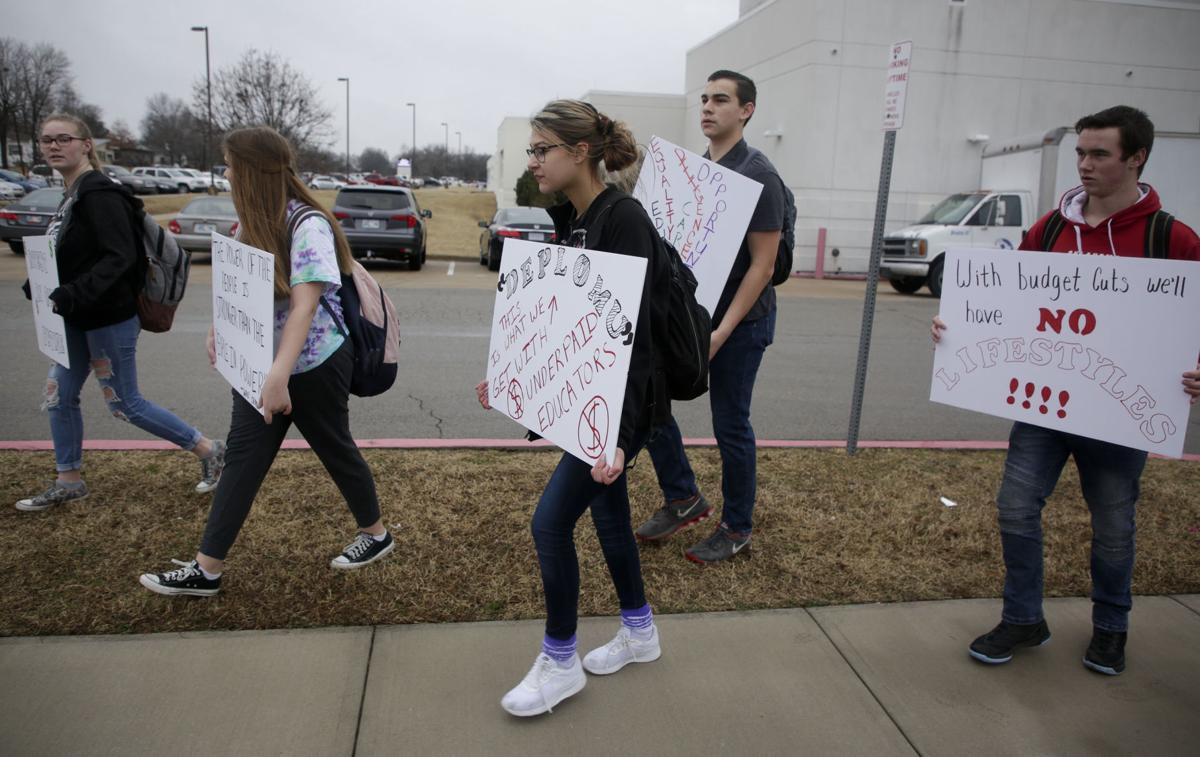 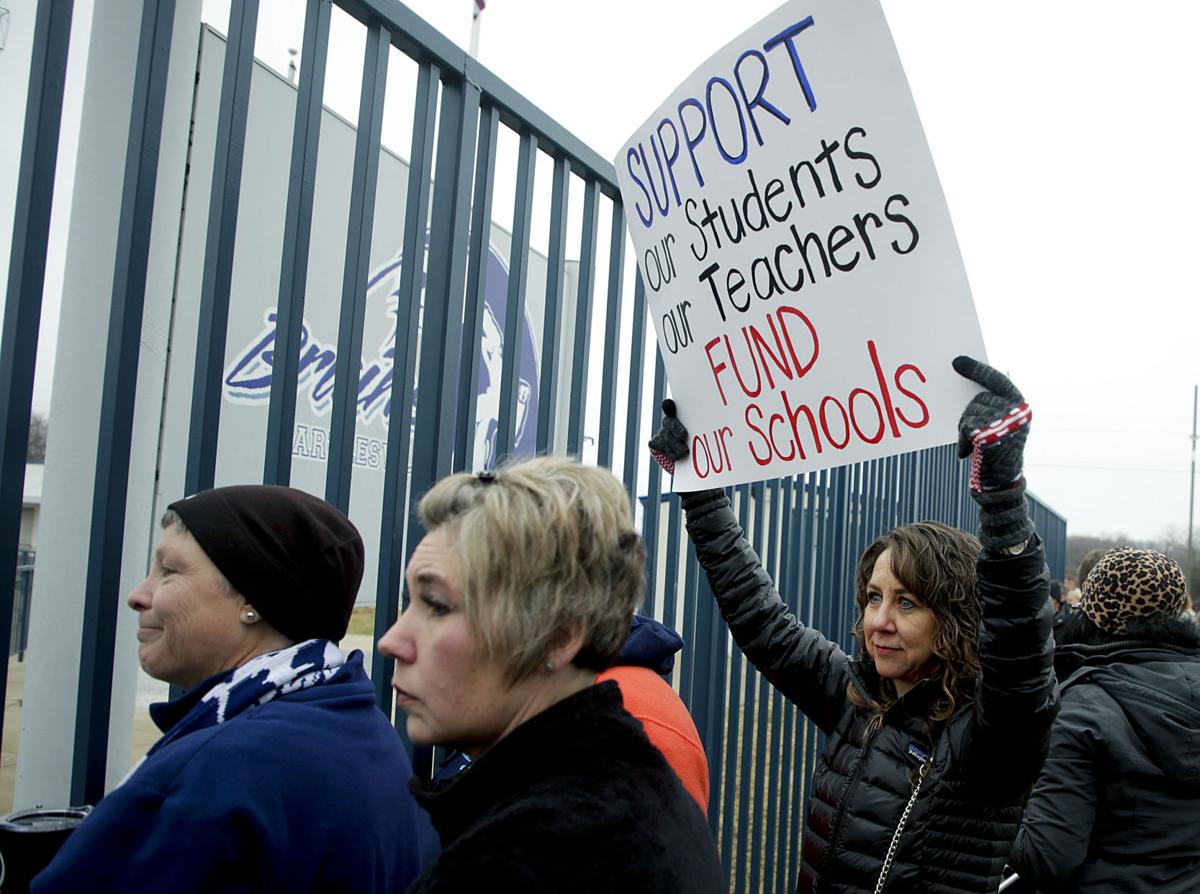 Stevie Williams, whose son and daughter go the Bartlesville High School, holds a sign outside the school Friday in support of students who were participating in a walkout to protest state budget cuts to education. MIKE SIMONS/Tulsa World 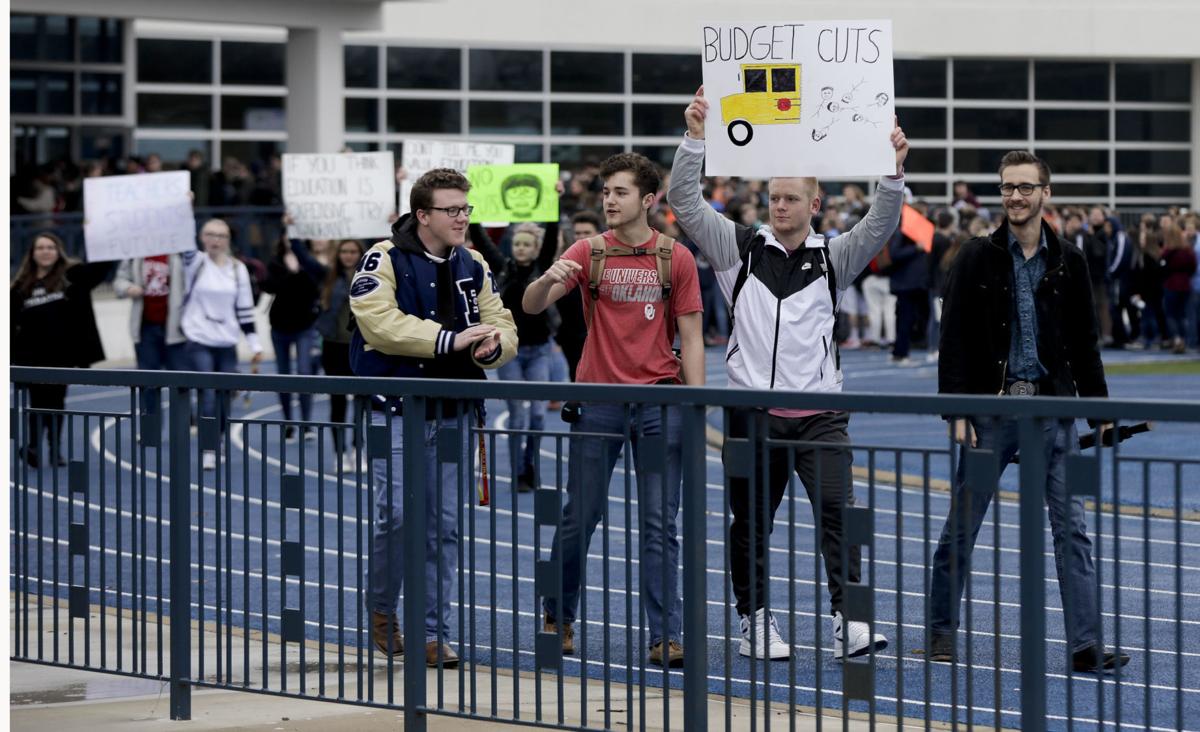 BARTLESVILLE — Frustrations over continued state budget cuts to education culminated in Bartlesville as hundreds of students walked out of class Friday morning.

District officials estimate about 330 of the 1,600 students enrolled at Bartlesville High School assembled on the football field to protest another round of midyear budget reductions affecting Oklahoma teachers. The walkout lasted 22 minutes as a representation of the $22 million in cuts to common education, higher education and CareerTech passed this week by the Legislature.

Several teenagers held signs bearing messages such as, “If you think education is expensive try ignorance” and “Don’t tell me you value education. Show me your budget. I’ll tell you what you value.”

Some students used a bullhorn to address their classmates and lead chants of “22.”

Classes continued normally during the walkout, and participants were counted absent from any classes they missed, according to a statement by Bartlesville Public Schools.

“While the district understands that some students wish to express their concerns regarding school funding cuts via a walkout, the district and its high school administration are NOT sanctioning nor endorsing a walk-out,” the statement reads.

Although district officials did not approve the walkout, they did dictate where the students could stand, supervised their demonstration and forbade them from talking with reporters due to unspecified safety concerns.

Five students, including 15-year-old freshman Elizabeth Sparks, opted to skip the entire school day to protest off property and outside of the administration’s supervision.

Sparks said her small group decided to split from the main rally in order to walk to the Education Service Center, which is about a mile away from the high school, and reach a larger audience. She carried a sign reading, “The power of the people is stronger than the people in power” — a quote from internet activist Wael Ghonim.

“Our teachers have to work three to four jobs just to support their families,” Sparks said. “I feel with this budget cut, some of them are going to quit, and we still need an education. So we’re not doing this just for the teachers who have always cared about us. We’re doing this for us, too.”

Her friend, 15-year-old Savanna Cox, echoed those remarks and referenced her own sign stating, “Invest in our future.”

Dozens of community members and parents also gathered on campus to encourage students and express their concerns for the impacts that additional budget cuts will have on education in Oklahoma.

Although they were not allowed to join those rallying on the football field, district officials permitted supporters to stand outside the surrounding gates.

Dean Dobyns, 73, said it’s past time to give the state’s teachers raises, rather than continuing to take away funding.

“I’m extremely concerned,” Dobyns said. “The kids are our future, and if we don’t invest in our kids, we’re not going to have a future.”

Dobyns said he chose to remain living in Bartlesville after retirement because he believes the city has one of the best school systems in Oklahoma, and he wanted his grandchildren to receive a top-notch education.

“We want to keep our teachers here, but they’re just scraping to make a living,” he said. “It’s that way all over Oklahoma. We’re losing teachers to Kansas and Arkansas. We’ve got to do something to stop that.”

Mark Blumer, 26, said he’s been inspired by the advocacy displayed by the current generation of students.

As a 2010 graduate of Bartlesville High School, Blumer said he doesn’t remember seeing this level of initiative when he was a teenager.

“Seeing all these very intelligent students come together and fight for their education and their future, it’s an incredible thing,” he said.

Blumer also expressed frustration with two Republican lawmakers from Bartlesville, Sen. Julie Daniels and Rep. Travis Dunlap, for what he says is a lack of effort to help the city’s teachers.

To help illustrate his resentment, Blumer brought a sign featuring the legislators’ pictures and the words, “#DoYourJob so that teachers can do THEIRS!”

“They have just ignored the issue,” Blumer said. “They’ve just continued to push it back. I think there needs to be some action.”

Daniels received heavy criticism earlier this week after flatly denying a student organizer’s invitation to attend the walkout on Facebook and encouraging her to stay in class.

The senator responded to the teenager with a comment cautioning her to “think carefully about your actions so as to not alienate your supporters and further alienate those who contact me opposing tax increases or with critical views on education.”

The comment drew the ire of many on social media, and Daniels told the Tulsa World on Thursday that when she posted the comment, she believed the demonstration would last all day instead of 22 minutes.

Stevie Williams, whose son and daughter go the Bartlesville High School, holds a sign outside the school Friday in support of students who were participating in a walkout to protest state budget cuts to education. MIKE SIMONS/Tulsa World