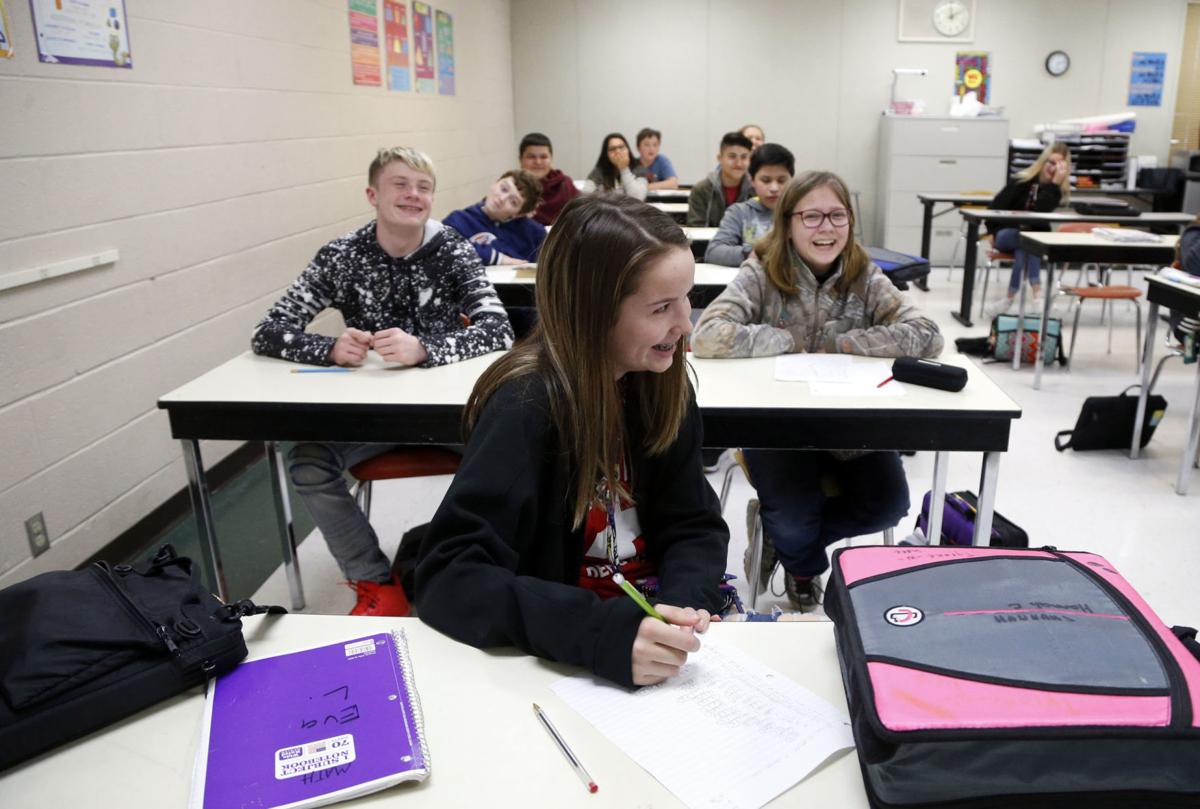 Wells Middle School student Eva Lawhorn talks with her teacher, Kristin Applegate, in math class in Catoosa, where the district has been on four-day school weeks for two years. STEPHEN PINGRY/Tulsa World 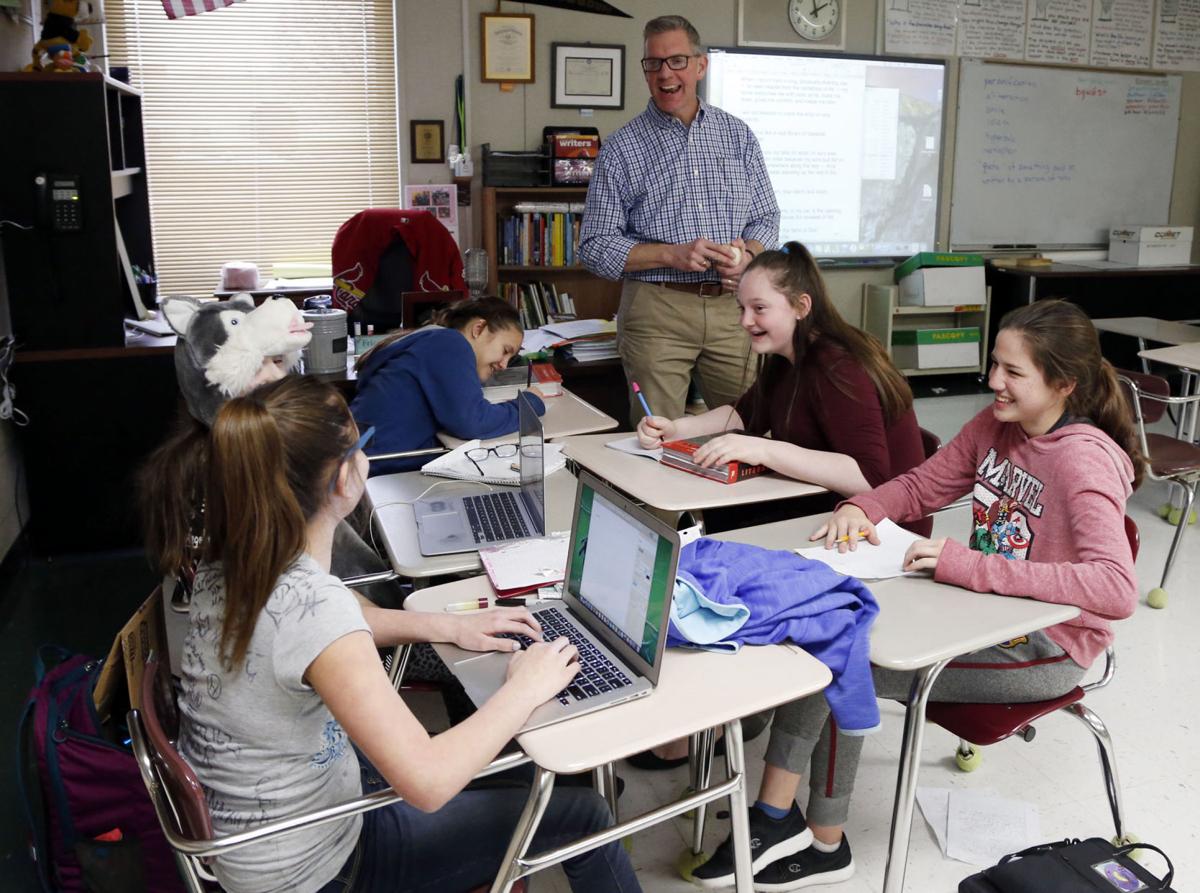 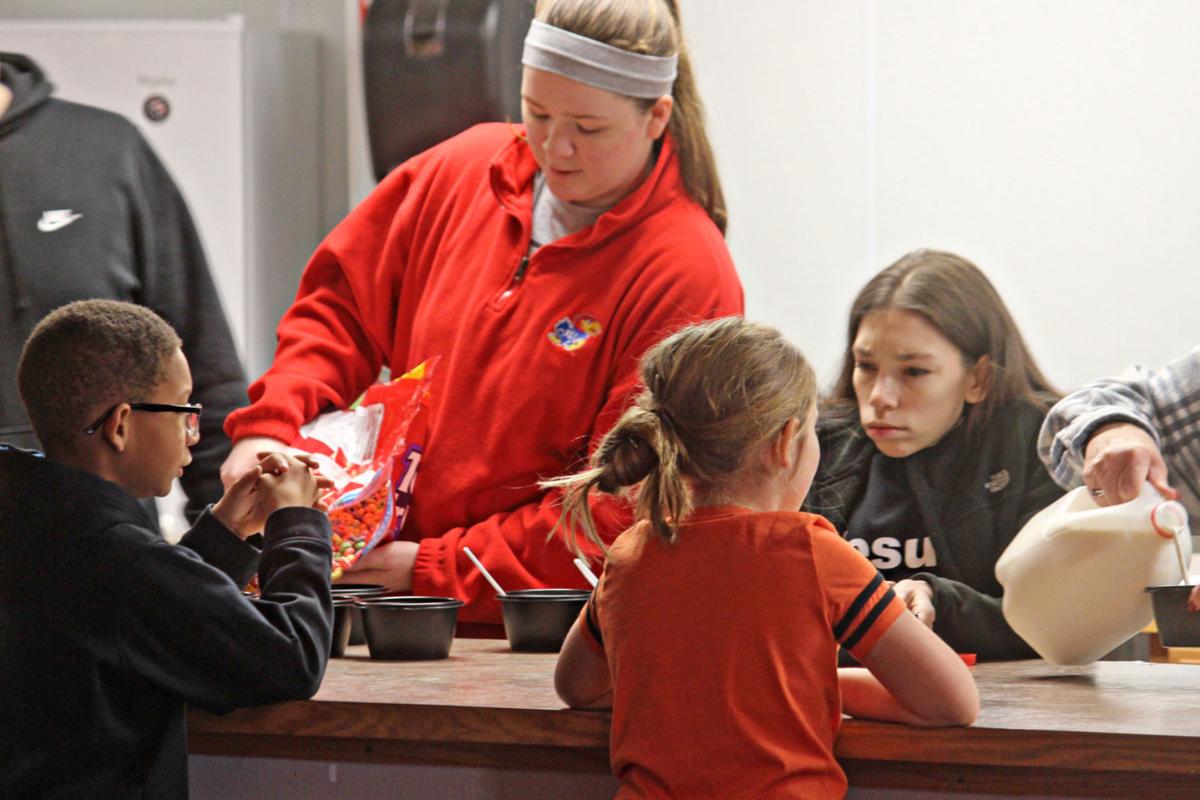 Volunteers Autumn Wolff and Cheyenne Hallige assist students with breakfast at the First Baptist Church’s Day Program. The church-sponsored program is responding to the need of area families with children 3 years old to sixth grade that are affected by the four-day school week at Keys Public Schools. MIKE BROWN/for the Tulsa World 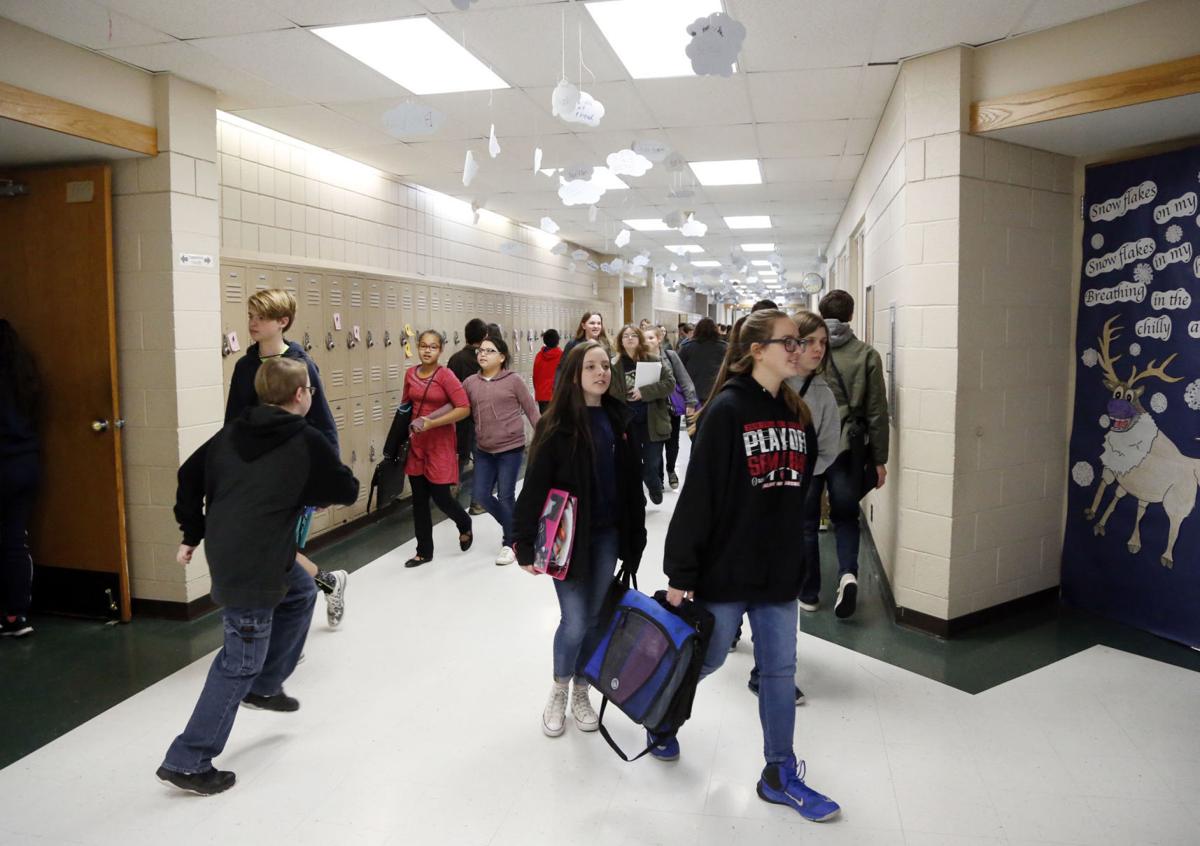 Wells Middle School students walk the hallways to class in Catoosa, which has been on a four-day schedule since 2016. STEPHEN PINGRY/Tulsa World 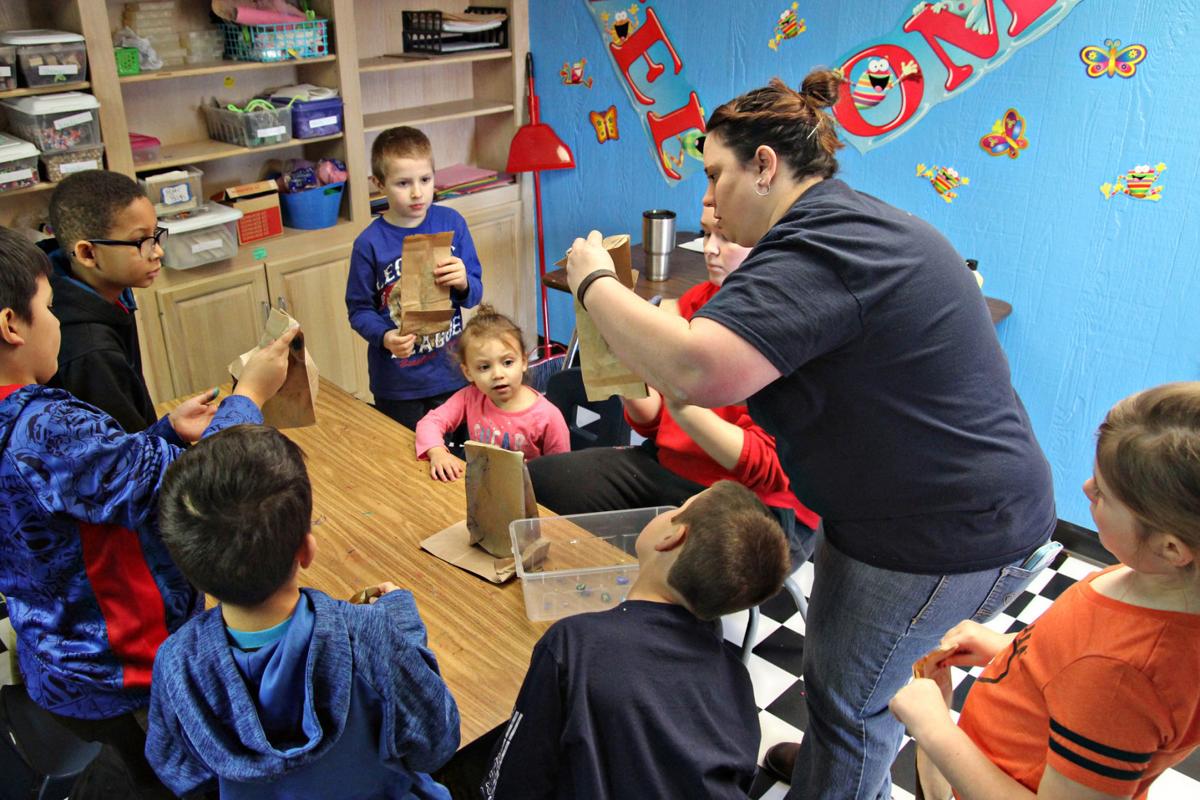 During craft time at Keys First Baptist Church’s day program, coordinator Carla Hayes opens one of the projects to reveal the artwork. The paper bags were filled with stones, various colors of paint and shaken vigorously by the children to create abstract “works of art.” MIKE BROWN/for the Tulsa World 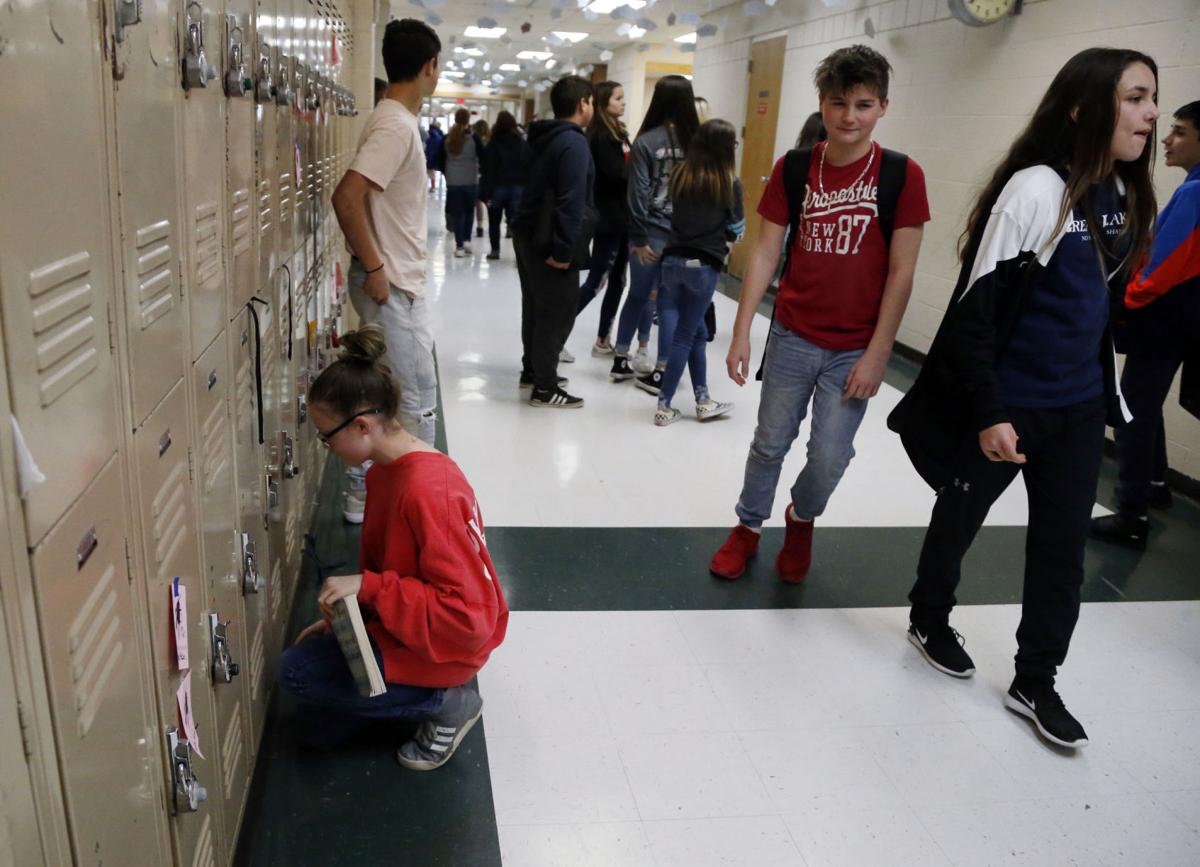 Once a district goes to a four-day school week in Oklahoma, it’s tough to go back.

About one-fifth of all 513 Oklahoma public school districts — 91 — have a four-day school week, something that has become synonymous with education in Oklahoma. Many districts have been forced by state funding cuts to find a way to trim expenses without trimming jobs, said about a dozen superintendents who responded to a Tulsa World survey.

Many of those same superintendents said the four-day week has become a recruitment tool to retain and attract talented teachers. They say they’ve saved on utility bills and transportation costs, and the longer class times that come with a four-day week have allowed teachers to get deeper into their curriculum. Others say the impact on academic performance is unclear, crediting the change in state testing for obscuring the true impact on students.

But most agree that it would be awfully unpopular to go back.

“After finding the high level of preference for the 4-day week, I believe returning to a standard 5-day week would make it more difficult to retain and recruit teachers and support staff,” Bob Gragg, the interim superintendent at White Rock School, said in an email.

Not everyone is in love with the four-day week, however. Oklahoma Gov. Mary Fallin has advocated for five-day weeks and said the prevalence of four-day school has made it difficult to recruit businesses to Oklahoma. The Oklahoma State Department of Education said in early 2017 that it is unclear how much money districts actually save on a four-day week, and Superintendent Joy Hofmeister has said four-day districts are spreading like a “contagion.”

And not all superintendents love the switch either.

“As soon as the money gets better, we’re going back,” said Keys Public Schools Superintendent Vol Woods in an interview. “We’re not doing this forever.”

Catoosa teacher Kirk McAnany compares teaching to show business. He knows a thing or two about that. He’s been the PA announcer of the Tulsa Drillers for more than 20 years.

Four work days a week makes it easier for him and his students to perform, he believes.

“We make better use of the time we have. We’re able to get a lot more done in 65 minutes than we’re able to in 50 minutes. In a 50-minute class, ... it’s not like they sit right down and get to work because they’re middle-schoolers, and that’s time that’s wasted over a five-day period,” said McAnany.

“The fourth day in a four-day week isn’t like the fifth day in a five-day week. The fifth-day of a five-day I’m just worn down. And I don’t feel like that on Thursdays,” said McAnany.

Having Fridays off allows McAnany to work another job in addition to his time with the Drillers. It is common for Oklahoma teachers to have second and even third jobs.

“I’d prefer the four-day week much more. I think I’m a better teacher and they’re doing better in school because of it,” said McAnany.

It is not clear whether a four-day school week versus a five-day week helps or harms students academically; studies have come down on both sides of the fence.

Multiple districts surveyed said the effect is unclear. Others said it had improved academic performance. One district said it wasn’t tracking the difference at all.

“I think (students) are more productive because of the way the day is set up. They’re getting noticeably better over the course of a four-day period, not necessarily so over a five-day period,” said McAnany. “I think it’s because they’re doing something continuously for a 65-minute period.”

Two of McAnany’s students, Charles Colvin and Gabriel Fogger, think they’re a little more tired at the end of the day. Colvin said he doesn’t particularly care about the number of school days in a week.

“I get home later. Maybe that’s kind of stupid,” he said.

Fogger said he really likes the four-day week and thinks he absorbs more in class.

“That extra time really helps us recuperate,” he said.

A study done by researchers at Georgia State University compared the standardized test scores of four-day districts in Colorado to five-day districts with similar demographics.

Mary Beth Walker, one of the authors of the study, told the Tulsa World that what they found surprised them. She said four-day districts compared favorably to the five-day districts in reading and mathematics, but only the difference in math scores was statistically significant.

However, Walker said results were inconclusive and needed further exploration: examination of student-level data. Her theory is that teachers and students are more energized on a four-day schedule, and thus, more productive.

“My favorite hypothesis was that a lot of the teachers liked the new schedule and ... if you’re enthusiastic, you might be more productive at your job. It was a productivity argument tied to job satisfaction,” said Walker.

Hunger is also an issue as most districts with four-day weeks have a majority of students qualify for free or reduced meals. That extra day off can make a difference for children of low-income households.

The Washington Post reported last year that Macomb, a tiny Pottawatomie County district where 88 percent of students qualify for subsidized meals, was on four-day weeks until Superintendent Matthew Riggs persuaded the school board in 2015 to return to a traditional schedule.

Riggs said he could not “in good conscience” continue the four-day weeks when his students were already struggling in math and reading, and not when some were going hungry.

Keys Public Schools is a small district of 803 students in Cherokee County. Woods has been the superintendent for three years, coming back to Oklahoma after heading east to Arkansas for a familiar reason: to earn more money.

Woods, unlike most superintendents who spoke or emailed with the World, is adamant that his district will one day return to a five-day week.

That local church is Keys Baptist, which has sat for at least 60 years on one of those rugged Cherokee County hillsides, just after a bend in Oklahoma 82. After Keys went to a four-day week, families with younger children struggled to find a place for them to go on Mondays. The church, with financial assistance and volunteers from several other local congregations, stepped up.

On Monday morning, 10 kids — the flu kept several out — at the church ranged from third-grade Eli Beights to Keys High School junior Autumn Wolff, the pastor’s daughter, who colored alongside the kids, getting her community service hours.

Wolff said she likes the four-day week. It’s easier for her, and the extra day off every week lets her get her community service hours at the church.

She said some subjects are easier to learn on a four-day week than on a five or vice versa. Her main complaint was that going to basketball practice after a day off of school could be a chore.

The child care on Mondays has placed a burden on the church, said coordinator Carla Hayes. It had to take out additional insurance because it was taking care of children. Hayes estimated it costs the church an extra $250 a week to host the child care; over 33 Mondays, that’s $8,250 a year for a congregation of about 100 people.

Hayes said the child care was “trial and error” at first — the community donated too much food for example — but now the congregation has adjusted to the program and four-day school.

“There’s always change, so we just have to learn to grow with it.”

To go back or not to go back

Most districts surveyed by the World don’t seem likely to go back to a five-day week anytime soon.

Several said it would take a change in state law mandating a five-day week to force them to go back. Some, such as Gragg of White Rock, said they wouldn’t want to risk losing the teachers they’ve attracted or retained because of going to a four-day week.

“I would say that the main concern to moving back to a five-day week would be the original reason the (school board) first discussed going to a four-day week,” said Kenny Mason, superintendent of Chouteau-Mazie Public Schools. “I’d say the teacher shortage is the main issue due to a fear of not being able to recruit teachers to the district or retain the ones we currently have.”

Some superintendents were conflicted on the matter. Keith Edge of Boswell Public Schools said: “Right now it’s worked for us. We may change when we get down the road.”

One district, Elmore City-Pernell Public Schools, went back to a five-day week this year.

“We do feel like we saved some money; ... it was a negligible amount,” said Dave Dellin, vice president of the Elmore City-Pernell school board. “But it wasn’t enough outweigh the feelings of students having an exceptional long day ..., which put a lot of pressure on students.”

Many districts said a change in state funding could persuade them to go back. But they aren’t holding their breath even as the Oklahoma Legislature moves quickly to consider the Step Up Oklahoma proposal, which includes a teacher pay raise.

“There’s been a lot of good talk the last few years, but they were cutting (our funding) in the same sentence,” said Edge.

How much do districts actually save?

Only a few of the districts that the World surveyed actually had a dollar figure for how much they saved going to a four-day week. That number came in between $40,000 and $80,000.

Others estimated that they spent between 10 and 25 percent less on transportation.

A planned teacher walkout that was scheduled to take place on April 23 has been moved up to April 2, but before that, many have been voicing c…

Wells Middle School student Eva Lawhorn talks with her teacher, Kristin Applegate, in math class in Catoosa, where the district has been on four-day school weeks for two years. STEPHEN PINGRY/Tulsa World

Volunteers Autumn Wolff and Cheyenne Hallige assist students with breakfast at the First Baptist Church’s Day Program. The church-sponsored program is responding to the need of area families with children 3 years old to sixth grade that are affected by the four-day school week at Keys Public Schools. MIKE BROWN/for the Tulsa World

Wells Middle School students walk the hallways to class in Catoosa, which has been on a four-day schedule since 2016. STEPHEN PINGRY/Tulsa World

During craft time at Keys First Baptist Church’s day program, coordinator Carla Hayes opens one of the projects to reveal the artwork. The paper bags were filled with stones, various colors of paint and shaken vigorously by the children to create abstract “works of art.” MIKE BROWN/for the Tulsa World