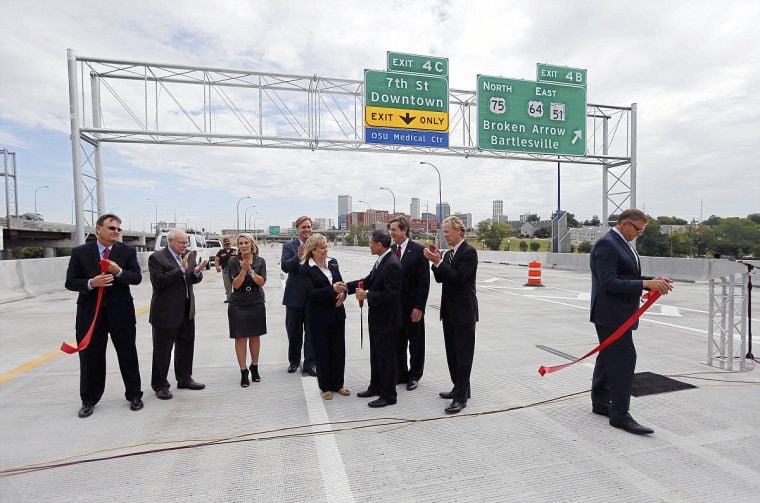 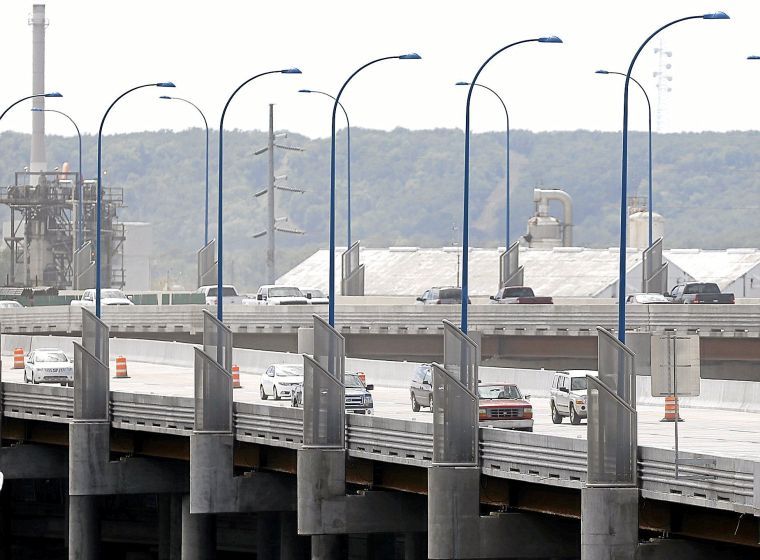 Traffic moves along the I-244 eastbound bridge over the Arkansas River after it was opened Monday. CHRISTOPHER SMITH/ Tulsa World 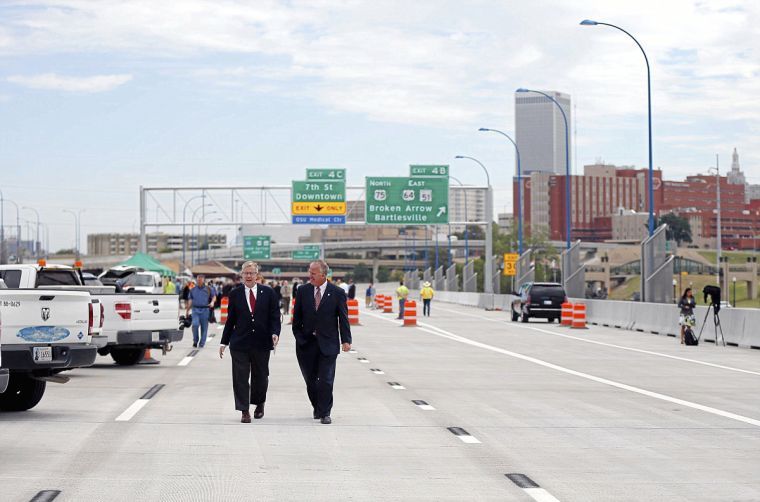 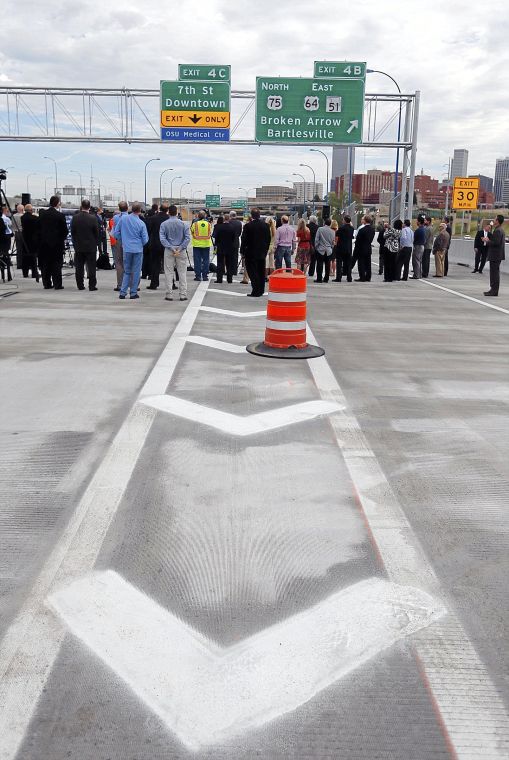 People congregate on the new eastbound I-244 bridge over the Arkansas River at the ribbon cutting ceremony in Tulsa, Ok, Sep. 15, 2014. STEPEHN PINGRY/Tulsa World 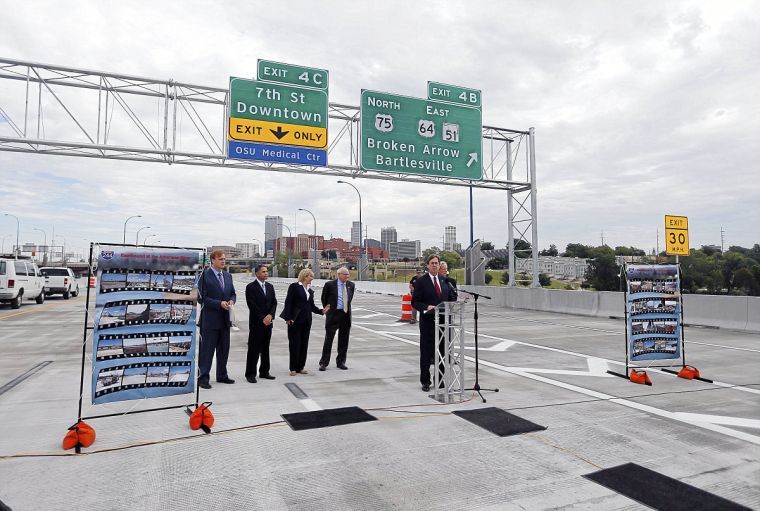 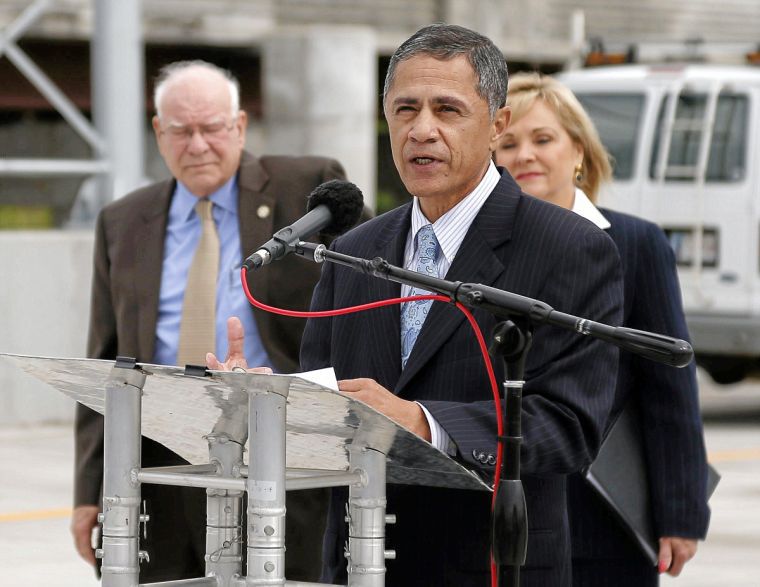 U.S. Deputy Secretary of Transportation Victor Mendez talking about the opening of the new Eastbound I-244 bridge over the Arkansas River at a ribbon cutting ceremony in Tulsa, Ok, Sep. 15, 2014. STEPEHN PINGRY/Tulsa World 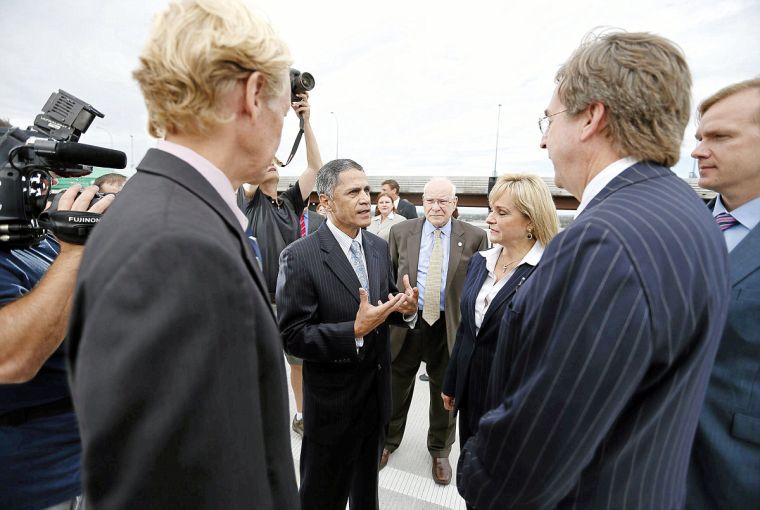 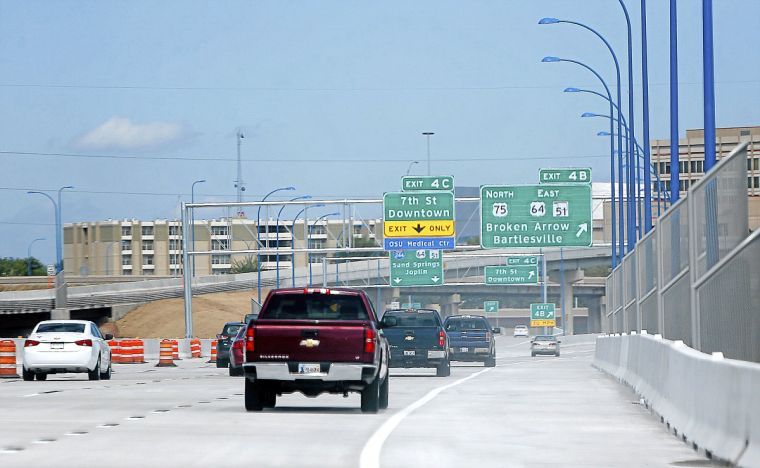 Traffic moves along the I-244 bridge over the Arkansas River after it was opened Monday September 15, 2014. CHRISTOPHER SMITH/ Tulsa World

The new eastbound Interstate 244 bridge over the Arkansas River opened to traffic about 1 p.m. Monday.

A light rain had delayed the opening of the bridge Monday morning. A final bit of striping on the bridge had to be delayed due to moisture on the new highway.

The weather didn’t stop a host of local, state and federal dignitaries from heralding the opening of the structure across the Arkansas River.

Gov. Mary Fallin told a group of about 100 people on the bridge Monday morning for the dedication ceremony that it was a “great day in Tulsa.”

“It’s exciting to see this day finally come, the gateway … to downtown Tulsa, to have a wonderful new bridge,” Fallin said, amid the occasional honking from passing semi-trucks.

Fallin said she appreciated the patience of Tulsa motorists during the construction.

“I’ve always told our friends in Tulsa if there’s some orange barriers or yellow cones or whatever they might be, that’s a sign of progress because that means we’re spending money on our infrastructure,” Fallin said.

Prior to construction of the new east- and westbound spans, the previous structures, built in 1967, had been on the list of Oklahoma’s structurally deficient bridges. The state Department of Transportation was spending about $1 million a year to repair them.

The $41 million bridge project was launched in June 2013 with the demolition of the older structure.

Eastbound I-244 traffic had been squeezed onto the westbound bridge while the new bridge was under construction.

Traffic across the Arkansas River has been detoured since mid-2011, beginning with construction of the westbound span. An estimated 70,000 vehicles travel the corridor every day on average.

The westbound bridge — a $78 million double-deck, multimodal project — opened to traffic in December 2012.

Oklahoma Department of Transportation Executive Director Mike Patterson said that as the eastbound bridge is opened, it will take “a little bit” to remove all the construction barriers.

“We’re going to have to unwind the detour,” Patterson said, urging motorists to utilize caution in the area over the next few days.

All highway lanes and ramps will be opened over the next several weeks, said Kenna Carmon, an ODOT spokeswoman.

The Seventh Street exit to downtown Tulsa from the eastbound I-244 bridge reopened Monday, too.

Once the highway portion is complete, crews will focus on the trails underneath the bridge. Work on a viewing platform that overlooks the Cyrus Avery Plaza and the historic 11th Street bridge will also continue.

The entire project is expected to be complete by spring, including the reopening of the southwest leg of the Inner Dispersal Loop, which connects westbound U.S. 64/Oklahoma 51 to northbound and southbound U.S. 75, officials said.

Mendez lauded the city for preserving a bridge adjacent to the newly constructed one, the Cyrus Avery Route 66 Memorial Bridge.

“It’s a part of history as a nation, and to be able to preserve that, I think, says a lot about what we do in transportation because these are important for us,” Mendez said.

The State Auditor and Inspector found oversight to be lacking on the part of Epic’s "handpicked" governing board members. #oklaed

14% of Tulsans are Black compared to 8% of Tulsa police. Why are minorities underrepresented in law enforcement?

“We want to have a force that is reflective of our community but ... also want people that want to do this job," an official said. Law enforcement diversity is drawing attention as allegations increase of racial injustice at the hands of police.

Traffic moves along the I-244 eastbound bridge over the Arkansas River after it was opened Monday. CHRISTOPHER SMITH/ Tulsa World

People congregate on the new eastbound I-244 bridge over the Arkansas River at the ribbon cutting ceremony in Tulsa, Ok, Sep. 15, 2014. STEPEHN PINGRY/Tulsa World

U.S. Deputy Secretary of Transportation Victor Mendez talking about the opening of the new Eastbound I-244 bridge over the Arkansas River at a ribbon cutting ceremony in Tulsa, Ok, Sep. 15, 2014. STEPEHN PINGRY/Tulsa World

Traffic moves along the I-244 bridge over the Arkansas River after it was opened Monday September 15, 2014. CHRISTOPHER SMITH/ Tulsa World