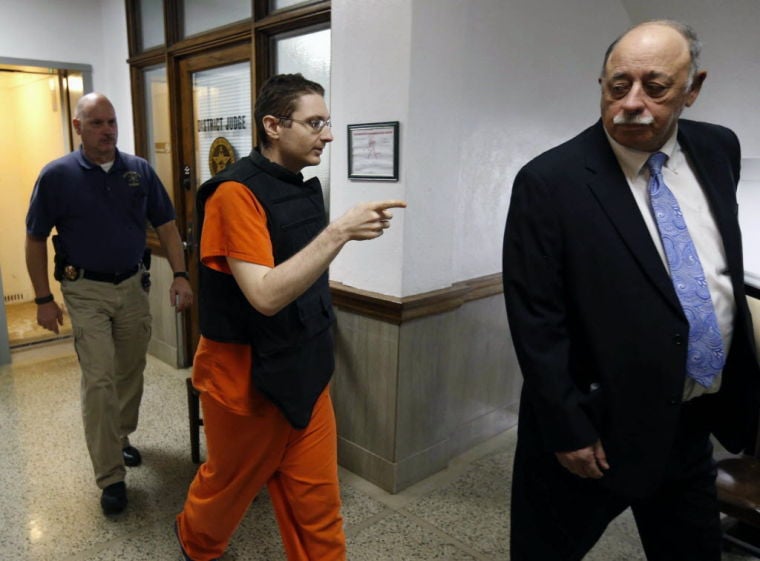 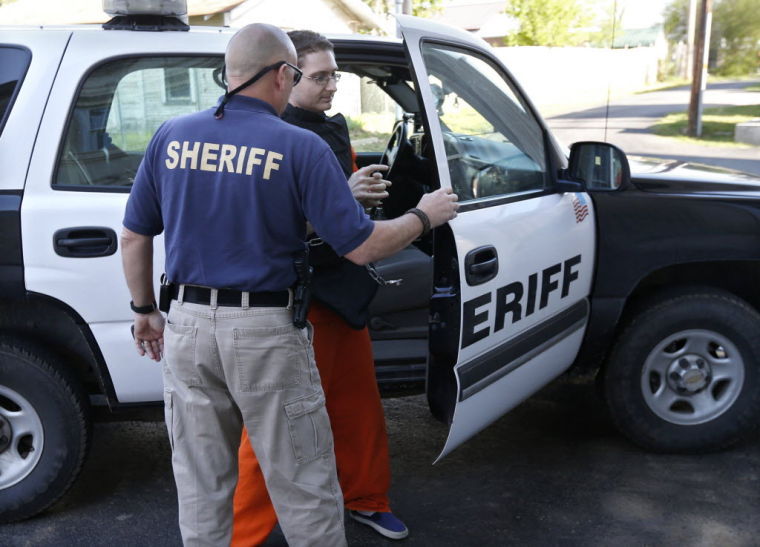 Murder suspect Kevin Sweat is led to a hearing at the Okfuskee County Courthouse in Okemah, Okla. on Tuesday, April 22, 2014. MATT BARNARD/Tulsa World

OKEMAH -- A competency hearing for the suspect in the killings of his fiancée and two Weleetka girls dissolved into multiple hours of questioning as to whether the defendant has Asperger's syndrome or autism.

Kevin Sweat appeared in Okfuskee County District Court on Tuesday for continued hearings on whether he was mentally competent when he waived his Miranda rights before confessing to investigators that he shot two Weleetka girls and killed his fiancée.

Sweat faces three counts of first-degree murder in the 2008 deaths of Skyla Whitaker and Taylor Paschal-Placker outside Weleetka and the 2011 death of his fiancée, Ashley Taylor.

He gave contradictory or evasive answers on a battery of psychological tests that examined his personality traits and understanding of Miranda rights, a forensic psychologist testified Tuesday.

Despite Sweat's conflicting answers, Dr. Shawn Roberson said he found no evidence of mental confusion, illness or deficiencies even though Sweat repeatedly refused to answer "very basic" questions about his personality that most criminal defendants will answer. Roberson also testified that he found no evidence of Sweat's having autism or Asperger's, despite another defense psychologist's raising the issue in a separate, unpublished report.

The report that supposedly diagnosed Sweat as autistic or having Asperger's was never entered into evidence or examined in open court prior to Tuesday's hearing, which left Judge Lawrence Parish frustrated that defense attorney Gretchen Mosley devoted several hours to examining the issue.

"What evidence does this court have that your client has been diagnosed with Asperger's?" the judge asked after Mosley spent a considerable amount of time questioning the state's psychologist regarding his expertise in autism.

A psychologist who previously testified for the defense has said Sweat suffers from mental confusion and could not have made a knowing, voluntary waiver of his Miranda rights. But that psychologist did not testify about Sweat's having autism or Asperger's, prosecutors noted.

Parish allowed the other psychological evaluations to be entered as evidence Tuesday but said he would give them "whatever worth" he decided they merited.

The hearing was supposed to focus on the state's evaluations of whether Sweat was competent and understood that he had waived his rights to remain silent and to have an attorney present before he told an OSBI investigator that he shot what he thought were two "monsters" on an Okfuskee County road in 2008.

Roberson, an expert in forensic psychology, testified that Sweat gave answers that contradicted facts established by documents, witnesses and evidence elsewhere about his personality and history.

"He presented himself far differently in my evaluation than others described him in witness statements," Roberson said.

Witnesses described Sweat as a loner who could be awkward and aloof at times, who was into heavy metal music and goth culture as a high schooler, and who was interested in weapons and violent films. Sweat described himself differently to Roberson and lied about his history of drug use and the number of girlfriends he'd had, Roberson testified.

Sweat denied having an interest in weapons or serial killers, something that contradicted his own writings and website postings.

"I got the sense that he didn't want me to know a lot about him," Roberson testified, saying Sweat commonly answered "not that I recall" to many of the questions.

Sweat also scored unusually low -- in the bottom 4th percentile -- on a test regarding Miranda rights knowledge, which Roberson said seemed "surprising," considering that the defense's own testing previously showed that he understood the concept of Miranda rights.

A recording of a courthouse conversation between Sweat and his mother also seemed to indicate that he understood the concept of Miranda rights, a rule given by police to criminal suspects in custody that explains their constitutional rights.

Sweat's statement that he shot at two monsters and may have been seeing demons were made during a 2011 videotaped confession that the state plans to use as a key piece of evidence of his guilt at trial, if the judge rules that the confession was knowing and voluntary.

The case is set to begin trial in the Creek County Courthouse in Bristow in August because defense attorneys requested a venue change last year. But the case has continued to move at a snail's pace, as Tuesday's hearing was actually the continuation of a January hearing.

At the January hearing, Bruce Frumkin, a forensic psychologist for the defense, testified that Sweat wasn't able to give a "knowing and intelligent" waiver of his Miranda rights before that confession.

Frumkin testified in January that he administered a "typical battery" of almost a dozen tests to determine whether Sweat could have knowingly and intelligently waived his Miranda rights at the time of his 2011 interrogation.

He testified that although Sweat scored "really well" on two of the three tests regarding his ability to understand waiving his Miranda rights, several tests showed problems with the way he perceives or processes information.

"Things get jumbled up in his brain," Frumkin told the court.

The officers reading his rights out loud may have read them too quickly for Sweat to fully understand, he said.

Roberson contradicted many of Frumkin's findings Tuesday, saying he was of average intelligence, had attended college and had the capacity to understand his Miranda warnings at the time his confession was recorded.

Blizzard warnings issued for states in the northeast

Blizzard warnings issued for states in the northeast

Zane Bennett, 20, was arrested on a complaint of manufacturing an explosive. His girlfriend, Mariah Davis, is accused of shoplifting Lego sets from a Walmart near where she was stopped by police Monday.

Broken Arrow and Tulsa police were investigating a possible explosive device found in a car during a traffic stop near Kenosha (71st) Street and the Creek Turnpike, Broken Arrow police said in a news release.

Shawn Michael Carnahan, 37, is accused of causing a blaze that spread across multiple units at the Cobblestone Apartments near 51st Street and Memorial Drive.

Police say Hale was shot at a home near 21st Street and 129th East Avenue while attempting to sell a gun to a person he met in the neighborhood.

Chickasaw Nation Gov. Bill Anoatubby said the court’s action “establishes a new level of certainty and finality” to the decision in the McGirt v Oklahoma case and the related cases affirming five other reservations in Oklahoma.

Ruling in a case in which a woman was charged with first-degree manslaughter in the death of her unborn child, the appeals court affirmed a decision by a Comanche County judge that medical examiner’s evidence didn’t support the allegation that the death was caused by the woman’s drug use.

A Mounds man was sentenced to life in federal prison Thursday after a jury found him guilty of killing a man in east Tulsa in 2020.

A man who police and federal prosecutors say made an explosive device out of fireworks, fishhooks, rivets and other materials was charged Wednesday in the federal Northern District of Oklahoma, U.S. Attorney Clint Johnson announced.

Murder suspect Kevin Sweat is led to a hearing at the Okfuskee County Courthouse in Okemah, Okla. on Tuesday, April 22, 2014. MATT BARNARD/Tulsa World