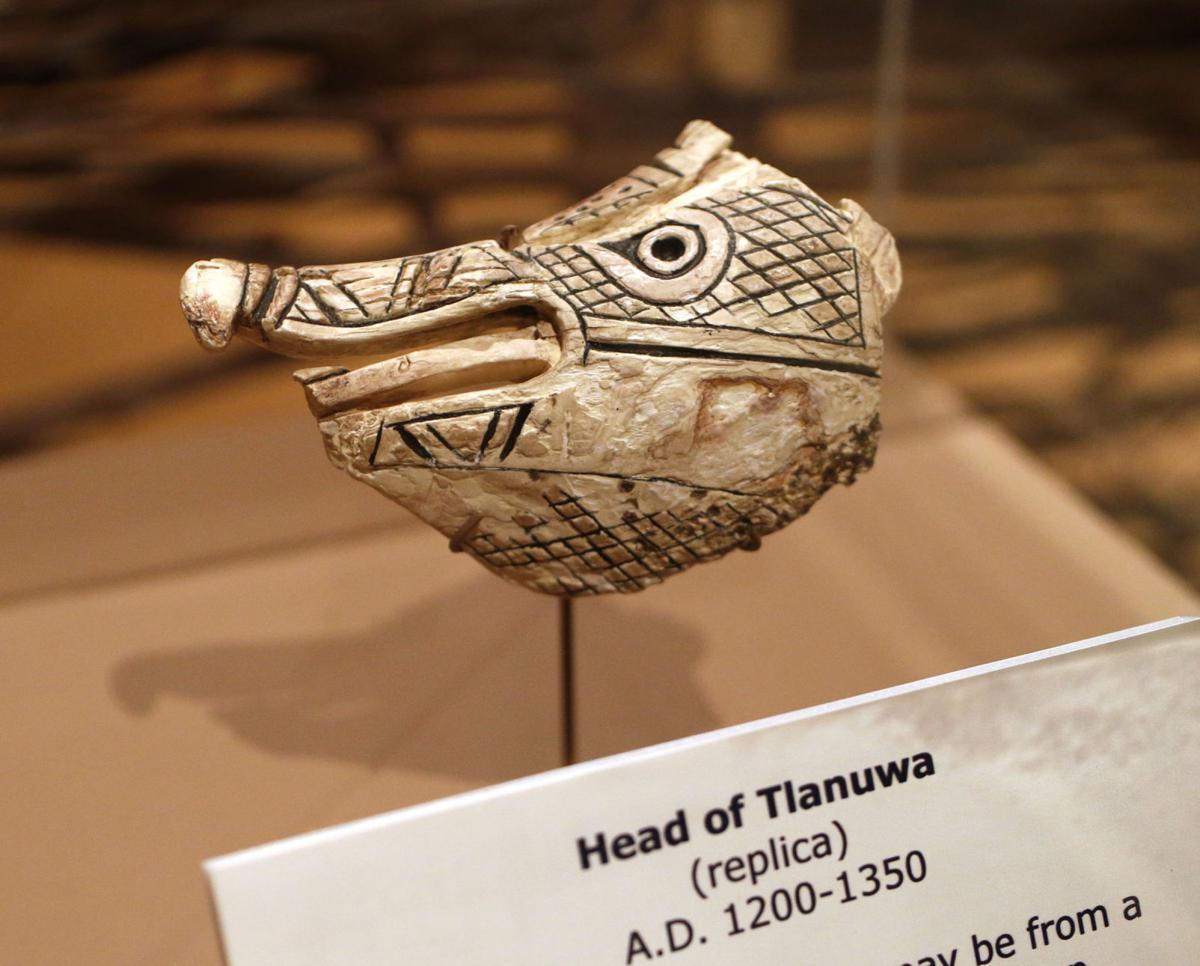 A replica carving is on display at the Spiro Mounds Archaeological Center near Spiro. MATT BARNARD/Tulsa World 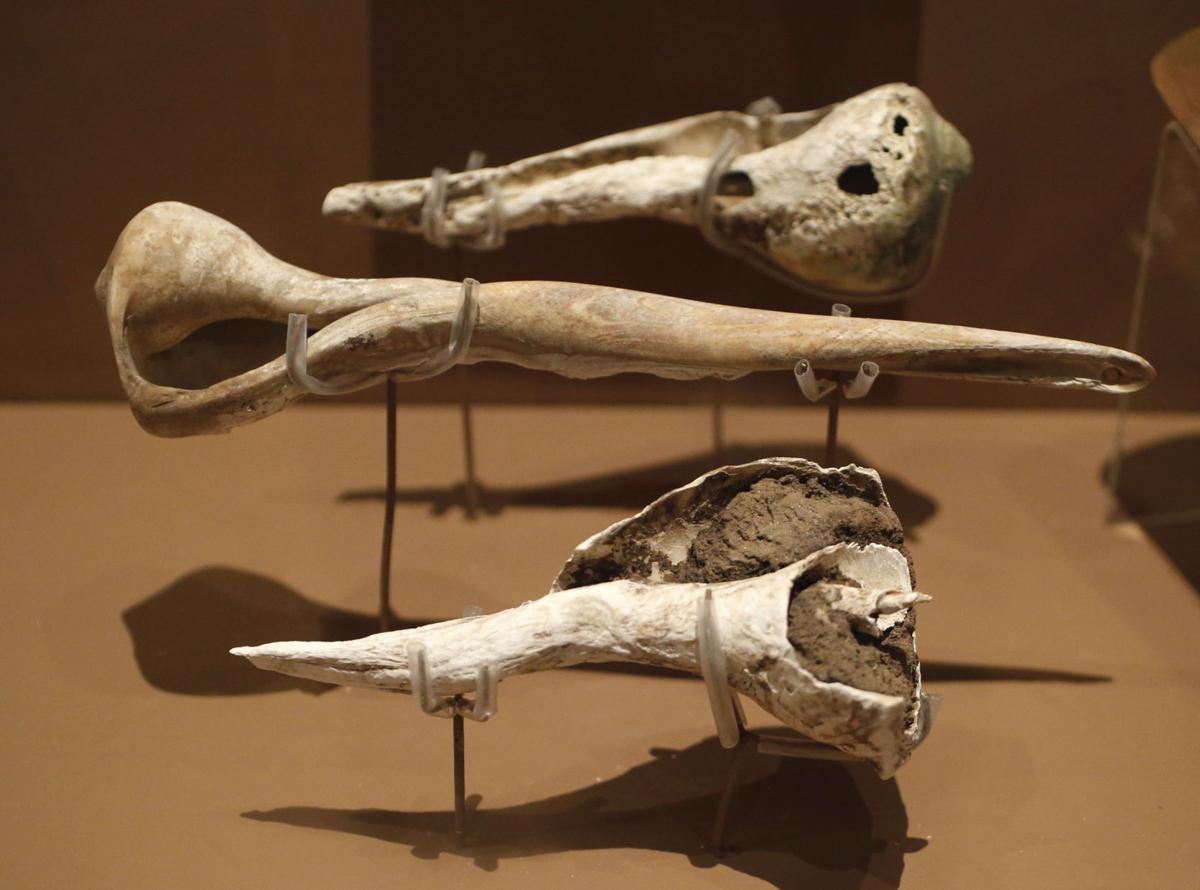 Items are on display at the Spiro Mounds Archaeological Center in Spiro. MATT BARNARD/Tulsa World 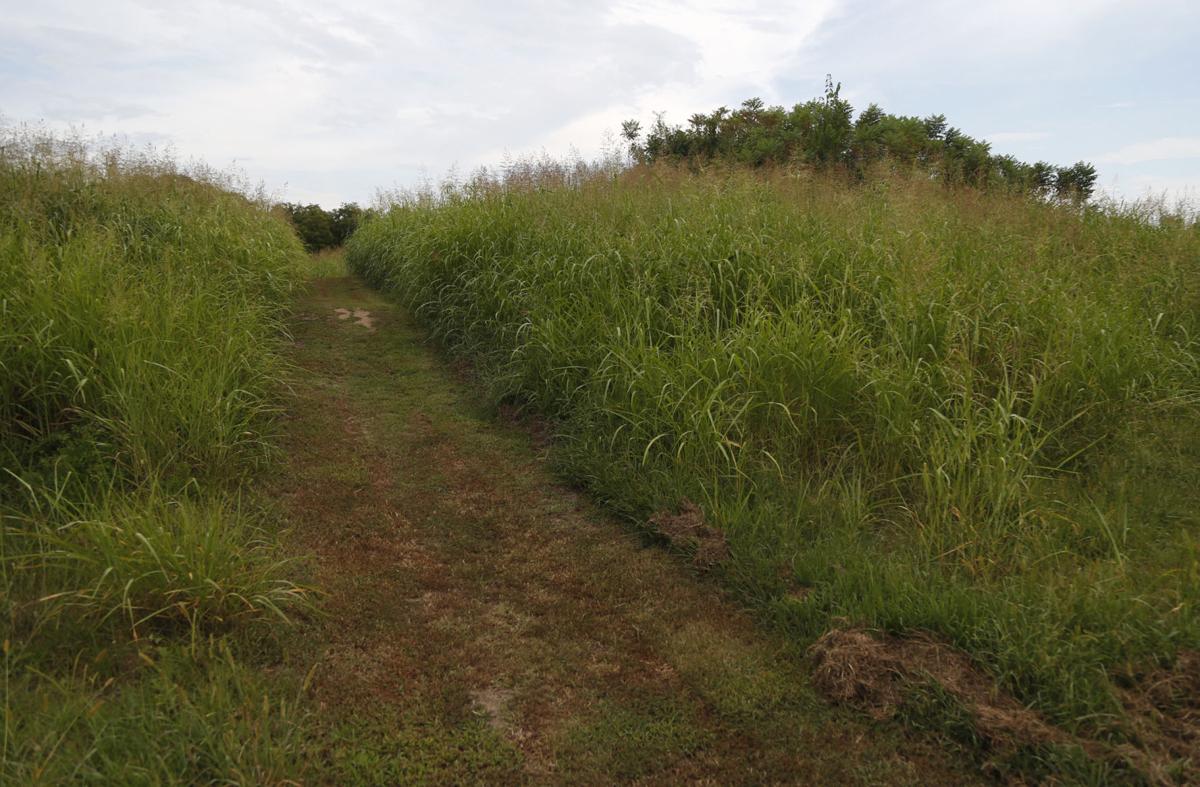 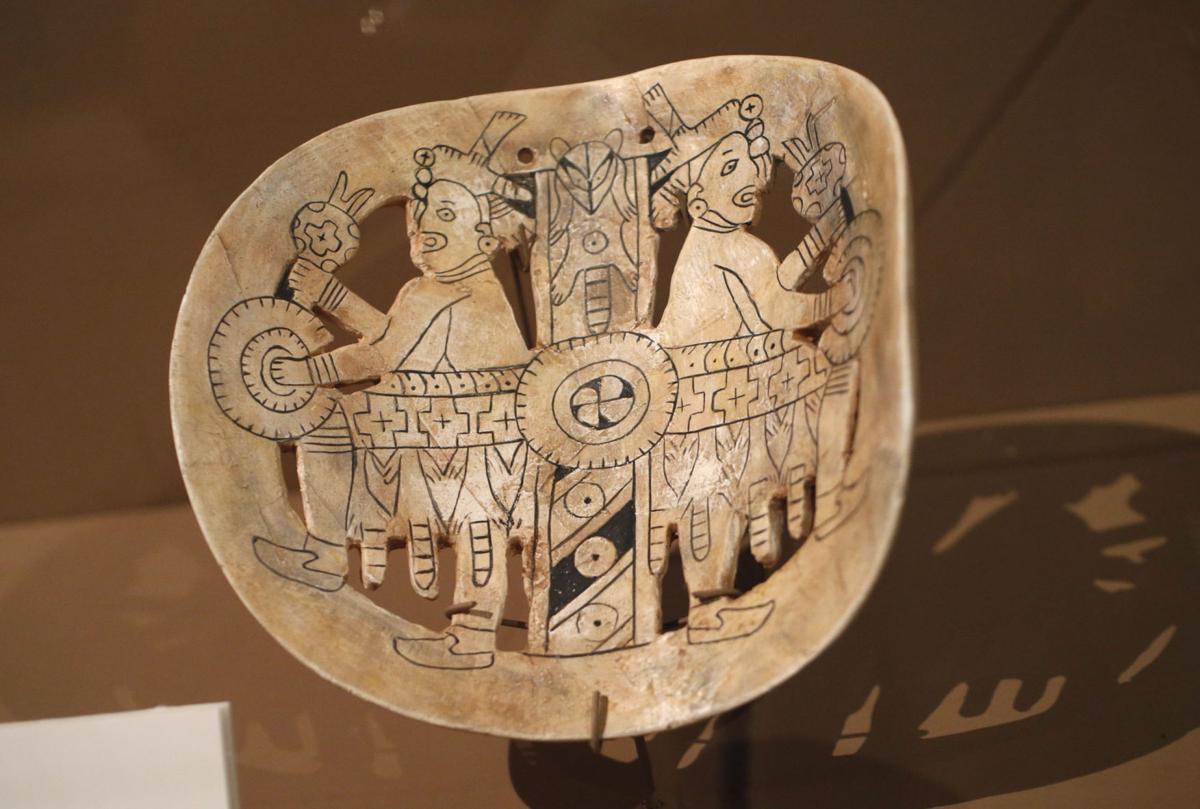 A conch shell pendant is on display at the Spiro Mounds Archaeological Site. MATT BARNARD/Tulsa World

Some estimate as many as 100,000 artifacts from the Spiro Mounds Archaeological Center have been sold or donated to museums or came into private ownership all over the world.

“I think that estimate might even be a little low,” said Scott Hammerstedt of the Oklahoma Archeological Survey in Norman. “I don’t think you could track it all down.”

Artifacts from Spiro Mounds have been documented in at least 65 facilities around the world, from the Louvre in Paris to the Gilcrease Museum in Tulsa.

“About 95 percent of Spiro is from one mount and from commercial digs in the 1930s,” he said. “But we do have a hard time getting funding. Archaeology is not cheap, and it is very slow work.”

Spiro Mounds, which is about 20 miles north of Poteau, may be the most obvious archaeological dig that remains “undiscovered,” but there are spots all across Oklahoma that have gone unexplored.

Hammerstedt estimates there could be as many as 25,000 possible sites around the state.

“We have things and stuff that no one else has,” he said.

The reason so much has gone undiscovered is pretty obvious. Oklahoma has no money to undertake the type of careful research that would be needed at sites around the state.

The last major dig at Spiro Mounds was more than 30 years ago, though work goes on at various spots.

Many of the artifacts in museums around the world were uncovered and sold during private digs authorized back in the 1930s. That’s when descendents of the original landowners of the Spiro Mounds sold digging rights to anyone willing to pay.

“Spiro Mounds is one of the most (famous) archaeological sites in the nation,” said Peterson. “There was that period of commercial digs back in the 1930s when anyone who could pay was allowed to dig and look for artifacts. That’s how many of the artifacts got uncovered and sold to museums and investors all over the world.

“We’ve had people refer to Spiro Mounds as the King Tut of the west. There is a vast amount of artifacts still in the ground here.”

That’s because most of the 12 mounds were not discovered until after the site was preserved and became off-limits to commercial digs.

“Spiro is such a unique archaeology site,” said Hammerstedt. “There’s a lot of spectacular stuff.”

Spiro Mounds was a city of about 10,000 people and is believed to have been the capital of a region that encompasses about two-thirds of the present-day United States.

As such, it was a major city long before the European discovery of North America. It had goods and materials brought to this location from as far away as modern-day Florida to the Great Lakes to modern-day California.

“As a result, we believe there is a large amount of goods of artistic significance here at Spiro Mounds,” said Peterson. “There is more fabric and copper and other type of artifacts than we have even imagined. We have done enough testing to know we are sitting on top of an unbelievable amount of artifacts.

“We’ve done scientific studies that reveals layers of burial mounds with decades of artifacts from different periods. There are literally millions of artifacts here that have not been uncovered.”

Gilcrease Museum has the largest collection of Spiro Mounds artifacts on display. Artifacts are also exhibited in the Sam Noble Oklahoma Museum of Natural History and in four museums of the Smithsonian in Washington, D.C.

The city at Spiro Mounds is believed to have been connected to some 60-plus tribes. It was a thriving center of civilization from about 700 to 1500.

“This place was a big deal to their civilization a thousand years ago,” said Peterson. “Spiro Mounds was the center of their universe.

“We believe there were about 250,000 people living in the Arkansas River basin a thousand years ago. There could be 25,000 prehistoric sites in this region. Spiro is the only one you can currently visit.”

But, like so many other archaeological sites, there is so much more to know.

However, in a state where state budget cuts have been the norm in recent years, archaeological digs are pretty far down the priority list. As such, these sites, just like Spiro Mounds, will remain undisturbed with artifacts that could be unearthed in the future.

“There is an incredible storehouse of information right here in eastern Oklahoma on the south bank of the Arkansas River waiting to be discovered,” said Peterson.

A replica carving is on display at the Spiro Mounds Archaeological Center near Spiro. MATT BARNARD/Tulsa World

Items are on display at the Spiro Mounds Archaeological Center in Spiro. MATT BARNARD/Tulsa World

A conch shell pendant is on display at the Spiro Mounds Archaeological Site. MATT BARNARD/Tulsa World