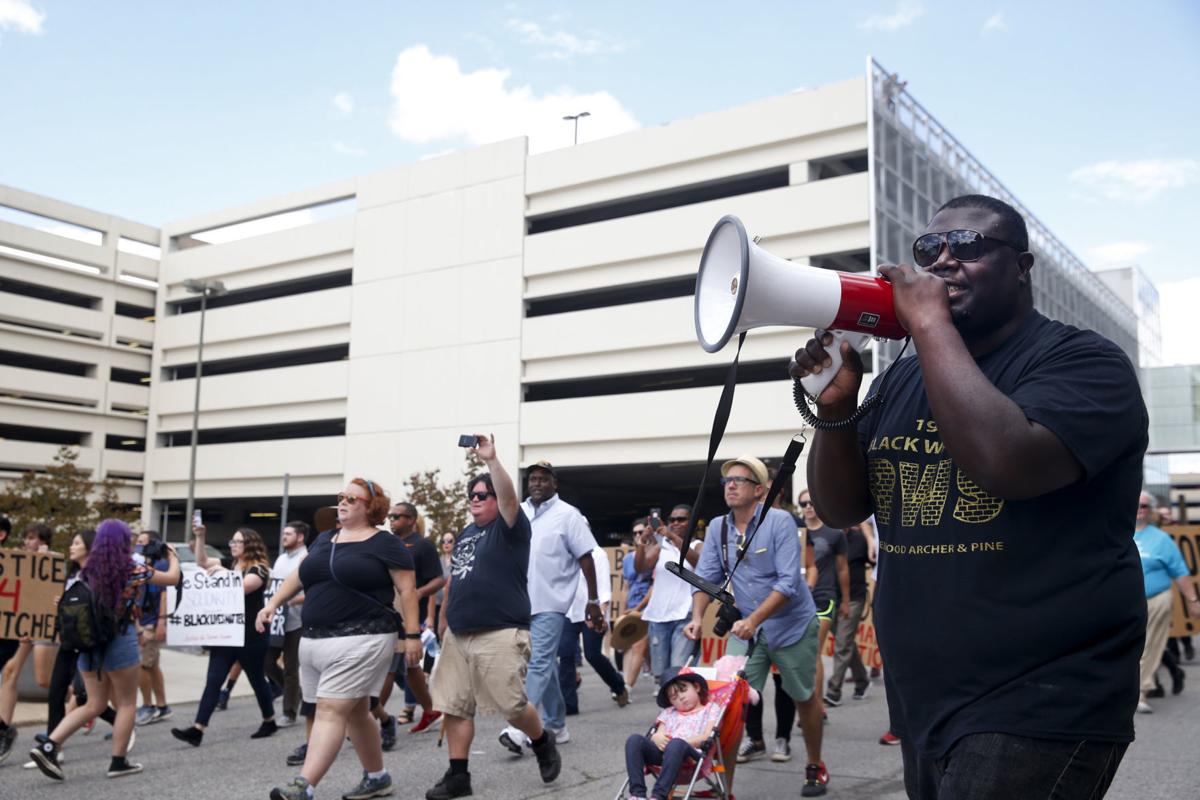 We The People’s Marq Lewis leads a group of protestors in a chant while protesting the death of Terence Crutcher on Sept. 24, 2016. IAN MAULE/Tulsa World file 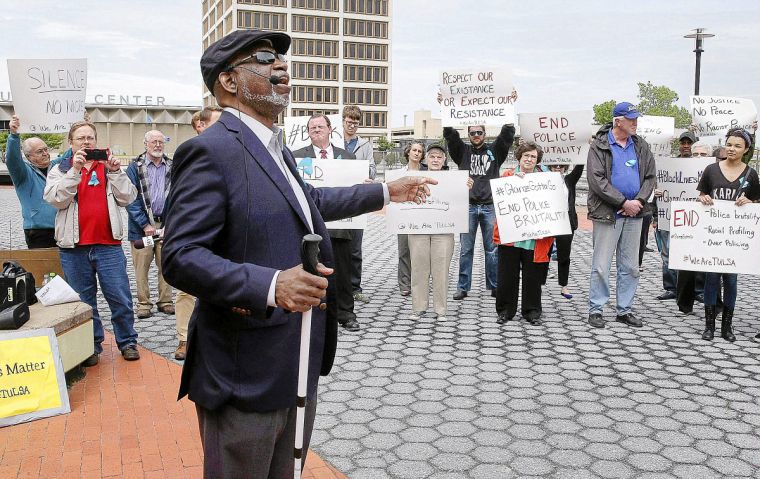 The Rev. Gerald L. Davis speaks during a rally, put on by The United League for Social Action (TULSA), on the Tulsa Courthouse Plaza on May 13, 2015. Tulsa World file

Ron Halford remembers his parents screaming at the television in frustration over news that someone who looked like him had suffered an injustice and nothing would be done to rectify it.

Nearly a half-century later, Halford — with his hair showing signs of gray — admitted that he’s recently conducted himself in the same fashion.

Halford thought he was expressing a similar incredulity as his parents. But his annoyance was that he was still living during a time in which those wrongs existed.

These days, Halford doesn’t shout at the television quite as much after deciding — when Eric Harris was fatally shot by Tulsa County Reserve Deputy Robert Bates in 2015 — to do something about it in the form of activism.

Among the group’s immediate goals were to attempt to change the policies of law enforcement agencies throughout Oklahoma. Even in its infancy, TULSA called for then-Tulsa County Sheriff Stanley Glanz to resign, demanded a system of transparency based on national standards for policing and pressed city leaders to engage in implicit bias training.

‘Getting to the root cause of why these inequities exist’

That mentality has driven several Tulsa-based activist groups in pursuit of advocating for justice and equality for all citizens, particularly those who represent historically marginalized communities.

They’ve rallied on the grounds of City Hall, been a presence in the streets following officer-involved shootings and voiced communal concerns at City Council meetings.

These pairings of millennials and baby boomers made up of teachers, clergy and even therapists have fought to hold public officials accountable for what they perceive are harmful practices and apathetic attitudes towards racial disparities.

An example of that played out recently with Demanding a JUSTulsa being at the forefront of the discussion about community policing related to a Tulsa Police Department Gang Unit operation at the Towne Square Apartments earlier this month.

The coalition, which includes Kristi Williams, Gregory Robinson II, Nate Morris and others, crafted an open letter to Mayor G.T. Bynum saying that a heavy TPD presence at the apartment complex worsened the relationship between African Americans and police.

“I’ve seen firsthand the damage that mistrust between citizens and the police department can have,” said Robinson, a lifelong Tulsan who felt the urgency to engage in activist work after being exposed to years of inequity. “That’s why I joined JUSTulsa.”

JUSTulsa first gained notoriety in April when it delivered a letter to City Hall requesting transparency regarding the city’s 2018 Equality Indicators Report.

They wanted city officials to discuss the report’s findings at special meetings and for the public to be present at them.

“That letter is why we have these special Equality Indicators meetings right now,” Robinson said of the open forums. “For us, this is not about having a gotcha moment. It’s not about having an us-vs.-them or getting rid of certain officers. This is about getting to the root cause of why these inequities exist.”

Vandeventer, who is white, came to understand that “putting a dent in racism is the work of white people” since they, in her opinion, had the most influence in dismantling the practice.

‘Have a space to take action’

Vandeventer, and co-founder David Harland, established Aware Tulsa four years ago to seek equality for minorities. The predominantly white group was also created to provide a space for white Tulsans to examine racism’s impact and formulate a plan to combat it through partnerships with other minority-led outfits.

“There are white folks who were well-intended but did not know how to navigate that space to be helpful,” said Vandeventer, who acknowledged that some whites are unable to reconcile also being affected by white privilege. “What motivates me is how I can help white folks have a space in which to heal, to take action and to put a dent in white supremacy.”

Harland, who emphasized the group does not want to center its own whiteness in racial justice efforts, sees the work as educating white people on social issues through a lens they have not been forced to confront.

“That’s systemic and intended by the system,” he said. “It is an important thing for us to break toward the progress of eliminating racism. Everybody knows racism is charged. Nobody wants to be called a racist. To get a group of white folks who don’t have to — where society is not forcing them to — to open themselves up to be vulnerable about how they relate to it (racism) ... that has to be a safe space for them to do that in.”

For Marq Lewis with We the People Oklahoma, the motivation for social involvement — like other local citizen-led groups — has been trying to overhaul the ways in which Tulsa’s black citizens are policed compared to the rest of the city’s population.

Lewis, an East Coast-bred filmmaker with an established activism background, started his work in Tulsa after 19-year-old Jeremey Lake was shot and killed by off-duty Tulsa Police Officer Shannon Kepler in 2014. The case, according to Lewis, displayed an all-too-familiar occurrence of police misconduct.

“How is it that a person who is a police officer, someone who is sworn to protect us, goes to find an individual who is African American — you go gun him down because he’s with your white daughter?” said Lewis. “That is what really sparked our attention in being a voice for the voiceless.”

In the wake of the Lake killing and other shootings, We the People demanded police officers wear body cameras and suggested such cases be reviewed by independent authorities.

Lewis has maintained that the group is not anti-police. But it has not stopped the organization from challenging the Sheriff’s Office, Police Chief Chuck Jordan and Bynum to alter policies that create an environment where African American residents are made vulnerable to law enforcement abuse.

‘Not talking about it means it’s not going to change’

“I don’t see anything changing until the mayor sits back and says, ‘What is it that we need to do to change about these policies? What are the type of policies that we need to look to change that is fair to its citizens?’ ” said Lewis.

While the growing Tulsa activism community desires more than the incremental symbolic gestures, some solace lies in the realization that those who wield true power hear them and understand the movement isn’t going away.

Read the story: 'We have to realize we're one city': Discussion on Equality Indicators offers chance at dialogue

The United League of Social Action

Mission: Aware Tulsa was founded in the wake of the officer-involved shooting death of Eric Harris. It is part of SURJ international; a group that believes in equality and justice for all people.

We The People Oklahoma

Mission: Strives for police accountability and a overhaul of policies to reduce bias in policing.

Mission: A local campaign working for police accountability in Tulsa.

We The People’s Marq Lewis leads a group of protestors in a chant while protesting the death of Terence Crutcher on Sept. 24, 2016. IAN MAULE/Tulsa World file

The Rev. Gerald L. Davis speaks during a rally, put on by The United League for Social Action (TULSA), on the Tulsa Courthouse Plaza on May 13, 2015. Tulsa World file