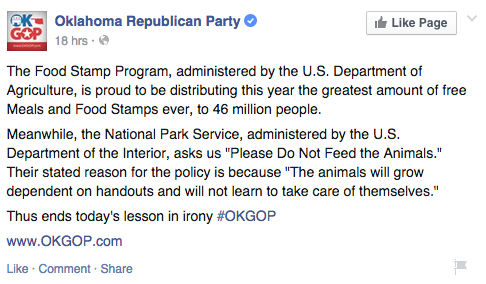 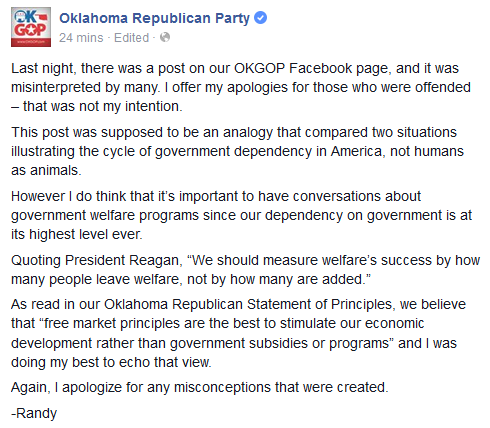 A Monday post on the party’s Facebook page said: “The Food Stamp Program, administered by the U.S. Department of Agriculture, is proud to be distributing this year the greatest amount of free Meals and Food Stamps ever, to 46 million people.

“Meanwhile, the National Park Service, administered by the U.S. Department of the Interior, asks us ‘Please Do Not Feed the Animals.’ Their stated reason for the policy is because ‘The animals will grow dependent on handouts and will not learn to take care of themselves.’

Several lawmakers took to social media to criticize the comment.

“The post needs to be taken down and an apology needs to be issued,” wrote Sen. Kim David, R-Porter, on her Facebook page.

Sen. Stephanie Bice, R-Oklahoma City, called the post “crass and offensive.” She said the post made the party look uncaring.

She urged Oklahomans to support a local food pantry or the Regional Food Bank of Oklahoma.

Mark Beutler, a DHS spokesman, said Tuesday that in June, 604,628 people were in the state’s Supplemental Nutrition Assistance Program, formerly called food stamps. Of that number, more than 350,000 are people who are seniors, disabled or children, he said.

Only a very small percentage, 2.1 percent, are able-bodied adults, and those individuals are required to work, he said. He said the program was never intended to be a person’s sole source of food but to supplement it.

“SNAP is designed to help put food on the table for those who need it most,” Beutler said. “Imagine your grandmother or elderly parent who has worked their entire life only to be hungry in their golden years, or the disabled vet who fought for his country and can’t afford to buy groceries, or children who look for food in an empty refrigerator. That’s what SNAP is designed to do — to help feed people who need it most. Comparing hungry Oklahomans to animals is appalling.”

Later in the day Tuesday, the GOP’s post was removed. Another post signed by “Randy” attempted to clarify the original message.

“Last night, there was a post on our OKGOP Facebook page, and it was misinterpreted by many. I offer my apologies for those who were offended — that was not my intention. This post was supposed to be an analogy that compared two situations illustrating the cycle of government dependence in America, not humans as animals.”

The Oklahoma Department of Human Services, which administers the state’s Supplemental Nutrition Assistance Program, posted a Facebook comment in response to the original state GOP post, saying in part:

“Shame on you for comparing people in poverty and with disabilities to animals! That was an appalling and uninformed comment. Obviously you did not bother to know the majority of the 604,000 people receiving food benefits in Oklahoma are people who are aging, people with disabilities (including disabled veterans) and the working poor who are raising children.”

Gov. Mary Fallin said Tuesday that she accepted Brogdon’s explanation and appreciated his decision to remove the original post.

“Welfare programs and welfare reforms are important subjects that we need to have a respectful, thoughtful conversation about as a nation,” Fallin said. “Programs like food stamps have an important role. We don’t want any American families to fall through the cracks or go hungry.”

It is not the first time the comparison has been used. A Republican South Dakota candidate in 2014 posted a similar phrase on her Facebook page.

Controversy hit the state Republican Party earlier this year over the hiring of Thomas Clint “T.C.” Ryan. Ryan pleaded guilty in 2012 to domestic assault and battery in the presence of a minor child and interference with an emergency telephone call. He received a deferred sentence on the misdemeanor charges. The case was dismissed and his record expunged.

He resigned June 24 following an outpouring of criticism.

Official: I-40 bridge could be closed for 'months'

Official: I-40 bridge could be closed for 'months' 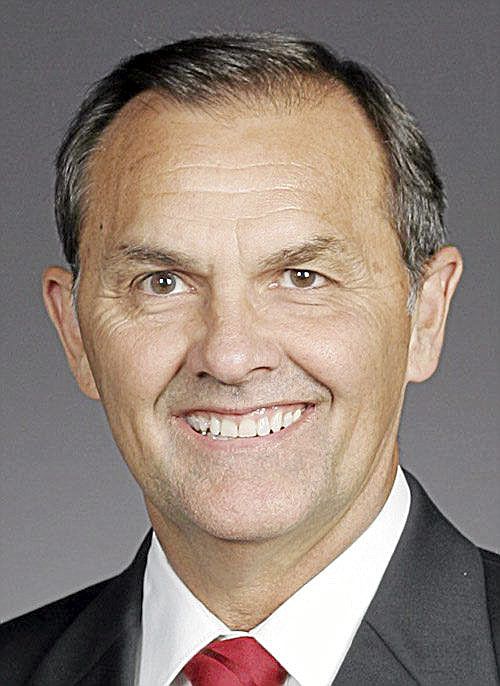