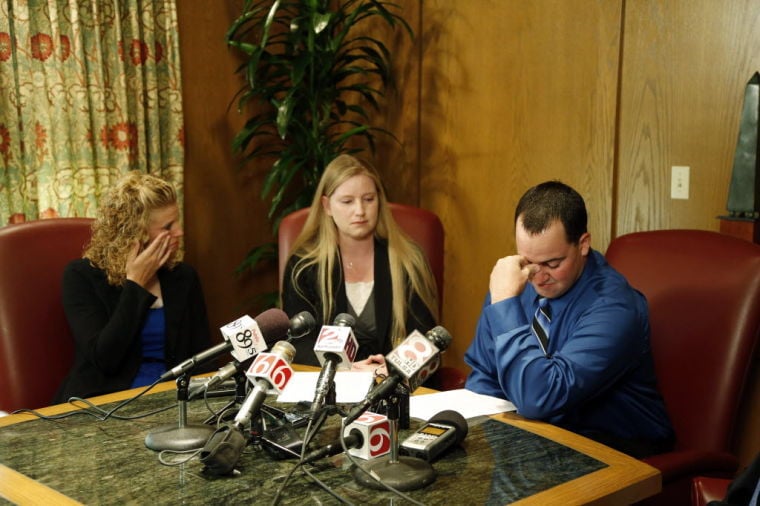 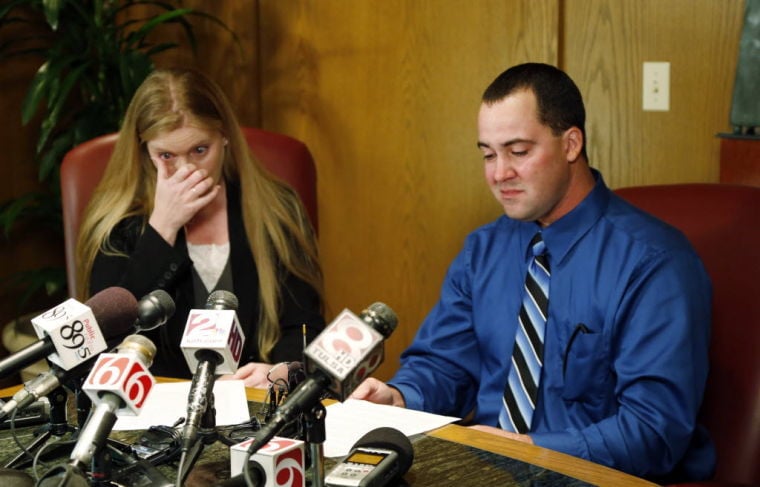 From left, Chrissi Nimmo the assistant attorney general for the Cherokee Nation and Dusten Brown announcing no more litigation in the Baby Veronica case Thursday in Tulsa. STEPHEN PINGRY/Tulsa World

Ending a custody battle that stretched across two states and dragged on for nearly four years, Dusten Brown will drop all litigation in the "Baby Veronica" case, he announced Thursday.

"I cannot bear to continue it any longer," Brown said, holding back tears. "I love her too much to continue to have her in the spotlight."

With no realistic chance of getting the 4-year-old girl back from her adoptive parents in South Carolina, Brown and the Cherokee Nation called a press conference to explain why they would dismiss their appeals with the Oklahoma Supreme Court.

Brown faced difficult decisions that "no father should ever have to make," he said.

"The most difficult decision of all was to let Veronica go with Matt and Melanie Capobianco last month," Brown said.

"It was no longer fair for Veronica to be in the middle of a battle. It was the love for my daughter that finally gave me the strength to let go of things I can no longer control."

The decision came 17 days after Brown handed the girl over to the Capobiancos, who took Veronica back to the suburbs of Charleston, where they had raised her for the first two years of her life.

The handover came after several weeks of court hearings in more than half a dozen counties across Oklahoma as Brown and his tribe tried to fight court orders from South Carolina to change custody.

The state Supreme Court initially agreed to keep Veronica in Oklahoma while the appeals went forward. But the justices reversed the ruling Sept. 23, and Brown handed over the girl within hours.

Brown broke down several times while reading his statement, part of which was addressed to his daughter.

Brown still faces a felony complaint in South Carolina for not handing over Veronica sooner. And both Brown and the Cherokee Nation are facing contempt of court proceedings, in which the Capobiancos have asked to be compensated for legal fees and other expenses.

A tribal attorney called on the Capobiancos to drop the contempt of court proceedings and to use their influence to have the criminal charges dropped, too.

"We're asking you to listen to your heart," Chrissi Nimmo said, "and do the right thing."

While it was Brown's decision to end the legal battle, the tribe supported it, she said.

"We lost that legal battle," Nimmo said. "And now the best thing for Veronica is for the litigation to end and the healing to begin."

Brown won custody of Veronica in 2011 after courts in South Carolina ruled that he hadn't given "voluntary consent" to the adoption, as required under the federal Indian Child Welfare Act, which was intended to keep Native American children with their tribes.

The U.S. Supreme Court, however, ruled this summer that ICWA didn't apply in this case, because Brown hadn't had custody of Veronica at birth.

Courts in South Carolina then demanded that Brown give Veronica back to the Capobiancos, which he refused to do for several weeks while appealing the decision in Oklahoma.

Meanwhile, in South Carolina, a coalition of Indian rights groups has dropped a federal lawsuit on Veronica's behalf.

The Native American Rights Fund and other groups were accusing South Carolina of violating Veronica's civil rights by taking her away from her tribe and biological family without a "best interest" hearing.

Officials wouldn't comment on why they dropped the lawsuit.

Flooding is latest bout with weather in Louisiana

Flooding is latest bout with weather in Louisiana

Why Would Airlines Weigh Passengers Before Flights?

Why Would Airlines Weigh Passengers Before Flights?

Overview: The fight for Baby Veronica went all the way to the Supreme Court. Dusten Brown was engaged to Christy Maldonado when she became …

After a bruising two-year custody battle that gained national attention, 4-year-old Veronica is back on James Island with her adoptive parents…

Dusten Brown, biological father of Baby Veronica announced in a statement that he would end his attempts to regain custody of Veronica

From left, Chrissi Nimmo the assistant attorney general for the Cherokee Nation and Dusten Brown announcing no more litigation in the Baby Veronica case Thursday in Tulsa. STEPHEN PINGRY/Tulsa World