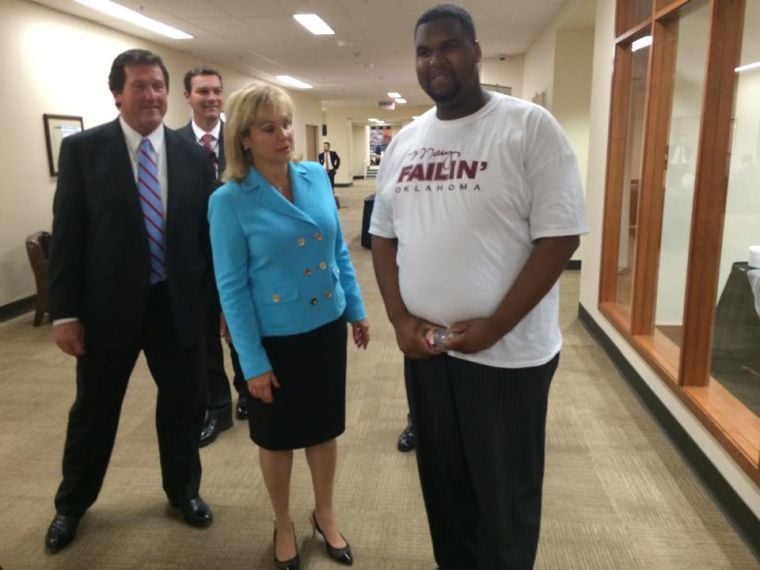 Gov. Mary Fallin reads OU student Rico T. Smith’s, T-shirt, which says ”Mary Failin’ Oklahoma” on the front and lists her perceived failures on the back. Fallin posed for a photo with Smith before noticing the writing. 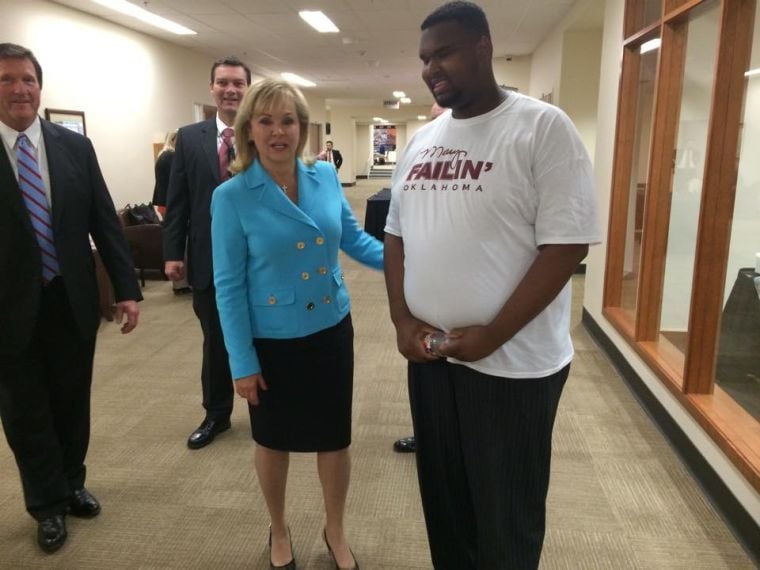 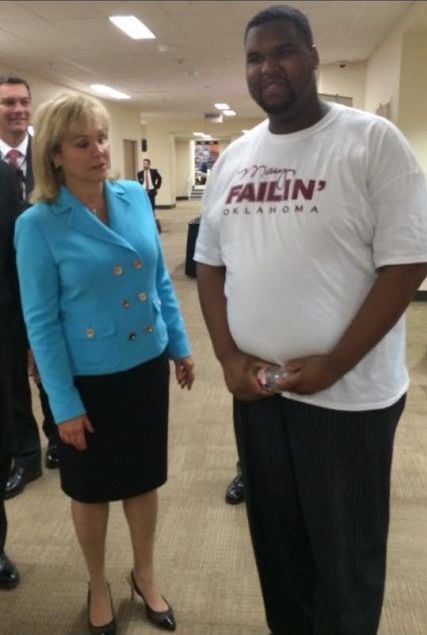 Gov. Mary Fallin thought she was stopping for a picture with a supporter after Thursday’s gubernatorial debate.

But closer inspection of Rico T. Smith’s T-shirt proved she was mistaken.

The University of Oklahoma student posted Facebook photos of his meeting with the governor and her reaction following Thursday night’s debate in Stillwater.

Smith, 22, who is studying political science, went to the debate to support Rep. Joe Dorman, D-Rush Springs. The Republican Fallin and Dorman face off in the Nov. 4 general election.

After the debate, Smith ran into Fallin and asked if a friend could take a picture of them together.

Fallin then read the shirt Smith was wearing, which read “Mary Failin’ Oklahoma” with a list of her perceived failures on the back.

His friend caught the governor’s somewhat deflated reaction in a second picture.

Both were posted side-by-side on Smith’s Facebook page, generating a lot of response, he said Friday.

According to Smith’s account of the meeting on his Facebook page, the governor looked at his shirt and said, “You’re being mean to me,” before being rushed away by her staff.

“I felt a little bit bad that it happened,” Smith said.

Smith said he has met Fallin several times prior to Thursday’s debate.

“I don’t have any personal vendetta against her,” he said. “I think it is a difference of political beliefs. I just don’t feel as if she has represented my interests as governor.”

A spokesman said Fallin was graciously interacting with someone she thought was a supporter.

“The governor stopped what she was doing, met with a complete stranger, shook his hand and took a picture because that is the kind of person she is,” said Alex Weintz, a Fallin spokesman. “She wants to meet her constituents. I thought for a Dorman volunteer to do what he did was petty and negative.”

Dorman’s campaign and Smith said he has not worked or volunteered for the Dorman campaign.

Smith, however, is selling the T-shirts for $20 apiece after creating them to raise money for a political action committee.

No shutdown for Florida amid virus concerns

'It's a crisis': COVID-19 hospitalizations soaring at record pace as virus spreads faster than ever in Oklahoma

In only a month, COVID hospitalizations have gone from lows similar to June 2020 after quarantine up to then what took four months to hit in October 2020 — when Trump's coronavirus task force advised Gov. Kevin Stitt that "many preventable deaths" were happening in Oklahoma.

Oklahoma's seven-day average of daily new cases has rocketed back up to mid-February rates. Nearly 10,000 confirmed cases are active across the state, with more than 2,400 in Tulsa County.

Gov. Mary Fallin reads OU student Rico T. Smith’s, T-shirt, which says ”Mary Failin’ Oklahoma” on the front and lists her perceived failures on the back. Fallin posed for a photo with Smith before noticing the writing.