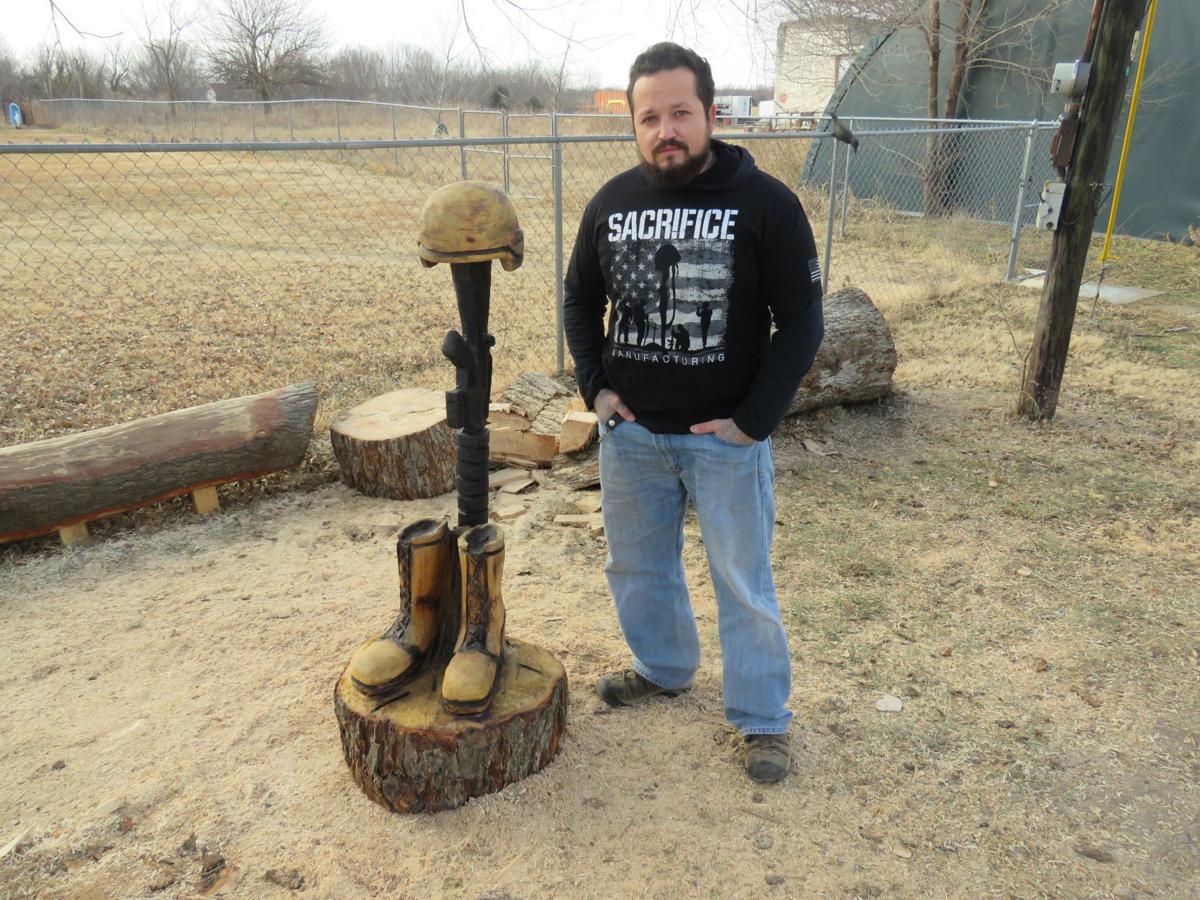 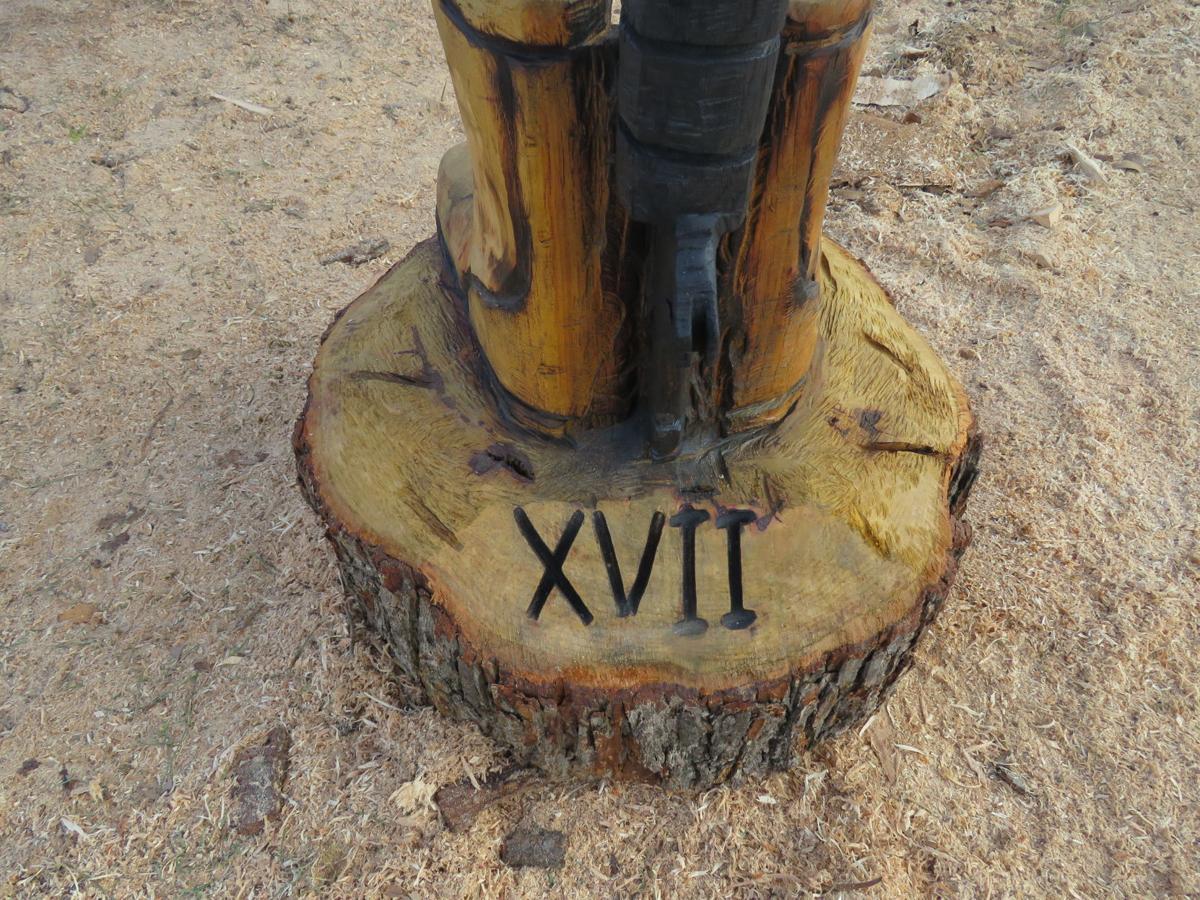 Local Afghanistan veteran Anthony Marquez creates the carvings from his backyard and garage, where he hauls in large pieces of tree trunk that he forms into a battlefield cross – a memorial consisting of a military helmet resting atop a machine gun anchored by combat boots. ART HADDAWAY/Owasso Reporter

To honor their service, Marquez made a promise to himself last summer to carve a memorial for each family that lost their son in Sangin.

“These carvings are very important to me,” Marquez said, “and my main goal is honoring those who sacrificed everything and ensuring the families that their loved ones are not forgotten.”

The dedicated veteran creates the carvings from his backyard and garage, where he hauls in large pieces of tree trunk that he forms into a battlefield cross – a memorial consisting of a military helmet resting atop a machine gun anchored by combat boots.

“I just have (a) cardboard stencil,” he said. “Other than that, I have a dummy rifle and a pair of boots and a helmet that I look off of. There’s no sketches, there’s no planning of it, you just start carving on it.”

Etched into the base of the wood is an “XVII,” signifying the 17 comrades Marquez lost in his battalion. He said he carves each sculpture – what he calls “XVII Carvings” – by hand with a chainsaw and takes around 16 hours over two to four days to complete the process.

“It has a lot of meaning to me,” he said. “I can put my full effort into it, because to me, it’s more than just a carving, it’s emotional … When I finish the boots and the rifle, you just step back and you just start crying because you remember everything.”

The dedicated veteran completed his first carving last July with the help of a mentor and presented it to the Gold Star Mother of Robert Grenigers at his grave at Fort Snelling in Minneapolis, Minn., on the fifth anniversary of his death.

Marquez also just completed his second carving for Sgt. Joshua Bouchard, a wounded veteran in Boston, Mass., whose house recently burned down. The sculpture will be auctioned off through the Boston Wounded Vet Run in February, with the proceeds going to help Bouchard.

Marquez said for each carving he does, he has a close conversation with those family members receiving it to learn more about the kind of person their son was. He said this helps him have a one-on-one connection with them while creating it.

“Each carving is for a different person lost,” he said. “I have them send me a picture of their loved one that memorial piece is for, that way when I sit down to do that carving, then it’s more personal to me, it’s not just another customer and gone.”

Since his first carving in July, Marquez has decided to start his own business after receiving several requests from friends and families to create a memorial for them or their loved ones. Interested parties can visit xviicarvings.com to learn more and place an order for a sculpture.

In April, Marquez will be traveling to Moxee, Wash., to donate his third carving to the family of Joe Jackson, who was the first in the 1st Battalion 5th Marines to be killed in action while in Sangin. There, he will pay tribute to Jackson’s service through a dedication ceremony.

Anthony Marquez joined the U.S. Marine Corps after high school and served five years active duty. He said his uncle, who was also in the Corps, played a large role in influencing his decision to join.

Marquez said the military has made him a better man: “I think it’s a good thing, it kind of shaped who I am, defined the path that I continue to go on and the way I live my life."

Steve and Betty Holleman have left a lasting legacy on their hometown community.

Owassons rally for LGBTQ pride in downtown district: ‘It’s not just me; I’m not alone’

On Monday, May 3, Tulsa County will begin repairing the bridge deck on the 56th St. N. Bridge over Bird Creek, just south of Owasso, which will take about four to six weeks.

Lana and Michael Evans, who live in Nottingham Estates, were recently recognized for their efforts in beautifying their landscape.

Lucas Condes from Collinsville has completed all coursework at the University of Oklahoma, never making less than an “A” in class.

Colby Lundquist of Owasso is among 93 students earning a DVM degree from Oklahoma State University’s College of Veterinary Medicine on May 7.

Detective Leila Rau with the Owasso Police Department earned NSU’s Crime Scene Investigation Certificate, which is accredited by the Council on Law Enforcement Education and Training.

Several individuals and organizations were honored at Owasso Chamber’s monthly luncheon on Wednesday.

Local Afghanistan veteran Anthony Marquez creates the carvings from his backyard and garage, where he hauls in large pieces of tree trunk that he forms into a battlefield cross – a memorial consisting of a military helmet resting atop a machine gun anchored by combat boots. ART HADDAWAY/Owasso Reporter