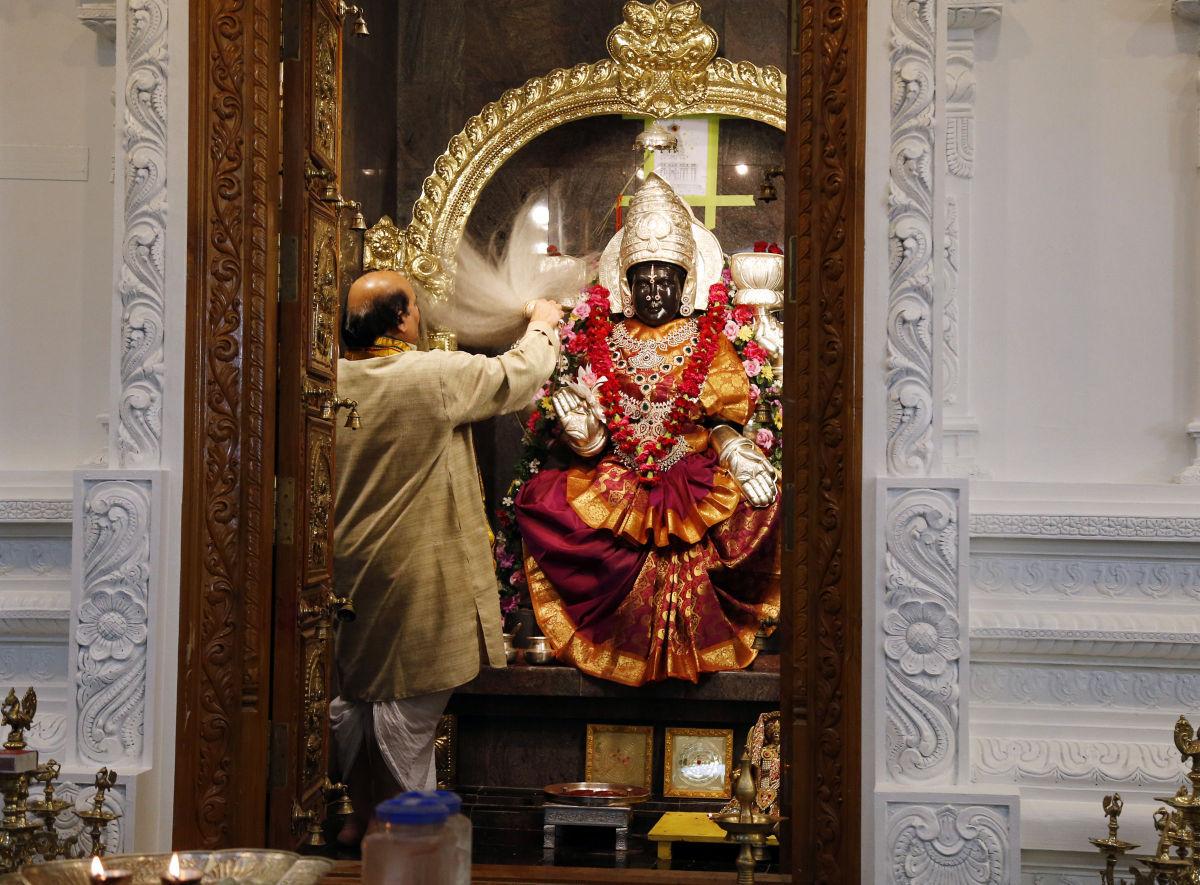 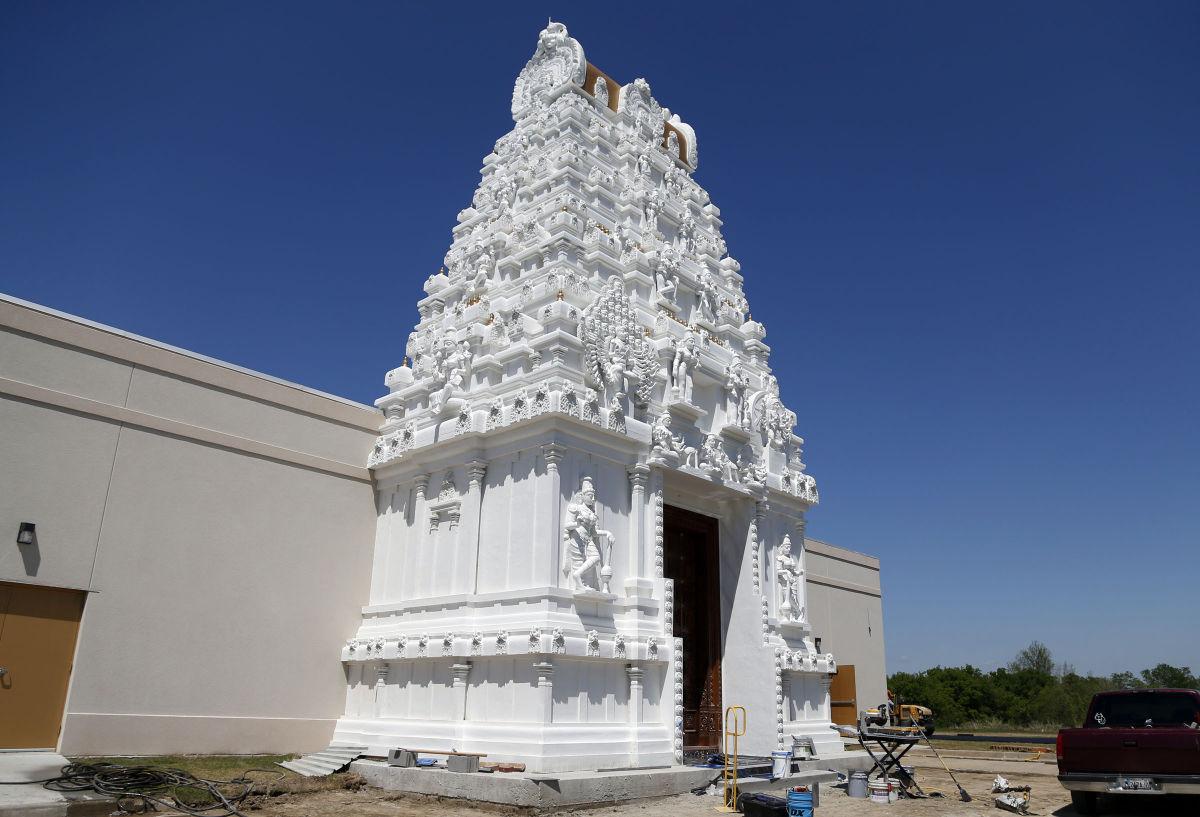 It took five artisans 13 months to construct the tower at the Hindu Temple of Greater Tulsa. STEPHEN PINGRY/Tulsa World 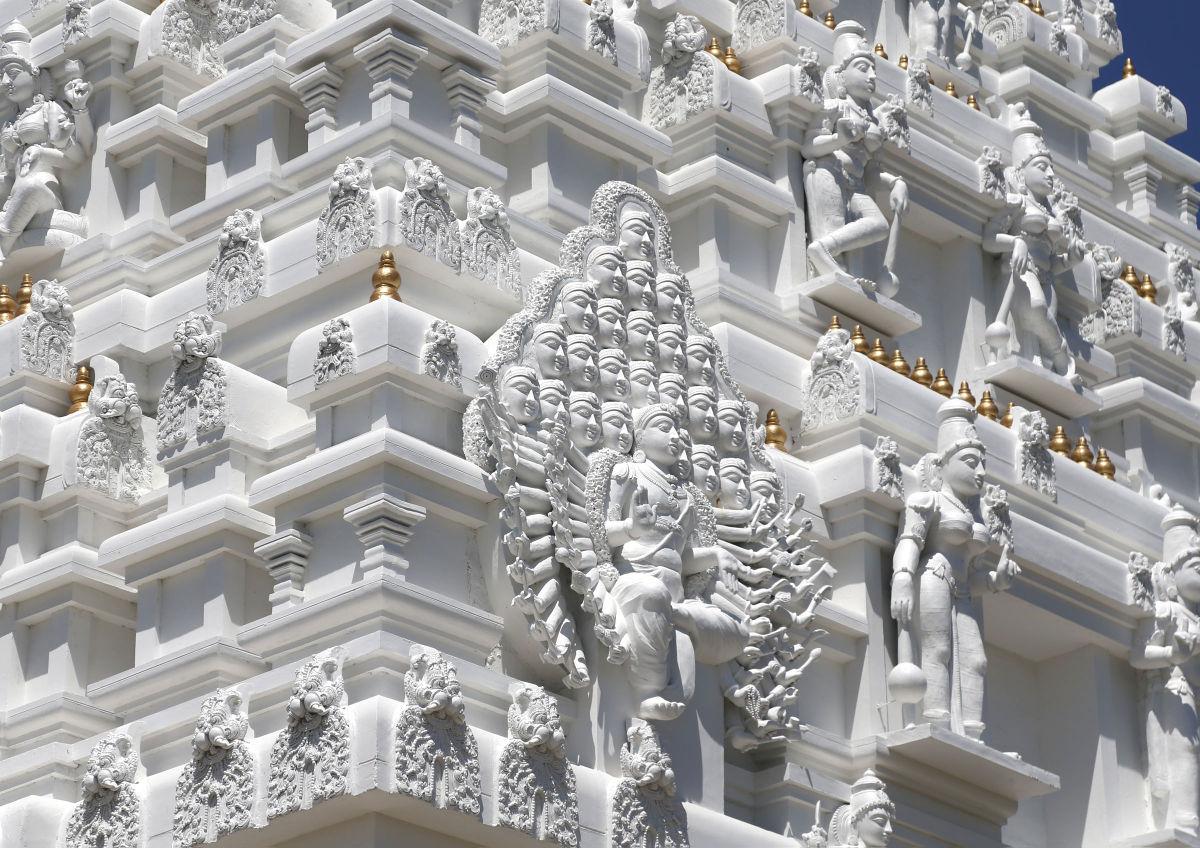 The deities that cover the surface of the tower at the Hindu Temple of Greater Tulsa were hand-made with clay and plaster by special craftsmen. STEPHEN PINGRY/ Tulsa World 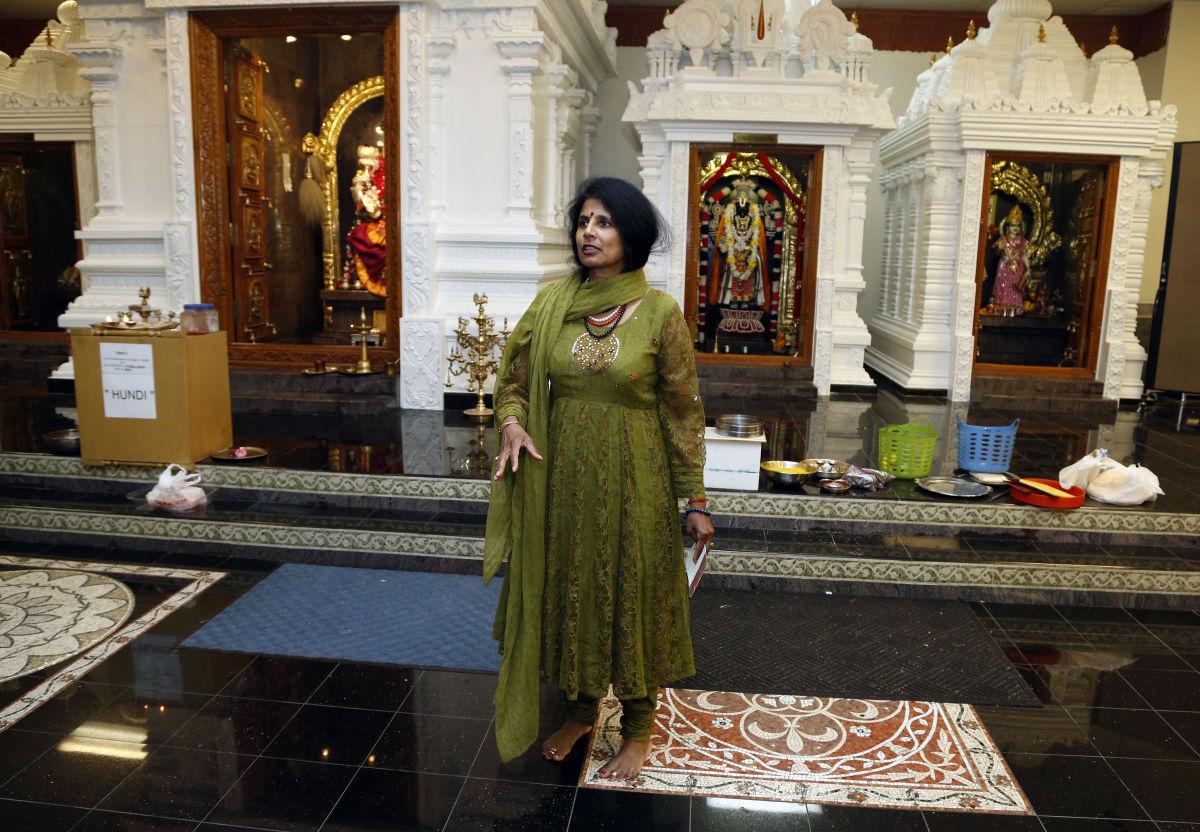 Sandhya Reddy, a trustee of the Hindu Temple of Greater Tulsa, talks about the temple’s deities. STEPHEN PINGRY/Tulsa World 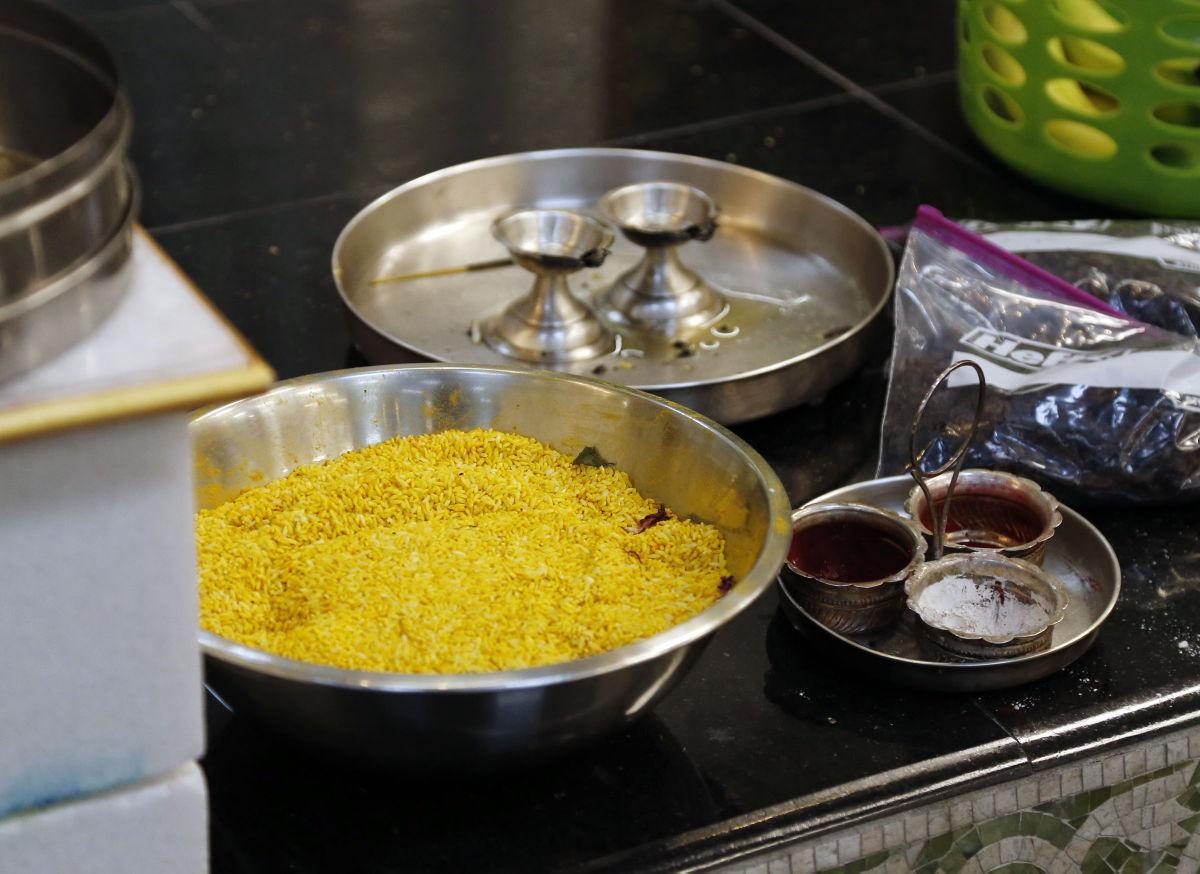 Priests offer food to the deities in the Hindu Temple of Greater Tulsa. STEPHEN PINGRY/Tulsa World 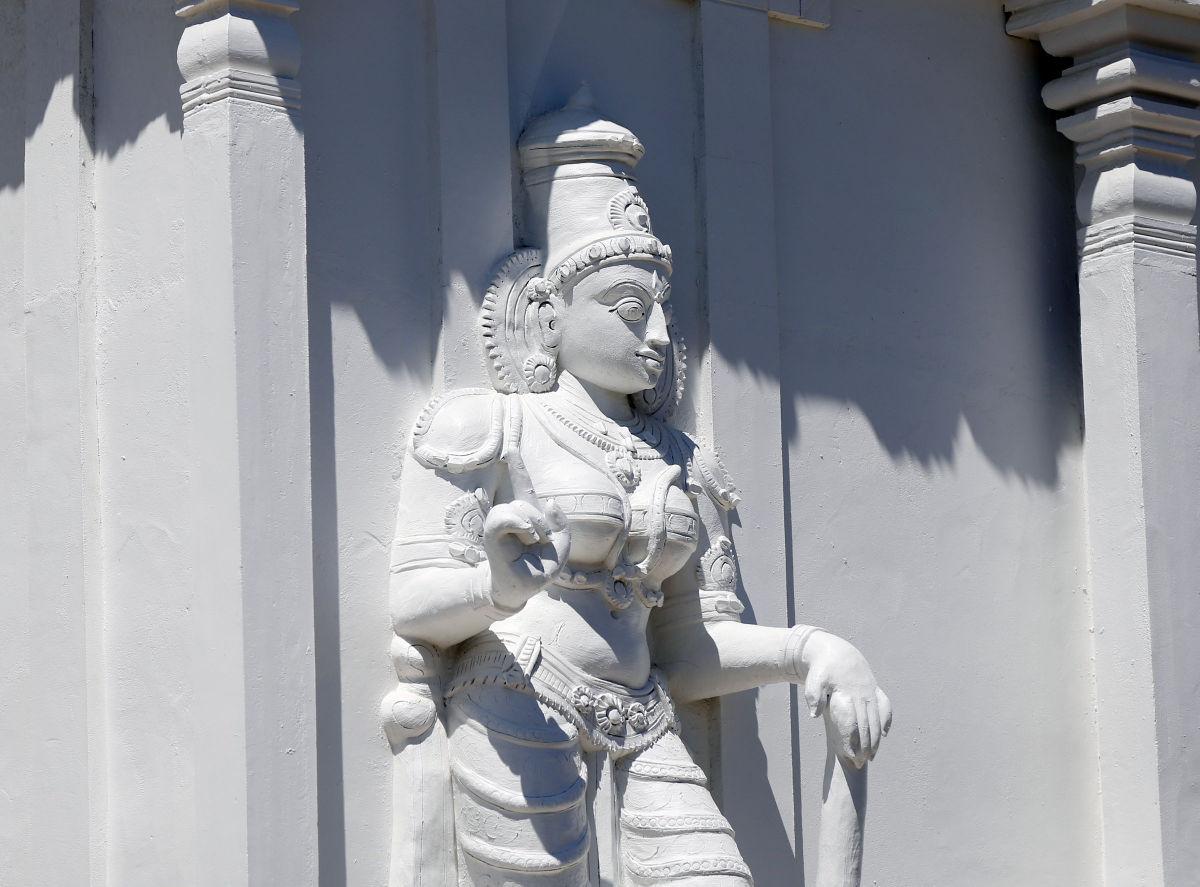 Artisans hand-made the deities on the tower at the Hindu Temple of Greater Tulsa. STEPHEN PINGRY/Tulsa World 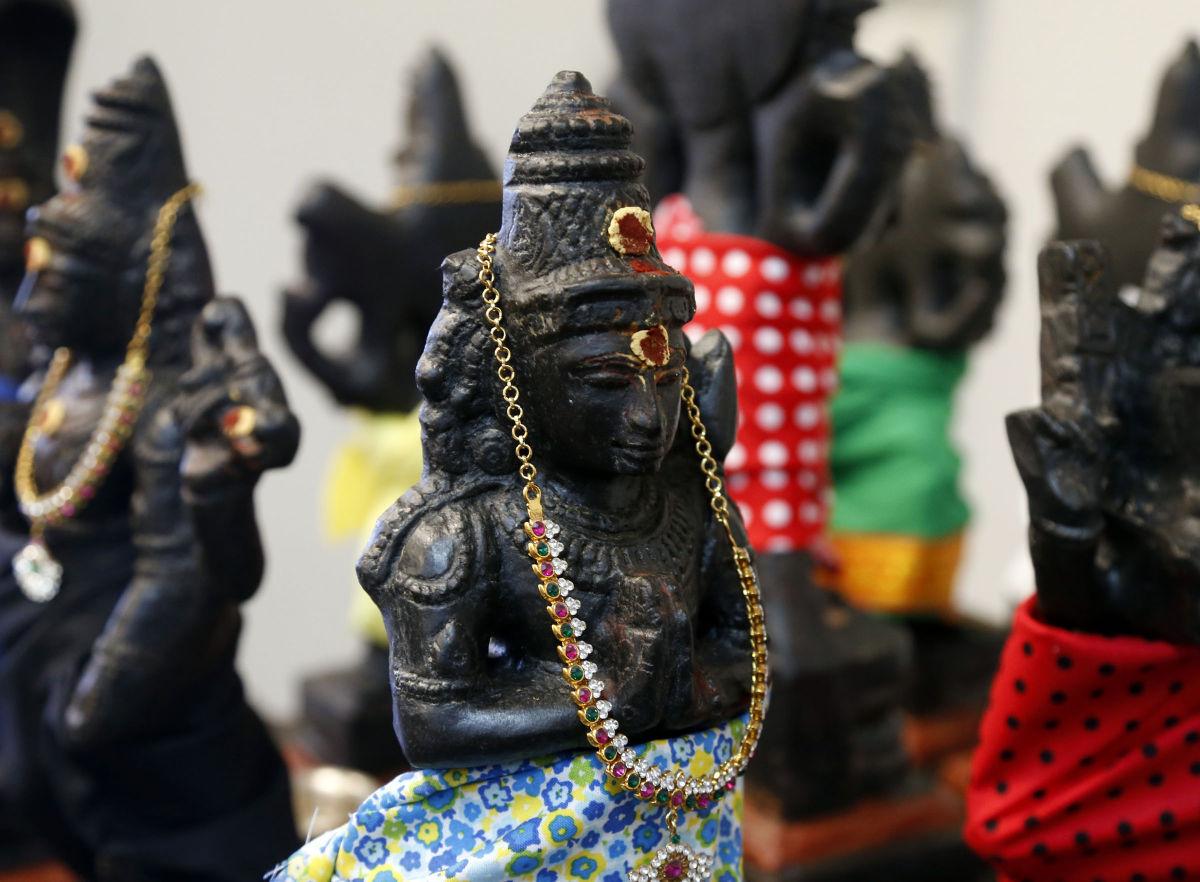 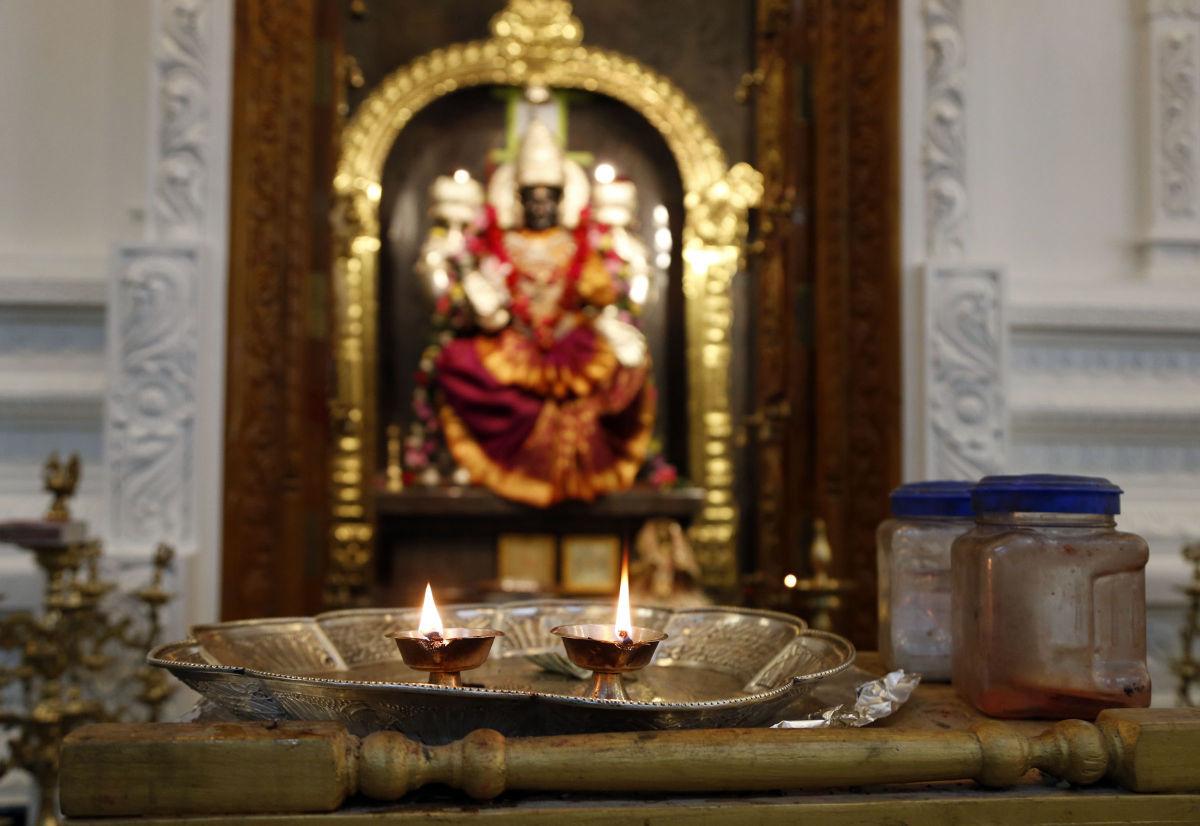 Area Hindus will participate in a rare event at the Hindu Temple of Greater Tulsa this week.

Eight Hindu priests from other states will join the two priests at the temple to perform more than 60 rituals over a four-day period leading up to the Maha Kumbhabhishekam ceremony on Sunday, a ritual to “energize” six new deities at the temple.

“It’s very important,” Sandhya Reddy, a trustee at the temple and chairman of its religious committee, said of the ritual performed only once every 10 to 12 years. “In the Hindu faith, we say in your lifetime, you’re blessed if you can attend one of these rituals. It’s a very blessed event.”

The celebration will include a formal opening of a $1.3 million expansion that doubles the size of the temple at 16943 E. 21st St., said Srini Sundaramoorthy, chairman of the board of trustees.

The expansion adds 2,700 square feet to the prayer hall, which will house the new deities in booths along the walls, and an ornate 50-foot tower with a 3,000-pound hand-carved teakwood door, creating a new grand entrance to the temple, he said.

Reddy said the climax of the observance is the Kumbhabhishekam ritual.

In that ritual, specially prepared water and grain in a brass pot on the top of the new tower is released to trickle down silver wires to the new idols, a process Hindus say imparts life and spiritual power to the idols.

“When that happens, it means that there is life now in these deities, they are not just stone idols anymore,” Reddy said. “These deities are with all the power and energy of the almighty.”

She said the ritual is not properly called a dedication because, “You’re not dedicating it to anybody or anything, right?”

From that time on, the priests will perform daily rituals before them and offer them food, Reddy said.

“It’s our way of being grateful for everything we are blessed with.

“All the deities were sculpted in India and shipped here. A few select people in India have the sanctity to sculpt the deities,” she said.

Among the new deities are Saraswati, goddess of knowledge and music. Indian parents take their children to the temple at the beginning of their education to get her blessing.

And Anjaneya, the monkey god, depicted with a red face because, according to Hindu legend, as a child he went up to play with the sun and burned his face.

Reddy said all of the deities have one leg down to denote that they are prepared to move quickly to help those who call on them.

The tower itself was made by five Indian artisans over a 13-month period. Temple architect Vanmeeganathan Sethuraman said the ornately fashioned deities that cover the surface of the tower were hand-made of clay and plaster. The tower is painted white and gold.

He said the door of the tower is 14 feet tall, 8 feet wide, and was hand-carved by an artist in India. Its carvings illustrate the nine incarnations of Lord Shiva, a major Hindu deity.

Kusum Master, president of the temple, said it is rare to have a Kumbhabhishekam observance in a U.S. city the size of Tulsa.

She said the Hindu community welcomes people of all faiths to come to the temple for the celebration.

About 500 Hindu families live in the Tulsa area, nearly all of them from India, she said. Oklahoma City also has a Hindu temple.

Hinduism, whose roots go back about 5,000 years, is the oldest religion in the world, Master said.

“Hinduism is a way of life. It’s not just a religion,” she said.

The public is invited to all parts of the observance, which begins at 9 a.m. Thursday. It includes events over the following four days, ending about 2 p.m. Sunday. For more information and the schedule, go to htgt.org.

Reddy said there is a growing interest in Hinduism in the United States.

“The essence of spirituality is not the faith that you follow,” she said. “Faith is like a stepping stone for our practices, for our teachings.

“But ultimately, spirituality is to make us a decent human being, and for us to recognize that there is a higher power — a higher energy, what we may call spirit, or God, or energy — to bow down to that power and recognize … that the meaning of human life is not just to come here and while away our time, but ultimately to become one with that supreme being.”

The name “hedge apple” comes from the fact that early settlers would plant Osage orange trees in rows to serve as a kind of fence between the vegetable garden and their livestock.

Pros and cons of real vs. fake Christmas trees

Body spray recall: What the finding of a cancer-causing chemical means for you

Benzene, a known cancer-causing chemical, was found in over half of 108 batches of antiperspirant and deodorant body sprays from 30 different brands, according to a petition filed with the FDA.

Whaling has designed an annual ornament for the city, each year focusing on a different local landmark or place of cultural significance — Gilcrease Museum, Cain’s Ballroom and Guthrie Green, to name a few.

Flowerless for the first 10 months of each year, it attracts little attention. But when the Thanksgiving/Christmas holidays arrive, something truly magical occurs.

Carols and Crumpets will be held Saturday Dec. 4 after last year’s pause.

Animal Doctor: End the keeping of animals in schools

Dear Dr. Fox: I read with interest your article on fish cruelty, and it brought to mind our experiences with fish in the Florida Keys.

In natural world (as compared to the micro-environments we call our yards), when leaves fall from the trees, they accomplish several things.

I'm looking forward to selecting my Christmas tree this year. How can I know which tree is best and how do I keep it looking its best until Christmas? — W.B.

Why are barns painted red?

Barns are practical buildings, designed to safeguard farm animals and equipment. Why are so many painted to stand out from the landscape?

It took five artisans 13 months to construct the tower at the Hindu Temple of Greater Tulsa. STEPHEN PINGRY/Tulsa World

The deities that cover the surface of the tower at the Hindu Temple of Greater Tulsa were hand-made with clay and plaster by special craftsmen. STEPHEN PINGRY/ Tulsa World

Sandhya Reddy, a trustee of the Hindu Temple of Greater Tulsa, talks about the temple’s deities. STEPHEN PINGRY/Tulsa World

Priests offer food to the deities in the Hindu Temple of Greater Tulsa. STEPHEN PINGRY/Tulsa World

Artisans hand-made the deities on the tower at the Hindu Temple of Greater Tulsa. STEPHEN PINGRY/Tulsa World