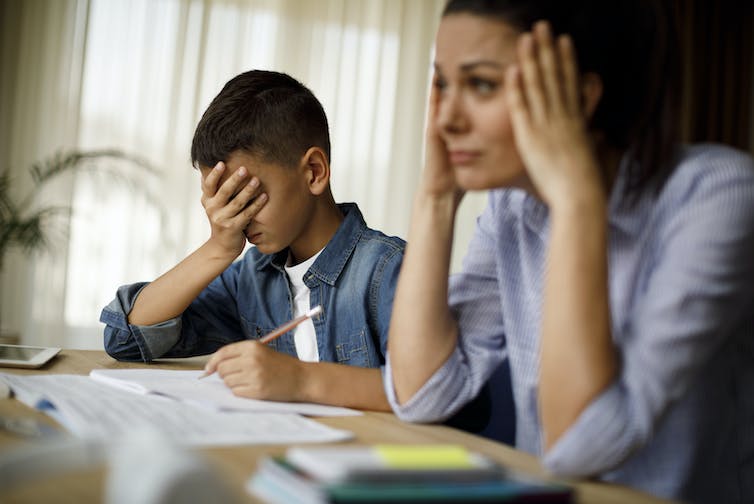 Many parents have had to play the role of a substitute math teacher during the pandemic. damircudic/E+ via Getty Images

In his March 2021 Netflix special, comedian Nate Bargatze complains about having to teach his kids a confusing “new math” based on standards known as the Common Core.

“The goal of Common Core is to use one sheet of paper for every problem,” Bargatze jokes. He observes that this new math requires people to “keep breaking the problem down.”

“You put the problem at the top, and it just keeps going,” Bargatze says. “And then what’s funnier is you see old math in the middle of it. As you break it down, old math gets in there and you’re like, ‘Oh, just do that at the top.’ I don’t even know what we’re doing.”

Bargatze is by no means alone in his frustration. Since many schools went largely remote during the COVID-19 pandemic, countless parents, me included, are becoming burnt out as we find ourselves thrust into the role of substitute math teacher.

Why does this so-called new math – which has actually been around for over a decade – draw so much scorn from parents?

This new math is based on a list of standards that students should master within each grade. It’s different from “old math” in that the standards focus not only on the step-by-step procedures to solve math problems, but also on why those procedures work in the first place. The idea is to teach the procedures in such a way that children can apply this knowledge to future math problems that they encounter – both at school and in real-life contexts.

For instance, in solving the multiplication problem, 312 x 23, parents historically might line the problem up and start multiplying from right to left. We were told that we had to include the 0 on the right under 936, but I don’t recall ever being told why. But under the Common Core standards, students are encouraged to break the problem down into hundreds, tens and ones. This newfangled way to do the math makes it more transparent where the answer, 7,176, and that mystery 0 come from.

As Bergatze’s stand-up bit points out, this new math has triggered some parents’ “math anxiety” – a common apprehension that can impair math performance, many studies show.

Researchers haven’t completely figured out how to eliminate math anxiety. But as a researcher who studies why people hate math, I believe there are steps parents can take to combat any negative attitudes they may have toward math and to improve children’s math understanding. Five of those steps are listed below.

1. Point out math in everyday life

Math learning doesn’t happen just in classrooms. Parents can draw children’s attention to math all around them. They can talk about math in the grocery store or at the bus stop. One idea is to incorporate positive math talk while reading books with our children, even if the books don’t inherently include numbers. For example, even though the classic children’s book “The Very Hungry Caterpillar” doesn’t include counting or comparing how much the caterpillar eats each day, parents can insert guiding scenarios like “The very hungry caterpillar ate 4 strawberries. Let’s count them. 1-2-3-4. Did the caterpillar eat more plums or strawberries?” This is a “two-for-one deal” that could help time-strapped parents promote literacy and numeracy. 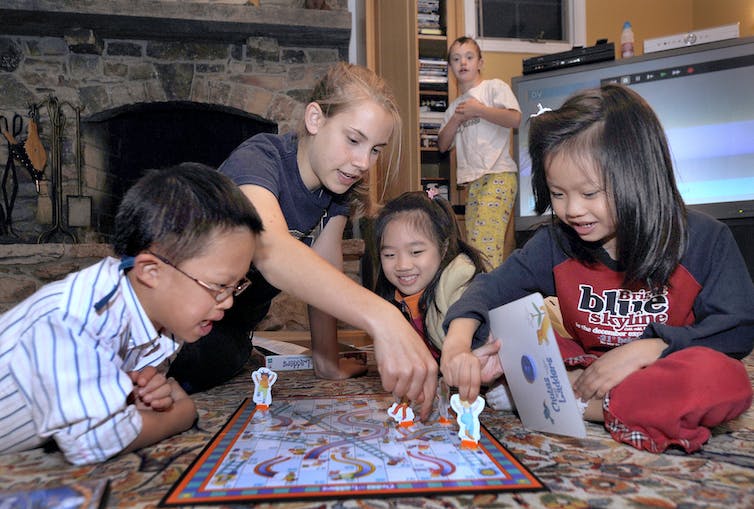 2. Play board games and card games

Children can learn about math as they play fun board games, such as Chutes and Ladders, and card games, like war. Research has shown that playing board games pays off. One study found that while low-income families played board games less at home than middle-income families, even one hour of board-game play across a period of two weeks increased low-income children’s math performance to the level of their middle-income peers.

3. Break math down step by step

To help kids avoid the COVID slide, a major dip in math performance occurring during the pandemic, parents can break down math problems step by step. As they learn the procedure at each step children can then better understand how to get to the correct answer, or where they made a mistake along the way.

Parents can also help children understand more difficult math concepts, such as fractions, by drawing connections to more familiar, well-liked and less anxiety-provoking math, such as whole numbers or percentages. For instance, parents can show that ¾ – that is, three-fourths – is the same as 75 out of 100, or 75%. Parents can draw a connection to money, too. There are four quarters in a dollar. Each quarter is worth 25 cents. That means that three out of four quarters is worth 75 cents.

This recommendation goes hand in hand with our first recommendation. Parents should seek out opportunities to talk about math at every chance they get, but they should avoid negative math talk. Many an American will freely admit to being “not a math person”. These off-the-cuff remarks can have serious consequences for children, who soak up information in their environments.

Math-anxious teachers and parents can transmit their anxiety to children, especially girls. Girls and women have higher math anxiety, which could be one reason they have lower math performance and less confidence when estimating numbers and are less likely than men to pursue STEM careers.

I hope parents embrace their new role as math tutors, because it seems as if home schooling will continue throughout the spring for many students. It shouldn’t go unmentioned that kids aren’t all that enamored with their home-school teachers either. Some may even hope they won’t have the same teacher next year.

#39. The College of New Jersey

#20. University of Illinois at Urbana-Champaign

[Expertise in your inbox. Sign up for The Conversation’s newsletter and get expert takes on today’s news, every day.]

Clarissa A. Thompson receives funding from the U.S. Department of Education (Institute of Education Sciences).

Charles J. Fitzsimmons, Daniel A. Scheibe, and Lauren K. Schiller do not work for, consult, own shares in or receive funding from any company or organization that would benefit from this article, and have disclosed no relevant affiliations beyond their academic appointment.

Historic brewery is making a case for reusable beer bottles

How to prevent obesity in senior dogs

How to prevent obesity in senior dogs

Has the world's best coffee bean been found?

Has the world's best coffee bean been found?

Parenting is hard, let us help make it fun!

Sign up to get parenting advice, kid-friendly activities and more delivered to your inbox every week.

How to find the best tablet for your toddler

To help you find the right tablet for your toddler, here's what to consider when shopping, including a recommendation on three tablets to try.

In the wake of a rash of bills aimed at curbing the rights of transgender kids — specifically in youth sports — the American Academy of Pediatrics released a statement recently affirming its commitment to protecting the health and well-being of LGBTQ young people and condemning legislation that does the opposite.

Each of Nora Sandigo's six phones has a different ringtone, so she can keep track of which one is buzzing.