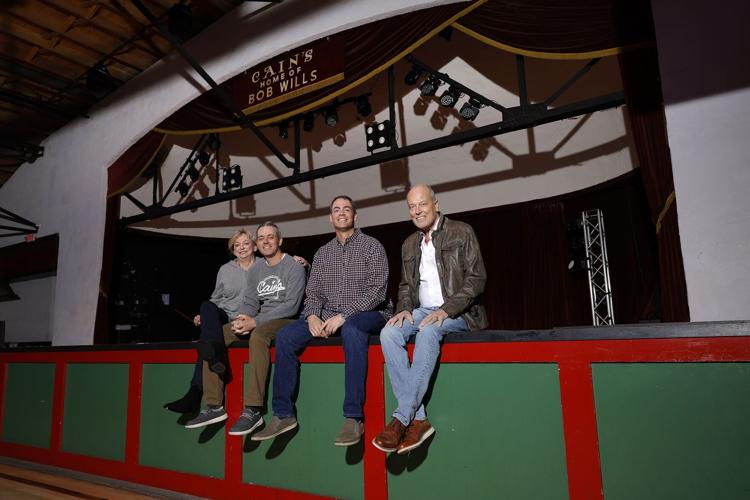 Cain's Ballroom has been owned for 20 years by the Rodgers family. Alice, Hunter, Chad and Jim were photographed in October at the historic venue. 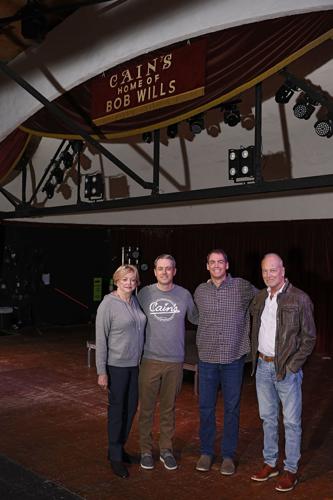 The Rodgers family (Alice, Hunter, Chad and Jim) posed for a photo at Cain's Ballroom in October. 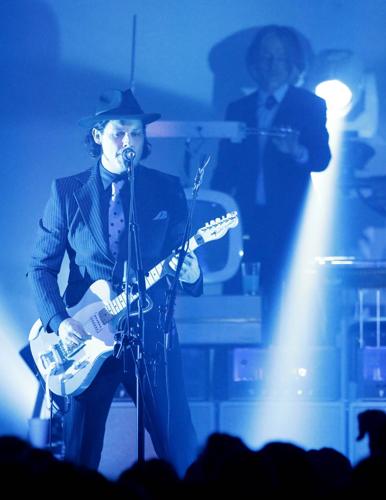 Cain’s Ballroom is a unique-to-Tulsa treasure.

For the past 20 years, members of the Rodgers family have been caretakers of the historic music venue.

Job well done: The Rodgers family was selected by Tulsa World Magazine among Tulsans of the year.

“I think I was the only one of the family who had been inside Cain’s Ballroom prior to us buying it, but I wasn’t familiar with the history and significance of the venue,” Chad Rodgers said.

“It’s an honor to own and manage one of Tulsa’s iconic venues,” brother Hunter said. “We have a great day-to-day team that helps keep the music alive.”

Alice Rodgers, going back to when the family acquired the property, said they happened upon a run-down building (“we walked in and it was like it had been deserted and was going to fall down”) that “used to be” a music venue. She said the boys turned “used to be” into “now and wow!”

“I am most proud of how Chad and Hunter, who were 25 and 21 with no experience, took on this project and resurrected and brought back to life this venerable music venue to world prominence,” Alice said of her sons.

“After seeing the venue for sale on a Sunday local newscast, walking through it on the following Tuesday and buying it on that Thursday, the whole purchase was a whirlwind,” Chad recalled.

“It was very daunting, as the first show we did, we lost like $25,000 as the show didn’t sell, and it really opened my eyes into how hard this endeavor might be, and was. Promoting shows is not for the faint of heart. There’s a ton of risk with every show, and it’s a very hard business.”

Cain’s Ballroom closed for four months in 2003 for what the Tulsa World reported as a million dollar refurbishment that included upgraded restroom facilities, climate control and other improvements that helped extend the life of the iconic facility.

There were lots of surprises and unpredictable costs, said Jim Rodgers, father of Chad and Hunter. But he called it a labor of love to fix up Cain’s Ballroom and keep it polished. He said there was lots of on-the-job-learning — and the family tried to avoid repeating the same mistakes while keeping Cain’s rolling over the past 20 years.

Hunter said he had never been to Cain’s and knew little about it before his family bought the venue that has hosted music artists ranging from Bob Wills to the Sex Pistols.

“I was living in Florida at the time, and I remember my mom calling and saying ‘We bought Cain’s.’ I came back for Christmas in 2002 and stepped foot in it for the first time. I was graduating in the summer of 2003 and, when I came home, I just basically started working with Chad. I just assumed this was what I was going to do for the next few years. I am shocked to think it’s been as long as it has. What a trip!”

Hunter said he is proud that Cain’s is still an independent venue and it makes him proud to hear music artists say it’s their favorite venue. In October, Marcus Mumford told a sold-out crowd that it is an honor to play Cain’s.

Members of the Rodgers family used words liked “shocked,” “humbled” and “proud” upon learning of the Tulsans of the Year honor.

“We know there are many amazing people and organizations that do so much for the Tulsa community,” Chad said. “It’s amazing to be included among them.”

Said Hunter: “We just provide people with a venue to create memories.”

The Rodgers family has owned Cain’s Ballroom for 20 years. Among questions pitched to members of the family: Got a favorite live show or backstage moment during those 20 years?

Alice: “Too many to count. Jack White for three sold-out shows. A Brooks & Dunn video shoot. Loretta Lynn. Robert Plant. Todd Rundgren. Chris Stapleton. We book so many artists who are on the cusp or have just hit it.”

Hunter: “There are too many moments to narrow down, but a few that stand out are the recent reunion of Turnpike Troubadours, The Strokes, meeting Buckethead, multiple Jack White shows, Green Day. ... The list goes on and on.”

Chad: “There are so many amazing moments that we’ve been a part of over the last 20 years. It’s hard to narrow it down. One that will always stick out to me, was when the L.A. Times named the Cain’s Ballroom in their top 12 places to see live music in America. It was amazing to know that people all over America and the world see what we feel everyday. There’s not a better place in the world to see live music than at the Cain’s Ballroom.”

Cain's Ballroom has been owned for 20 years by the Rodgers family. Alice, Hunter, Chad and Jim were photographed in October at the historic venue.

The Rodgers family (Alice, Hunter, Chad and Jim) posed for a photo at Cain's Ballroom in October.