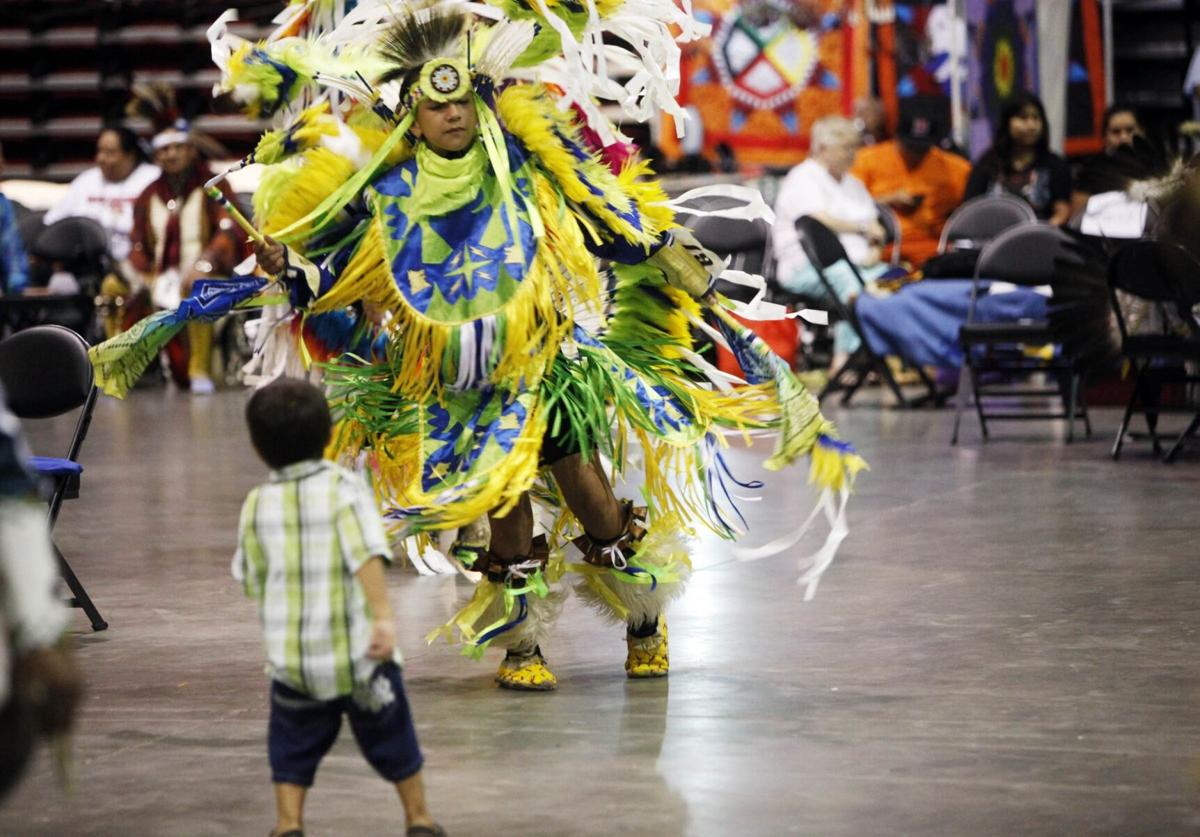 A young dancer mimics Pawnee tribal dancer Justin Townsend at a previous Tulsa Powwow. A 2021 date has not been announced for this event. 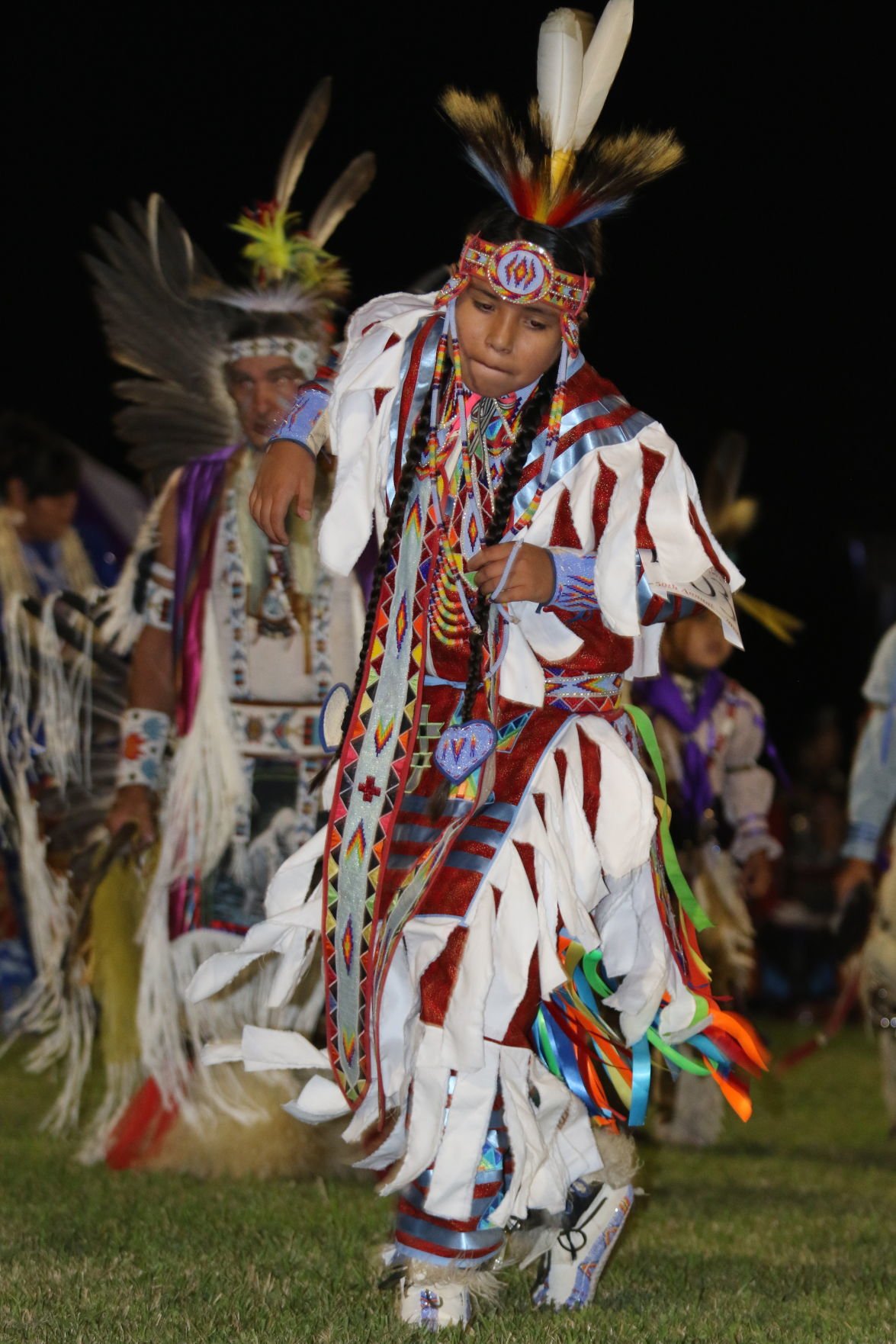 A young dancer performs at a previous event hosted by Skiatook’s Kihekeh Steh Club. A decision has not been announced about the 2021 status for this annual powwow. 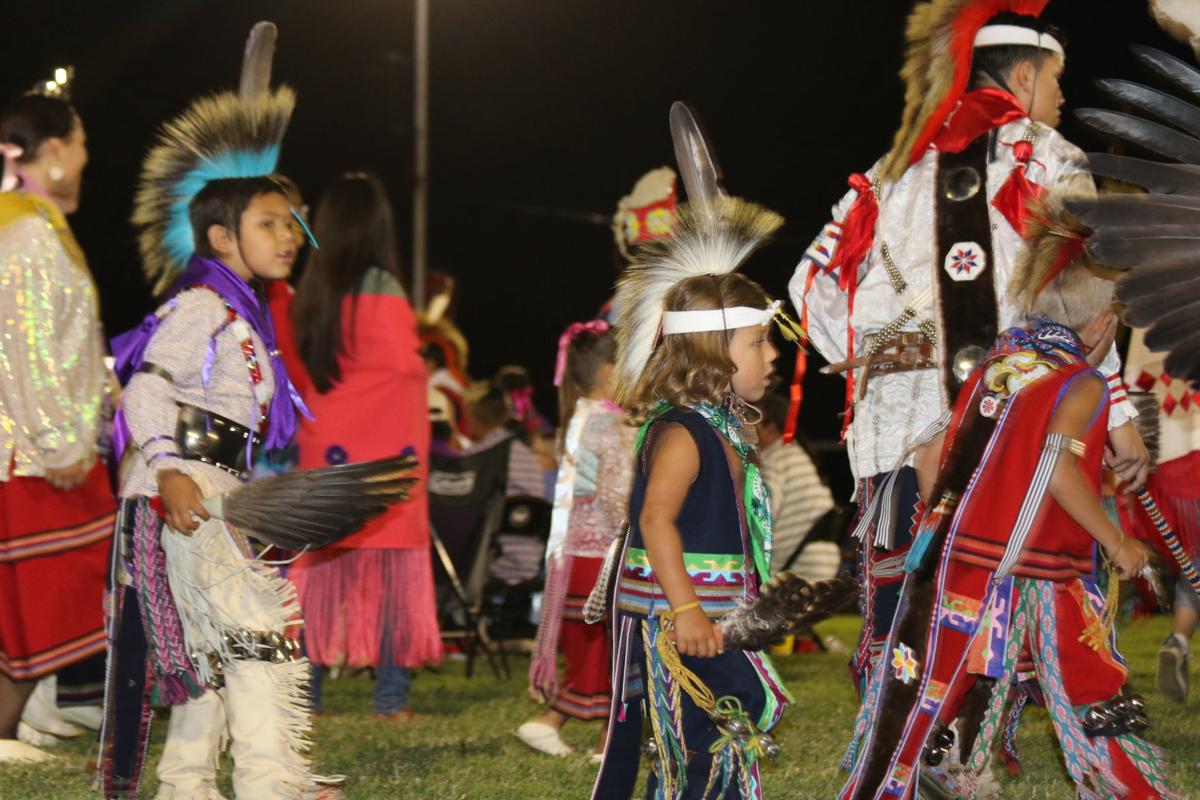 Dancers perform at a previous event hosted by Skiatook’s Kihekeh Steh Club. A decision has not been announced about the 2021 status for this annual powwow.

Living in Native America is a regular feature of Tulsa World Magazine and features the events and culture of local tribes.

RED ROCK — After an extra year apart, Donnie Childs is ready to welcome people back into the arena this July.

Childs is the chairman of the Otoe-Missouria Tribe’s Encampment Committee, which plans the north-central Oklahoma tribe’s four-day gathering off U.S. 177 between Stillwater and Ponca City.

Dating to 1881, the annual encampment has expanded beyond Otoe-Missouria tribal members and their families to include vendors and visitors from across the country. The 2020 edition was initially postponed because of COVID-19 and then eventually canceled.

“Last year was a tough year for our tribal community here,” Childs said. “We lost quite a few tribal members and community members. When it came to make the decision to cancel, it was very tough for the committee because it is the one time a year when the majority of our tribe is able to come together and enjoy each other’s company.”

Scheduled for July 15-18, this year’s encampment will include gourd dancing and categories often found at contest powwows, such as tiny tots, women’s jingle and men’s fancy dancing.

However, there won’t be any contests at the 2021 gathering.

“We’re bringing people back together after an extended absence,” Childs said. “The best thing will be just to sing together, dance together, be together and reconnect rather than worry about prizes.”

Recent data from the federal Centers for Disease Control and Prevention indicate that American Indians and Alaska Natives nationwide are getting COVID-19 vaccines at higher rates than their non-Indigenous neighbors. However, the disproportionate number of pandemic-related cases and deaths among Indigenous communities has played a factor in the Otoe-Missouria Encampment Committee’s plans for the 2021 gathering.

Along with the usual cooling stations needed for an extended outdoor event in July, this year’s event will include additional access to hand sanitizer and personal protective equipment for attendees.

To facilitate social distancing, the committee is limiting how many vendors will be allowed to set up during the event.

Also under consideration is setting up a vaccination pod at the event. Attendees will not be asked to show proof of vaccination, but Childs, who is also the tribe’s health director, said they are actively asking people who are even considering coming to get vaccinated ahead of time.

“We’re taking every precaution to bring everyone back and be safe at our event, then send them home safely,” he said. “We’ve got more than 3,300 tribal members from all 50 states. We want to make sure that everyone is safe and will be trying to follow all the guidelines to make sure they’re able to come back with us next year.”

Although the Otoe-Missouria Encampment is back on this year, not all events on the powwow and dance circuit are fully back in person yet.

In May, the Cherokee Nation announced plans to limit in-person attendance at the outdoor intertribal powwow scheduled for Labor Day weekend as part of its National Holiday.

The Muscogee Nation’s annual festival, traditionally scheduled for June, will be Sept. 23-26. However, the date confirmation announcement from the Okmulgee-based tribe did not mention which events will still be held, including its traditional stomp dance.

Meanwhile, the Stroud-based Sac and Fox Nation, which traditionally hosts its annual powwow in July, decided in April to cancel the event for a second consecutive year.

As of mid-May, no decision had been announced about the 2021 status for powwows hosted by the Tulsa Indian Club, Inter-tribal Indian Club of Tulsa or Skiatook’s Kihekeh Steh Club. All three events were canceled in 2020 because of COVID-19.

For at least one area Kiowa singer and drummer, the continued lack of large in-person events in the area is understandable.

Hyde Toppah’s spring and summer calendar is usually pretty full with dances and powwows. In April, he performed for the first time in a year at a virtual powwow held in conjunction with Northeastern State University’s Symposium on the American Indian.

However, so far this year, he has not received many inquiries. A COVID-19 survivor whose sense of smell still has not fully returned, Toppah lost 20 family members to the pandemic, including both of his in-laws within the span of a month.

“We don’t need the big crowds yet,” he said. “I would like to, but we’re not ready for it yet. It would be nice to see every single person out there, shaking hands and hugging, but I am just not ready for that yet.”

How to prepare your home for cooler weather

At Home: Make the most of your fall mums

Colorful chrysanthemum plants seemingly bursting with blooms are hard to resist in the fall.

Part of a thriving downtown described as sleepy only a couple of decades ago, the Rose District in Broken Arrow is consistently buzzing with activity.

Quench your thirst for knowledge and stretch your legs at the same time with a themed tour.

A young dancer mimics Pawnee tribal dancer Justin Townsend at a previous Tulsa Powwow. A 2021 date has not been announced for this event. 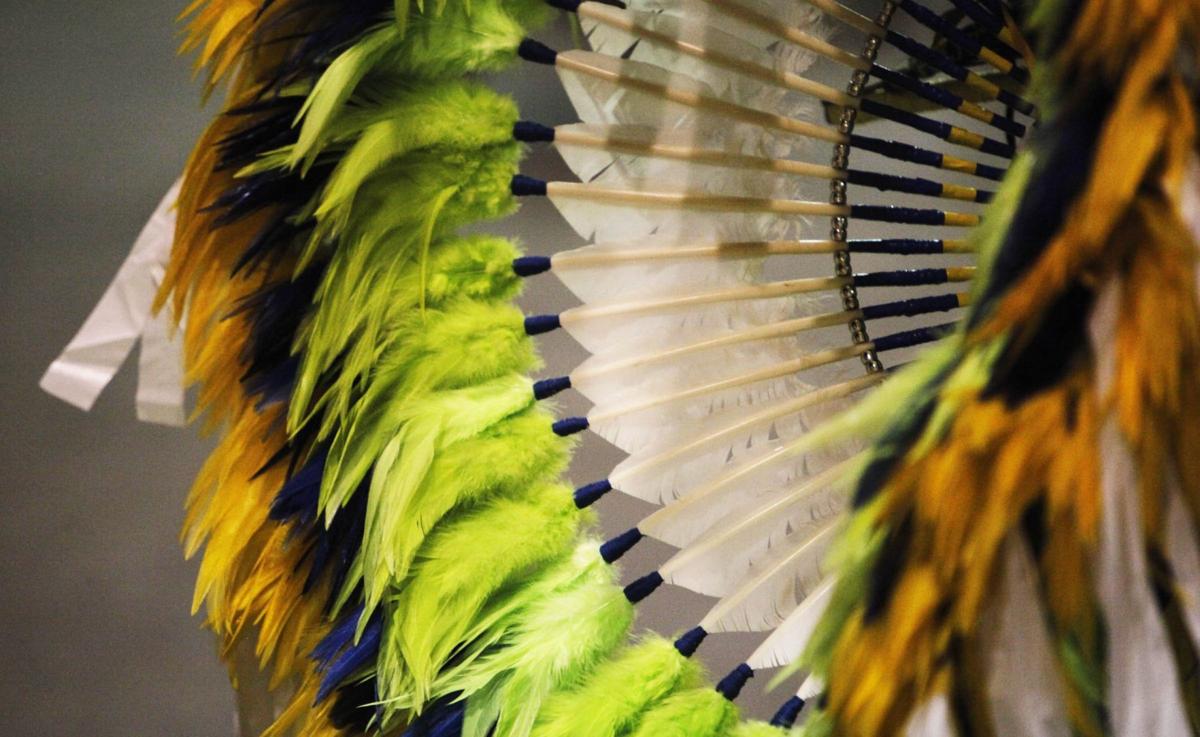 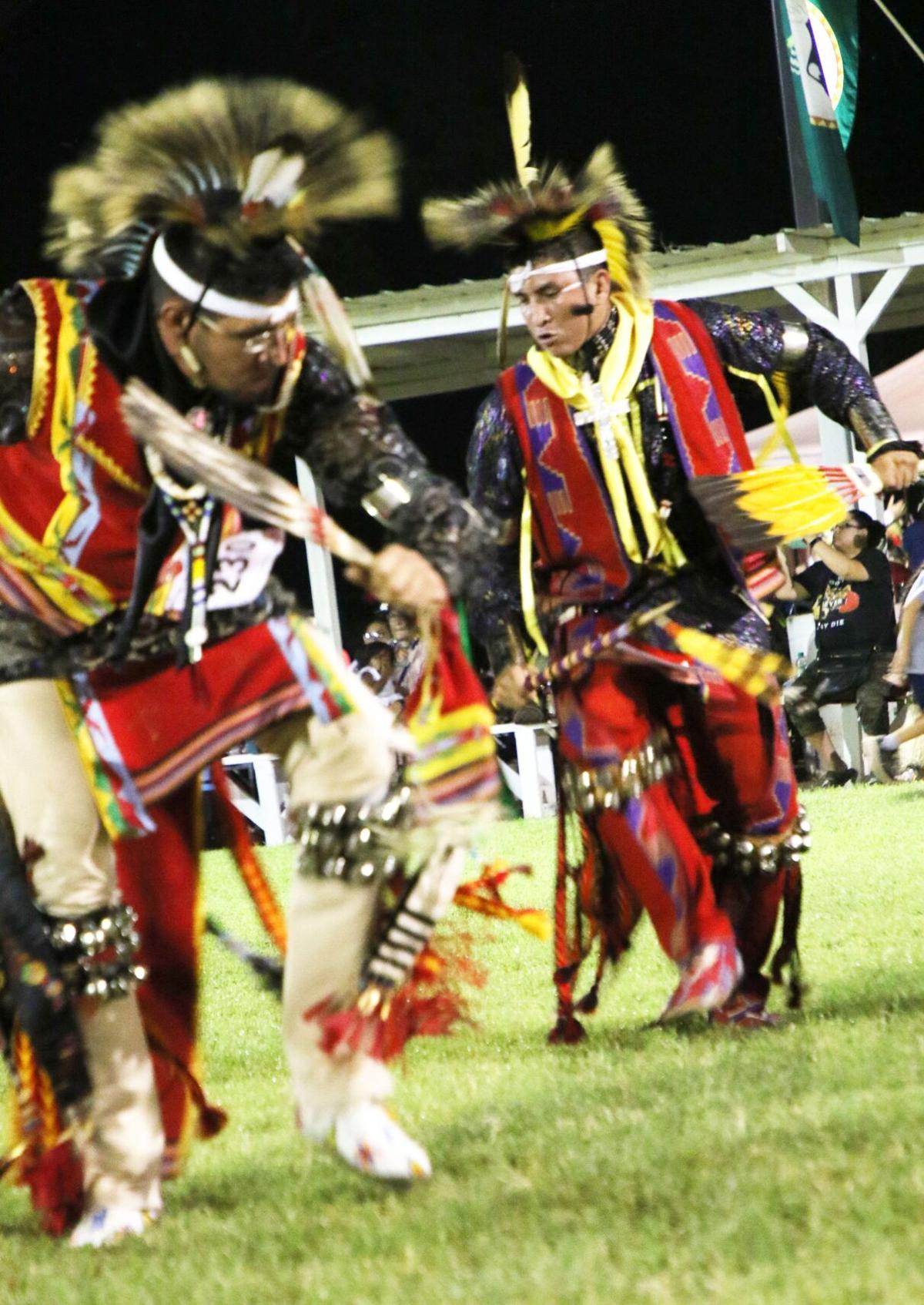 Although the Otoe-Missouria Encampment is back on this year, not all events on the powwow and gourd-dance circuit are fully back in person yet.

A young dancer performs at a previous event hosted by Skiatook’s Kihekeh Steh Club. A decision has not been announced about the 2021 status for this annual powwow.

Dancers perform at a previous event hosted by Skiatook’s Kihekeh Steh Club. A decision has not been announced about the 2021 status for this annual powwow.