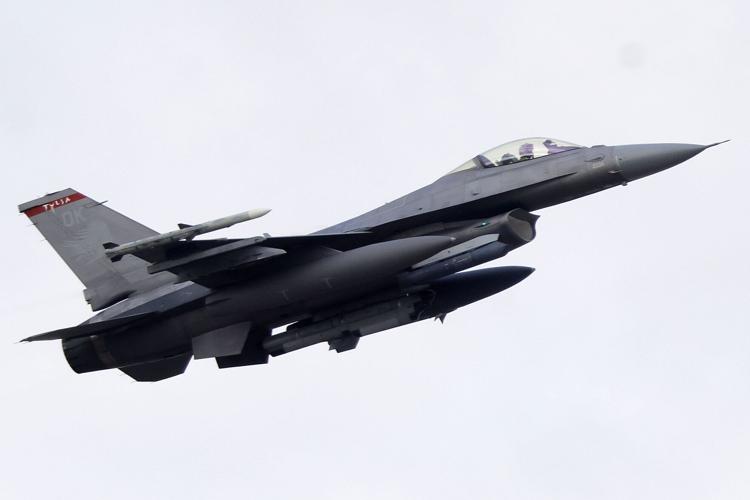 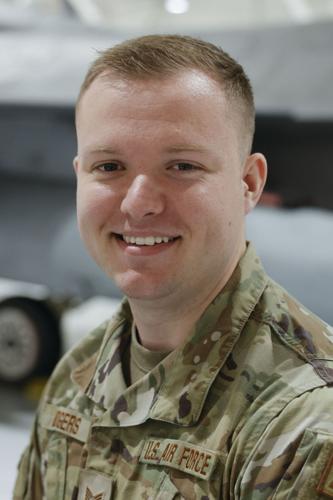 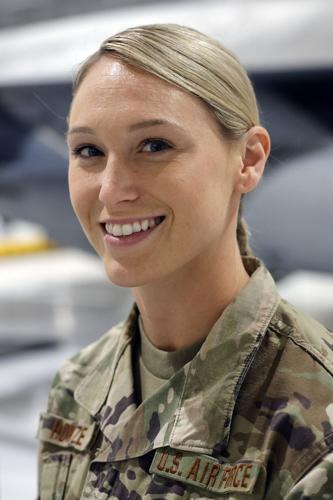 The steady, powerful whine of the Pratt & Whitney F100-PW-229 jet engines has a decibel level that requires earplugs.

From roughly 50 yards away, the sound is like a million teapots with boiling water steaming, right before they whistle — Shhhhhhhhhh ...

The planes are lined up, side by side, engines flowing, outside indicator lights flashing, flaps moving up and down, and mirror-like targeting system appendages rotating, then stopping, underneath the pilot canopies.

Systems are checked and rechecked for several adrenaline-pumping minutes.

Then the planes move forward and turn, one by one, and roll down the taxiway.

The whine gradually subsides as the jets move to the edge of the runway and out of hearing range.

Then comes the thunderous, streaking, high-pitched roar — a sound that trails each jet as it takes off with more than 29,000 pounds of thrust — pushing the pilot into the seat with five to six times normal gravity into a near-vertical climb at a dizzying speed.

“It’s a huge rush, every time you go out flying,” said Capt. Mike Hondo, 26, one of about 40 pilots in the unit, based on the north side of Tulsa International Airport. “It’s definitely the best office view you can have.”

The 138th flies and maintains 21 of the General Dynamics/Lockheed Martin F-16 “Fighting Falcons.” The plane is a multi-role, single-engine aircraft that can fly at more than twice the speed of sound and is designed for both air-to-air and air-to-ground combat.

The setup could involve two aircraft versus one, four versus two, or other situations involving both “enemy” fighters and simulated ground targets.

Pilots usually have at least a day after being briefed on a particular scenario in which they will be participating.

The flight exercises themselves may last as little as 20 minutes to more than two hours, depending on specifics and whether air refueling tankers are involved, pilots said.

“The coordination gets everybody on the same page. … Then you go out there and execute it, and then you come back and just talk about, ‘Hey, what could we have done better?’” Hondo said.

Despite its age — the F-16 was first flown in 1974 — the airplane has undergone many significant upgrades in radar, weapons targeting, communications and other systems that continue to make it a very capable aircraft, pilots said.

“The coolest thing is it just being a multi-role fighter jet, in my opinion,” said Lt. Burt Reynolds, 27, of Owasso, another 138th pilot.

“So we can do any mission that the Air Force has to offer, whether that’s air to air, air to ground, and it keeps things fresh," Hondo said.

“We use a building block approach — like a crawl-walk-run kind of format. So we’ll do like basic skills first, and then we’ll get more and more complex to lead to some pretty big scenarios, and so it’s pretty cool in that regard,” Hondo said.

Hondo, originally from northern Illinois, said that about a year ago, he was involved in a training exercise in which F-16s went up against the Lockheed Martin F-22 “Raptor,” considered by many to be the best fighter aircraft ever built.

“Honestly, a lot of the fights ended neutral. Some of our guys were killing the Raptors; some of the Raptors were killing us, but most of them (simulated dogfights) were ending up neutral.”

Hondo and Reynolds acknowledged aircraft capability is also extended to pilots — as much as possible — for advanced Russian and Chinese fighters, should conflict with those aircraft ever become a possibility.

Instead, the National Defense Authorization Act included provisions for continued upgrades to the 138th's F-16s, which an Inhofe staffer described as the best and most advanced in the military.

“I have been glad to work with my colleagues in the Senate and the folks at the 138th wing in Tulsa throughout the years to ensure they are well-equipped to complete their missions and do their jobs well — and they now have some of the best aircraft available,” Inhofe said in a statement to the Tulsa World in a request for this story.

“They’ve had tons of upgrades, and we’re actually getting more upgrades as we speak, because we are extending the life of these jets,” she said. “They’re doing these modifications so we can keep these aircraft flying and use them longer.”

Maintenance crew members speculated that depending on what repairs are needed, the jets could require up to 30 hours of maintenance for every hour of flight time, but sometimes much less.

Much of the maintenance is done at the base, but specialists are sometimes called in to assist, given the complexity of the aircraft and a multitude of systems on board, including hydraulics, computer-aided displays, radar and other avionics, and even explosives contained in the ejection seats.

Staff Sgt. Joseph Bridgers, 25, a maintenance crew chief, said one of the trickiest systems is hydraulics on the plane.

“It’s not so much that it's challenging, it’s just complex,” he said.

“The hydraulic system, subsystem and components control most everything on the aircraft — landing gear, flight controls, you name it. When one thing’s wrong, you have to chase it, and sometimes they’re tough to troubleshoot. They’re messy. You can get hydraulic fluid all over the place. It’s just a system that can either be a real easy fix or it can be a headache,” he said.

In addition to maintaining the aircraft, maintenance crews also play a key role in making sure systems on the plane are working properly before a pilot takes off. Many who are not officers have the authority to ground planes that they deem to have a potential problem.

“When it comes to them trusting us, they normally listen pretty easily,” Bridgers said of pilots. “It’s nice to know how much trust it is. You’re the last person they lock eyes with — you shake hands with — before they get into that airplane. They’re putting their full trust in you, making sure you’ve got your job done right.”

Reynolds and Hondo also lauded maintenance personnel on the base, saying they trust their assessments of potential problems.

"They can see things we can't," Reynolds said.

With the release of the movie “Top Gun: Maverick,” pilots Hondo and Reynolds said they were looking forward to seeing the film.

They both said the original "Top Gun" had its flaws — the main being the bitter rivalries portrayed among the pilots.

The mission of the unit is to defend the southern U.S. from New Orleans to Tucson, Arizona, "at a moment's notice," it states in a welcome package for visitors.

The 138th has participated in many combat missions, including in Iraq and Afghanistan.

“It’s a dream to both serve the community and the country,” Reynolds said. 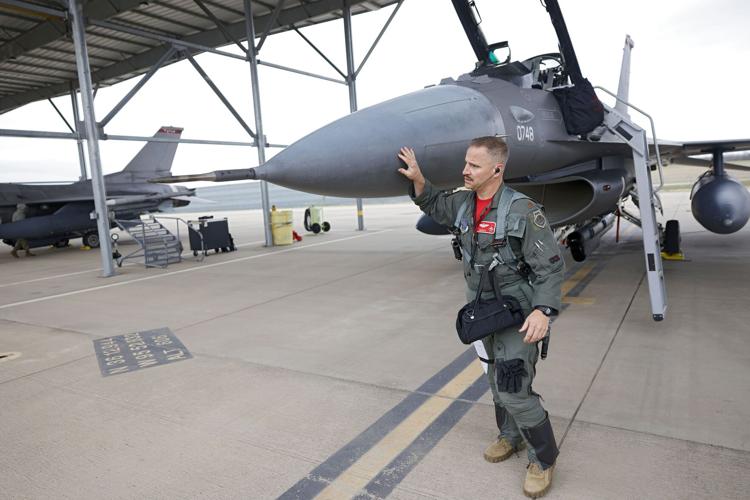 Maj. Richie Schuler Jr. prepares to take off in an F-16 from the Oklahoma Air National Guard 138th Fighter Wing. 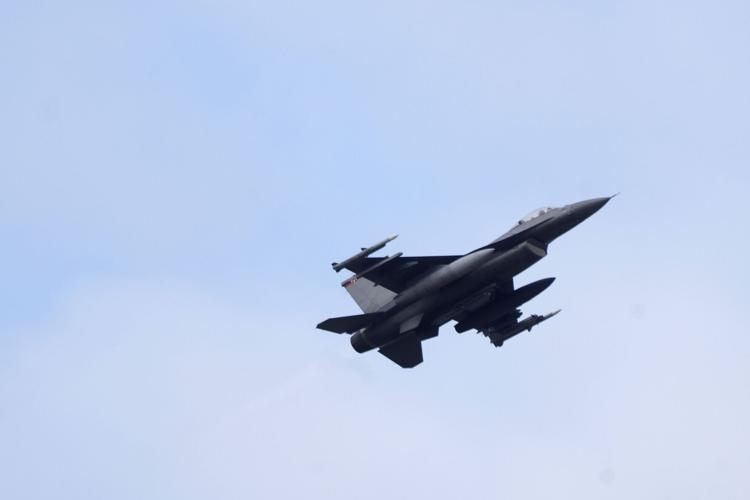 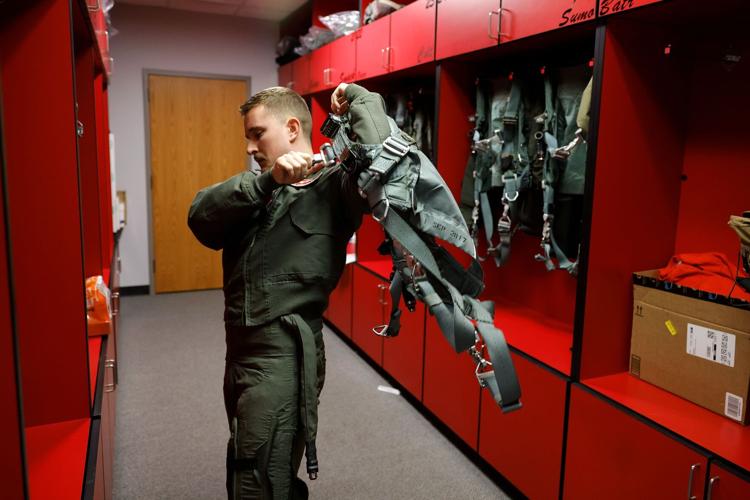 First Lt. David Hamilton gets suited up in the locker room to take off at the Oklahoma Air National Guard 138th Fighter Wing. 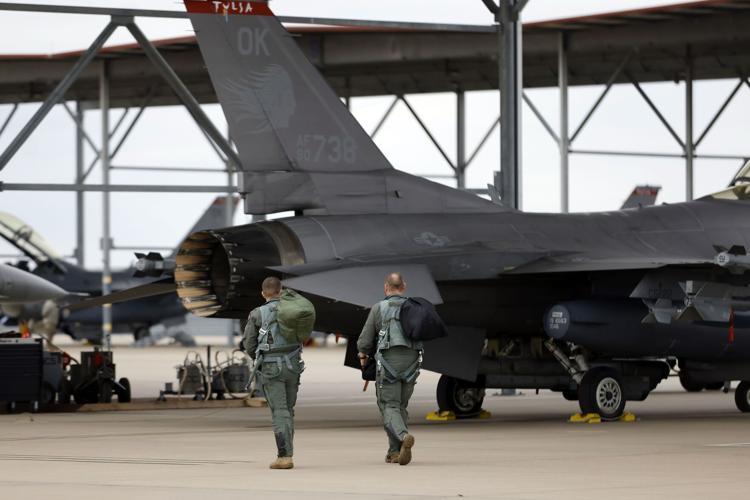 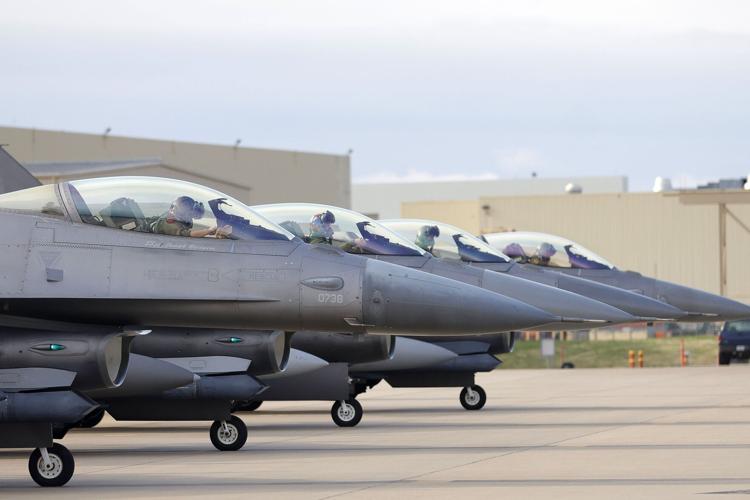 Pilots line up to take off at the Oklahoma Air National Guard 138th Fighter Wing in Tulsa. 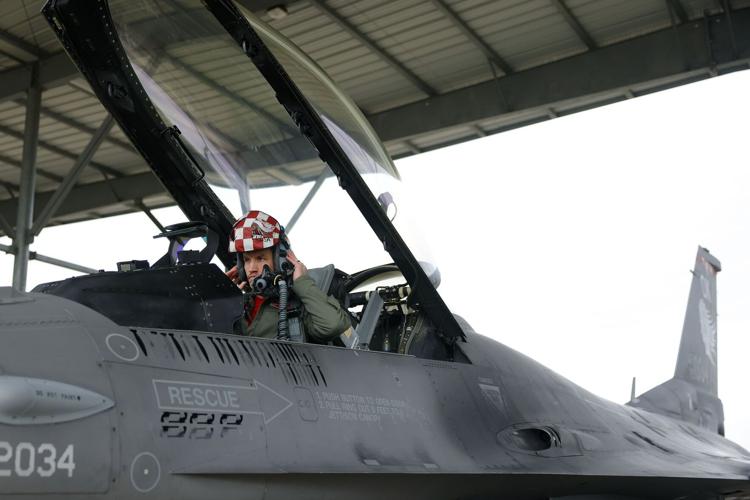 Capt. Michael Madaffri prepares to take off in an F-16 from the Oklahoma Air National Guard 138th Fighter Wing. 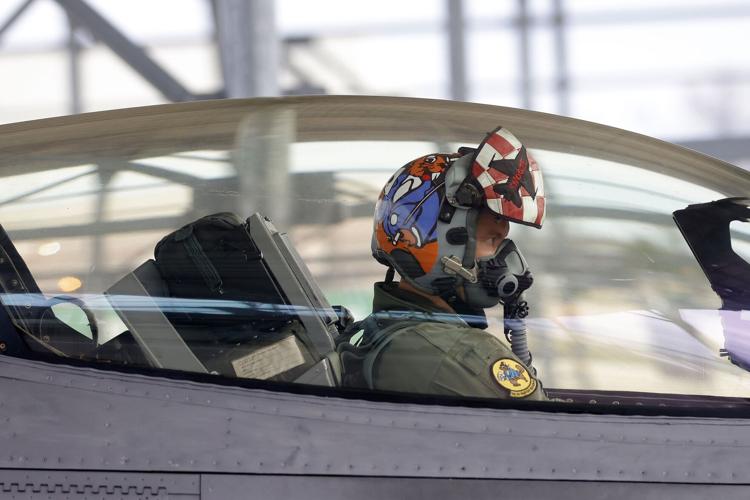