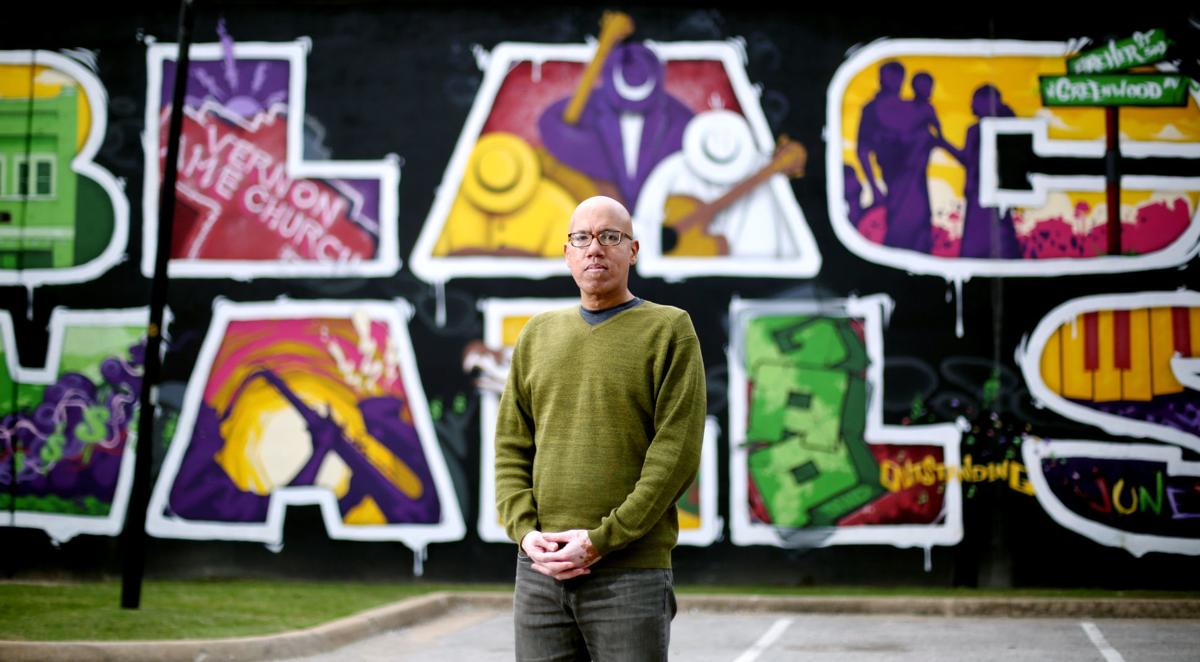 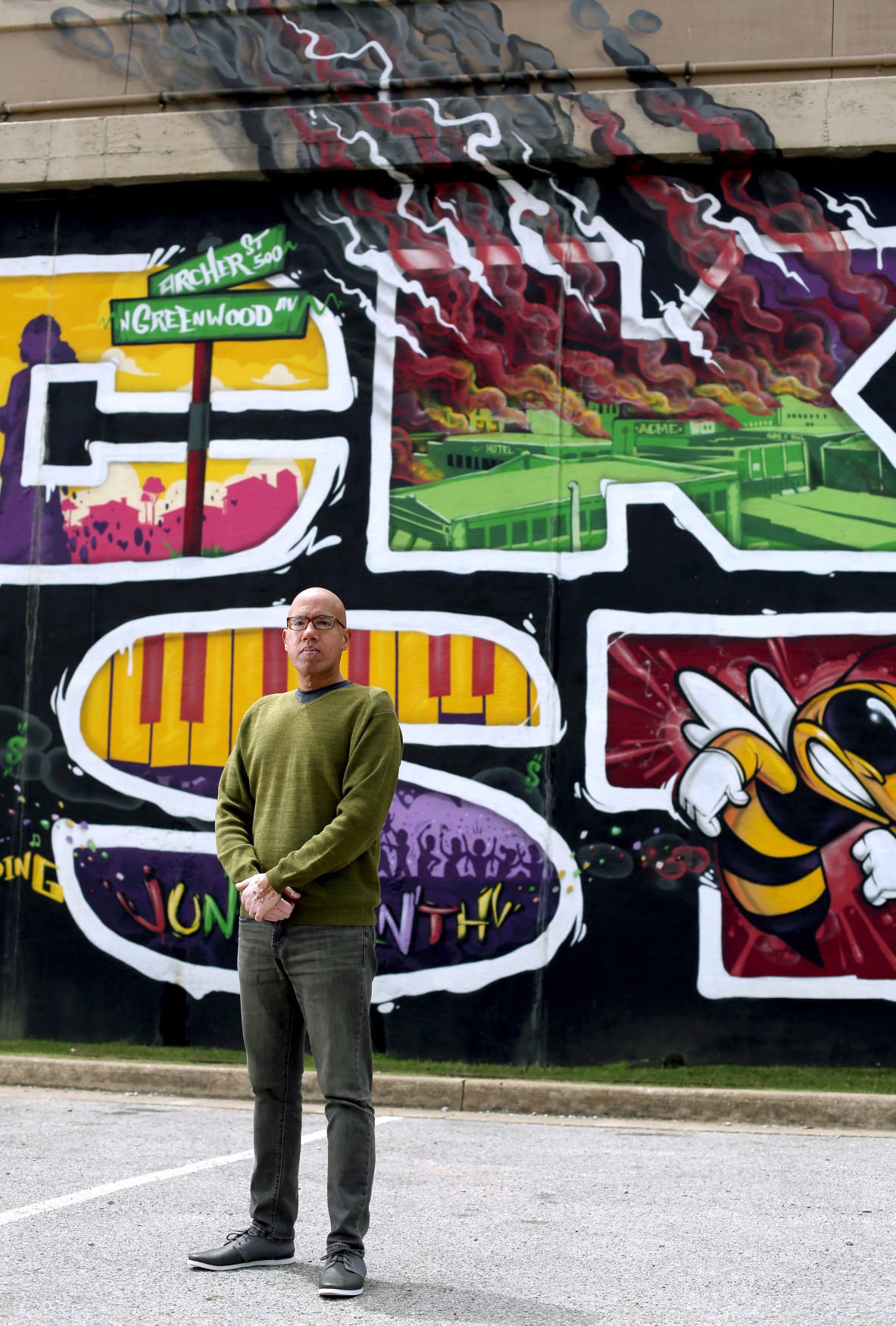 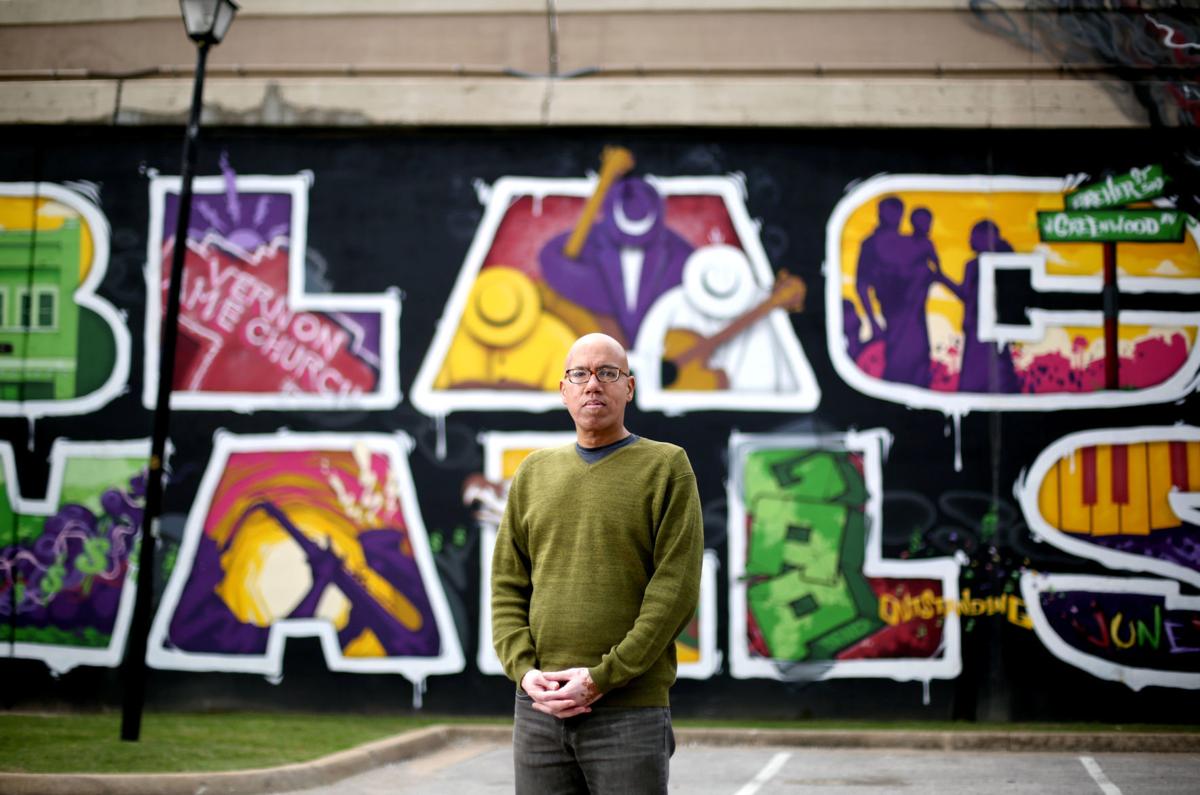 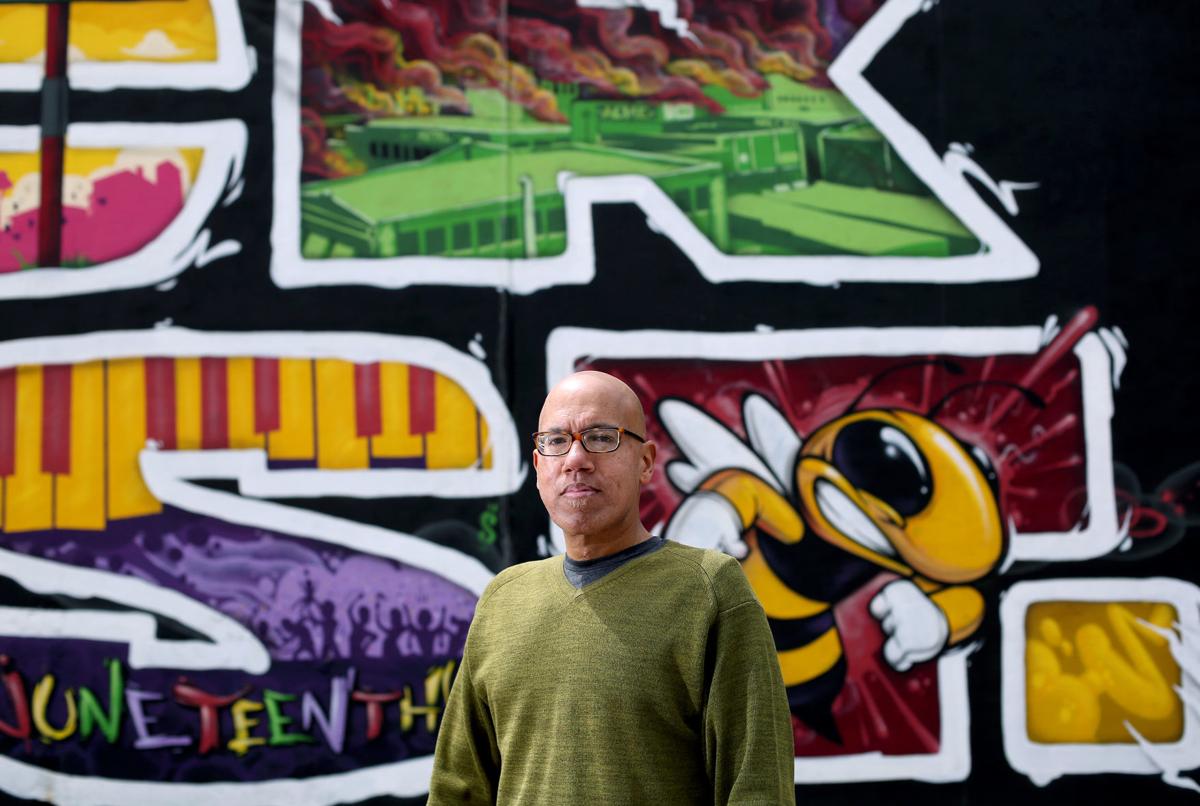 Arguably one of the most popular selfie locations in Tulsa is in front of a large wall in the Greenwood District.

On any given day, people traveling through the area often make a direct line to a colorful mural that simply reads “Black Wall St.” in cosmic block letters to take photos and study its symbolic meaning.

Poppy Kelley, an Edison High School teacher, was one of them. Late last month, Kelley was conducting a personal tour of the mural with her millennial son and his girlfriend.

While walking the length of the mural, Kelley — pointing to each letter — described to the youngsters what the accompanying images signify.

“When you learn about what Greenwood really was, it wasn’t a place where blacks once lived and had to go off to live and survive elsewhere,” Kelley said. “African-Americans had developed a fantastic and thriving community during the Jim Crow era and time of segregation. It (the mural) is a jumping point to understanding what this community was before the (Tulsa race) massacre.”

Since “The Black Wall Street Mural” was unveiled to the public last June in the 300 block of North Greenwood Avenue, it has become “impactful” to the community, said Mechelle Brown, Greenwood Cultural Center program coordinator.

The installation of the mural — the culmination of a 10-month project — was sponsored by the Tulsa Race Massacre Centennial Commission, TYPros Foundation and Fowler Ford. The project was ultimately created by Tulsa artist Chris “Sker” Rogers, along with fellow Tulsan Bill White and Kansas City artist Donald “Scribe” Ross.

The initial goals of the mural project were to spark conversations about Greenwood — both past and present incarnations of the area — and to increase cultural tourism in the district.

The acclaim the mural already has received, said Rogers, has been measured in not just general interest locally, but from all over the country.

For instance, when Method Man, a member of hip-hop group Wu-Tang Clan, visited Tulsa as part of filming for an upcoming TV show, he made it a point to take a photo of the mural.

The creation also provided the backdrop for an October 2018 Lowrider Magazine photo shoot that featured a 1975 Chevrolet Caprice.

Rogers, who has also helped create murals in the Kendall-Whittier neighborhood and Tulsa Arts District over the years, said no other project he’s been associated with has possessed the same communal impact as the Black Wall Street one.

“This is definitely impactful to be part of something so big,” Rogers said. “It is really an honor for me. I think it’s the most impactful mural in the city of Tulsa because of the community it represents and the spirit of pride it represents.”

“People are fascinated by the mural itself and learning more about what the letters mean,” she said.

Each letter of the mural, Rogers said, portrays imagery that relates to the stories and the people of Greenwood from its past, present and future.

The “B” symbolizes the once strong and thriving business community that defined Black Wall Street and includes an image of the Williams Dreamland Theatre. The initial “L” pays tribute to Vernon African Methodist Episcopal Church, one of north Tulsa’s oldest institutions, which was added to the National Register of Historic Places in 2018.

The “A” acknowledges the soulful north Tulsa music community that helps energize Greenwood.

The “C” shows the tight-knit family that has always been at the heart of the community.

A “K” depicts the flames and destruction that devastated the Greenwood District during the 1921 Tulsa race massacre.

The “W” has two distinct representations. The portrayal of the 1920s vehicle symbolizes the economic engine that drove the sustained success of Greenwood at its height. The dollar signs portray the slow disintegration of wealth from the community over time.

Another “A” salutes prior artwork that was displayed on the wall before the current mural project.

The second “L” pays homage to The Oklahoma Eagle, which is Tulsa’s lone black-owned newspaper.

An “S” highlights the tradition of Juneteenth celebrations.

The “T” — featuring the image of a hornet — recognizes Booker T. Washington High School, which was once in Greenwood. Further descriptions of the letters can be found on a plaque positioned next to the mural written by Greenwood historian Hannibal B. Johnson.

So far, the mural has gone a long way in accomplishing its intended mission of influencing a renewed interest in Greenwood’s history and its present-day place in Tulsa, Rogers said.

“While this (mural) is not going to take the place of a textbook or a proper study of what’s happened in the past, there are different ways of learning and getting inspiration,” Rogers said. “We realized that we can’t teach people by creating a mural, but we can inspire people to want to learn more.”