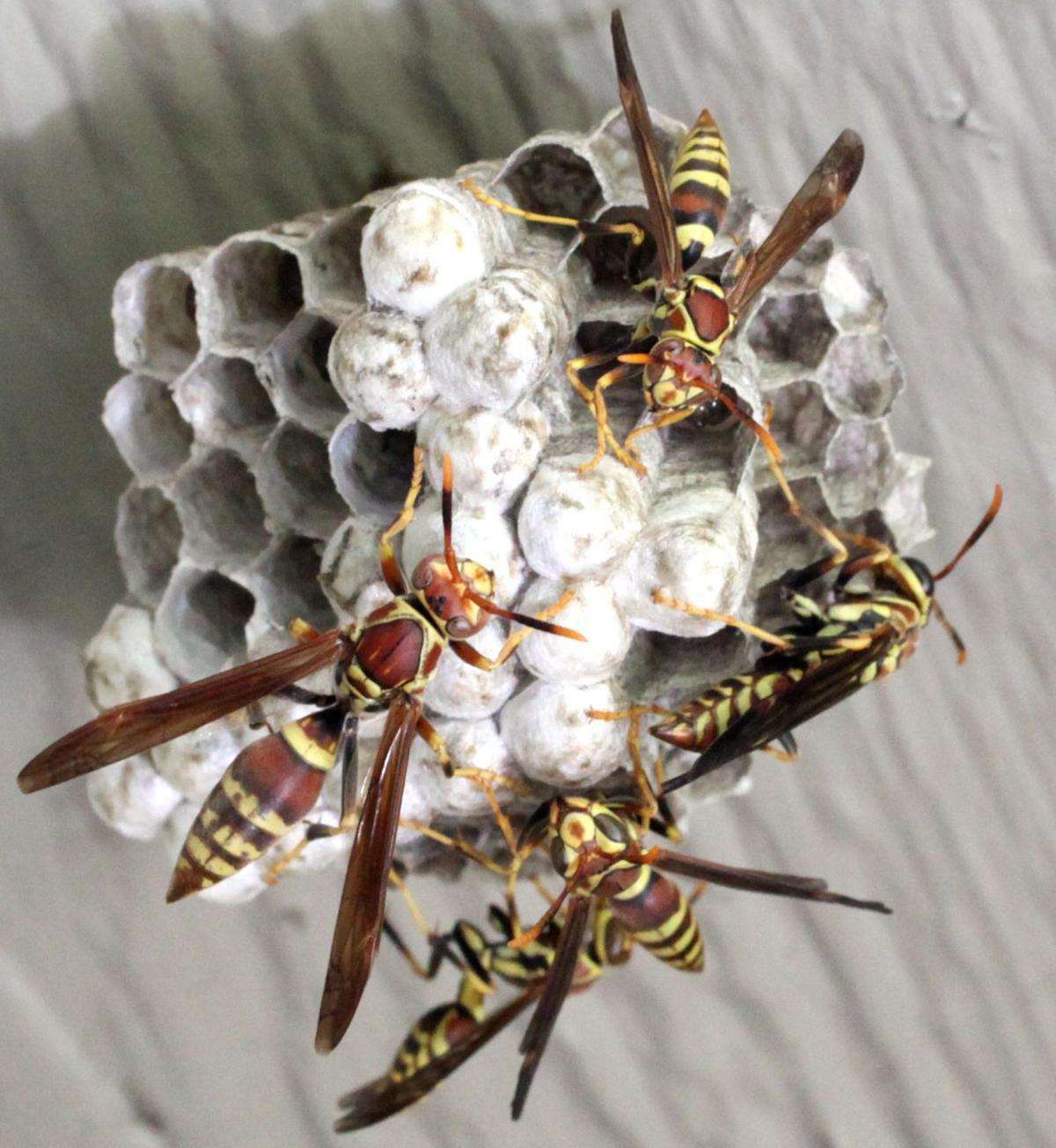 Paper wasps are ones that most of us are probably familiar with, as they build those paper-like umbrella shaped nests you have probably seen under the eaves of your homes or any number of other places. 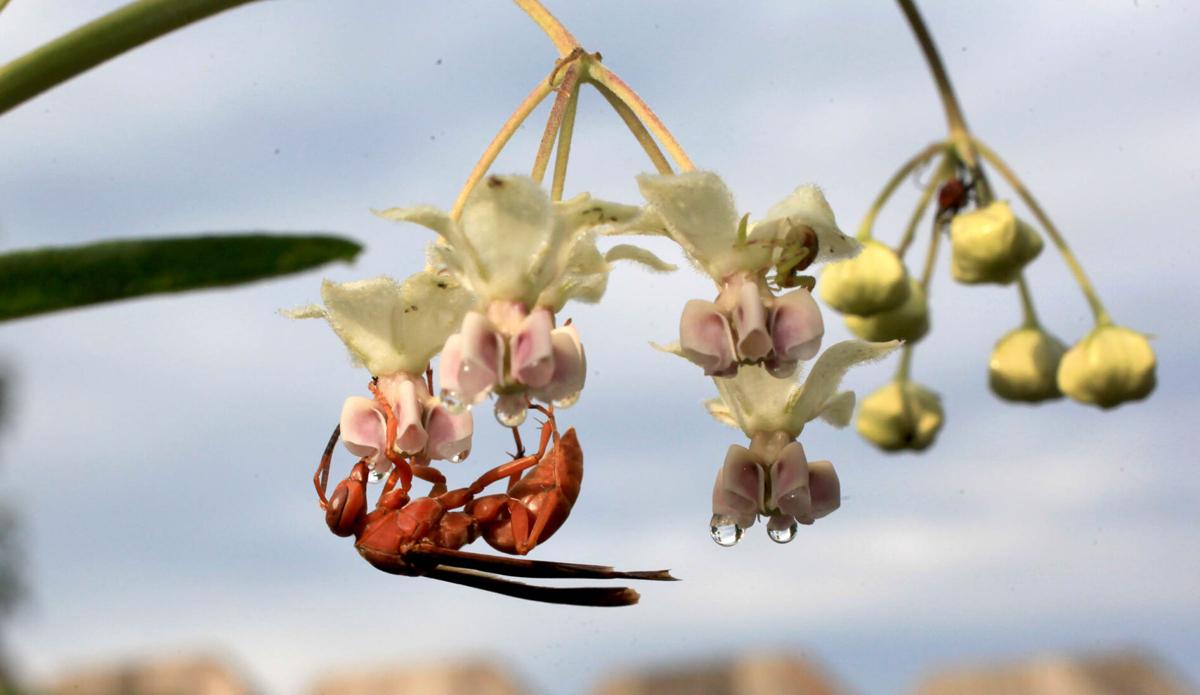 While wasps can give some people the creeps, they are an integral part of our environment and ecosystem.

A lot of people have a fear of anything that can sting, especially wasps. I was in this camp until a few years back, but then I began to become more open-minded about our insect friends, even though I got stung by one a few weeks ago. In reality, it was my fault for accidentally messing with its home, but that’s another story.

But yes, there are several wasps that are beneficial for gardeners because they capture and devour destructive caterpillars we don’t like to have in our garden. So let’s talk about some wasps. If you are a tender soul, just remember, this is how nature works.

One of those “good guys” is the Braconid wasp. The Braconid wasp is rarely more than ½ inch in length and is generally dark in color with four transparent wings. One thing that distinguishes it from other wasps is that it is a parasitic wasp, meaning they use other insects to serve as hosts for their young. While a variety of insects can become their victims, perhaps the most notable one for gardeners is the dreaded tomato hornworm.

The female Braconid wasp has a rather long and sharp ovipositor (the part of the body the female uses to deposit her eggs). The female deposits up to 60 eggs just under the skin of the hornworm. Interestingly, when the female wasp injects her eggs into the hornworm, she also injects a virus called a polydnavirus. This virus helps prevent the immune system of the hornworm from defending itself against these intruders. There are also special hormone-releasing cells from the eggs that prevent continued development in the hornworm so that it remains a suitable host.

When the eggs hatch, they begin to feed on the tomato hornworm internally. Once mature, the larvae chew their way out of the hornworm, spin a small cocoon and pupate. When the adult wasps emerge from their cocoons, the hornworm dies.

So if you see a tomato hornworm covered in small white cocoons, just leave it because it is hosting a new batch of parasitoids that can help rid your future garden of hornworms in about the most nature-friendly way we have. And I think most gardeners would call that a good thing.

Paper wasps are ones that most of us are probably familiar with, as they build those paper-like umbrella-shaped nests you have probably seen under the eaves of your homes or any number of other places. While they can sting if disturbed, they are mainly out there looking for food for themselves and their young. These wasps can be yellow, black, brown and red, depending on the species, and are usually ¾ to 1 inch in length. Their nests are constructed of chewed up wood and plants mixed with saliva.

New wasp colonies begin in the spring when a female leaves her hibernation site to build a nest. Most nests begin with a solitary female, but others join her to help build the nest and care for their young. The colony usually reaches its maximum size in late summer or early fall with 20 to 75 adults with nests that can vary from 3 inches to 10 inches in diameter. In the fall, the wasps seek mating partners. The males die off, and the females begin looking for a site to overwinter. The cycle begins again in the spring.

Adult paper wasps primarily feed on nectar from flowers and juice from a variety of fruits. We consider them beneficial because during the season they will also capture a wide variety of caterpillars from the surrounding area and take them back to their nest to feed their young. Favorite caterpillar delicacies would include corn earworms, armyworms, loopers and hornworms. Additional food sources would include beetle larvae and flies.

The Cicada Killer wasp is another interesting wasp you might encounter. This wasp is one of the largest wasps in North America, growing up to 2 inches in length. That is a sizable wasp. We have gotten calls at our Diagnostic Center from people thinking they have seen the new Asian giant hornet we have heard about in the news, but the Asian giant hornet has not been spotted in this part of the country yet.

These sizable wasps create burrows underground for their homes. The burrows will typically be near a tree that is home to cicadas. They get their name because they prey on cicadas. These wasps will sting a cicada (sometimes in mid-flight) to paralyze it and carry it back to their burrow. The female then deposits an egg on the cicada and places both in a cell in the burrow. After two or three days, the eggs hatch and begin to feed on the paralyzed cicada.

These burrows are about a ½ inch in diameter and can be several inches deep. The burrows are usually accompanied by a mound of dirt around the entrance. Sometimes skunks will dig up these burrows to feed on the cicadas and wasp larvae.

While wasps can give some people the creeps and you may still remain unconvinced of their usefulness, they are an integral part of our environment and ecosystem. If possible, it’s good to give them their space and learn to live and let live.

What the Ale: Duncan’s Kochendorfer Brewing Co serves up beers in Stephens County

Get answers to all your gardening questions by calling the Tulsa Master Gardeners Help Line at 918-746-3701, dropping by the Diagnostic Center at 4116 E. 15th St., or by emailing mg@tulsamastergardeners.org.

Make your house a home

For the holidays: Get inspiring home and gift ideas – sign up now!

Paper wasps are ones that most of us are probably familiar with, as they build those paper-like umbrella shaped nests you have probably seen under the eaves of your homes or any number of other places.

While wasps can give some people the creeps, they are an integral part of our environment and ecosystem.