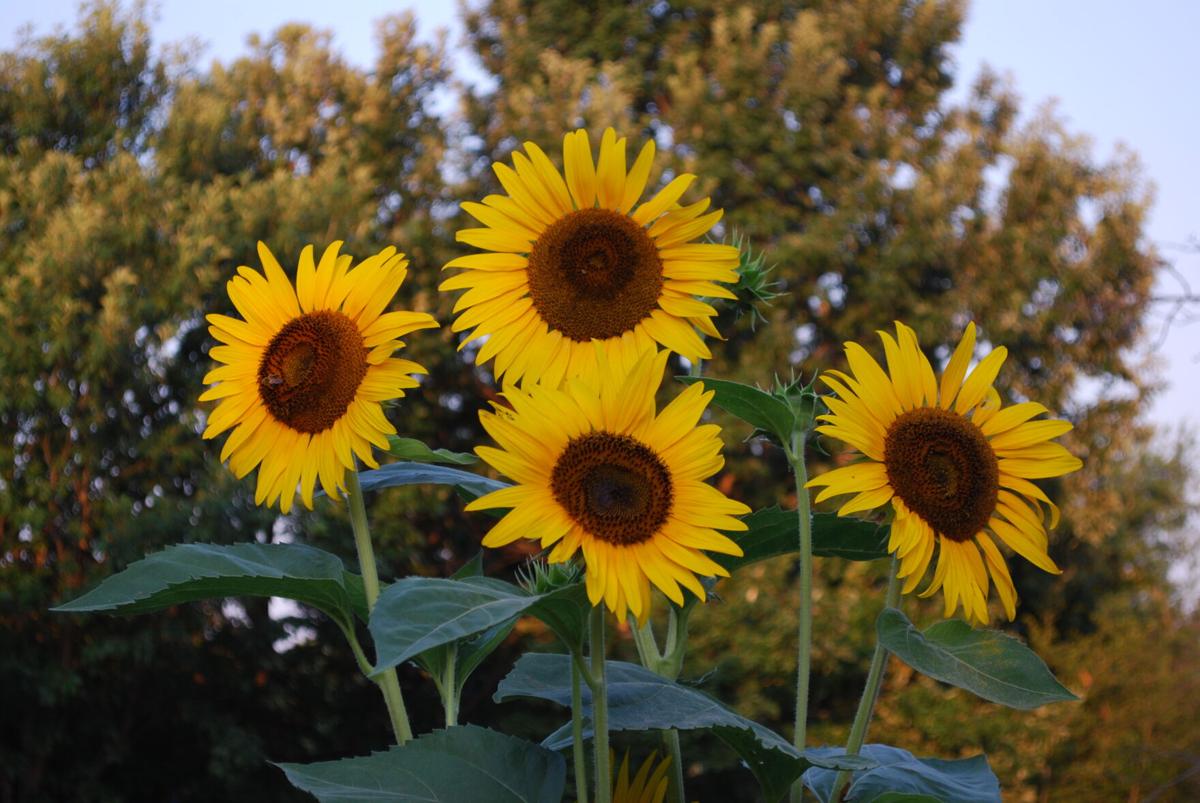 Sunflowers grow exceptionally fast, particularly the giant varieties, and may need staking against the wind. 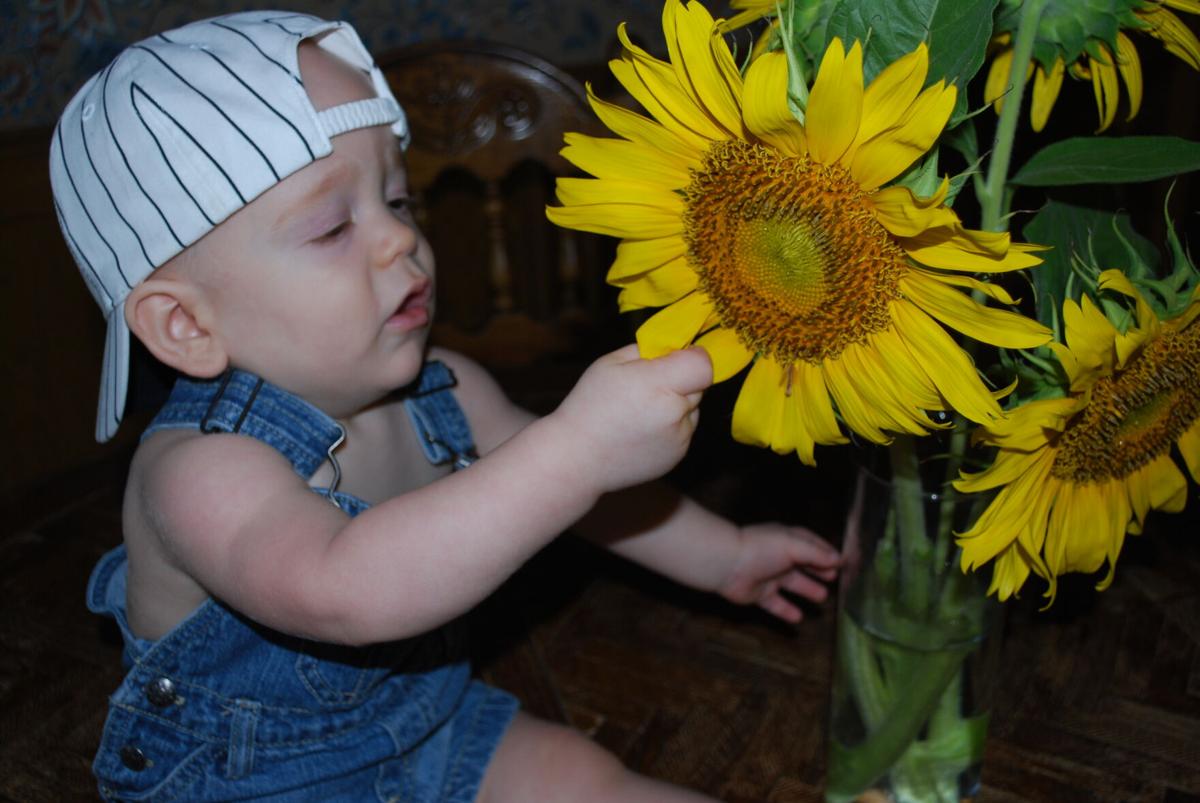 If your goal is to get kids interested in gardening, plant sunflowers.

A strong case could be made that the western plains of North America produced the most beloved of all flowering annuals: Sunflower.

I’m not suggesting that this American native is the most beautiful of all flowers. There are, after all, literally thousands of beautiful annual flowers. And beauty, as the old saying goes, is in the eye of the beholder. That said, I can’t think of a single flower that provokes more smiles from admiring onlookers. Perhaps that is why the most commonly used emoji closely resembles a smiley face sunflower.

The history of the sunflower also is fascinating. American Indians, who shared the western plains with the amazingly heat and drought tolerant sunflower, used it as a food source. Sunflower’s large seeds were roasted and ground into flour to make breads.

Spanish explorers, while looking for gold and treasures in North America, were the first to transport sunflower seeds back to Europe. The first published record of sunflowers in Europe was by a Belgian herbalist in 1568. By the late 1600’s bright yellow sunflowers were common in English and Continental gardens. And by the late 1700’s, Europeans discovered what American Indians had long known: that sunflower seeds were tasty and nutritious. I ran across this interesting quote by Charles Bryant who, in 1783 wrote: “Sunflower seeds have as agreeable flavor as almonds and are excellent food for poultry.”

Agreeable flavor indeed! A week rarely passes that I’m not snacking on a pocket full of salted sunflower seeds, a habit I acquired during years of playing high school and college baseball. The All-American sport would surely collapse tomorrow were it not for buckets full of sunflower seeds in dugouts. Mercifully, most modern players prefer to pack the space between their cheek and gums with sunflower seeds rather than nasty chewing tobacco.

The sunflower is a member of the Compositae family, the second largest plant family. Other prominent family members include: Aster, marigold, black-eyed-Susan, and dandelions. Sunflowers are of the genus Helianthus, coming from the Greek word helios (sun) and anthus (flower). There are well over 60 sunflower species, the most common being Helianthus annuus (annual), named by the famous Swedish taxonomist Carl Linnaeus in the mid-1700s. Hybrids of this amazing species are mostly what gardeners will find at garden centers and on seed racks.

Hybrid sunflowers are exquisite garden plants. As the name suggests, they love full sun locations and lots of summer heat. Sunflowers come in many radiant colors: Yellow, gold, bronze, mahogany red and bicolor. And if your goal is to get kids interested in gardening, plant sunflowers. My grandkids love the giant hybrid sunflowers such as Russian Giant and Mammoth that grow to a height of 6 to 10 feet and produce huge dinner plate size flowers 15 to 20 inches in diameter!

Sunflowers grow exceptionally fast, particularly the giant varieties, and may need staking against the wind. If giant flowers aren’t your cup-of-tea, there are lots of new dwarf hybrid sunflowers that top out at a modest 15 to 20 inches. Dwarf varieties are my favorite cut-flower plants. A vase of freshly cut sunflowers is simple exquisite. Hybrid dwarfs also thrive in containers on a sunny patio.

Let’s fill our gardens with lots of gorgeous spring flowers. COVID depression is no match for smiley face sunflowers.

Barry Fugatt is a landscape horticulturist. He may be reached by email: barryfugatt@cox.net

Watch Now: Why does the second COVID shot cause trouble?

Make your house a home

For the holidays: Get inspiring home and gift ideas – sign up now!

Master Gardener: Tips to be more successful with the top home garden crop

Let’s talk about a few things you can do to improve your chances for a great crop of tomatoes.

Master Gardener: Lure more birds to your yard with these three things

It seems like the older I get, the more interest I have in birds. They are so beautiful and fun to watch. What can I do in my yard to attract more birds?

If we gardeners play our cards right, we can put the good bugs — praying mantises, ladybugs and lacewings — to work on our behalf.

A home in Minneapolis has been transformed from a 1920s Craftsman "Granny house" into an homage to Bali. See the magical makeover in photos.

Hummingbirds are headed our way

There is a website called www.hummingbirdcentral.com which tracks the hummingbird migrations on a map. They appear to still be in Texas, but they are moving our direction.

The cities spending the most on residential construction

One of the major housing market trends that has emerged from the COVID-19 pandemic is a preference for single-family housing, and this increased demand is driving a surge in new home construction.

I am seeing webs of some kind of insect in my tree where the branches join. What are these and what should I do about them?

Mirror, mirror, on the wall, what’s the fairest way to decorate of all?

Mirrors can be used for both function and pure decoration. How best to use them? Here are some ideas to get you started.

Whether you’re a beginner gardener or just want to take things easy, there are plenty of vegetables you can grow without much effort.

Sunflowers grow exceptionally fast, particularly the giant varieties, and may need staking against the wind.

If your goal is to get kids interested in gardening, plant sunflowers.