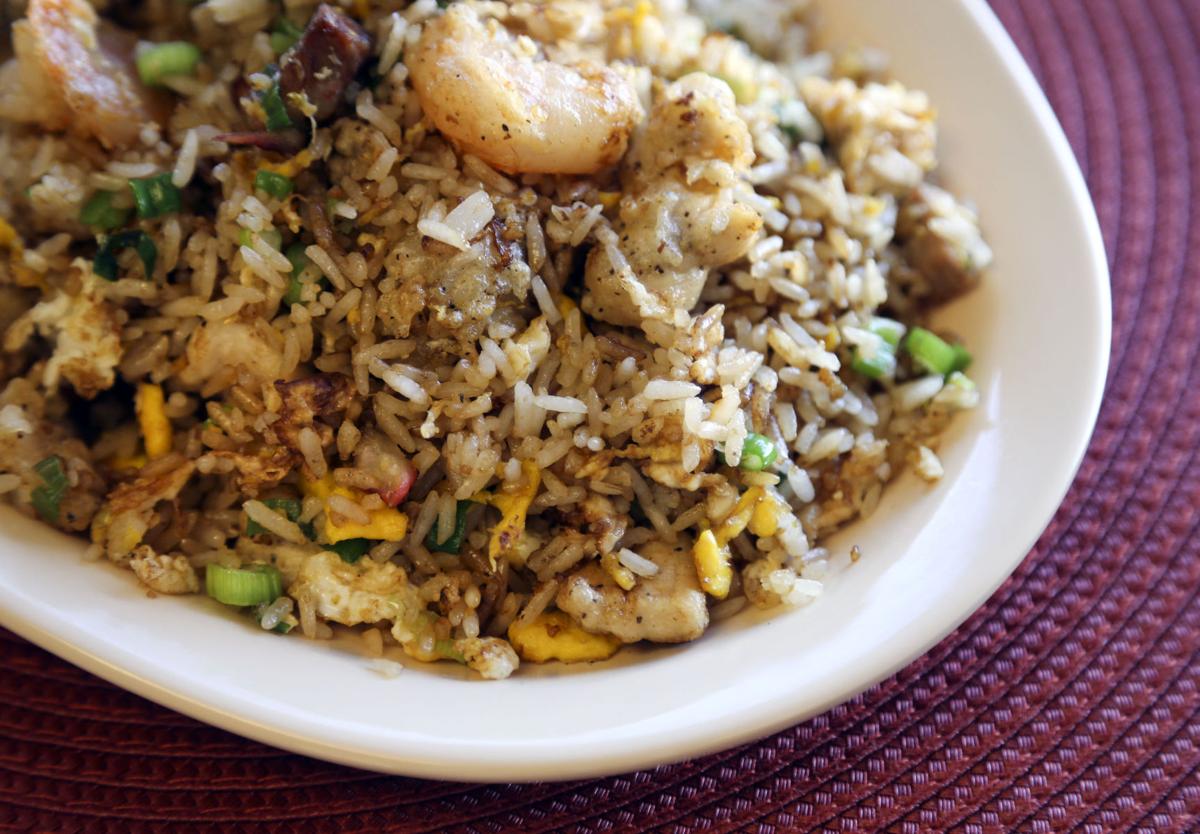 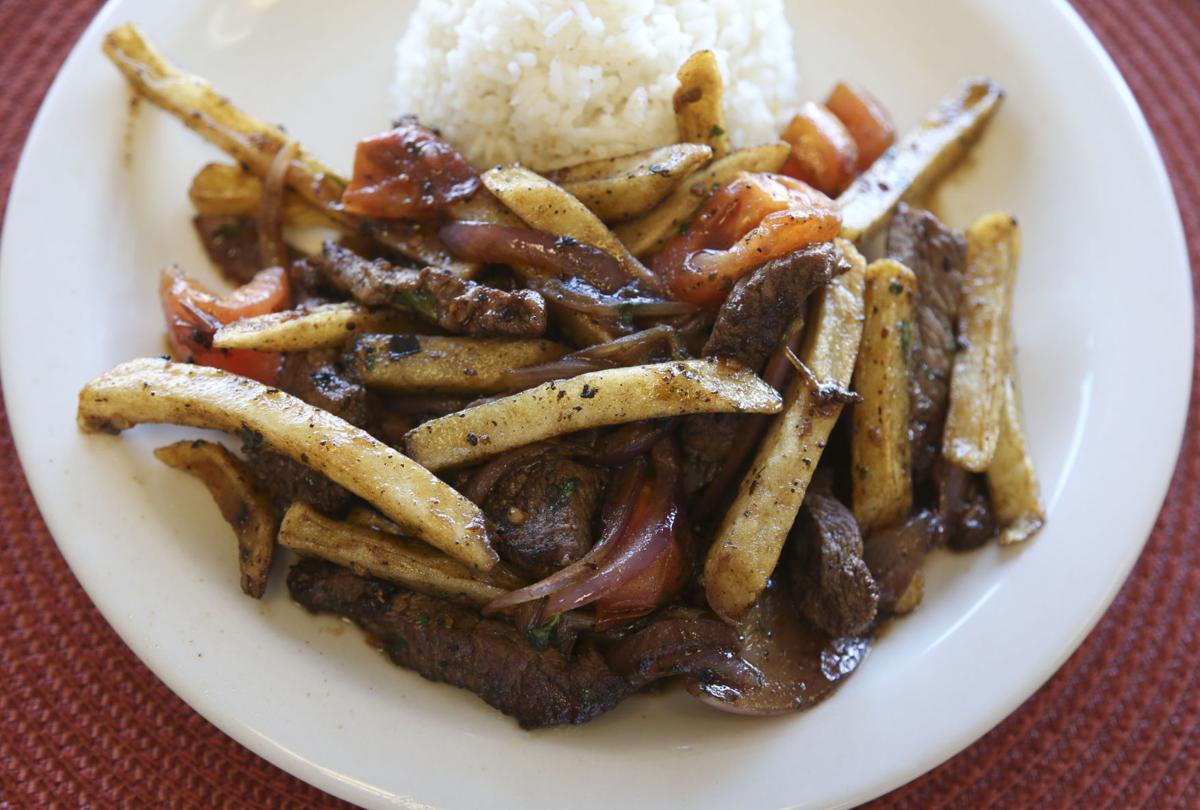 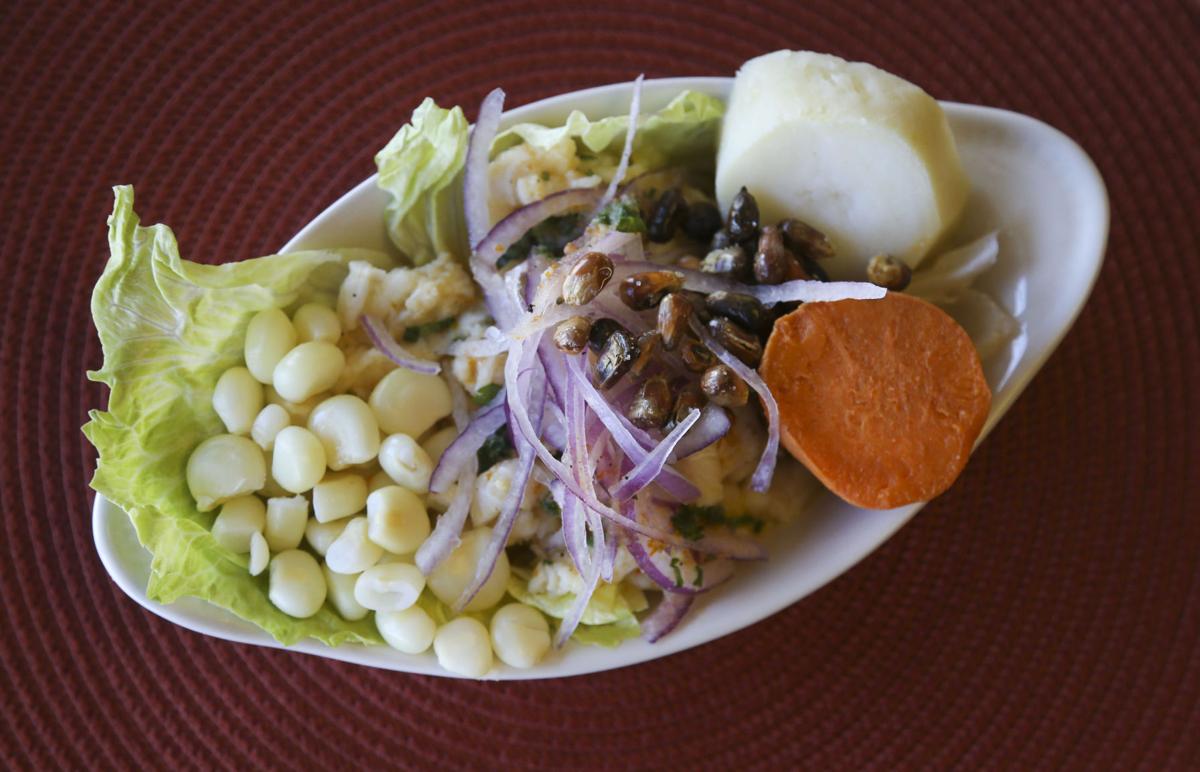 The ceviche de pescado features a bowl of diced fish marinated in lime juice and served with a slice of potato and yam and garnished with thinly sliced red onion and fried corn at Pachac Peruvian Food. JESSIE WARDARSKI/Tulsa World 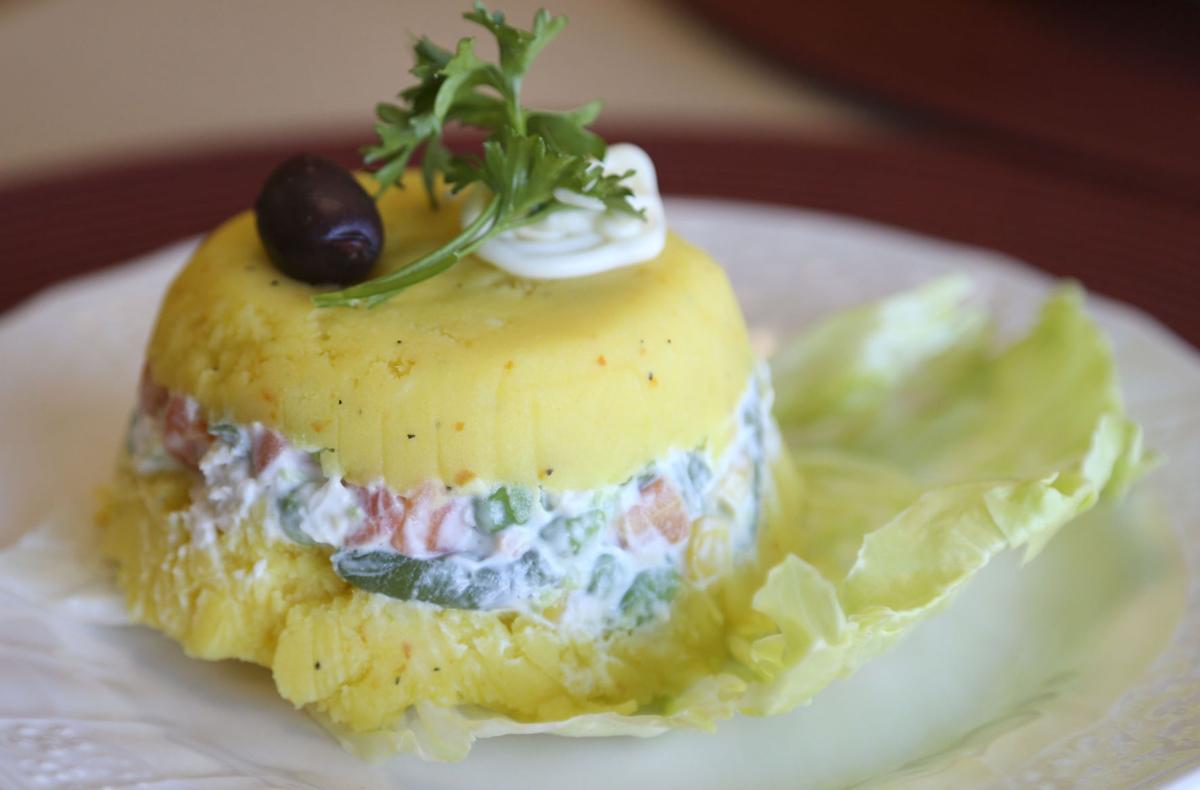 Causa de pollo is an appetizer featuring a “bun” of seasoned mashed yellow potatoes filled with chicken salad and garnished with parsley and a black olive. JESSIE WARDARSKI/Tulsa World 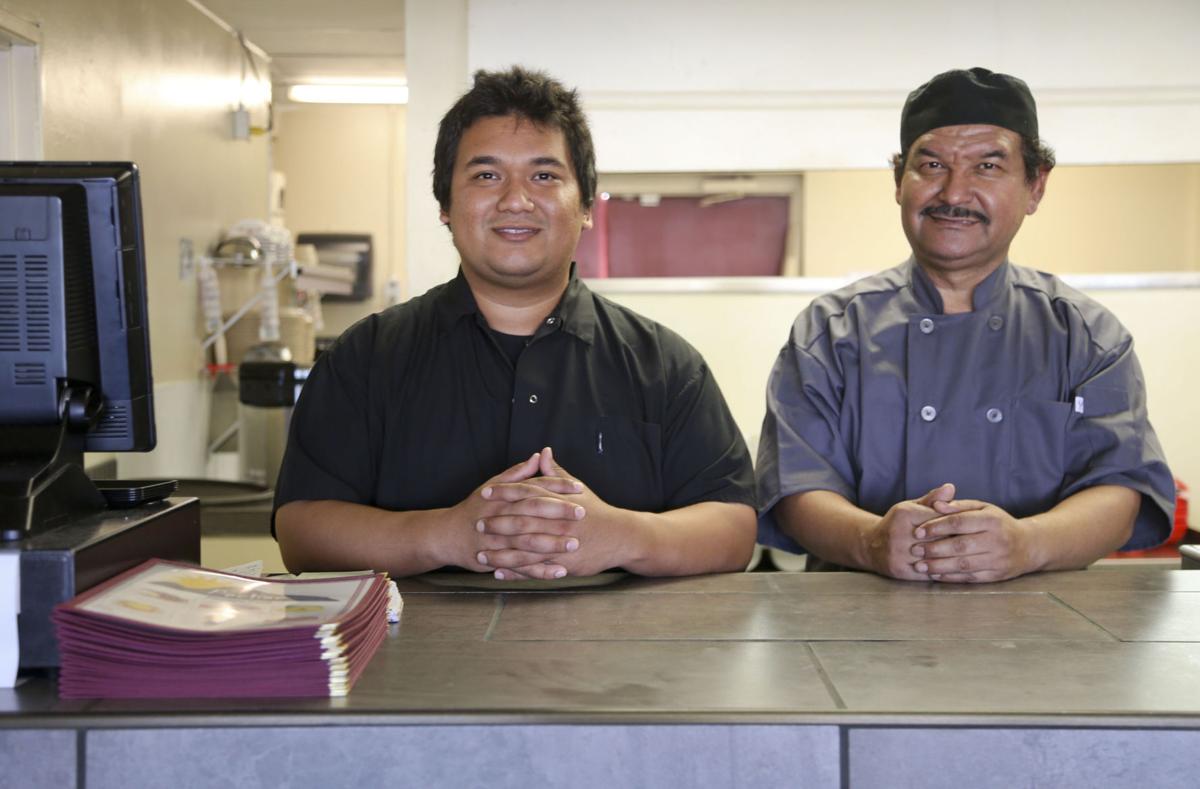 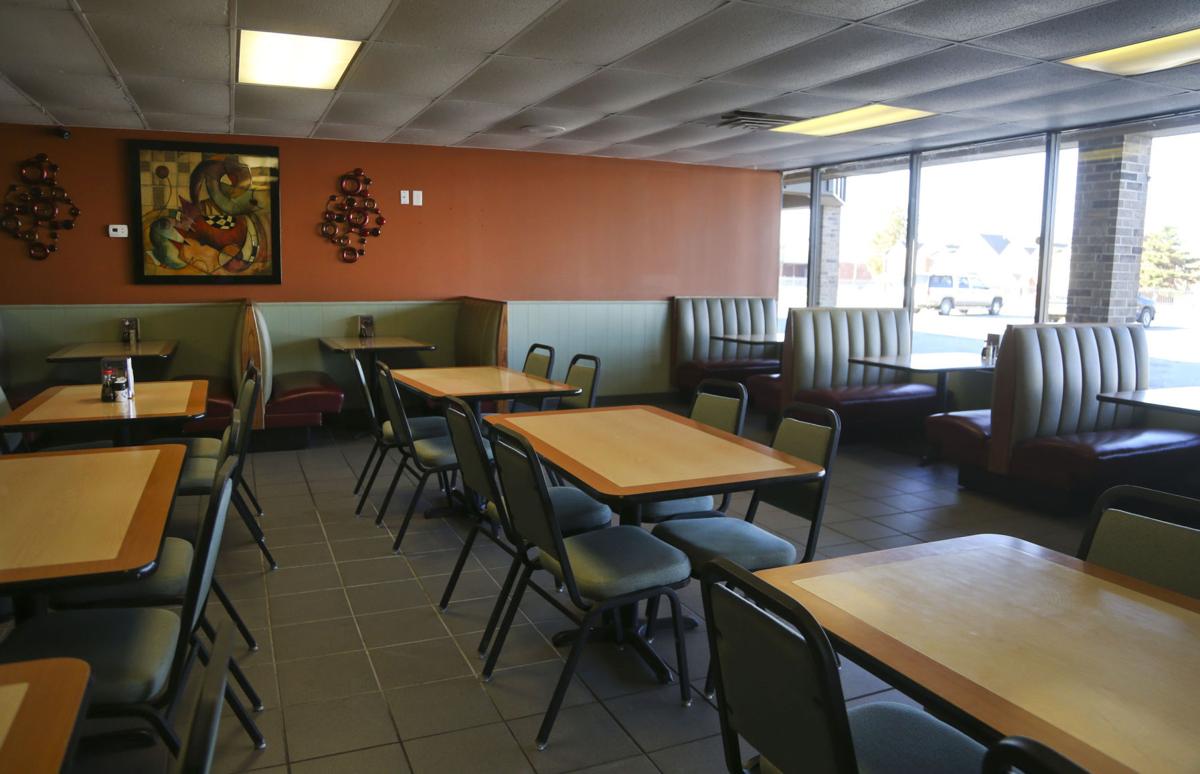 “Because of the large number of immigrants, most Peruvian food is some kind of fusion — Peruvian Italian, Peruvian German, Peruvian Spanish, Peruvian Chinese,” Humberto Nieri Jr. said. “Ours is more like a traditional chifa restaurant.”

Chifa is a fusion of Cantonese Chinese and traditional Peruvian ingredients, such as native peppers, potatoes and legumes. It is estimated that some 6,000 chifa restaurants are located in Lima.

We recently visited the only one in Tulsa, located in a strip center just across the 21st Street bridge.

The appetizers looked interesting, including one called salchipapas, which featured fries and hot dog slices topped with ketchup, mustard and mayo. Sounds like some pretty fine ballpark fare to me.

Instead, we chose causa de pollo ($5.95). It had the shape of something like a hamburger, except the “buns” were made of room temp yellow potatoes and the filling was much like a traditional American chicken salad.

Aji amarillo, yellow chilies common in Peruvian cooking, gave the dish a nice, late kick that was spicy but not fiery.

Both dishes included shrimp, chicken and pork, and both had the flavor of a soy-based sauce. The arroz chaufa was a fried rice dish with mixed veggies and a little fried egg. The tallarin chino featured chow mein with bean sprouts, bok choy and wide strips of red onion.

The chicken and pork were tender and tasty in both dishes, while the shrimp had a fairly strong fishy flavor.

Our server, Danna, suggested we sample chicha morada ($2.50), a slightly sweet beverage made with Peruvian purple corn, pineapple, cloves, lime juice and cinnamon. Probably because of the cloves and cinnamon, it tasted like Christmas and would make a pleasant holiday drink.

We later learned Danna is a daughter of the Nieris, which might explain to some degree why she was so well-versed in the menu and ingredients.

Pachac has a mix of booths and tables, and the light green and caramel walls are decorated with shiny, contemporary wall hangings, Peruvian wall hangings made with alpaca wool and prints of Marilyn and Elvis.

Nieri said his parents, who still do much of the cooking, came to California 25 years ago to join a family business deal that went south almost immediately.

“My father didn’t speak English at the time, and he had no job or anywhere to go,” Humberto Jr. said. “It was pretty rough for a while, but we survived and we’ve done pretty well.”

Humberto said his parents most recently owned a Chinese-Thai-Peruvian restaurant in Las Vegas for nine years. After closing it, they took some time off to visit friends in Tulsa and Peru.

“We decided to come back to Tulsa and open a restaurant here,” he said. “We’ve been open three months, and it has gone pretty well. Peruvian people come in and tell us it feels like home back in the day.”

Crazy for shakes: Six shakes to find and one to make at home

National Chocolate Milkshake Day falls on Saturday, Sept. 12, throwing out a great excuse to stop into your favorite shake shack for a luxurious chocolate milkshake.

Something fishy happened this summer. Instead of the typical perfectly grilled chicken or juicy grilled steaks, Americans were searching for something else to grill this summer: salmon.

Jazz up basic side dishes with MIO Coalition ingredients

Starbucks is finally ditching straws and ushering in its long-awaited "sippy cup" lids for iced beverages.

Church cookbook recipes that bring back memories of togetherness

Paging through "The Vintage Church Cookbook: Classic Recipes for Family and Flock" by Parrish Ritchie (Countryman Press, $22.95) was a bit like opening a time capsule.

Few meals are more versatile than brisket. It can be served as a weeknight dinner meal, on game days, holidays and more.

The ceviche de pescado features a bowl of diced fish marinated in lime juice and served with a slice of potato and yam and garnished with thinly sliced red onion and fried corn at Pachac Peruvian Food. JESSIE WARDARSKI/Tulsa World

Causa de pollo is an appetizer featuring a “bun” of seasoned mashed yellow potatoes filled with chicken salad and garnished with parsley and a black olive. JESSIE WARDARSKI/Tulsa World