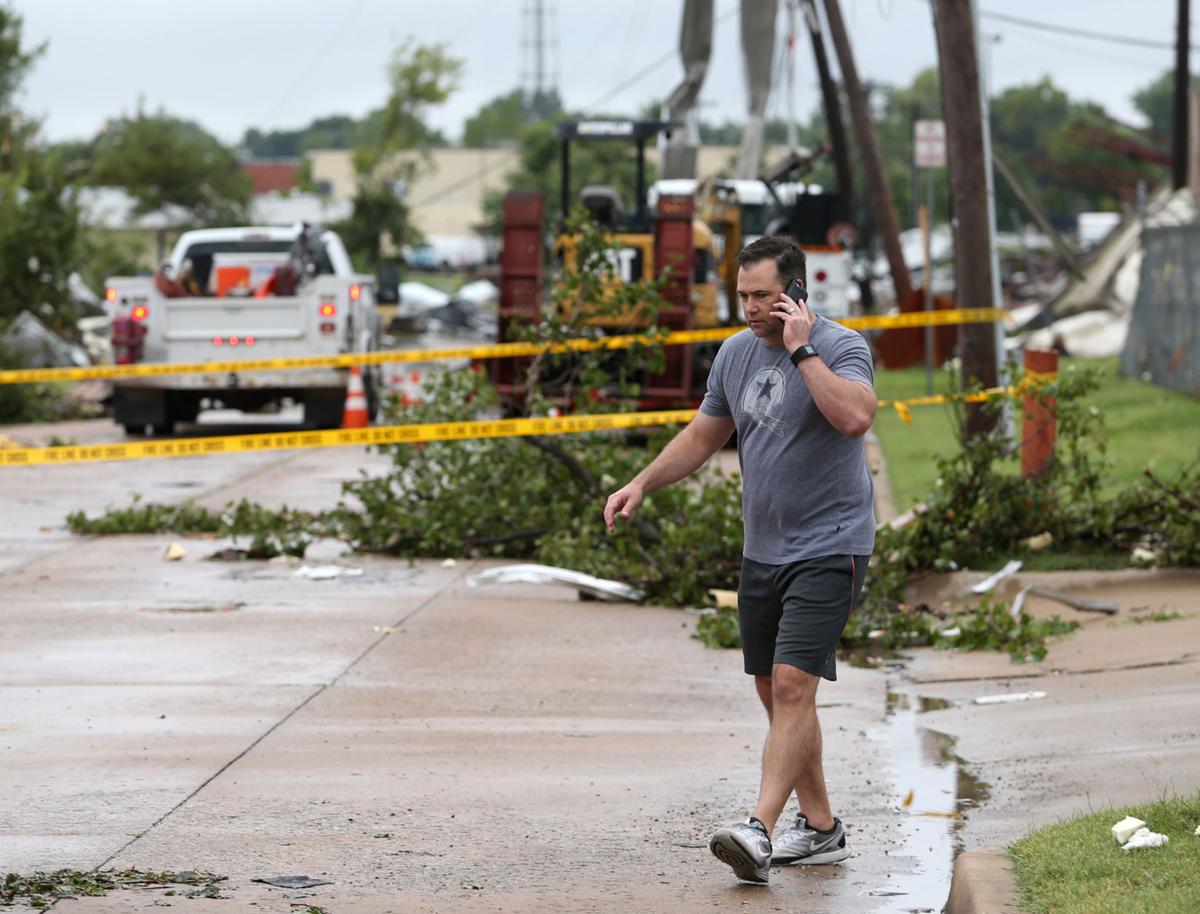 Rolsch Cooper talks on the phone after surveying damage at his workplace near 41st Street and Sheridan Road in Tulsa, Okla., on Sunday, August 6, 2017. MATT BARNARD/Tulsa World 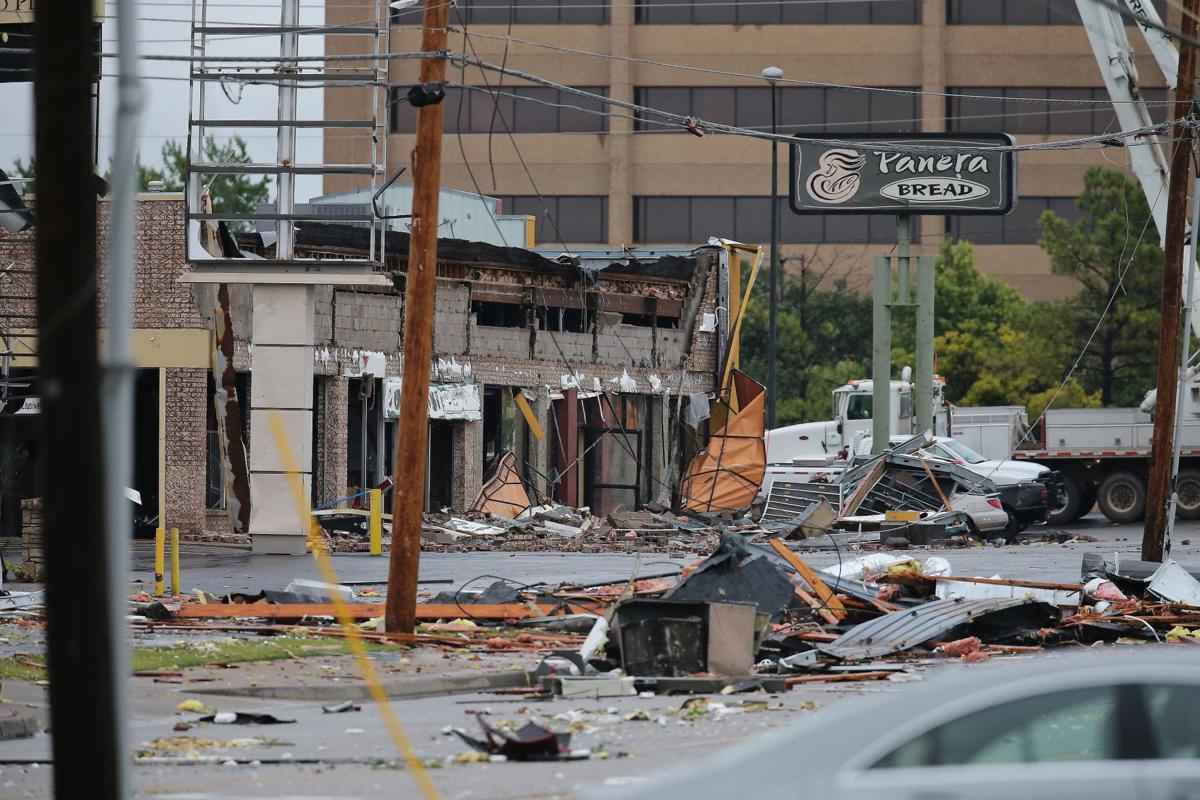 Damage left by a severe storm near 41st and Hudson on Aug. 6, 2017. TOM GILBERT/Tulsa World 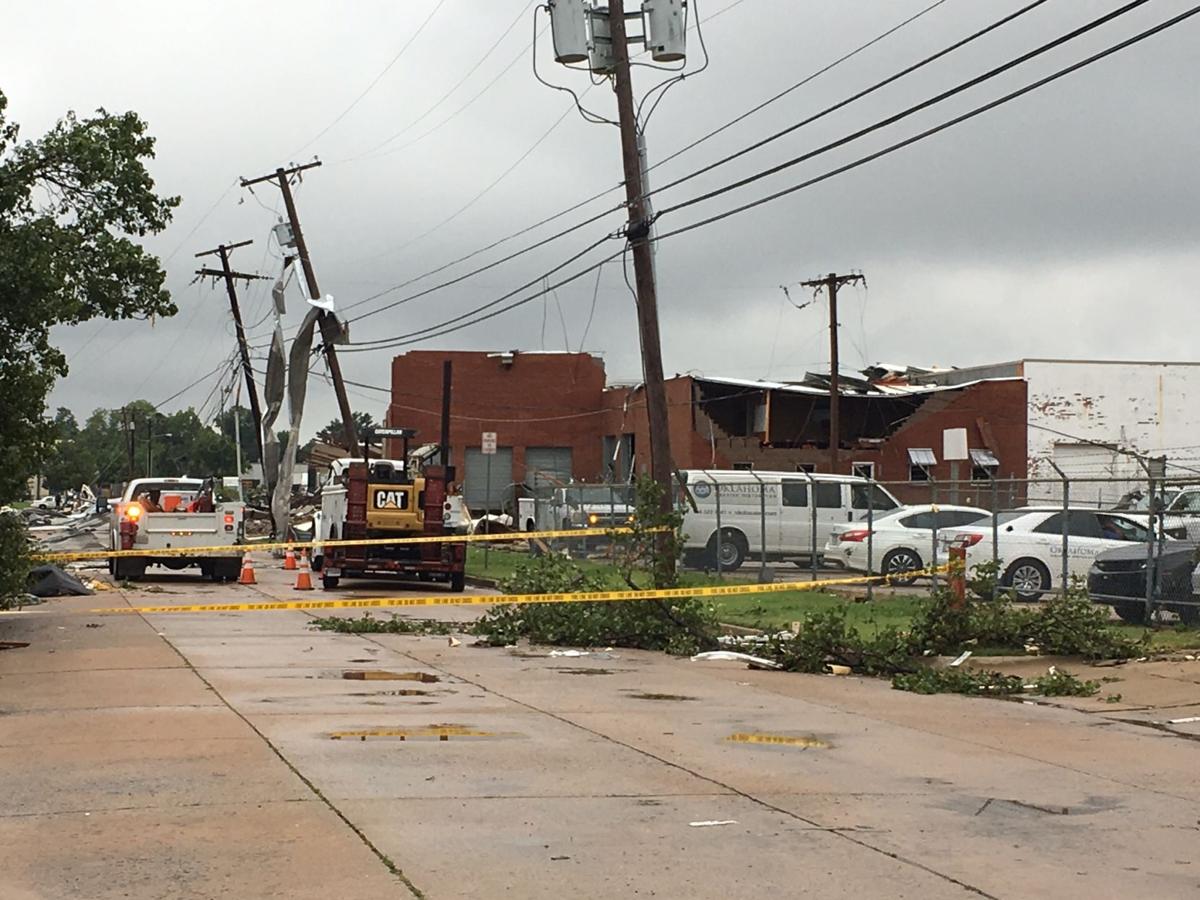 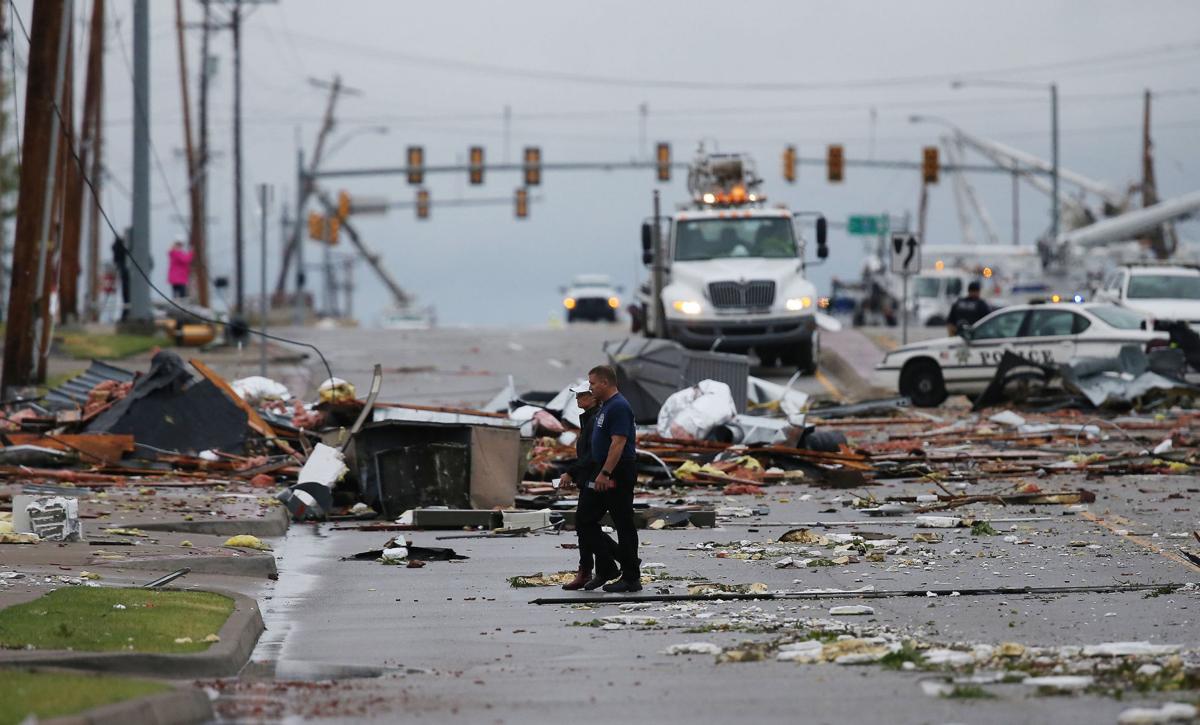 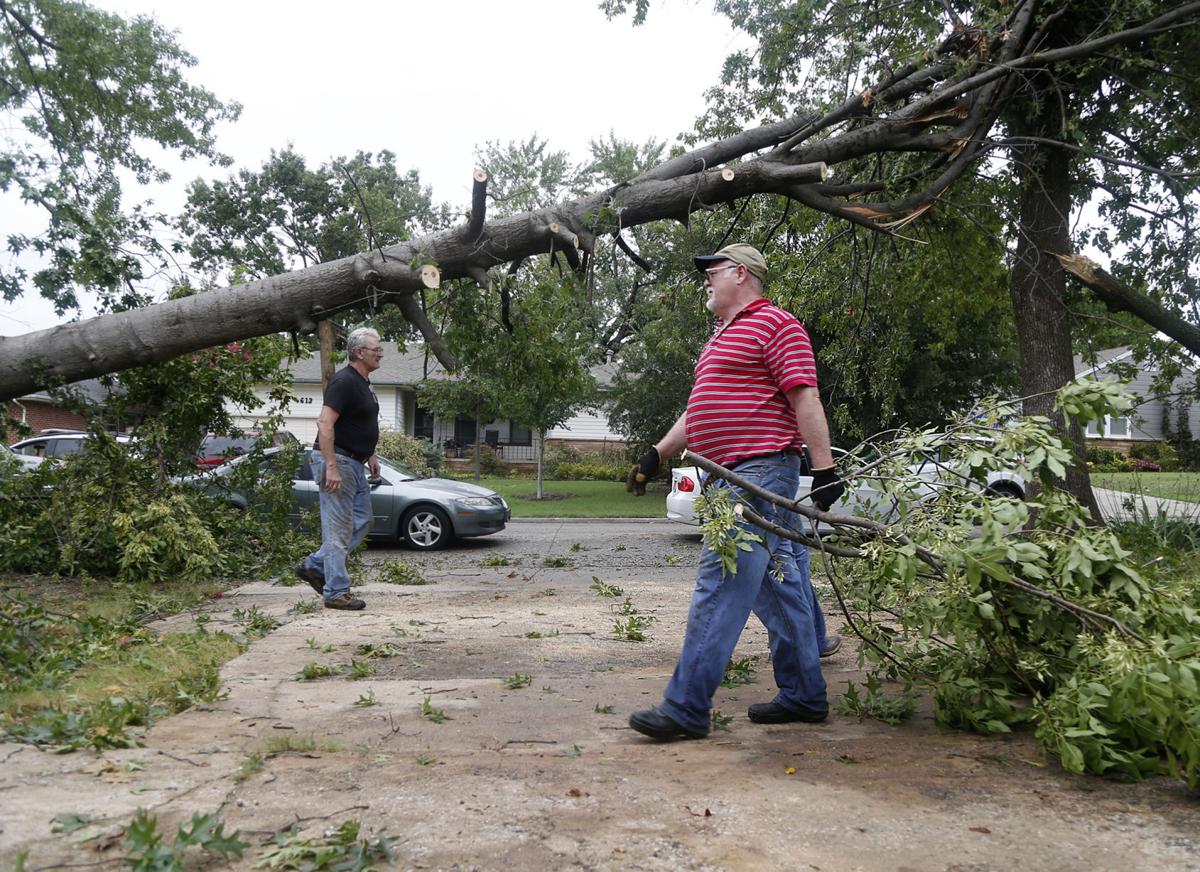 Update (6:36 p.m.): City streets in the area of 41st and 51st streets between Memorial Drive and Sheridan Road, and 41st Street between Yale Avenue and Sheridan Road, will remain closed overnight Sunday and into Monday after a tornado passed through the area.

The city announced the closure in a press release Sunday evening, adding motorists should avoid the area during the Monday morning commute.

City crews should have most streets cleared of downed trees and debris by 10 p.m., except for those affected by downed power lines and not under city control, the statement read.

An early-morning tornado injured at least 30 people and caused extensive damage in parts of Tulsa on Sunday.

The National Weather Service on Sunday confirmed an EF2 tornado — with winds of 111-135 mph — touched down in midtown Tulsa.

Most of those hurt had lacerations and other injuries, but most were treated and released, a hospital spokeswoman said.

No deaths were reported.

The area that received the most damage is 41st to 51st streets from Harvard to Mingo. The shopping corridor at 41st and Yale is closed currently. The city of Tulsa has closed 41st-51st streets between Memorial and Sheridan, and 41st from Yale to Sheridan.

Deputy Mayor Michael Junk, who is acting mayor while Mayor G.T. Bynum is out of state, said the emergency operations center was activated about 1:25 a.m.

Junk said the storm's severity apparently caught the National Weather Service off guard and no tornado sirens were activated.

Junk said he and other city leaders left the emergency operations center about 7 a.m. as the sun came up to survey damage.

"Most of the residential stuff is isolated to trees and roof damage," Junk said. "It's gets a little more intense around commercial properties around 41st and Yale and 41st to 51st on Sheridan."

Junk said he plans to meet with city staff in the next few hours to discuss a plan for tree removal and other needed response.

Of those, only three people remained hospitalized late Sunday morning, none of whom were in critical condition, she said.

Most patients were treated and released, she said.

"Our team did a great job triaging," she said.

A spokeswoman at St. John Medical Center would not say if or how many patients were treated there for storm-related injuries.

EMSA transported 13 patients with storm-related injuries to multiple Tulsa hospitals, a spokeswoman said. Eight came from a TGI Fridays near 41st and Yale, while four came from a nearby Whataburger.

Businesses and homes reported extensive damage and as many as 15,000 customers were without power in the Tulsa area due to downed power lines. The number had been reduced to about 3,400 customers as of about noon Sunday, according to AEP-PSO.

The National Weather Service in Tulsa sent a team to survey damage in the midtown area and to confirm if a tornado did touch down and its intensity, said meteorologist Brad McGavock. Results of the survey showing the tornado's path will be available either late Sunday or early Monday, he said.

Many homeowners near Whiteside Park, just six blocks west of Promenade Mall, slept through the storm, waking up Sunday morning to find their neighborhood in shambles.

Fallen trees are blocking roads and some landed on cars or rooftops, with downed power lines also making some streets impassable.

The neighborhood lost power before the tornado touched down, leaving a lot of people unaware of the storm warnings, said resident Rachel Anderson.

"A lot of people, like me, went back to sleep and thought everything was OK," she said. "But they're waking up this morning to realize that everything is not OK."

A neighbor's tree collapsed on top of Sam Yell's cars, an SUV and Honda Civic parked his driveway near Whiteside Park.

A storm alert popped up on his phone, but only after the damage had already been done, he said.

"The lights flickered and then the tree came down," he said. "The house seems to be OK."

Promenade Mall, at the intersection of 41st and Yale, received structural and roof damage, though owner Mike Kohan doesn't believe there was much product loss.

The storm left the mall without power, meaning they will be closed for the last day of Okahoma's tax-free weekend. Kohan said the mall stands to lose thousands of dollars in sales.

“We missed a lot of tornadoes, but this time, I guess, we’re not lucky enough,” he said.

The mall will likely be closed until Tuesday.

The storm impacted the BOK Financial operations center near 41st Street and Sheridan, downing their online bank system, automated telephone service and mobile app, according to a statement they released Sunday.

Crews are working to restore the services. Most ATMs should still be operational, the statement read.

Store employees and volunteers evacuated thousands of animals — including many hundreds of fish alone — from a Petco near 41st Street and Yale Avenue, where roof damage was causing major flooding inside the building.

No animals were injured, however, and all will be taken to safety at other Petco locations, said manager Jenny Wells.

"It could have been a lot worse," she said.

Two bakers were inside Panera Bread when the storm hit, but escaped uninjured.

"One was in the restroom and one was sitting down to eat in the Cafe on his lunch break," said Erin Barnhart, community relations for Panera's Tulsa locations.

The baking had been done for the night so employees took baked goods to the police officers and PSO workers.

The employees hung out in the cafe until firefighters came to get them.

"We were devastated, unfortunately," said Linda Waddle, the manager of Cartec automotive services near 41st Street and Interstate 44. The storm smashed the entire south side of the business, along with the adjacent Panera Bread restaurant.

No one was inside Cartec when the storm hit, Waddle said, but the damage left her shaken.

"It's amazing, really," she said. "A lot worse than I expected."

The storm also blew half the roof off a Whataburger in the area, in addition to some siding. A nearby Chipotle was also hit, and an overturned car with a busted windshield sat in its parking lot Sunday morning.

Remington Tower, an 18-story building located near 41st Street and Skelly Drive, was severely damaged by the store, and as of Sunday morning was without power and considered unstable, officials said.

Damage reports, however, began several minutes before the warning was issued, as the storm rapidly intensified as it crossed the metro area.

The weather conditions "made things REAL interesting in the Tulsa metro earlier tonight, in the form of at least one probably tornado," according to a 4:14 a.m. National Weather Service discussion.

Traffic lights are down at 41st Street and Yale Avenue and at 46th Street and Memorial Road.

Interstate 44 at 41st Street and Sheridan Road was closed Sunday morning because of debris but has since reopened.

Why weren't the sirens activated?

No sirens were sounded in Tulsa during an early-Sunday morning suspected tornado because of its sudden appearance and rate of movement out of Tulsa.

"The National Weather Service issues a tornado warning at 1:25 a.m.," according to a statement from the city of Tulsa. "This particular storm spun up at such a quick rate between scans of the radar and by the time the NWS issued the warning, the storm was crossing into Broken Arrow."

By the time Tulsa emergency crews could have activated the sirens, the storm was already passing into Broken Arrow, which was then warned by Tulsa Area Emergency Management Agency Director Roger Joliff, according to the statement.

"The TAEMA director called BA emergency management director and insured they had the same information so they could activate the BA sirens," according to the release.

Rolsch Cooper talks on the phone after surveying damage at his workplace near 41st Street and Sheridan Road in Tulsa, Okla., on Sunday, August 6, 2017. MATT BARNARD/Tulsa World

Damage left by a severe storm near 41st and Hudson on Aug. 6, 2017. TOM GILBERT/Tulsa World