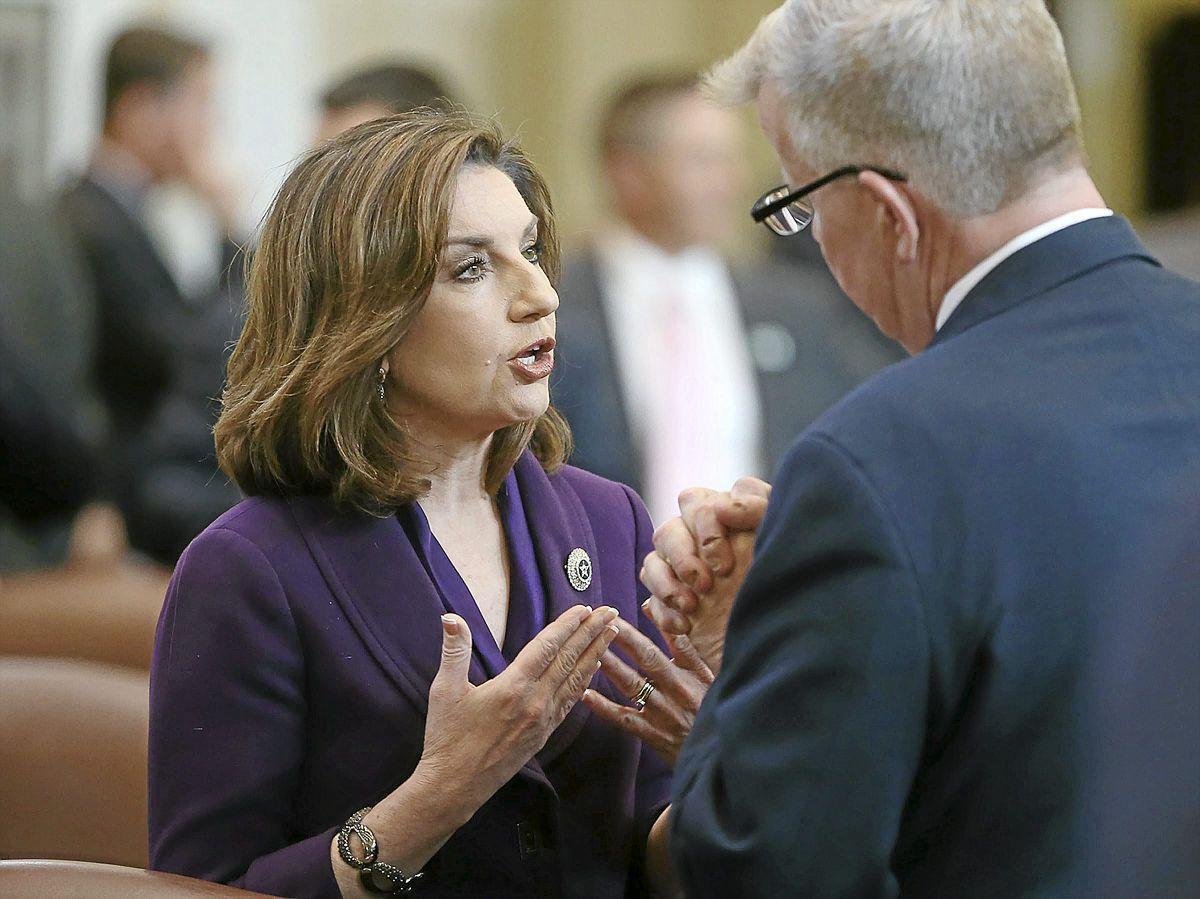 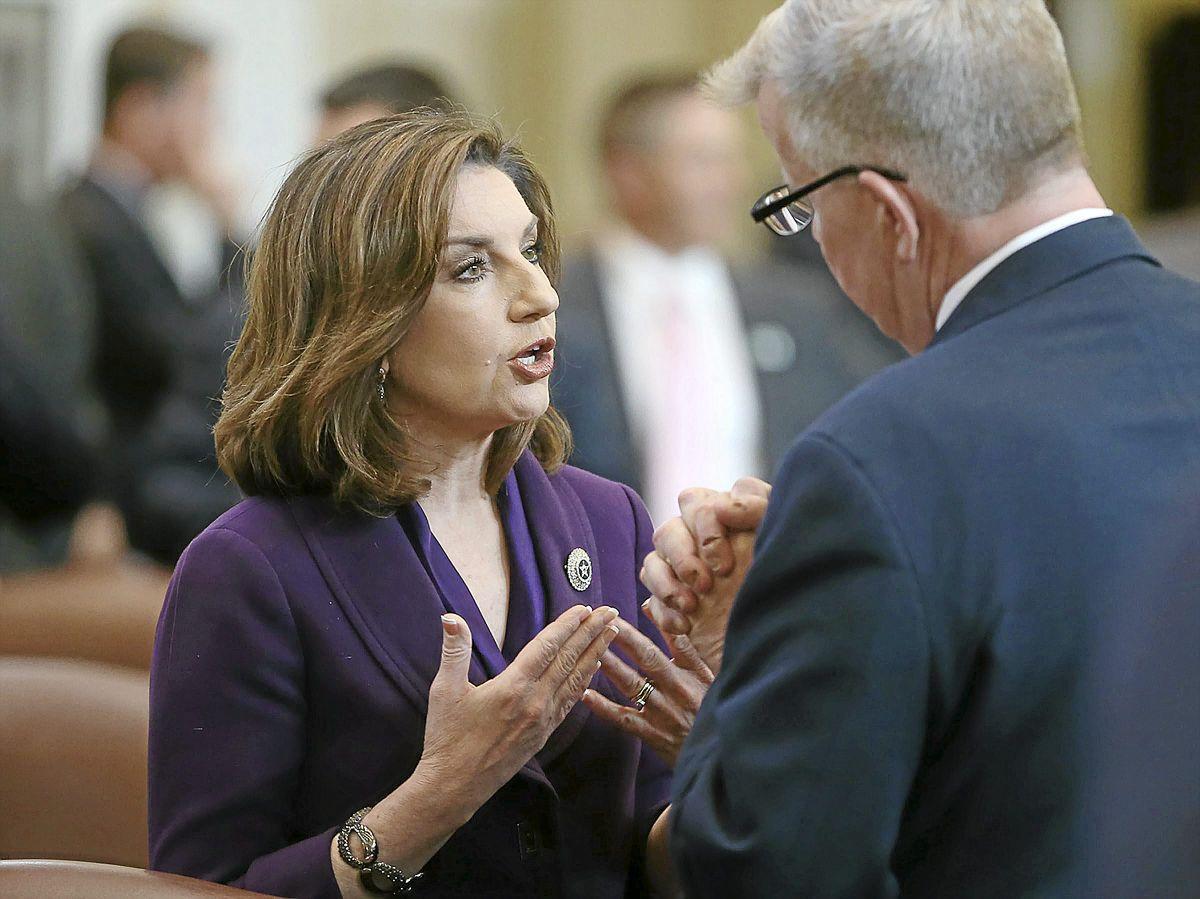 State Superintendent Joy Hofmeister speaks with a legislator during the last legislative session.

Just days before they could clear their final hurdle, proposed new academic standards for Oklahoma public schools are facing threats from inside the state and out.

“As I have said in recent days, people from outside our state are swooping in at the eleventh hour to try politicizing Oklahoma’s standards. This report is evidence of that. We cannot let them,” she told the Tulsa World in a written statement.

It has been seven weeks since Hofmeister delivered the proposed standards at a joint session of both houses of the Legislature.

The development of new academic standards in reading and math is easily Hofmeister’s biggest policy issue lingering from her to-do list for her first year in office.

By law, both the Oklahoma State Senate and House of Representatives have until Wednesday to approve or disapprove any portion of the newly written standards. If no action is taken, the standards would be automatically approved.

And earlier in the week, two of the state standards experts invited to speak to the Oklahoma Standards Setting Steering Committee in early 2015 as the writing process was being launched returned and spoke critically of the outcome.

As reported by eCapitol news service, Larry Gray, mathematics professor at the University of Minnesota, and Sandra Stotsky, research professor emerita of education reform at the University of Arkansas, told Oklahoma legislators the proposed standards suffer from a lack of specificity, lack of examples in both math and reading materials and vague language.

Gray was a member of the writing team that developed new math standards for Minnesota in 2003 and then revised them in 2007, and the standards have resulted in marked improvements in student achievement.

Stotsky is credited with developing one of the country’s strongest sets of academic standards for K-12 education during her tenure as senior associate commissioner in the Massachusetts Department of Education from 1999-2003.

They appeared at a Tuesday legislative forum hosted by the Heartland Institute, a Chicago think tank with a focus on state policy.

Oklahoma lawmakers initially signed on with more than 40 other states for the Common Core, a new set of common academic benchmarks that all students should meet to be considered ready for the job market or college.

But in 2014, the Legislature did an about-face and repealed the Common Core and mandated that Oklahoma go it alone and develop its own unique new standards.

That yearlong process was concluded in December. In January, the Oklahoma Regents for Higher Education certified the proposed Oklahoma Academic Standards as “college and career-ready,” and the state Board of Education submitted them to the Legislature.

Achieve — the nonpartisan, nonprofit education reform organization that helped develop the Common Core state standards — has evaluated academic standards for more than 25 states and compared standards in 15 countries over the past 15 years. It measures standards according to six criteria: rigor, focus, coherence, specificity, clarity and accessibility, and measurability.

In its new report, Achieve compared the final version of Oklahoma’s proposed new academic standards to the Common Core standards.

“In both content areas Oklahoma’s new standards fail to serve students, teachers, or parents well. The standards cover a lot of content, but with very little depth; a phenomena sometimes referred to as ‘a mile wide and an inch deep’ in standards language,” stated Sandy Boyd, chief operating officer at Achieve.

The organization’s analysis found that Oklahoma’s proposed English and language arts “will likely cause confusion for Oklahoma’s teachers because they aren’t sufficiently clear, specific, and/or consistent enough to guide their teaching.” As for math, Achieve declared “key concepts are missing across grades and the standards do not provide an adequate foundation in early grades to ensure students are prepared to study advanced math in high school.”

Asked if someone in state government or a third party requested the Achieve analysis, Boyd, the organization’s chief operating officer, said “no.”

“Sometimes we have a specific request from a state like when Gov. (Mike) Pence asked us to review the Indiana standards, and sometimes a third party will ask, but sometimes we decide to do it without a request, which was the case most recently with the South Carolina and the Oklahoma standards. We try to stay on top of what all states are doing,” Boyd said.

Phyllis Hudecki, Gov. Mary Fallin’s former secretary of education, was a career educator who went on to hold positions with state departments of education in Iowa, Missouri and Massachusetts and then the U.S. Department of Education before returning to her home state of Oklahoma.

She is currently executive director of the Oklahoma Business and Education Coalition, an organization supported by CEOs from dozens of corporations across Oklahoma interested in education policy related to state standards, tests and school accountability.

OBEC did not join the dozens of organizations that endorsed the proposed standards when they were completed in December, instead choosing to remain silent.

Asked to comment on the significance of Achieve’s new report, Hudecki responded that when it comes to the analysis of academic standards, “They are widely viewed as setting the ‘gold standard.’ ”

She added, “Achieve was created over 20 years ago to be a resource to assist states in the early stages of developing their standards and has since worked extensively with all aspects of state standards development and analysis. They have been used extensively by states, including Oklahoma, to benchmark, analyze or compare standards, to the best among states or nations, providing constructive feedback, and consultation.”

Asked why OBEC had chosen not to endorse the proposed new standards, Hudecki said her group was most concerned with how they would stack up against other states and nations.

“We know and appreciate the state put tremendous effort into the work, but from the beginning of the process they were working with few resources and a compressed timeline,” she said. “Make no mistake about it, our state education professionals can create excellent standards. Our students can achieve at high levels and compete with anybody anywhere if they are given the opportunity and resources.

Hofmeister said it’s worth noting that the proposed standards have been reviewed and endorsed by Frank Wang, president at Oklahoma School of Science and Mathematics; Oklahoma State University; Oklahoma Writing Project at the University of Oklahoma; Oklahoma Council of Teachers of Math; Oklahoma Department of Commerce, and the Southern Regional Education Board.

“I am proud of the new standards we have developed as a state,” she said. “These are Oklahoma standards, written by scores of Oklahoma educators and subject content experts, and endorsed by our local school districts and our state’s institutions of higher education.”

At their meeting in January, state board members noted all of the official endorsements that had poured in from a broad spectrum of educators and advocacy groups.

Hofmeister seemed to allude to OBEC’s concerns at the conclusion of that meeting, when asked if any groups had held off on endorsing the proposals.

She said then that while some representatives of the business community have officially supported the standards, others had expressed concern that the new math standards don’t go any further than the state’s minimum requirement of Algebra II, into advanced courses such as trigonometry and calculus.

One individual with a closeup view of the two-year-long shakeup in the state’s academic standards said he is incredulous and suspicious about the latest developments.

“In repealing Common Core, we said we don’t want California standards, we don’t want Massachusetts standards, we don’t want Minnesota standards. We want Oklahoma standards with Oklahoma expertise,” fifth-year state Board of Education member Lee Baxter said, referring to the Legislature. “We’ve had a year to participate and give input and now at the 23rd hour, all of a sudden we’ve got legislators who are not teachers saying they need to be advised by someone outside the state. It is counterintuitive, disingenuous.

“And two days before, we get this report from a very suspect organization — the architect of Common Core, and we rejected Common Core.

“The Legislature needs to approve the standards. Sometimes perfect can be the complete enemy of good enough or good enough for right now.”

Tulsa Public Schools is seeking community feedback about the mascots and logos used by Central and Webster middle and high schools. Earlier this year, the district's Indian Education Parent Committee requested that both campuses drop their Indigenous-themed mascots.

Education notebook: TPS had 101 confirmed COVID cases as of Friday

Reading Partners is expanding this fall to include 200 students across four Union elementary schools: Roy Clark, Grove, McAuliffe and Peters.

Officials with the Oklahoma State Department of Education and Oklahoma Department of Human Services confirmed that electronic P-EBT payments for the 2020-2021 school year have started to go out to eligible families across the state.

State Superintendent Joy Hofmeister speaks with a legislator during the last legislative session.