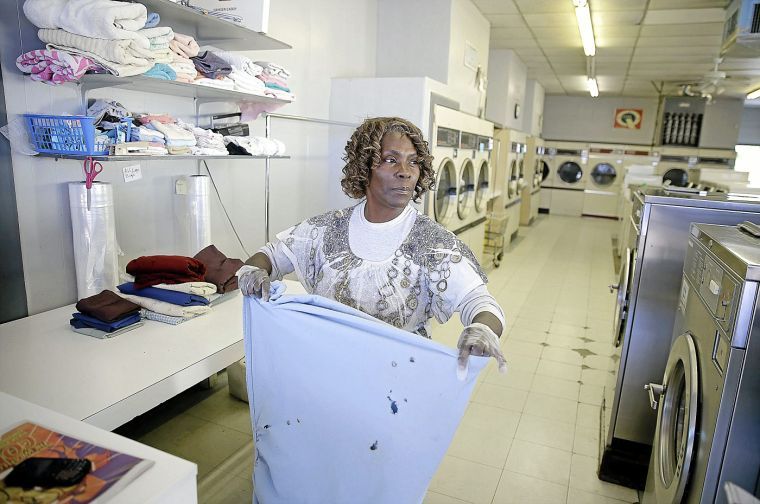 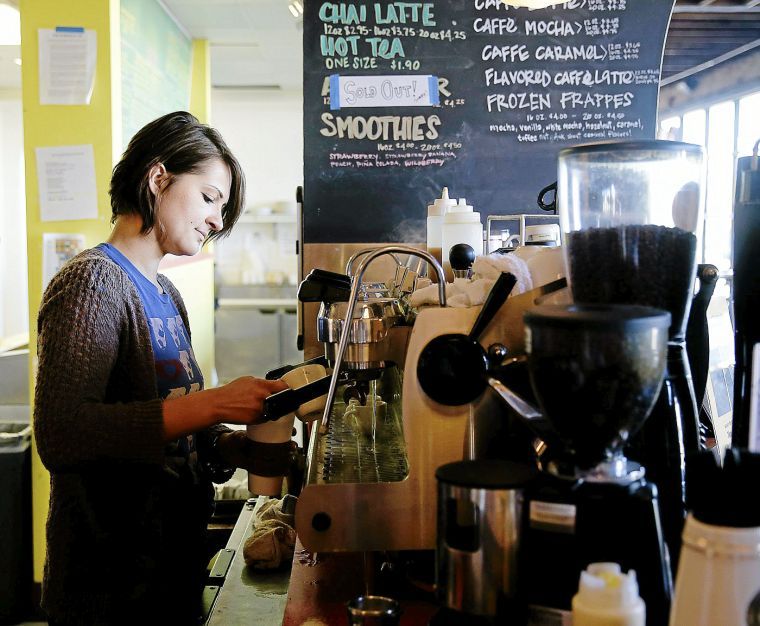 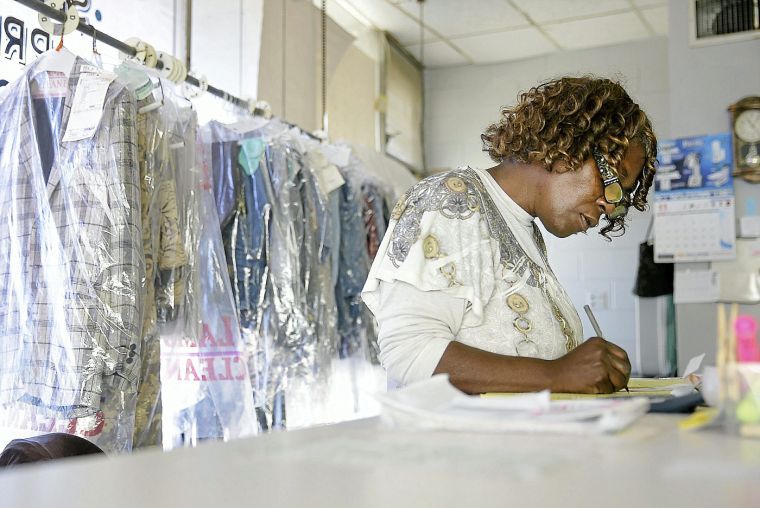 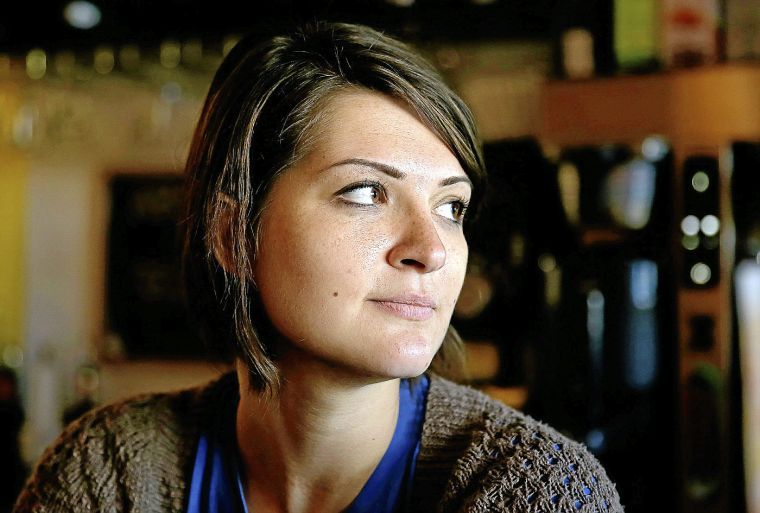 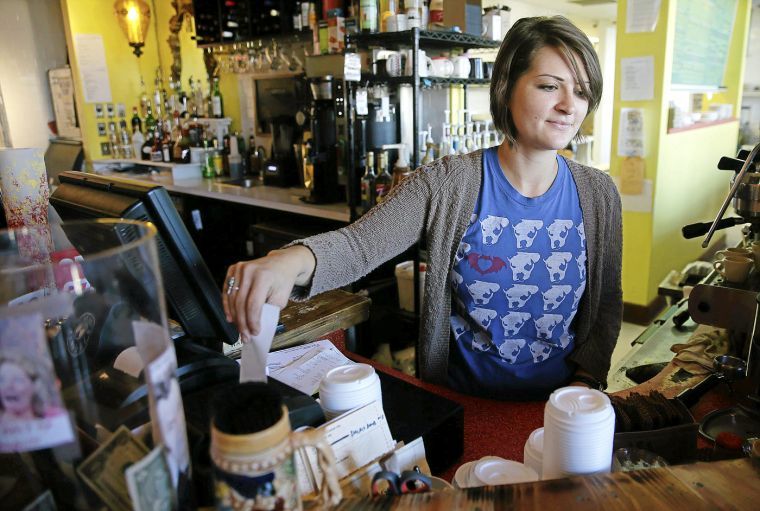 Lori Pearson spent a year working at Whataburger before leaving a few months ago to take a job cleaning clothes at Blue Monday Coin Laundry and Dry Cleaners.

Both jobs in Tulsa were for minimum wage. Neither one came with insurance or benefits, she said, while sorting customers’ soiled laundry.

“I love my job, I really do,” Pearson said. “I have a wonderful boss. But it would be nice to get paid more than minimum wage.”

Before Pearson, 52, moved home to Tulsa a few years ago to be closer to her adult children and grandchildren, she lived and worked in Kansas City for DST Output, a communications company. She sorted mail and worked her way up there from $7.50 to $15 per hour, plus benefits. But the company closed her department.

Her 30-year-old daughter has two sets of twins, so Pearson moved home to help with her grandchildren and be closer to all her children.

In her job searching, she said, it seemed as though Kansas City jobs paid better than in Tulsa. A boost from $7.25 hourly would be nice, she said.

“I would love for them to do that (in Oklahoma). Why don’t they?” Pearson asked.

Pearson works four days a week and brings home about $175, getting paid every Friday.

“Some weeks, it pays better than others,” she said.

Forty hours a week at Oklahoma’s minimum wage earns $290, before state and federal income taxes, Social Security and Medicare deductions. Those expenses reduce a 40-hour-week minimum wage paycheck to about $234.

Workers like Pearson must live on less than $1,000 per month for insurance, housing, groceries, utilities and transportation.

Tim O’Connor, president of the Central Oklahoma Labor Federation, a unit of the AFL-CIO, led an effort earlier this year to launch an initiative petition aimed allowing voters in Oklahoma City to decide whether to increase the minimum hourly wage from $7.25 to $10.10.

“It’s unfortunate for us that our state Legislature and newly re-elected governor chose to squash any efforts to raise the minimum,” O’Connor said.

His effort was torpedoed in the 2014 legislative session by state lawmakers and Gov. Mary Fallin, who quickly passed a bill forbidding cities and counties from increasing the minimum wage beyond the federal minimum. The bill also bans local policies on vacation and sick days.

Sen. Dan Newberry, R-Tulsa, who co-authored that bill, said it may make sense for some states to increase their minimum wage rates.

“If the states are making the decision to increase those wages that is certainly within their purview,” Newberry said.

The move by Arkansas to increase the minimum wage rate was one that “they thought was best for their state,” but could impact Oklahoma, too, Newberry said.

“I could certainly see where you might have a migration of jobs one way or the other,” Newberry said.

Newberry said he opposed any increases in Oklahoma’s minimum wage at this time.

“In Oklahoma, we are in the process of coming out some pretty hefty hard times and I wouldn’t want to raise the cost of living in Oklahoma arbitrarily without having done a proper analysis.”

“The biggest concern about minimum wage and minimum wage hikes is they end up often hurting people that need the help the most,” Small said.

Rather, Small said states should look at other ways to help workers.

“The well-being of people would be far better off to focus on how can we use competition and innovation to drive down the costs of things through transparency which is desperately needed for health care, as opposed to focusing on really token increases, which is really what most of those bills are,” Small said.

O’Connor disagreed that minimum wage increases would lead to a displacement of workers, saying he hasn’t seen statistics that support those assertions. State leaders here should take notice of the decisions Tuesday by voters in other states, he said.

“I would hope Mary Fallin and the leadership would take a strong look,” O’Connor said. “If they want to do the right thing for Oklahomans, then at the minimum they should let people vote on it.”

Missy Chenoweth, 28, earns minimum wage plus tips serving coffee and cocktails at the Phoenix in Tulsa.

She said she’s disappointed that Oklahoma voters didn’t get to consider raising wages like their neighbors in Arkansas and Nebraska.

“Maybe eventually that will influence voters here,” Chenoweth said. “Because it’s really hard to get by.”

Without the tips she earns, she wouldn’t be able to pay her bills.

“It makes a huge difference,” she said.

She has a 9-year-old son she supports, with the aid of child support from his father.

Chenoweth made slightly more money working as a liquor store clerk before, but her job at the Phoenix, near 6th Street and Peoria Avenue, has better hours for someone raising a child in school, she said. Years ago, she took classes at Tulsa Community College and Northeastern State University, but had to stop school and start working because she couldn’t afford to continue.

When her son is older, she plans to go back to school and finish her degree.

Currently, she’s struggling to afford health insurance for herself. She falls into the gap of folks who don’t qualify for federal subsidies because they earn slightly too much. The cheapest quote she received is $214 per month.

“If I didn’t have help, there would be no way to get by financially,” Chenoweth said. “I know not everyone is that lucky.”

The measures head to Gov. Kevin Stitt for consideration.

Among the bills passed was one requested by the Tulsa County Sheriff's Office. Senate Bill 87, by Sen. John Haste, R-Broken Arrow, would authorize counties to establish diversion programs for people in possession of controlled dangerous substances.