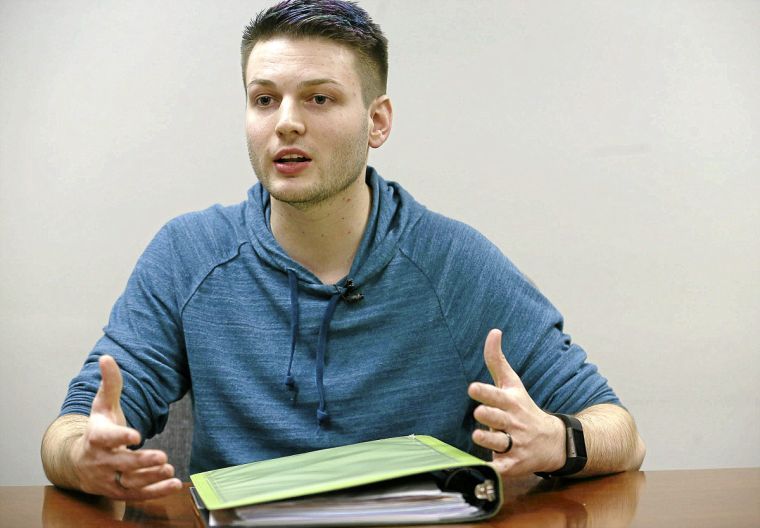 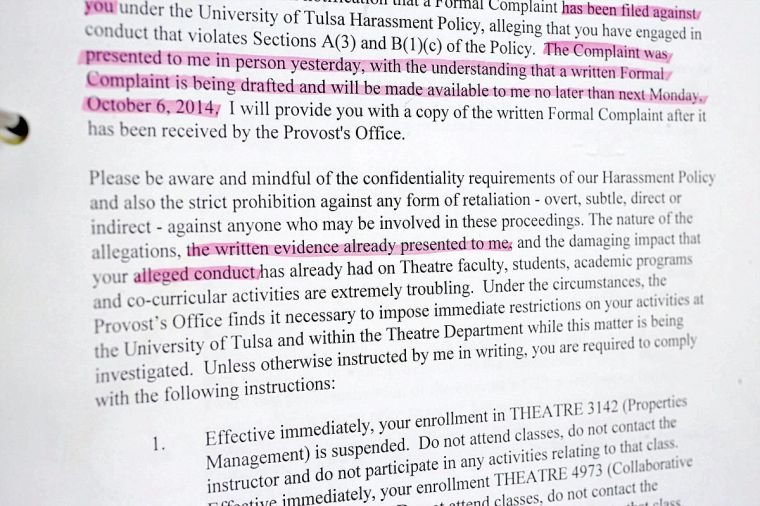 A letter sent to student George 'Trey' Barnett III from the University of Tulsa after messages allegedly posted by his then-fiance, now husband, Christopher Mangum appeared on his Facebook page in 2014. JAMES GIBBARD/Tulsa World file 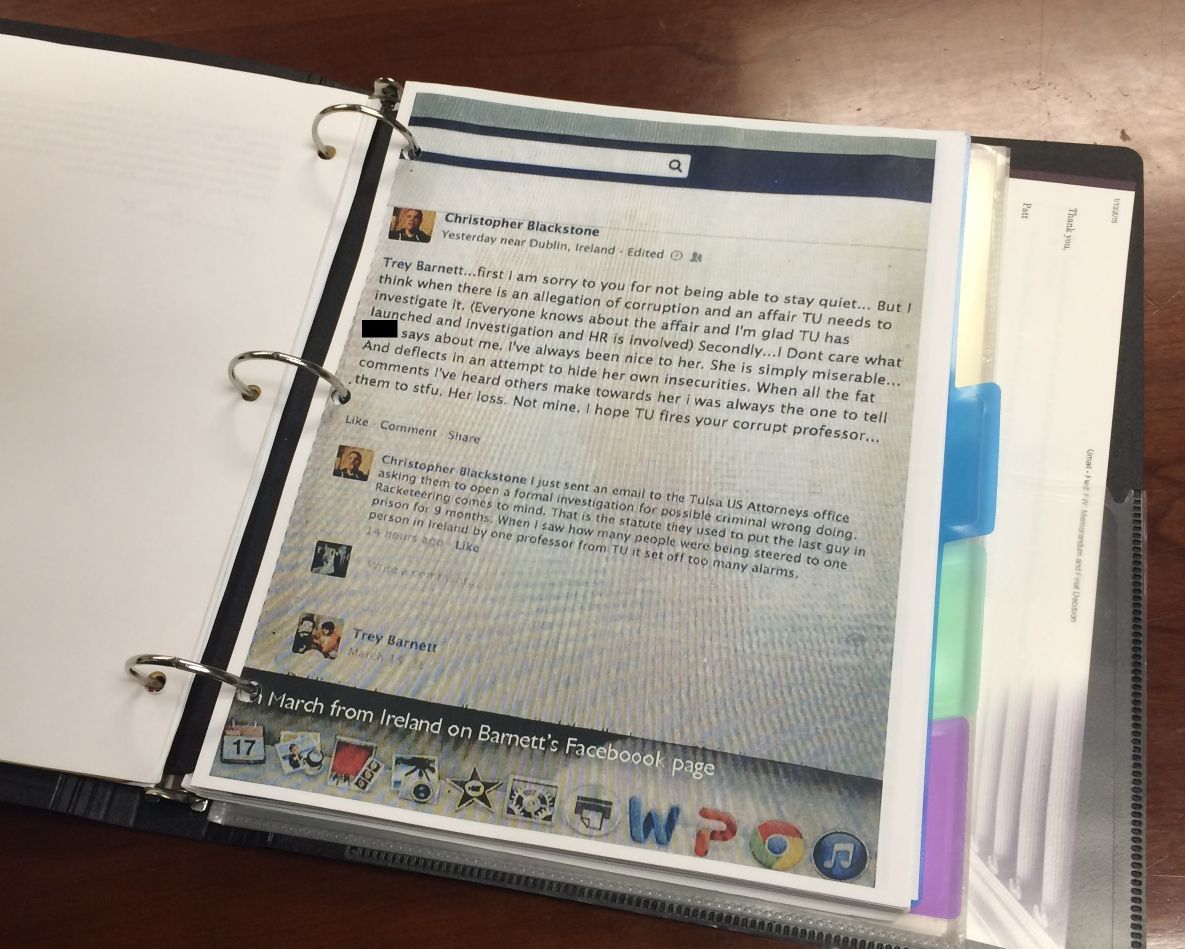 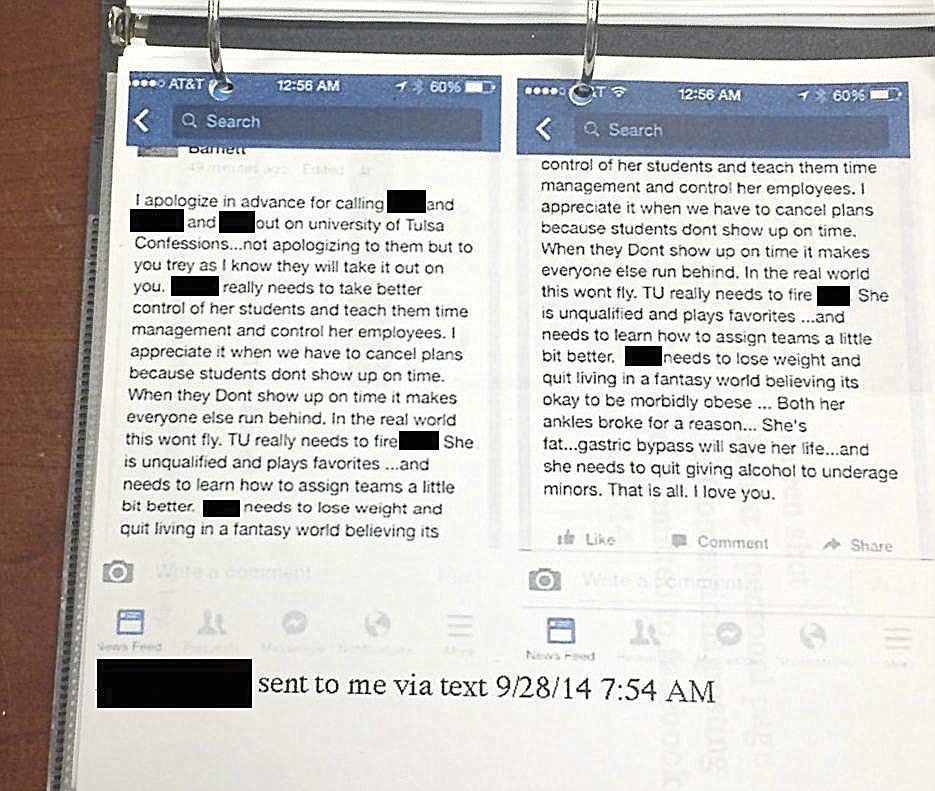 A letter sent to student George 'Trey' Barnett III from the University of Tulsa after messages allegedly posted by his then-fiance, now husband, Christopher Mangum appeared on his Facebook page in 2014. JAMES GIBBARD/Tulsa World file

A former University of Tulsa student who was suspended in 2014 for an alleged violation of the school’s harassment policy has filed a lawsuit claiming his dismissal was unfair and was a breach of the institution’s commitment to due process for students accused of misconduct.

George “Trey” Barnett III, who was studying theater at TU, was suspended from Oct. 24, 2014, until Jan. 1, 2016, after another student and two professors complained about a series of Facebook posts created by Barnett’s husband, Christopher Mangum, who was his fiance at the time and was not a student.

Barnett’s lawsuit alleges negligence on the part of the university in large part because school officials refused to allow him a hearing to defend himself. It asks for more than $75,000 in damages.

The Tulsa World obtained copies of the Facebook posts at issue, which were written from March to September 2014. They allege one professor was having an affair and comment on a theater student’s weight, stating the student needed to “quit living in a fantasy world believing it’s OK to be morbidly obese.”

The World also received a copy of the school’s decision letter, which indicated Barnett bears responsibility for Mangum’s posts despite not having written them himself. The TU decision says those affected were entitled to “immediate relief” from Barnett’s “defamatory, demeaning, bullying” attacks, which “undermined morale” and “unreasonably interfered” with the working environment.

Mangum submitted an affidavit taking ownership of the posts, which an administrator deemed “not credible,” despite not having interviewed him about the posts, according to the lawsuit.

The disciplinary decision also said a professor had in the past warned Barnett multiple times about his fiance’s behavior.

The suspension drew outrage from First Amendment advocacy groups and reporters at TU’s student newspaper who covered the situation, who said the school was punishing someone for another person’s legally protected speech.

The student journalists’ reporting prompted a campus-wide email from TU President Steadman Upham last February, who said hearings are not part of the process when investigating harassment complaints and that such proceedings are bound by confidentiality.

“It feels like there’s a strong vendetta against me, and I don’t know what I did wrong to hurt these people,” Barnett told the Tulsa World last year. “My (faculty) mentor and the person I trusted the most … she decided she was done with me. So she wrote a complaint saying that we (Barnett and Mangum) were working in cahoots and that I had done all this damage to the department.”

Barnett unsuccessfully appealed the decision, which became final Jan. 9, 2015, and his transcript states he was suspended for misconduct. In addition to his suspension, Barnett — who was set to graduate by December 2014 — is barred from completing the program’s graduation requirements permanently or transferring theater credits from elsewhere to TU, according to the disciplinary ruling.

“Upon information and belief, since (Senior Vice Provost Winona) Tanaka had no recourse against non-student Mangum and his comments about how she ran the theater department, (Professor Susan) Barrett decided to punish Barnett by accusing him of the harassment instead,” the lawsuit states. “Barrett’s written complaint contained several misrepresentations and false statements which could be easily corroborated or investigated.”

Ari Cohn, senior program officer for legal and public advocacy for the Foundation for Individual Rights in Education, said it was “unconscionable” that TU administrators would impose such a punishment while also trying to prevent him (Barnett) from discussing the case with his fiance.

The Foundation for Individual Rights in Education, a nonprofit organization advocating for First Amendment rights, sent a letter expressing concerns about Trey Barnett’s case to TU officials, which Cohn said never received a response. He said the group will watch the case “very closely” as it moves through the court system.

“This whole case has been marked by a series of conjecture and assumptions that boggle the mind,” Cohn said. “Tulsa never proved that Trey Barnett posted any of them (on Facebook). …

“The suspension is very clearly punitive. The disciplinary process is supposed to be educational, but that got tossed out the window when you examine what the sanction actually is. It’s vindictive, pure and simple.”

A TU spokeswoman said Monday the school does not comment on pending litigation.