Wrestling For A Cause: Pro wrestling events provide financial help, escapism for sick children
Share this
Return to homepage × 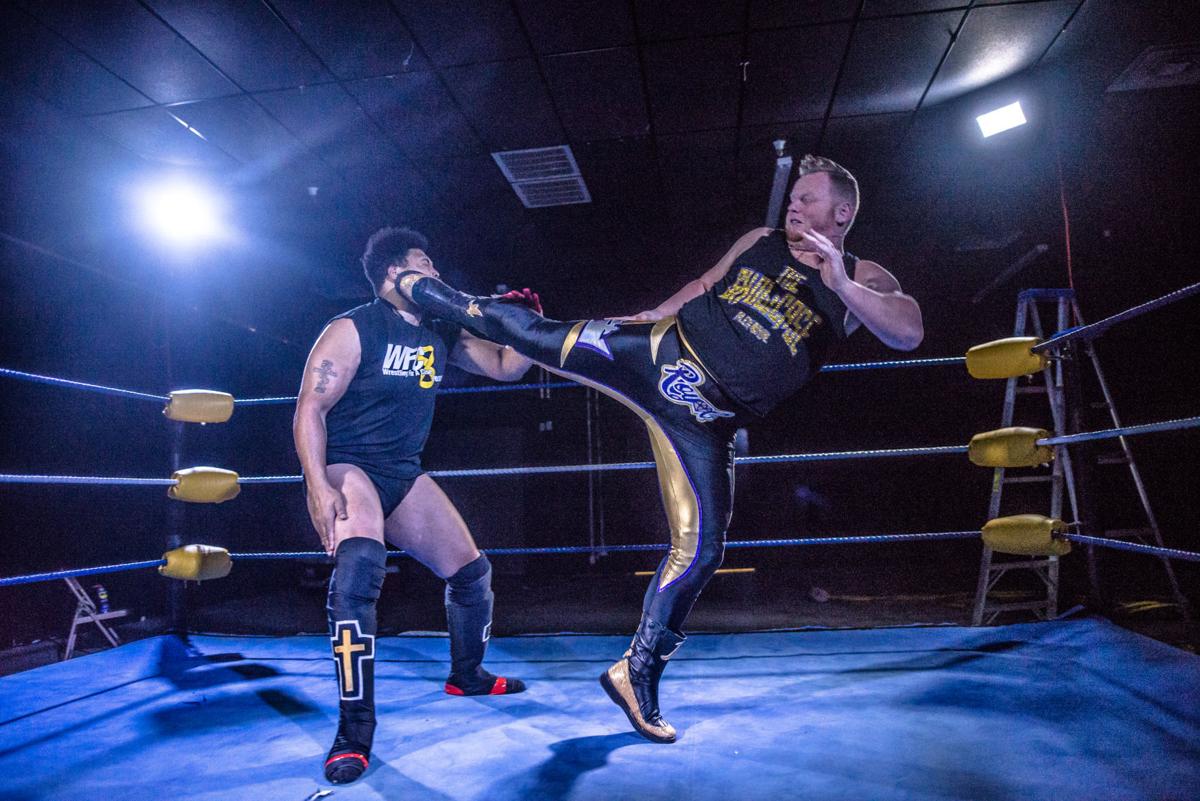 Alex Royal (right) practices a move with Mr. Nasty at Perfect Practice Athletic Center. It will be the site of a benefit wrestling event Saturday, Jan. 18. JOSEPH RUSHMORE/for the Tulsa World 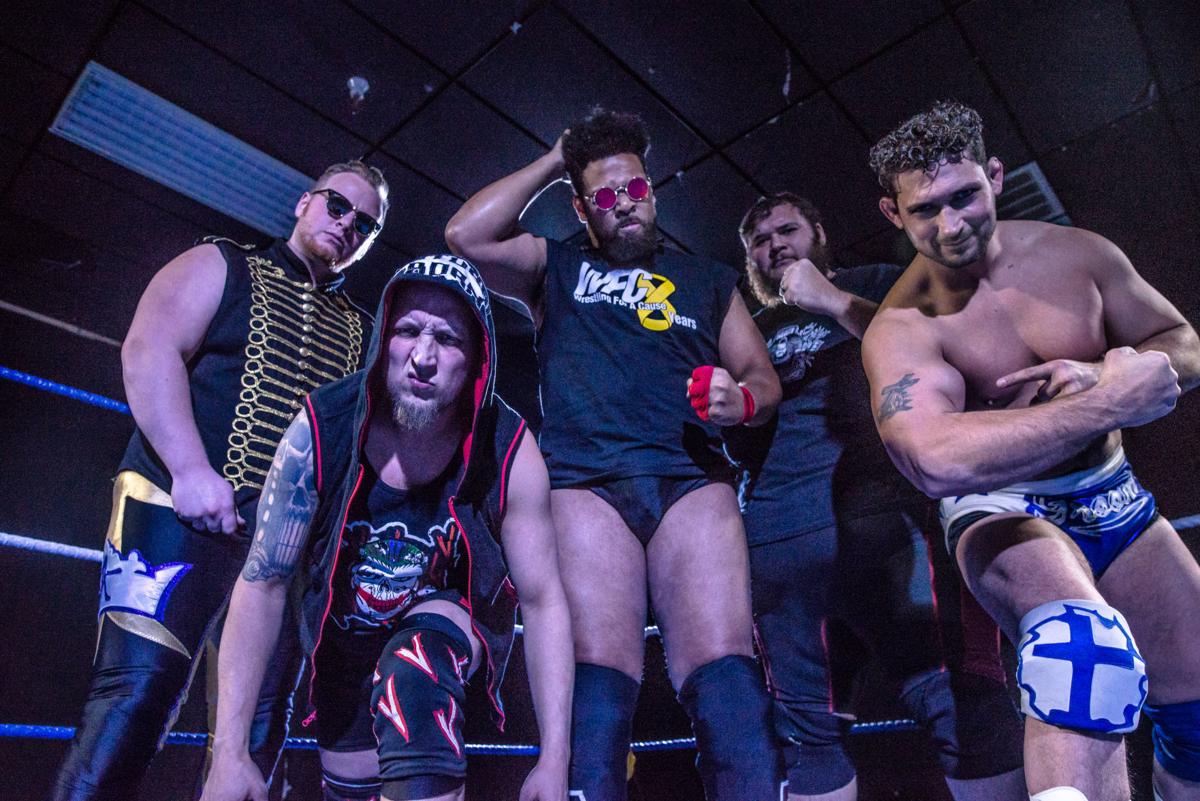 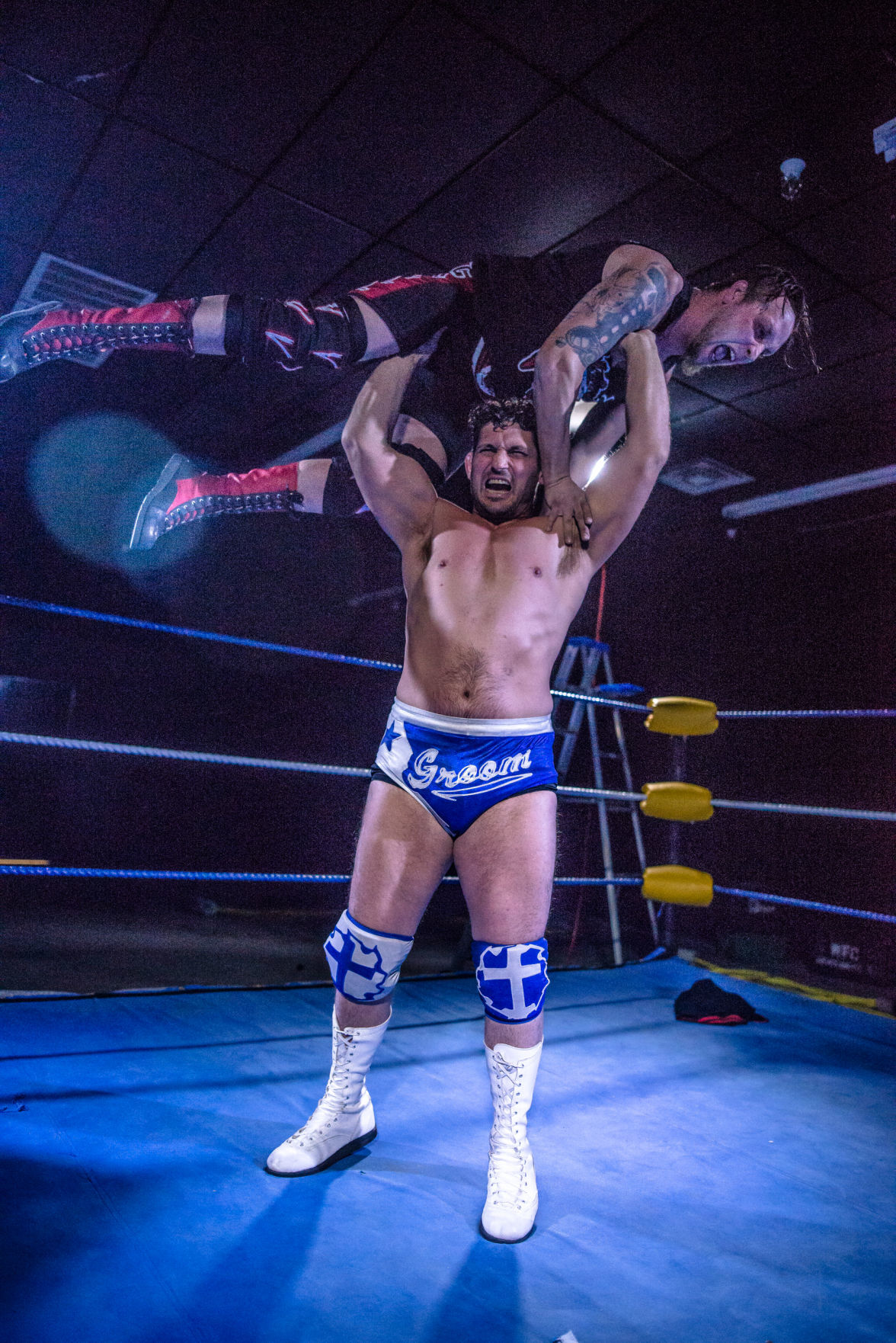 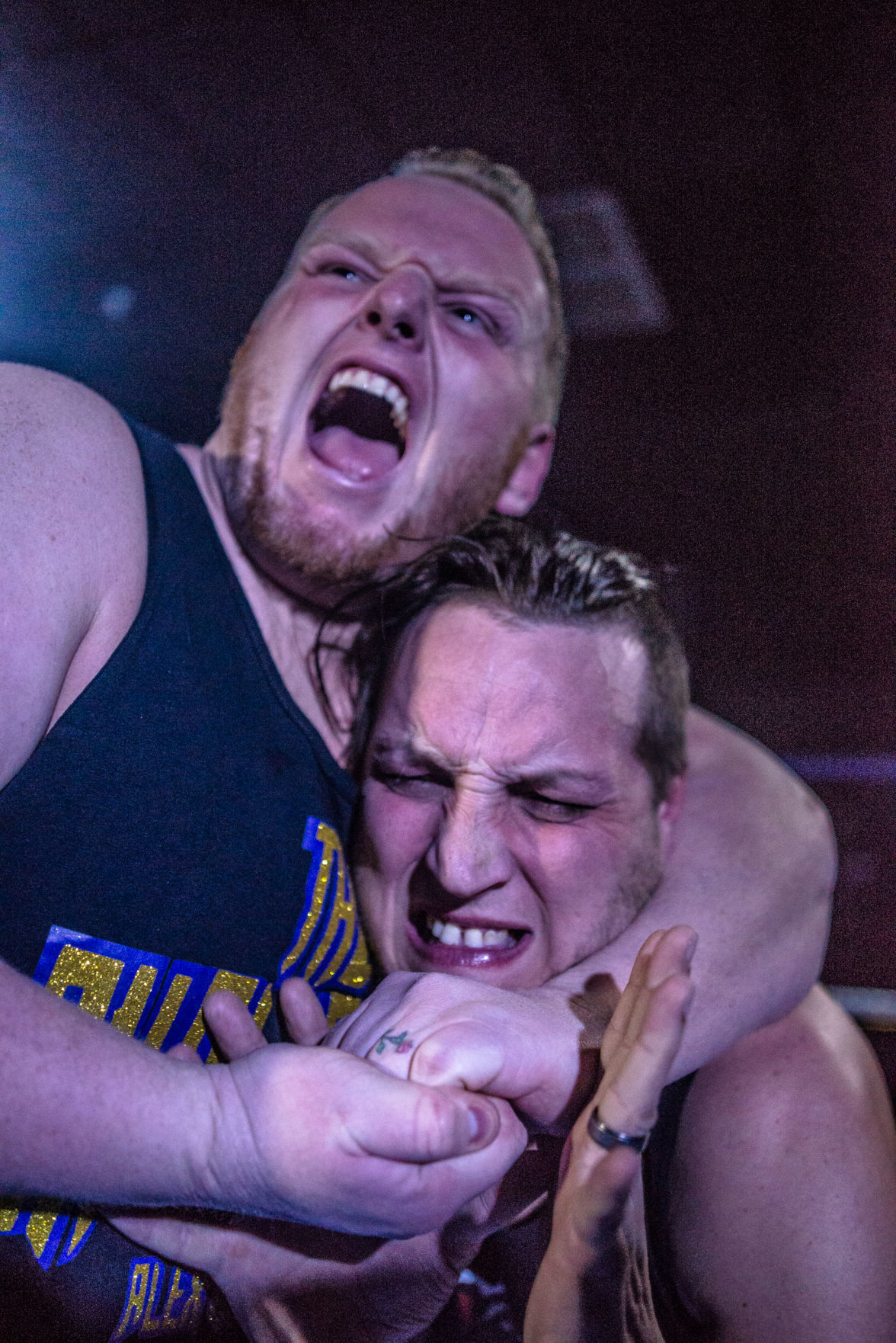 Alex Royal puts Tim Rockwell in a headlock at Perfect Practice Athletic Center, the site of a Saturday, Jan. 18, Wrestling For A Cause fundraiser. JOSEPH RUSHMORE/for the Tulsa World 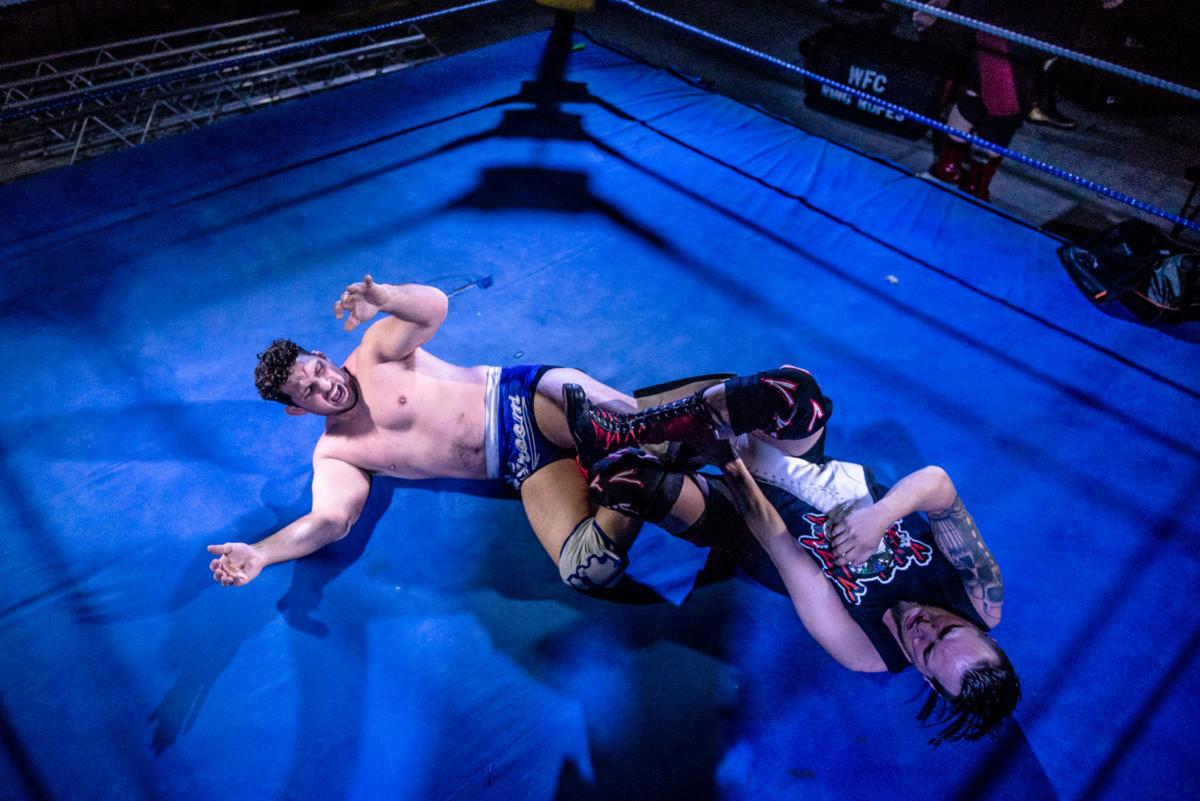 In professional wrestling lingo, Alex Royal is a heel.

But can anybody really be considered bad when, from a big-picture standpoint, they’re creating so much good?

Royal is among heels and babyfaces (bad guys, good guys) in the Wrestling For A Cause talent stable.

Wrestling For A Cause (WFC) is an indy wrestling organization that stages events to raise funds for families of children battling childhood cancer or other ailments.

The next event, dubbed Fight For Allen, will take place at 5 p.m. Saturday, Jan. 18, at The Wrestle Center inside Perfect Practice, 4950 S. Sheridan Road. It figures to be a kick — probably a flying dropkick — as the grapplers unleash their personalities and signature moves.

Tim Johnson’s signature move is the Grapevine DDT. “I wrap my leg around their leg and DDT them,” he said.

Johnson, alias Tim Rockwell, is the owner and president of WFC, but he also puts boots on the ground as a wrestler. He shared WFC’s origin story (founded in 2011) during a recent interview.

Johnson said he learned that a little boy, Ryder, was fighting brain cancer. Johnson reached out to the boy’s family and asked for permission to stage a benefit pro wrestling show. He said it was a big success, and the family asked him to do another show for someone else. The events proved contagious. Johnson said WFC has done shows for 62 children. He said five are no longer with us.

“Those are the heartbreaking moments,” he said. “But that doesn’t hold us down. It makes us fight a little harder.”

Johnson described his pro wrestling character as a cross between Negan from “The Walking Dead” and the Joker from Batman lore. Johnson wears a modified Joker mask over his face when he walks to the ring. He’s a big Joker fan.

No pain, no gain?

Johnson said he separated his shoulder seven months ago and had to miss four weeks of work at Southern Agriculture. He said his wife worked extra during his time away from the job.

But if there’s a physical toll to be paid, you figure it’s worth it or he wouldn’t keep doing it.

Really, this is a win-win venture. Families benefit. And the guys in the WFC stable get to fly around in the ring.

Sam Moore (Sam Stackhouse) of Sapulpa and Bobby Beard (Mr. Nasty) of Tulsa said they have loved wrestling since they were kids. They graduated from spectators to performers.

“From a wrestling standpoint, just the idea of being able to be a pro wrestler, to be able to live the dream, that’s cool,” Royal said. “A lot of these guys that wrestle around here, they are not doing it for money. I don’t think that’s a secret. There’s not a ton of money in independent pro wrestling. It’s more for the love of professional wrestling and being able to create something and turn it into something people can remember.”

Johnson said he has been around pro wrestling all his life (an uncle was a promoter). He decided at age 20 that he wanted to go to “school” to become a wrestler.

“Every child we get to fight for, when we get to do a show for that child, I feel like I’m at Wrestlemania,” he said.

The payoff is two-fold for families designated to benefit from the shows:

“It’s not like we are raising money and we are going to pay for all your hospital bills,” Johnson said.

Johnson said a family once messaged him after a show to tell him money raised from a WFC show was just enough to pay off a deductible. That money erased a worry.

Johnson said he probably has a list of 100 touching moments he could talk about in relation to WFC events. But the most touching moment is any time a smile is generated on the face of a sick child.

“When you look over and you see this child who is fighting cancer smiling and jumping around for two hours, he probably forgets cancer even exists,” Johnson said. “The next thing you know, they are having the time of their lives.”

Mr. Nasty said he has been on board since almost the beginning, when WFC couldn’t afford a ring, and he said he has seen kids grow up and beat cancer. He said he has had parents approach him and credit him for helping to save their child’s life. How? It’s one thing for a child to hear a parent say, “Don’t give up.” It’s another thing when a larger-than-life figure in a wrestling ring reinforces the message.

“It’s powerful,” Mr. Nasty said. “I never had that kind of power before, the power you have with kids. And they inspire us, too. They really do.”

Said ring announcer Tuck Davion: “At the end of every show, either myself or someone else will give the person we are fighting for a special send-off. We talk about their fight, how we are there to fight with them and how they are fighting a fight we can only imagine, but they’re not fighting alone. I always make sure to call them ‘big damn heroes.’ ”

‘They can boo me’

Two local wrestling entities have become tag-team partners. WFC and Body Progression Wrestling, once rivals, have entered into a partnership to stage wrestling shows on alternating weekends (see an accompanying schedule) at The Wrestle Center inside Perfect Practice.

“Nothing vulgar is entertaining in my opinion,” he said. “Everything we do is family-friendly oriented.”

Of course, heels like Royal will still provide doses of bad behavior. In “real life,” Royal owns a nutrition store in Claremore. He said he is very much a people person. But once he climbs into the ring, he gets to flip a switch.

“He’s a completely different guy when he wrestles,” Johnson said. “He takes himself and he turns it up all the way to 10.”

Royal said wrestling fans must have someone to hate. “If I’m not here to be hated, then the person I am facing isn’t loved as much.”

Getting booed feels wonderful, at least in this setting.

“Wrestling For A Cause is a great company,” Royal said. “To see the change that it makes for that two hours kids are in the front row goes a long way. For two hours, they can forget anything they are dealing with at home, and they can come here and enjoy themselves. They can boo me. They can cheer the good guys and go from there.”

Wrestling For A Cause play-by-play announcer C.M. Burnham said this about WFC: “I think, first and foremost, WFC is a great cause. It’s not about the wrestling. It’s not about egos — like so much in pro wrestling is, no matter what the level. It’s about helping families who are fighting childhood cancer.”

Fight For Allen is the next benefit pro wrestling event staged by Wrestling For A Cause.

Where: The Wrestle Center inside Perfect Practice, 4950 S. Sheridan Road.

WFC and Body Progression Wrestling stage events on alternating weekends at the venue. Admission prices are the same as listed above. Schedule:

Alex Royal (right) practices a move with Mr. Nasty at Perfect Practice Athletic Center. It will be the site of a benefit wrestling event Saturday, Jan. 18. JOSEPH RUSHMORE/for the Tulsa World

Alex Royal puts Tim Rockwell in a headlock at Perfect Practice Athletic Center, the site of a Saturday, Jan. 18, Wrestling For A Cause fundraiser. JOSEPH RUSHMORE/for the Tulsa World