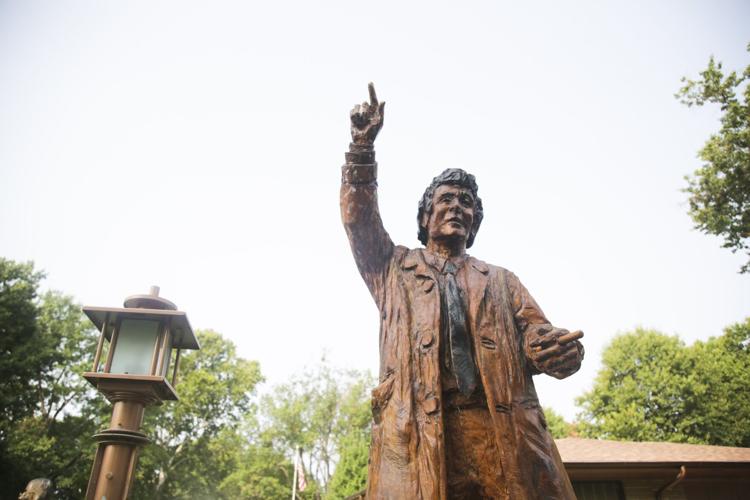 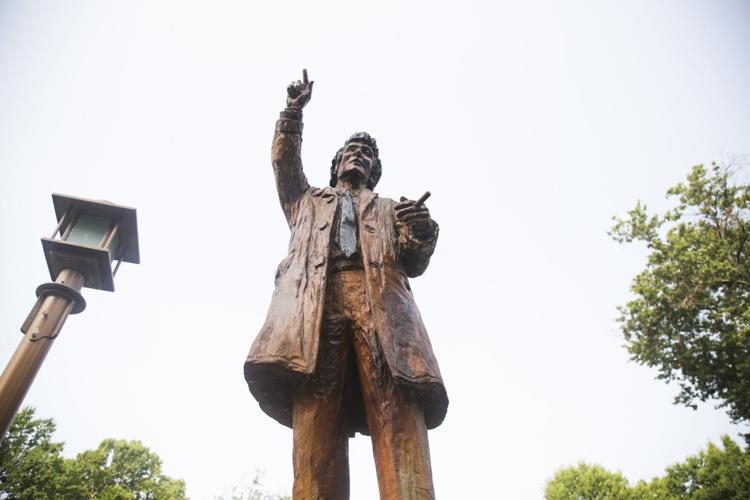 A chainsaw sculpture of Columbo stands in front of Bobby Woolslayer’s Tulsa home. 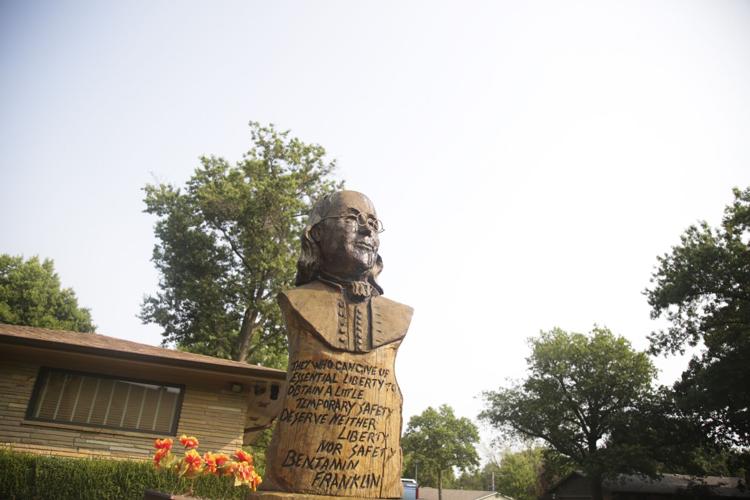 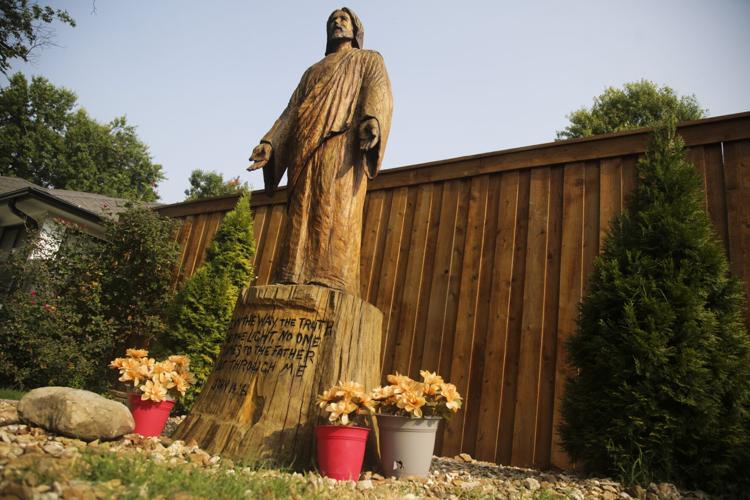 Bobby Woolslayer has a wooden chainsaw sculpture of Jesus Christ standing near his home. 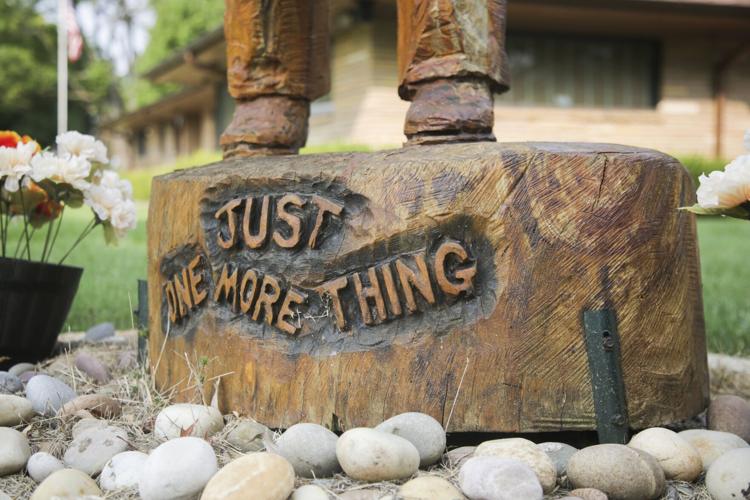 Columbo’s famous phrase (“just one more thing”) can be found on the base of a wooden chainsaw sculpture created by Clayton Coss. 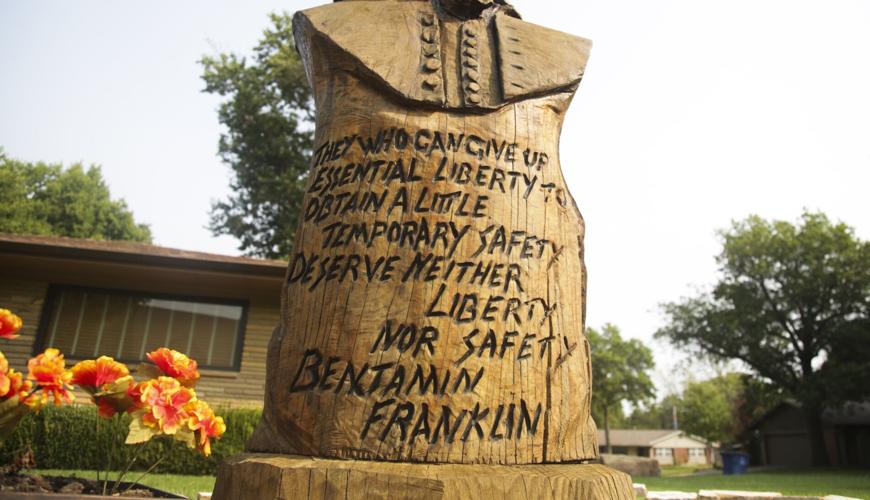 A Ben Franklin chainsaw sculpture in the yard of a Tulsa home features words from the historical figure.

From the department of “just one more thing:”

From 1968 through 2003, Columbo solved every mystery he encountered.

Here’s another mystery: Why is there a wooden sculpture of Columbo in the front yard of a home at East 57th Street and South Kingston Avenue?

Let’s find out the old-school way — the Columbo way, really.

Roll up in a car. Walk to the door. Ring the doorbell.

Mind if I ask a few questions?

Bobby Woolslayer, the homeowner with Columbo in his yard, shared his business card while chatting. And now this all makes perfect sense. He’s a private investigator who was raised during a golden era for television detectives.

Those TV detectives ignited a desire in Woolslayer to become a P.I. “Mannix,” a 1967-75 CBS series starring Mike Connors, was the launch pad.

“My bedtime was my bedtime when I was a little kid,” Woolslayer said, indicating that he was in kindergarten or the early years of elementary school when he began watching “Mannix.”

“It was considered an adult show and my parents didn’t want me to stay up and watch it. So I just almost became my own detective and figured out the best ways to listen through the wall. And then, you know, when my dad was out of town, my mom would let me stay up and watch it.”

Decades later, “Mannix” remains one of Woolslayer’s favorite detective/P.I. series, but “Columbo” (details later) ranks No. 1 on his list.

And that’s why there’s a wooden Peter Falk — finger pointed in “just one more question” fashion — standing in front of Woolslayer’s residence.

You have Woolslayer’s blessing if you want to visit his yard and take photos with any of three wooden figures — Columbo, Ben Franklin and Jesus — on the premises. All are the handiwork of acclaimed chainsaw sculptor Clayton Coss of chainsawartistry.com.

Ben Franklin came first because Woolslayer asked Coss, who has sculpted thousands of trees in the Tulsa metro area, to salvage a “dead, problem tree” in the yard. Jesus was next and Columbo is likely the last addition to Woolslayer’s lawn.

Woolslayer said a tree once was in the spot where the Columbo sculpture stands. He had trouble keeping the tree alive and “needed” something in that location.

One day Coss was patching up Ben Franklin when Woolslayer shared his belief that Sherlock Holmes’ crime-solving tactics, including crime scene preservation and attention to detail, led to the birth of forensic police work in America.

“Which is funny because it came from a book about a fictitious character,” Woolslayer said. “I think Sir Arthur Conan Doyle had this stuff in his brain and he knew it might be taken up as reality one day.”

Coss, after hearing what Woolslayer said about Holmes, suggested creating a Holmes sculpture for the yard, according to Woolslayer. Responded the P.I.: “Clayton, I have been around town. You’ve already done Sherlock Holmes. Why don’t you do a Columbo? He said ‘I never thought about that.’ He wanted to do it as much as I wanted him to do it.”

“I enjoyed the effort,” he said. “One good thing is there are plenty of photos available of Peter Falk in the Columbo attire. That always helps. I’m very thankful for Bobby having the desire to do this. I’m not sure if the younger generation will know who he is unless they’ve seen ‘Columbo’ episodes. I know my daughter enjoys watching.”

Woolslayer said he’s a “Columbo” fan because he was a kid when the show started. Two pilots preceded the first episode of the series, which was christened 50 years ago — Sept. 15, 1971. Also, Woolslayer digs the character because Columbo is able to solve crimes through observation and by asking questions.

“Rather than having to run down in the alleys or have any car chases or gunfights and that sort of thing, you’ve got this really unusual detective who is just basically a regular guy who doesn’t even like guns and doesn’t like that aspect of police work,” Woolslayer said. “He’s able to, kind of like Monk does now, see things and realize that they are significant, much like in the earlier Sherlock Holmes novels.”

Perps in “Columbo” are usually affluent people who think they are smarter than the police. They’re sure they have committed the perfect crime — until Columbo confronts them with proof of guilt.

“They always overlook the famous ‘one more thing,’” Woolslayer said. “Just that Columbo character and the tenaciousness and the hounding of people is hilarious. Every time they turn around, he’s there with another question. It was just a very unusual scenario for a police drama during that era, and I still watch it. I know people who watch it on Saturday night and Sunday night. And I still do most of the time if we’re home.”

Woolslayer said “Columbo” is one of those shows that you can enjoy even if you know what’s going to happen.

“It’s kind of like Seinfeld,” he said. “It’s funny the first time, and it’s funny the 100th time. When Kramer bursts through the door, you can’t help but laugh. Well, this is kind of like that. Columbo arrives on the scene and even though you know what he’s going do after you’ve already seen the whole series 100 times, it’s still entertaining to watch him outwit a character who is really smart themselves, but they overlook things the police will see or an experienced detective would see. I think that bears out real-life detectives, too.“

Woolslayer repeated that “Columbo” was different from the TV detective norm and he said the series was never a “whodunnit.”

“You know from the first five minutes who did the crime,” he said.

The Men Who Would Be Scene: Episode 25

Woolslayer said he has seen other chainsaw artists at work and he’s convinced Coss could win a worldwide competition.

“You can’t teach that,” Woolslayer said. “You can’t learn that. It’s either in you or it’s not. I think Clayton’s talent is a God gift-type thing. That doesn’t negate the level of self-discipline and physical labor that’s required. It certainly doesn’t make it any easier. But he’s got that (gift) and I’ve never seen anybody have it so well, just like I don’t expect to ever see somebody playing a guitar exactly like Stevie Ray Vaughn, as if it’s an extension of his body. Clayton handles these chainsaws like they’re just an extension of his body and it’s amazing to watch.”

Images of Coss’ creations can be viewed online at chainsawartistry.com.

“He understands that he has been given this gift and God wants him to use it,” Woolslayer said. “And he has used it to make Tulsa a better place.”

Private investigator Bobby Woolslayer has a Columbo statue in the yard of his Tulsa home. He submitted a list of his favorite television private eyes and detectives to the Tulsa World:

Robert McCall from the 1980s TV series “The Equalizer.”

Three season one episodes of the Paramount+ series were released before the announcement that a second season has been green-lighted.

Golden Driller Plaza got a makeover in conjunction with the arrival of "Tulsa King," a streaming series starring Sylvester Stallone.

Considering she has been a part of more than two dozen Christmas films, it’s likely there wasn’t any angle Candace Cameron Bure hadn’t explored.

Nothing beats a little face time with Santa Claus.

"Tulsa King," 'which stars Sylvester Stallone, was filmed in Oklahoma City and Tulsa, but the original setting was intended to be Kansas City.

A chainsaw sculpture of Columbo stands in front of Bobby Woolslayer’s Tulsa home.

Bobby Woolslayer has a wooden chainsaw sculpture of Jesus Christ standing near his home.

Columbo’s famous phrase (“just one more thing”) can be found on the base of a wooden chainsaw sculpture created by Clayton Coss.

A Ben Franklin chainsaw sculpture in the yard of a Tulsa home features words from the historical figure.