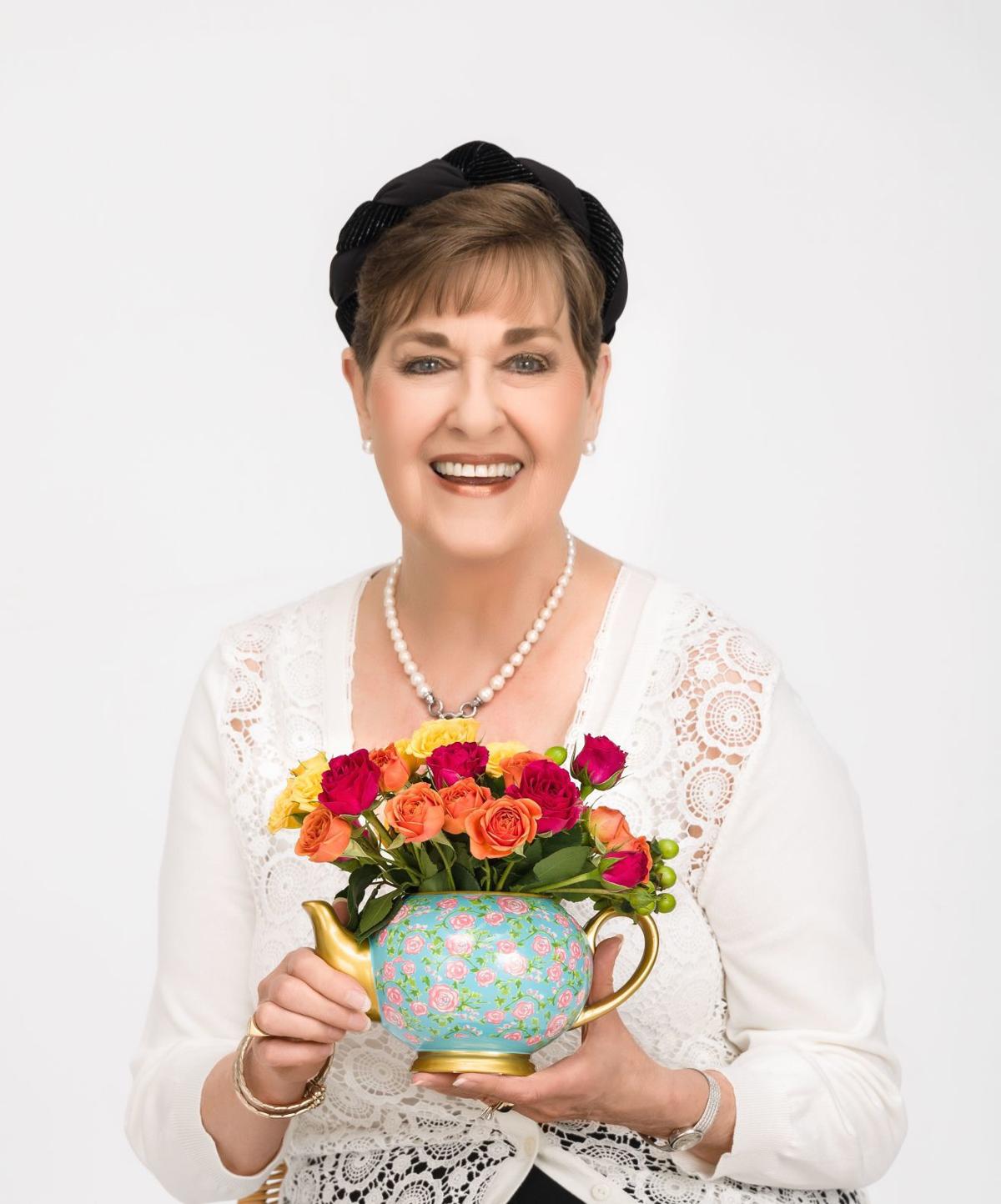 Kerry Vincent (above) and fellow sugar artist Maxine Boyington conceived the idea of the Oklahoma State Sugar Arts Show in 1992 and held its first incarnation at the Tulsa Promenade mall in 1993. 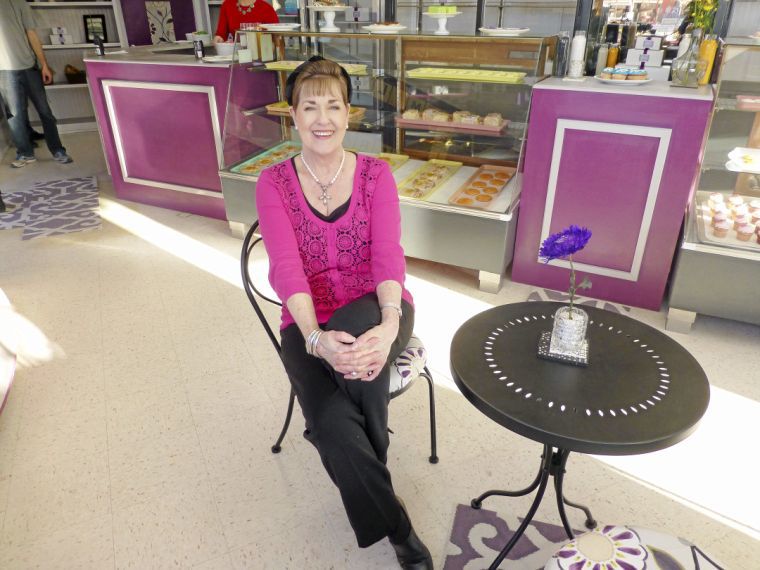 Tulsa’s own “Queen of cakes” Kerry Vincent hosted “Save My Bakery” on the Food Network at Ann’s Bakery in 2014. 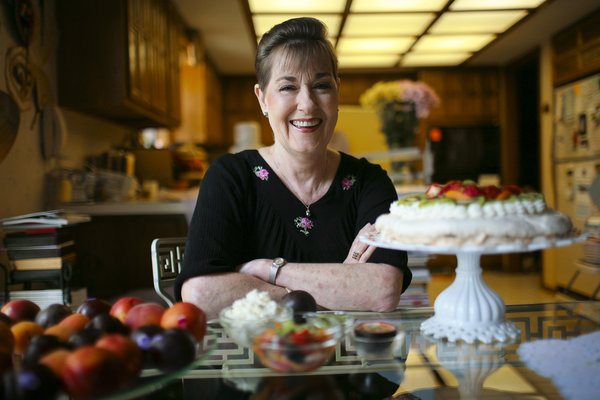 Kerry Vincent grew up eating Pavlova in Perth, Australia, the city where the Pavlova is believed to have been born.

For someone who came to be known internationally as the “Queen of Cakes,” Kerry Vincent’s introduction into the world of sugar and flour came about almost by chance.

“It was accidental, as most of my life’s direction has been,” said Vincent in a 2015 interview with the Tulsa World. “It was the desire to provide a cake to help a friend solve a gigantic dilemma.

“I taught myself with a few books and some equipment that I made myself, along with some limited commercial tools,” Vincent said. “They were hard to come by those days.”

It also allowed Vincent to develop a distinctive and unusual style when it came to crafting such basic baking elements as sugar into works of culinary art. “It was different because I was isolated and not influenced by other artists,” she said.

Vincent, an award-winning baker, sugar artist and TV personality who co-founded the Oklahoma State Sugar Arts Show and was its driving force for 25 years, died Jan. 2. She was 75.

The announcement of Vincent’s death came in a post on the Facebook page for the Oklahoma State Sugar Arts Show.

“It is with great sadness that I have to report the passing of Kerry Vincent earlier this evening,” the post reads. “Being a very private person when it came to all things not cake, she did not want to put her illness out there to the public.

“Unfortunately her fight has come to an end but she will no longer have any pain. She will be sorely missed by all who she has touched through the Sugar Arts as well as personally.”

Mark Andrus, president and CEO of the Tulsa State Fair, which hosted the Oklahoma State Sugar Arts Show for much of its 25-year history, recalled the many times he would accompany Vincent through the exhibition space at Expo Square as the participating bakers were setting up their displays.

“You could tell that everyone stood a little bit taller when they saw Kerry approaching,” Andrus said. “She was just so smart and talented and skilled, and she always demanded excellence — of herself and of all those around her. And that attitude tends to rub off on people. They wanted to meet her standards.

“She was a lady to be admired, respected and — to be honest — feared,” Andrus said. “Even by me, sometimes. But I’ve always liked people who demand the best of everyone, and Kerry never let up in her pursuit of excellence.”

Vincent was born Kerry Flynn in June 1945 in Wyalkatchem in Western Australia. In 1964, Vincent, who worked as a model in her younger days, was a Western Australian state finalist in the Miss Australia Quest pageant.

Vincent developed a love of travel early in life and resided in the United Kingdom, Mexico, Switzerland, Singapore and Holland, before ultimately settling in Tulsa in the early 1990s with her husband, Doug Vincent, a petroleum engineer and founder of AngelFlight, who survives her.

As a professional baker and cake decorator, Vincent earned more than 100 blue ribbons for her work and is credited with inventing a number of unique cake recipes and techniques in sugar craft, which include the Vincent Marquetry, and movement in stenciled or painted sugar flounces and skirting.

She and fellow sugar artist Maxine Boyington conceived the idea of the Oklahoma State Sugar Arts Show in 1992 and held its first incarnation at the Tulsa Promenade mall in 1993.

Three years later, the show moved to what would become its permanent home in the River Spirit Expo at the Tulsa State Fair. The Grand National Wedding Cake Competition evolved out of the original event.

The show and wedding cake competition annually brought hundreds of bakers, decorators and other sugar artists from around the world to Tulsa for the two-day event.

The show’s success led to Vincent’s career on television. She served as a judge on “Food Network Challenge” from 2006 to 2012 and was the host of “Save My Bakery” in 2014. Vincent was also a judge on “The Great Australian Bake Off” and appeared on “Holiday Gingerbread Showdown,” “The Best Thing I Ever Ate” and “Last Cake Standing.”

In October 2018, at the conclusion of the 25th annual Oklahoma State Sugar Arts Show, Vincent announced that she was bringing the show to an end.

“I always announce what next year’s theme for the Grand National Wedding Cake Competition will be at the end of the show,” Vincent said in a 2018 interview with the Tulsa World. “This time, I said, ‘The theme for next year is, there is no theme.’ And when I said that, there were tears and tears, just floods of tears from almost everyone.”

Vincent said she made the decision to close the show about two years previously.

“I decided that the 25th anniversary show would be the year to end it,” she said. “I knew I wanted to go out on a high note, and I thought this would be the best time.”

Vincent said she considered turning the show over to someone else and stepping down from the day-to-day work.

“But when you hand over something of yours to someone else, you lose all control over it,” she said. “And because my name is so intrinsically linked with the Oklahoma State Sugar Arts Show and the Grand National Wedding Cake Competition, I wouldn’t want to see it deteriorate in any way.

According to the OSSAS Facebook post, there will be no public services in accord with Vincent’s wishes.

The film, produced by Sam Pollard and Joyce Vaughn, was written by Tulsa native Carmen Fields, a journalist and media consultant now based in Boston, Massachusetts.

Larry King, the suspenders-sporting everyman who interviewed world leaders, movie stars and ordinary Joes for a half-century, died Saturday. He was 87.

A deal with the devil: 'Losing Alice' poses plenty of 'what if?' questions

If someone showed a keen interest in your work and happened to know everything you’d done, would you be flattered – or unnerved? That's the opening question of the new AppleTV+ series.

Canceled TV shows 2021: Which of your favorite series are coming to an end?

A roundup of all of the shows that are coming to an end this year.

Actor Gregory Sierra, best known for roles in "Sanford and Son" and "Barney Miller," died Jan. 4 from cancer, his widow Helene Tabor said. He was 83.

“Walker, Texas Ranger” painted its lawman as a bit of a lone wolf. The new edition includes a brother, two children and his parents — plus more diverse perspectives.

The Critics Choice Association revealed its TV nominations on Monday. Film nominees will be revealed Feb. 8. Here's a look at who made the list.

Kerry Vincent (above) and fellow sugar artist Maxine Boyington conceived the idea of the Oklahoma State Sugar Arts Show in 1992 and held its first incarnation at the Tulsa Promenade mall in 1993.

Tulsa’s own “Queen of cakes” Kerry Vincent hosted “Save My Bakery” on the Food Network at Ann’s Bakery in 2014.

Kerry Vincent grew up eating Pavlova in Perth, Australia, the city where the Pavlova is believed to have been born.