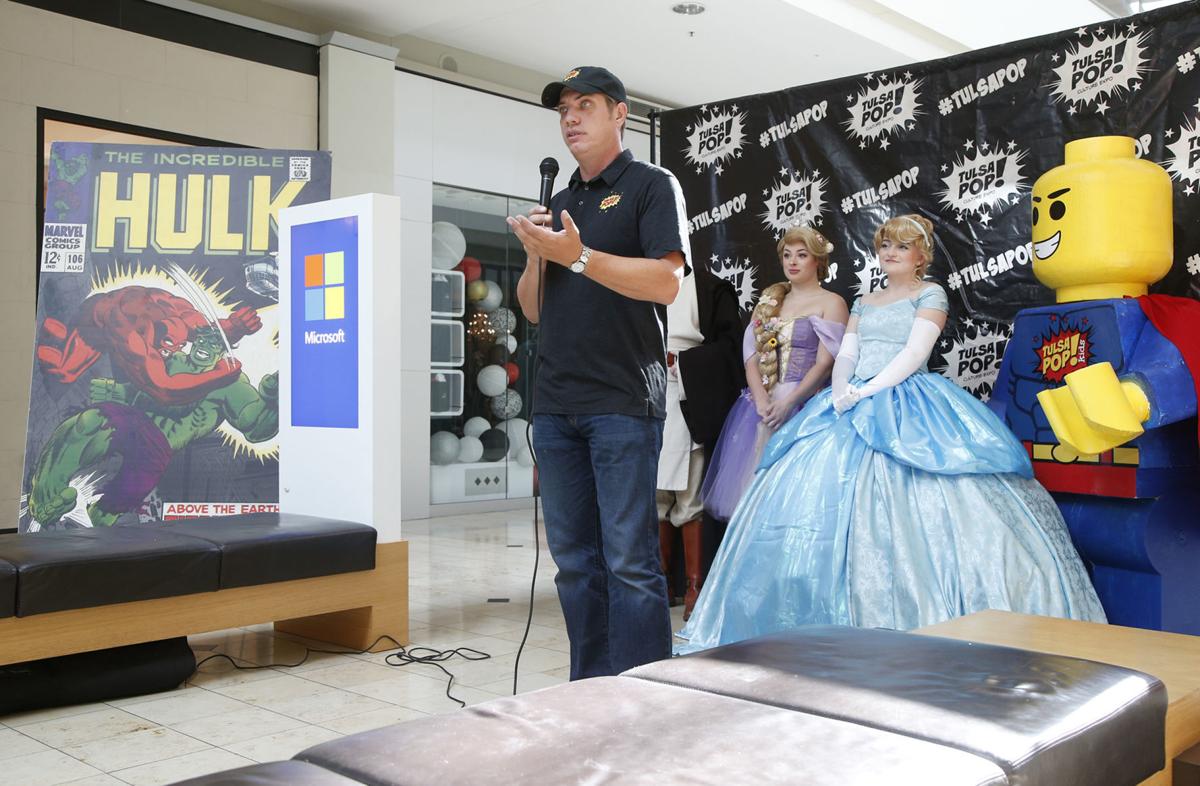 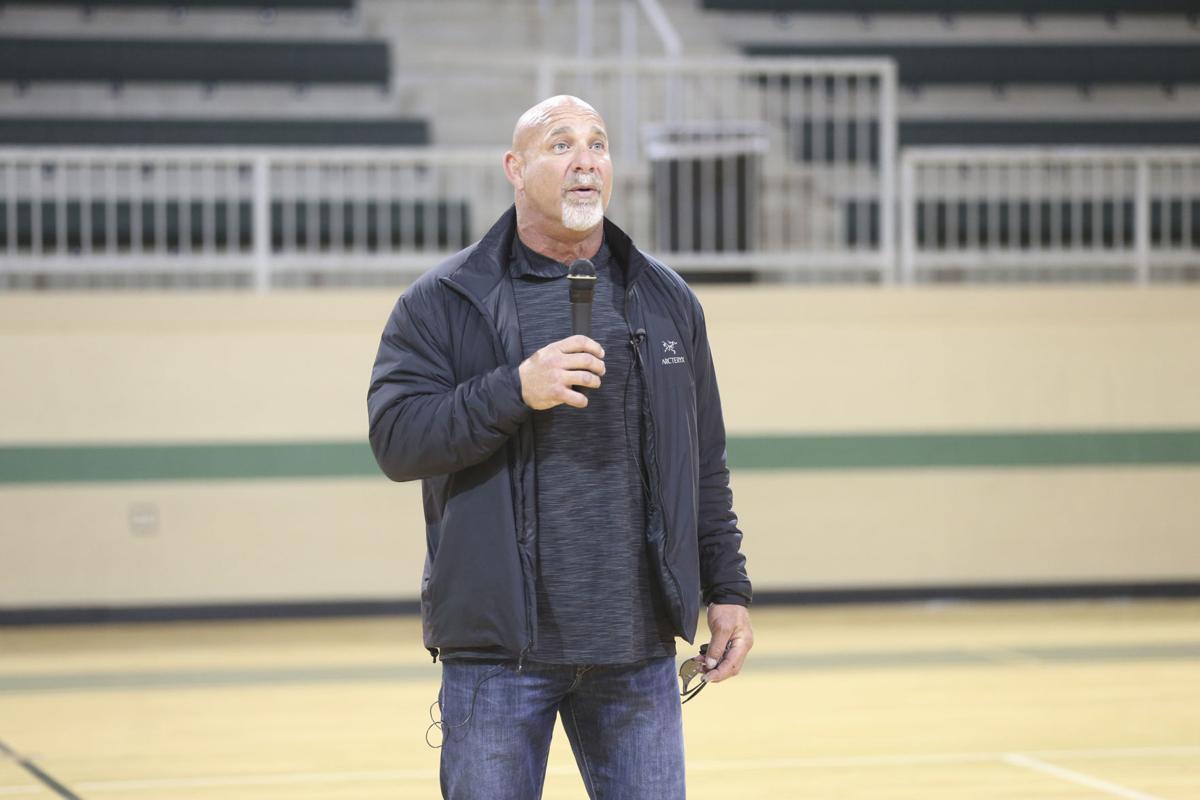 Professional wrestler Bill Goldberg, shown during a 2018 appearance at his alma mater, is returning to Tulsa for the Tulsa Pop Culture Expo. IAN MAULE/Tulsa World

Just for the sake of exploring an Oklahoma link, a phone interview with Lindsay Wagner began with a question about working alongside James Garner.

Garner grew up Norman. Wagner joined him in the pilot for “The Rockford Files.” She also guest-starred in an additional episode of the television series.

“And in fact they were getting ready to make my character a regular when ‘The Bionic Woman’ came up,” Wagner said.

You know the path that was taken after Wagner reached that particular fork in the road.

Now the Bionic Woman is on the road to Tulsa.

Wagner, who played technologically enhanced operative Jaime Sommers in “The Six Million Dollar Man” and “The Bionic Woman” will be among celebrity guests at the 2019 Tulsa Pop Culture Expo, a third-year convention scheduled Saturday, Nov. 2, and Sunday, Nov. 3, at the former Sears location inside Woodland Hills Mall.

Wagner won an Emmy for her portrayal of Sommers and won the hearts of TV viewers, who refused to let the character stay “dead.”

Wagner debuted as Sommers in a two-part episode of “The Six Million Dollar Man” in 1975. Sommers sustained grave injuries in a skydiving accident and received bionic implants, just like her $6 million sweetheart, Steve Austin. That initial story ended with Sommers’ death.

By popular demand, Sommers “got better” and was resurrected in time to help launch the following season of “The Six Million Dollar Man.”

“We did the second two-parter and appeased the audience and let the kids know that Jaime is OK, because they traumatized the whole United States child demographic with killing her off right before their eyes,” Wagner said. “So we had to bring her back and we did that,”

Neither two-parter was intended as a launching pad for a spin-off series. But the network decided Wagner merited a series of her own and TV viewers endorsed the decision by tuning in to watch. “The Bionic Woman” finished her rookie season a few notches above “The Six Million Dollar Man” in the Nielsen ratings.

Shouldn’t Wagner get credit for creating a character so popular that she continued to have adventures far beyond that original guest star gig? Is it OK for Wagner give herself a pat on the back for that?

“Well, a little bit, but not entirely,” she said. “I think the popularity of it in becoming a series and what we accomplished as a series, I was deeply involved with. But it was ‘time’ also.

“It was the beginning of the women’s movement and they were creating a female superhero, which hadn’t been done before except in comic books. The fact that I wanted to keep her very human, that was my contribution was playing her very human, because she was a human. She wasn’t a from-another-planet superhero kind of thing. She was a human being.

“And so I just kept wanting to make her as human and likeable as possible, like your cousin or your next-door neighbor or your favorite teacher or something like that. I wanted kids to be comfortable and just have the sense they are cared about, so that was what I contributed to the initial episodes was the way I played her. But the fact that a powerful woman was being created for television, that was a huge part of it.”

Wagner could have said “no” when “The Bionic Woman” series was pitched to her. One factor that swayed her to enlist was the opportunity to have input and be a collaborator on the types of stories that were going to be told. Her perspective: Here’s a chance to bring a strong woman character to TV screens without making that character into a man.

“In television back then, and it kind of is (that way) today too, there was a stereotypical good guy and ‘might’ ended up winning and it’s just a good thing that the stronger one is always the good guy,” she said.

“Because Jaime had super powers and was really strong and could, in fact, win any battle, I saw this as an opportunity to help create a role model for young women that showed that strength and sensitivity can live within the same person.”

Wagner worked with writers and producers and lobbied for the Sommers she envisioned.

“We had a franchise,” she said. “There were the good guys and bad guys. It was that kind of a show. And we had bionics, so we had to use them. But, as a woman, I would encourage them to write things where Jaime would think about things and would use compassion and would see the so-called enemy as another person, even though she had to stop them from doing what they were doing. As an adult, if you analyze the show, you see a lot of times where a male hero would have just kind of come in and be stronger and bash everybody and win. That’s what I (told them) I don’t want to do.”

As a result, there are many life lessons in episodes of “The Bionic Woman.”

Here’s another: Life’s not fair. ABC abandoned “The Bionic Woman” after two seasons even though it finished No. 14 in the ratings.

“It’s kind of a long story,” Wagner said. “There was a desire by one of the executives to have everything that was on ABC be their own creation. And ‘The Bionic Woman’ wasn’t one that they created, so they kind of got rid of it after a while.”

“The Bionic Woman” continued for a third season because NBC swooped in to pick up the show.

Said Wagner: “But then the higher-ups at NBC said ‘You know, that guy has done such a good job building up ABC, let’s hire him to build up NBC.’”

Fred Silverman switched networks and pulled the plug on “The Bionic Woman” for a second time.

It proved to be a temporary setback. From 1987-94, Steve Austin and Jaime Sommers reunited for three TV movies. Wagner confirmed that it was her suggestion in the last of those movies to have the characters get married. They got engaged in the original two-parter almost 20 years earlier.

Said Wagner: “I said, ‘Look, if we are going to do another one of these movies, we have to let them get married because this is sheer torture for the audience who followed it since they were 6 years old, this unrequited love. Please. I’ll do it if we can get married.’ And they said ‘OK.’”

Being on the convention circuit gives Wagner an opportunity to come face-to-face with fans who grew up with the bionic couple. (You really had to be a viewer at that time to understand what a monumental thing in pop culture history it was when Steve Austin — and later Jamie Sommers — teamed up with Bigfoot. Wagner said she used to get more Bigfoot questions at conventions than she gets now.)

Wagner said she only does a few conventions a year. She initially resisted joining the convention fray. She didn’t think it would be fun. A friend who runs her fan club talked her into talking the leap (cue the bionic sound effect). She’s glad she did it because conventions have allowed her to, well, she can explain.

“This just tickles me about my show in particular,” she said. “I’m sure there are some shows that other actors have the same kind of experience with, but, mine in particular was a real favorite of children. So, 30-year-olds, 40-year-olds, 50-year-olds, even 60-year-olds, they come up to me now and, by the time they get to my table and start talking to me, they are 6 years old or they are 12 years old. And I see the child in every person and they are giddy.

“It’s the cutest darn thing. I don’t care how tatted or gnarly or nose-ringed or whatever, as soon as they start talking to me and look me in the eyes, they go back to being a child and it’s just sweet and I hear all these wonderful stories and what it was like for them. So, for me, I get to learn about them and what it meant to them.”

Professional wrestler Bill Goldberg, shown during a 2018 appearance at his alma mater, is returning to Tulsa for the Tulsa Pop Culture Expo. IAN MAULE/Tulsa World