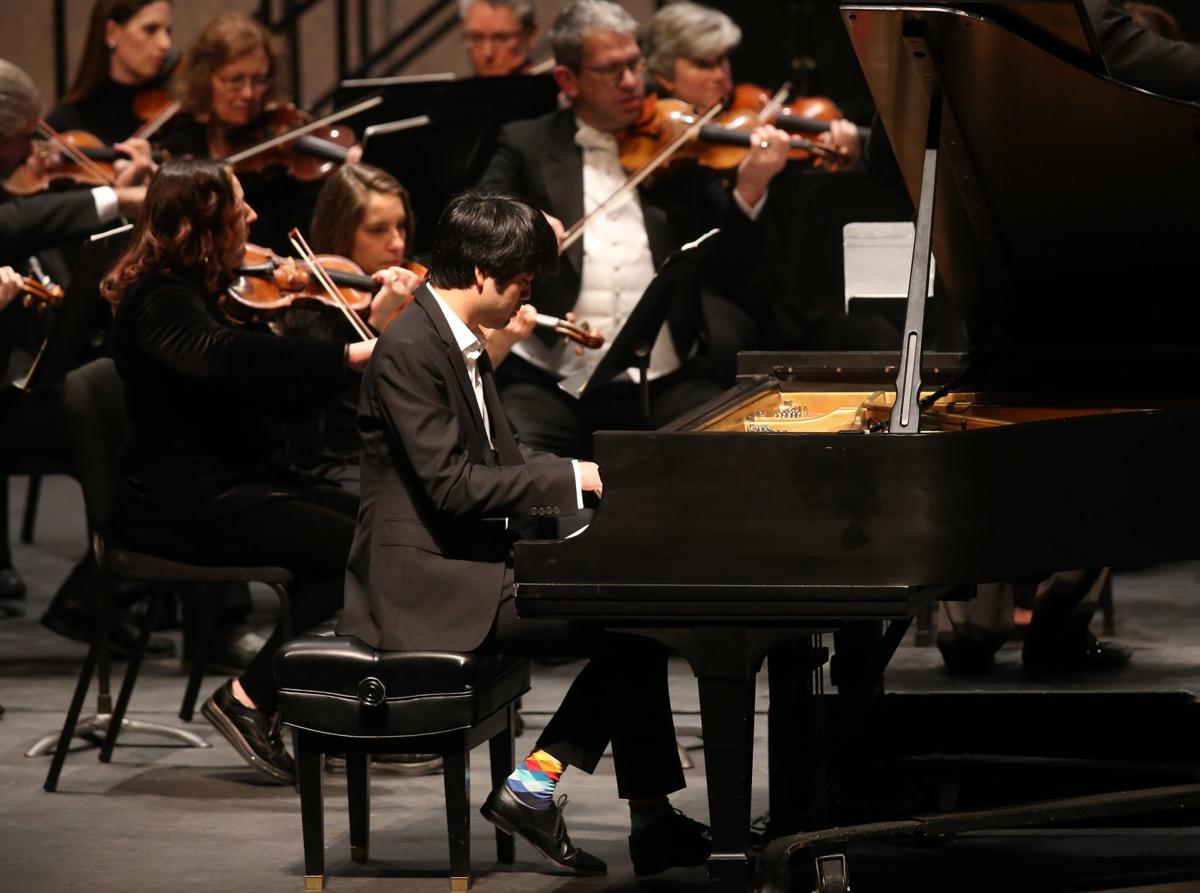 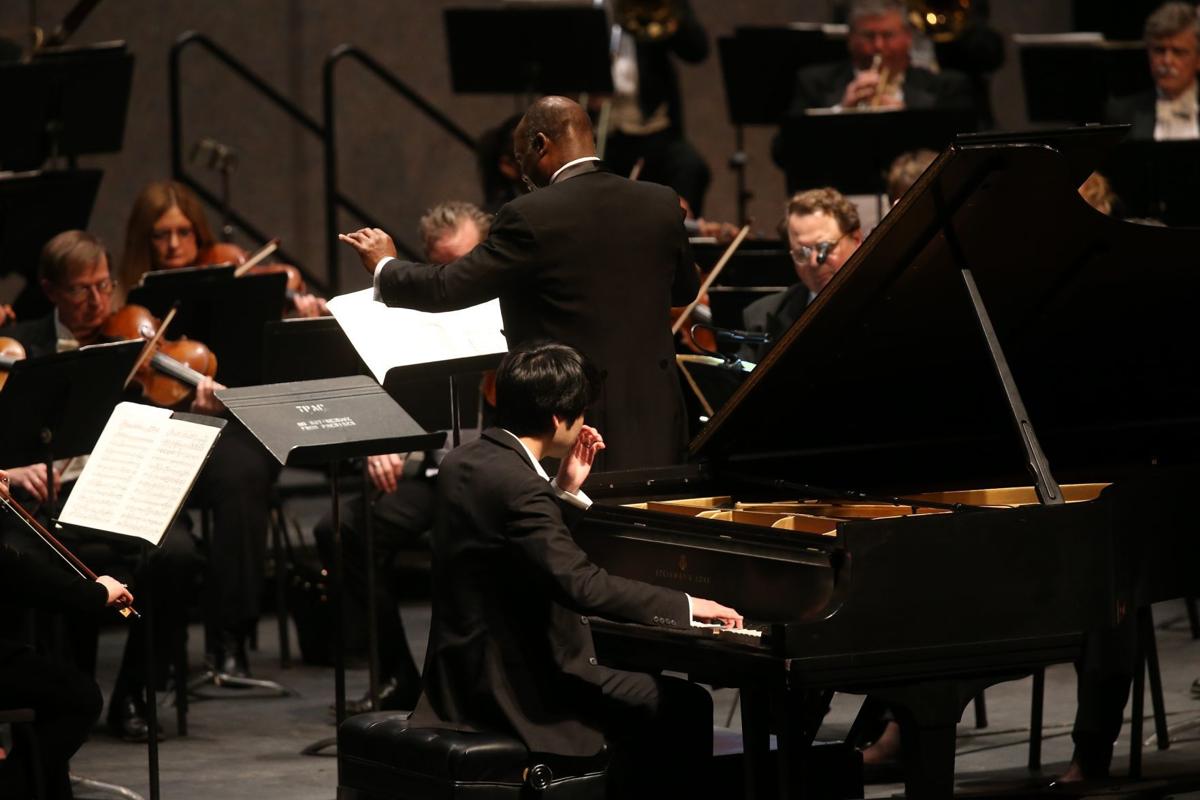 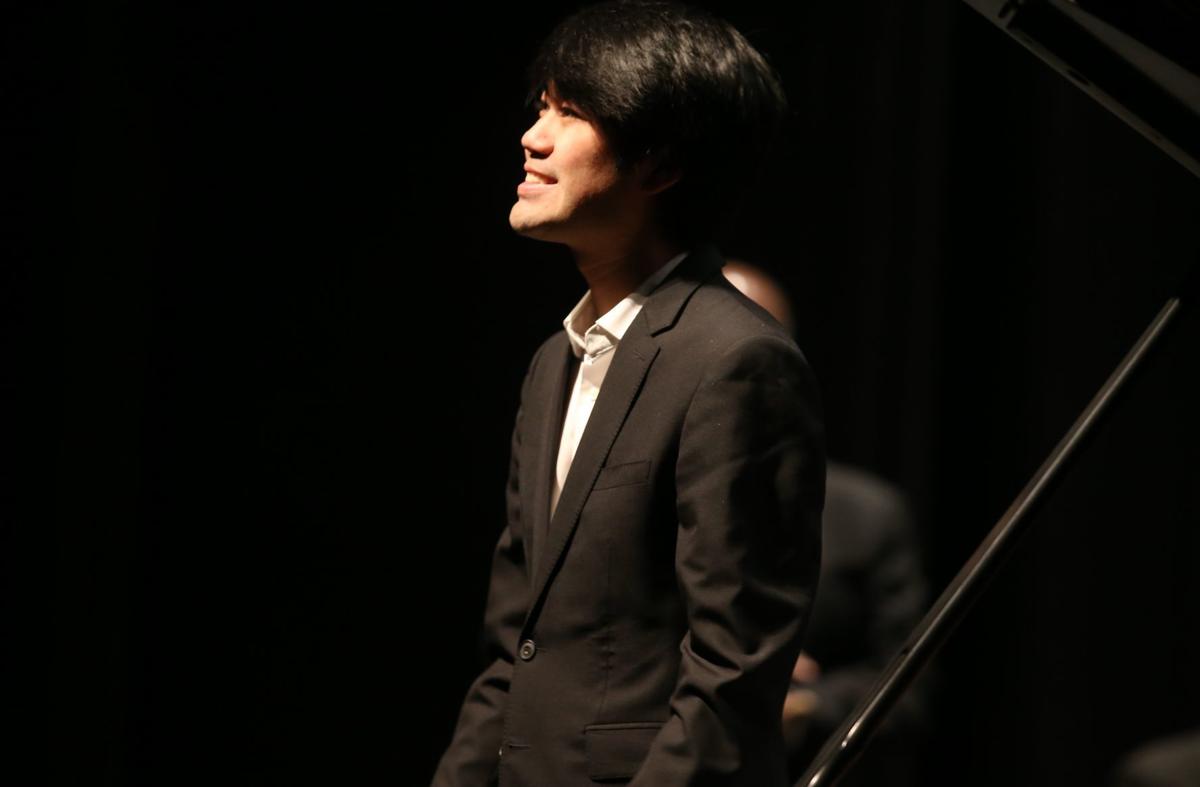 Guest artist Sean Chen (left) performs the Piano Concerto in A Minor, Op. 16, by Edvard Grieg with the Tulsa Symphony on Saturday at the Tulsa PAC on Feb. 8, 2020. TOM GILBERT/Tulsa World

Guest conductor Leslie Dunner apparently decided that, for his debut with the Tulsa Symphony Orchestra on Saturday at the Tulsa PAC, he would let the music speak for itself.

Dunner acknowledged the applause as he strode out onto the Chapman Music Hall stage, then took his place on the podium and launched directly into the first work of the evening, Michael Torke’s “Javelin.” No opening remarks, no commentary on the music to be performed.

Such prefatory words have become something of a standard operating procedure at orchestra concerts. It wasn’t always that way — in times not so long past, it was a rare thing for a conductor to engage with an audience so directly.

On the other hand, the music and how it is played should speak for itself. And what was heard Saturday at the Tulsa PAC was music that was as crisp and understated as Dunner’s economical conducting style.

“Javelin,” which Torke wrote for the Atlanta Symphony Orchestra in honor of that city hosting the 1994 Olympic Games, made for a bright beginning. It is an energetic orchestral workout, with passages that are cinematic in the best sense of the word and a constant sense of forward motion until the final seconds, when the music seems to fall to Earth like a javelin plummeting from the sky.

This was followed by the Symphony No. 39 in E-flat Major, K. 543, by Mozart. Much is made of the fact that Mozart wrote this piece during one of his most personally and professionally fraught periods of life, as it is a work that — its somewhat foreboding opening aside — is primarily a piece of surprising delicacy and balance, the dark always more than offset by the light, the sparkle easily vanquishing the gloom.

Under Dunner’s economical gestures, the Tulsa Symphony’s performance was precise and polished — a place for every note and every note in its place, if you will.

Mozart’s greatest music usually reveals depths of rich and complex emotion beneath its pristine surface; here, we were shown an immaculate surface, and Saturday’s audience apparently loved every minute of it, applauding enthusiastically after each movement.

Closing out the evening was guest artist Sean Chen performing the Piano Concerto in A Minor, Op. 16, by Edvard Grieg.

Chen, the bronze medalist at the 14th Van Cliburn International Piano Competition in 2013, brought a burst of energy and personality to the stage as he tore into this familiar piece.

His playing was expressive without being showy, shaping well-worn phrases with a kind of casual elegance that made them crackle with freshness, building the first movement cadenza into a display of focused energy and pianistic brio, and bringing a contemplative sensitivity to the quietest sections of the concerto’s slow movement, which faded into a whispered silence before the thunderclap start of the rousing finale.

For an encore, Chen returned to perform his own arrangement of the slow movement from the Third Sonata for Solo Violin by J.S. Bach.

Princess Diana left quite an inheritance for her sons

Princess Diana left quite an inheritance for her sons

Selena Gomez says her past relationships were cursed

Selena Gomez says her past relationships were cursed

Festivals all around: Take your pick among Bixby Green Corn Festival and other events

The annual Bixby Green Corn Festival will include a couple of new twists. Here's a hint: How many cheeseburgers can you eat?

Britney Spears asks judge to free her from conservatorship

Britney Spears asked a judge Wednesday to end court conservatorship that has controlled her life and money since 2008.

Five prominent individuals have pledged to raise $75,000 for the organization.

Guest artist Sean Chen (left) performs the Piano Concerto in A Minor, Op. 16, by Edvard Grieg with the Tulsa Symphony on Saturday at the Tulsa PAC on Feb. 8, 2020. TOM GILBERT/Tulsa World