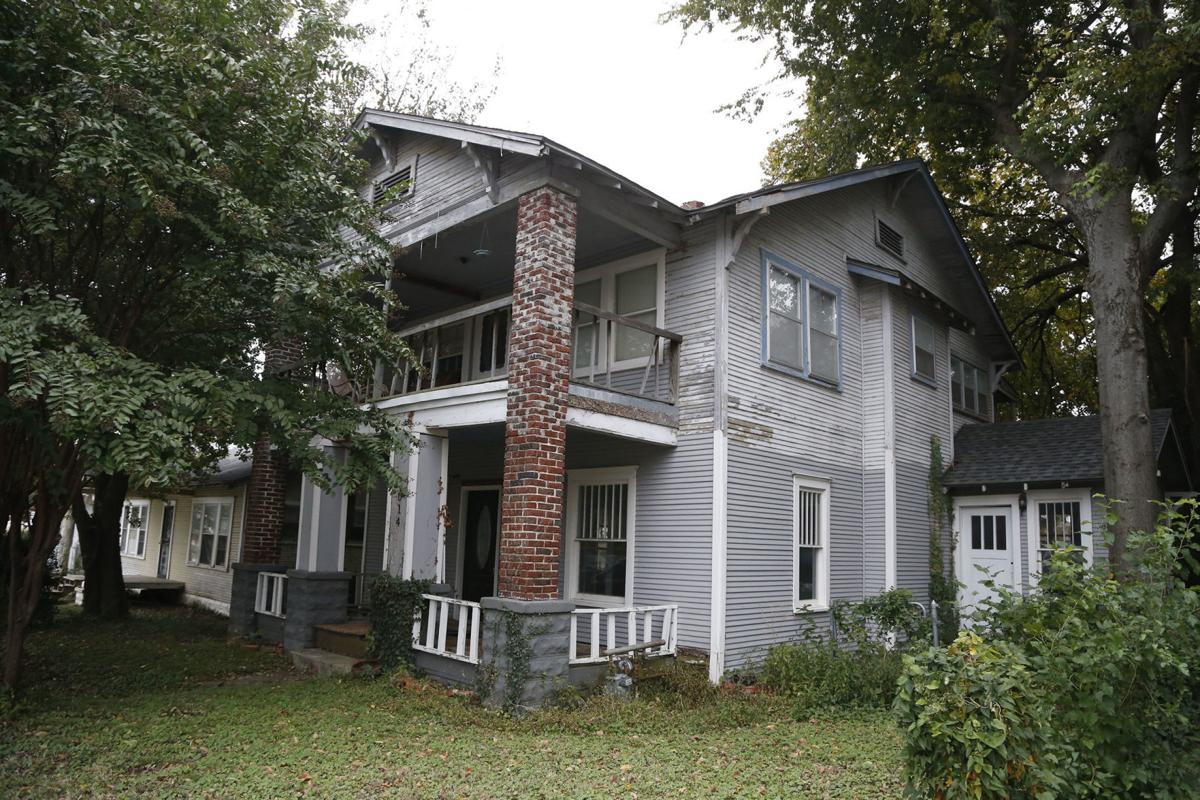 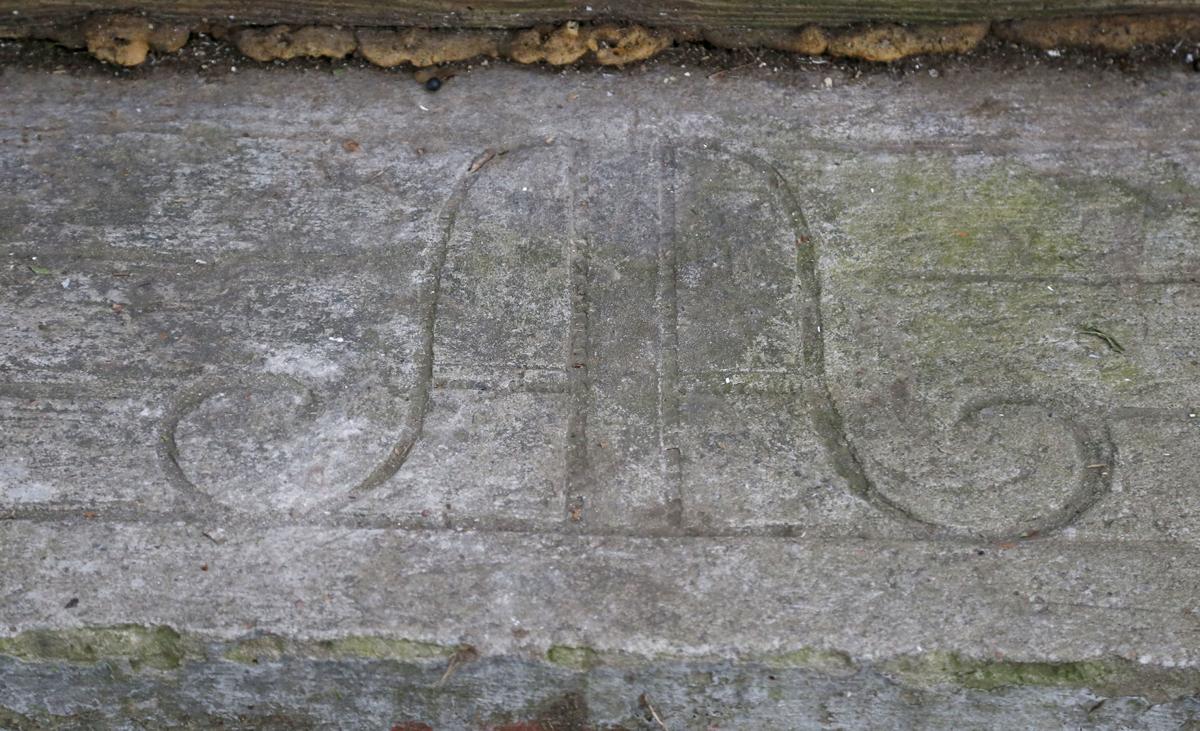 The initials “A. A.” on the front step of Paul Harvey’s childhood house are presumably those of his mother, Anna Aurandt. STEPHEN PINGRY/Tulsa World 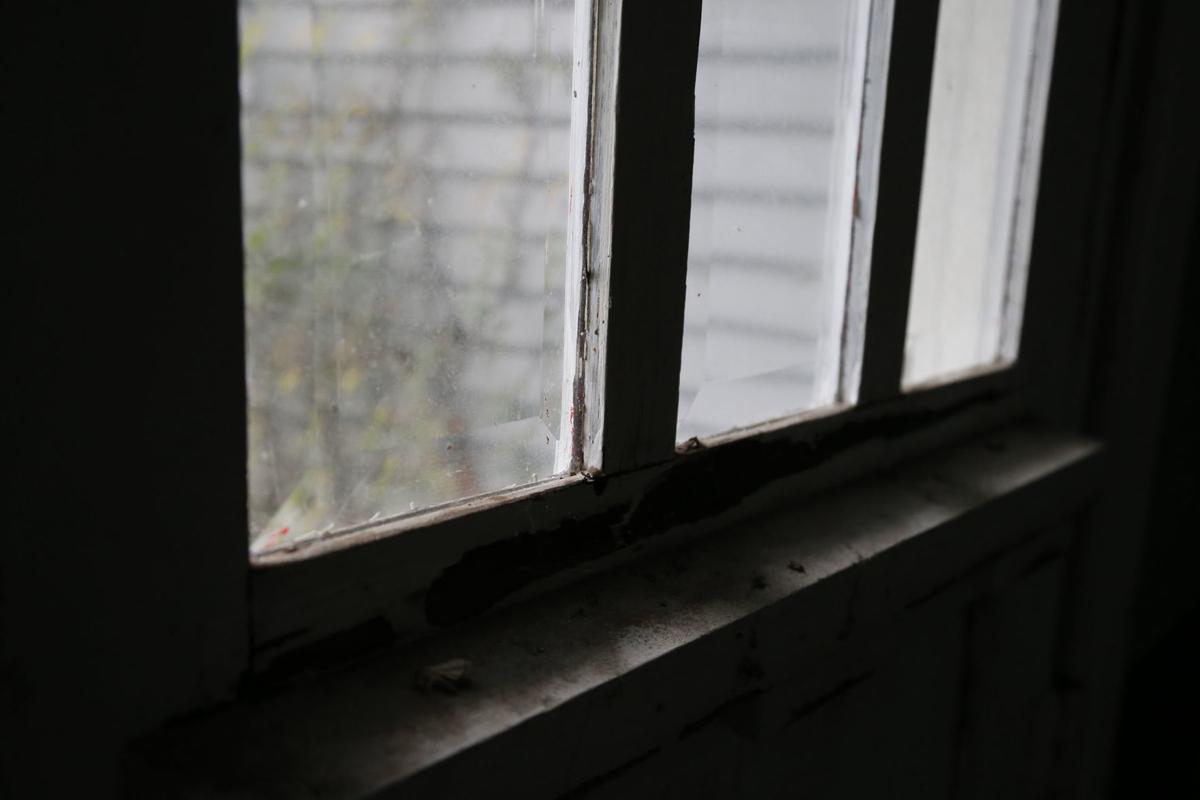 Paul Harvey would have looked out these windows as a child. He grew up in a home at 1014 E. Fifth Place. STEPHEN PINGRY/Tulsa World 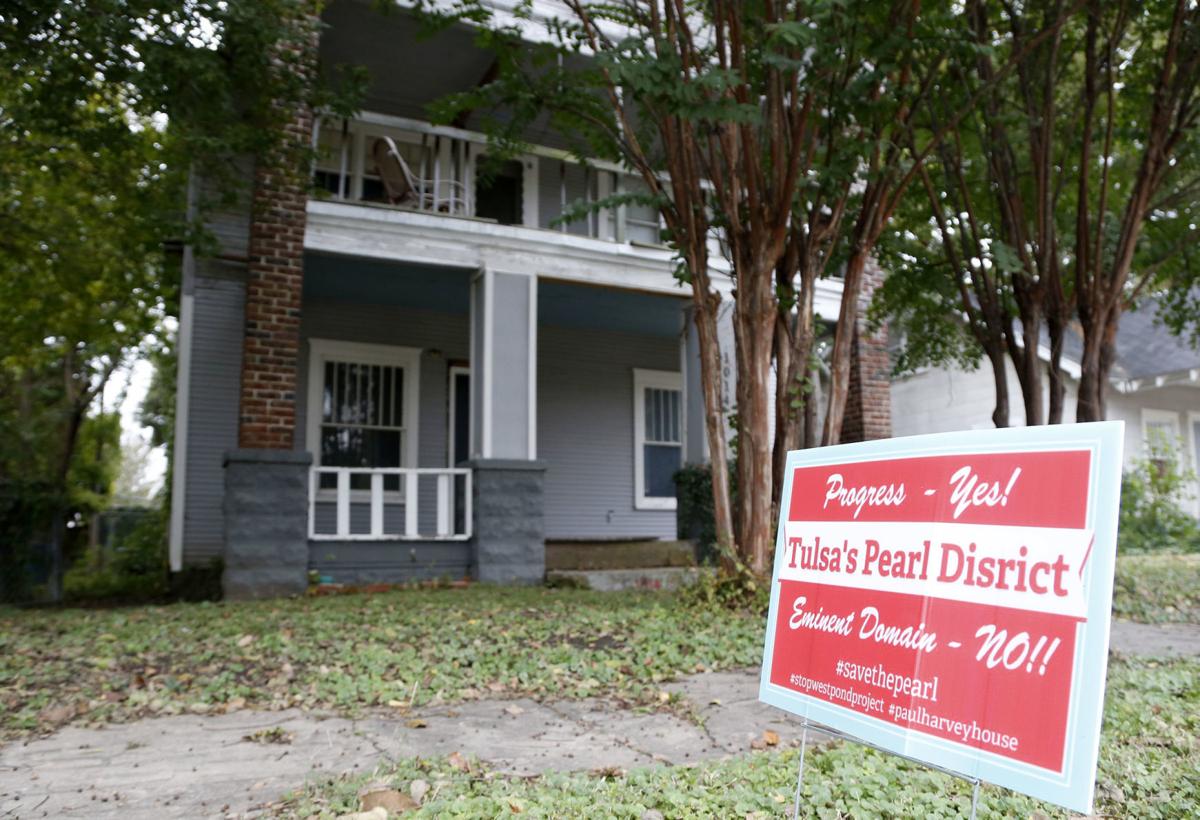 A Pearl District group is using a #paulharveyhouse hashtag while on a campaign to save homes in the area. Paul Harvey’s childhood home is shown in the background. STEPHEN PINGRY/Tulsa World 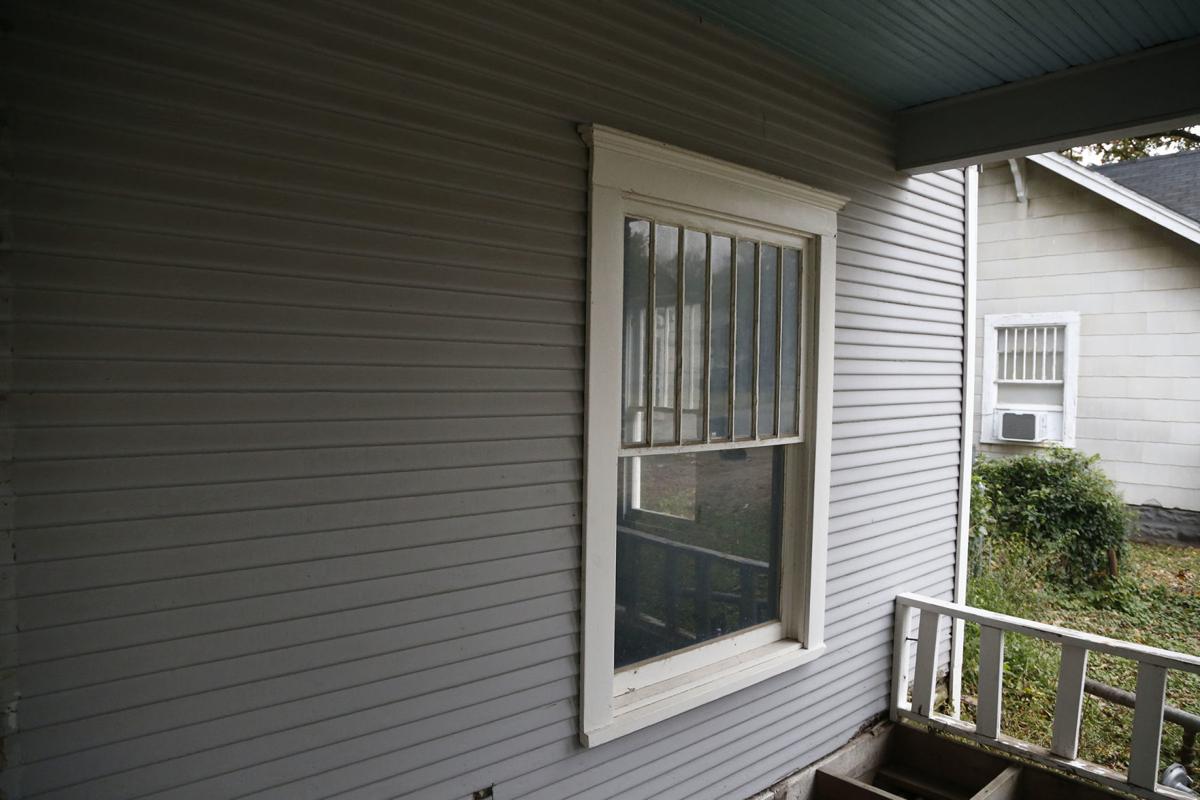 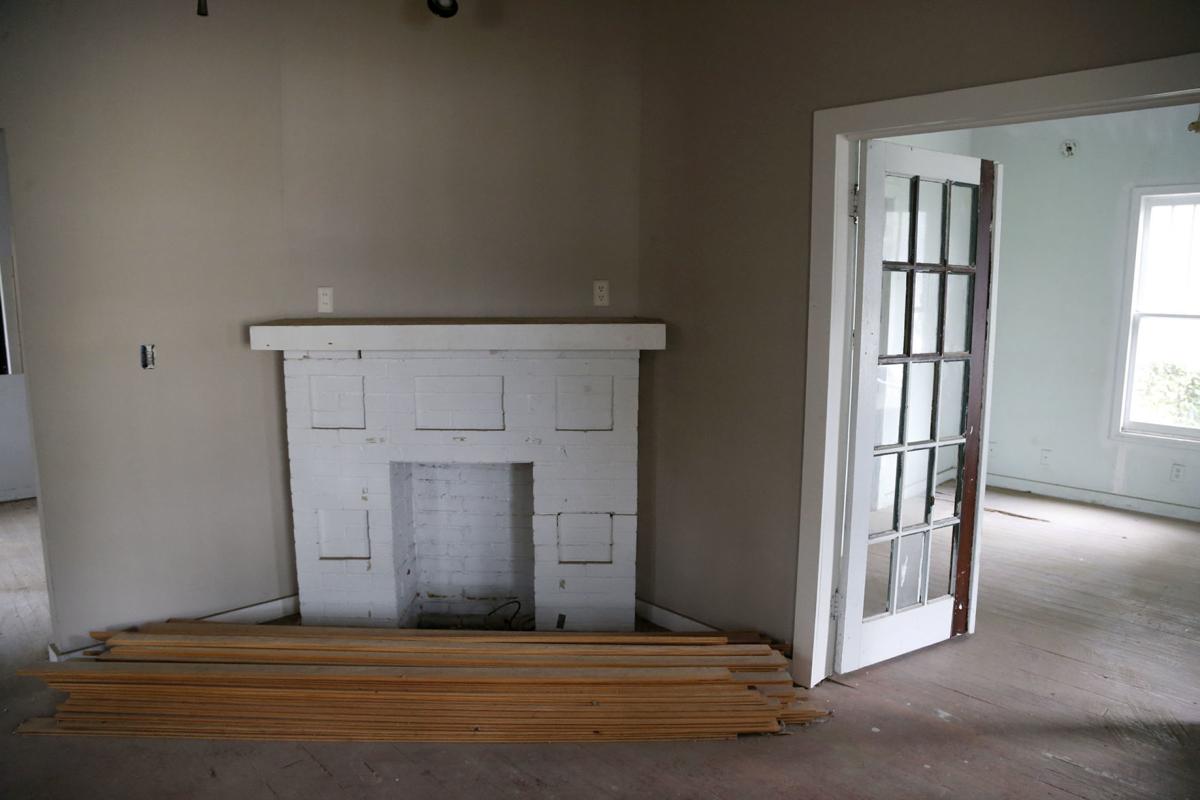 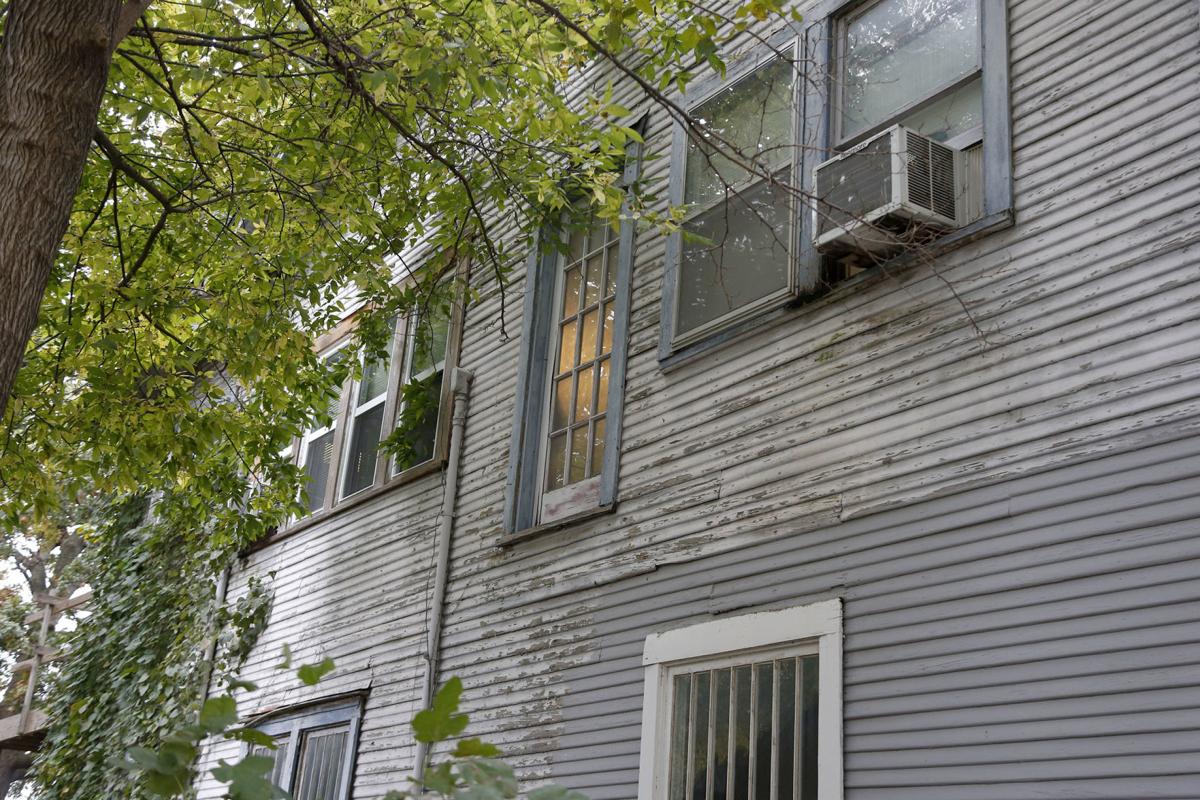 Steve Lee said he and family members used to pause what they were doing so they could hear what Paul Harvey was saying. It was gather-around-the-radio time.

“I grew up listening to him,” Lee said. “I love Paul Harvey. I made sure that I was listening at 12 o’clock every day.”

Harvey, who died 10 years ago at age 90, was a Tulsa-born radio legend with a unique delivery (“stand by for news!”) and a loyal following.

In 2005, he was awarded the Presidential Medal of Freedom, the United States’ most prestigious civilian award.

Now Lee wants to honor Harvey’s memory by preserving a slice of the broadcaster’s life.

Harvey grew up in a home at 1014 E. Fifth Place. Lee owns the property. He is worried the gray two-story home there will vanish from the landscape to make way for a planned detention pond in the Pearl District. The city is acquiring properties in the area in preparation for construction of the Elm Creek West Pond. The Harvey home is within the project’s footprint. A squad of appraisers showed up Monday.

“This isn’t about money for me,” Lee said. “I want to save the house, one way or another.”

It is Lee’s hope that the house can somehow, some way be saved because of historical value.

“You better think long and hard before you start tearing things down,” he said.

“If you tear down a tree, you can plant another tree and grow another tree, but you can’t build another Paul Harvey house. That’s a one-and-done thing. Be careful, in the name of progress, what you destroy.”

Because the Harvey house is at risk, opponents of the project are using it to garner support for their campaign. Yard signs have been placed in the area. The signs include the hashtags #savethepearl, #stopwestpondproject and #paulharveyhouse.

Lee’s preservation strategy includes allying himself with the neighborhood (he feels for others who have property in the area) and spreading the word about the home’s existence.

Records indicate Lee purchased the property in 2013. He had previously purchased the home next door with the intent of turning it into a rental property. One day he was chatting with the neighbors who lived at 1014 E. Fifth Place.

“They were telling me it was Paul Harvey’s house and they found his memorabilia in the attic, his Boy Scout manual,” Lee said.

Whatever happened to that stuff? It’s a question for the former residents.

“They left and I never saw them again,” Lee said.

When the Harvey house became vacant, a realtor stuck a “for sale” sign in the front yard. Lee said he bought the home the next day.

“I wouldn’t have bought it if it hadn’t been Paul Harvey’s house,” he said. “You couldn’t even tell that there was a house here. It was grown up. It was a jungle and we hauled stuff out of here for days. It was amazing. I didn’t know whether I was buying a liability or an asset, but I knew it was Paul Harvey’s house.”

The initials A.A. are etched in the front step at the home. Anna Aurandt was the name of Harvey’s mother.

Harvey was born Paul Harvey Aurandt in a house (presumably this one?) on East Fifth Place on Sept. 4, 1918. He grew up father-less there. He was 3 when his dad died.

Details: Off-duty police officers Harry H. Aurandt and Ike Wilkerson were shooting rabbits a mile east of Tulsa (now Admiral Place) in December of 1921 when they encountered a car full of mask-wearing gunmen. Aurandt was shot and died the next day. The shooters were convicted of murder in a trial in Pawnee County.

Anna Aurandt, left to provide for little Paul and another child, made ends meet by opening her home to roomers during the Depression.

During a recent tour of the home, Lee pointed to an exterior upstairs door where stairs were built to allow boarders to access rooms without entering downstairs.

Lee, who has done his Harvey homework, said he read a book that indicated Harvey was self-conscious about his environment. Friends and peers at Central High School (where Harvey is in the Hall of Fame) lived in better neighborhoods and houses. Meanwhile, Harvey’s home was plain and housed boarders.

“I was a poor boy. Nobody told us we were poor, but it was apparent to me we didn’t live in the same style as some of the families,” Harvey told the Tulsa World’s Wayne Greene in 1990.

A teacher (identifed by Harvey as Mrs. Harp) gave him this advice: “Paul, never resent those who have more than you. Just do everything you can to make sure this remains a nation where a man willing to stay on his toes can reach for the stars.”

Harvey’s voice made him a star. He began an announcing career at Central High School. One of his teachers, Isabell Ronan, led him to KVOO and purportedly told the station manager, “This boy needs to be in radio.” He continued working at the station while attending the University of Tulsa.

You know the rest of the story.

Just to be clear, understand that Lee does not live in the Harvey home. He has a residence elsewhere in Tulsa.

The lower level of the Harvey home, in a state of transformation, is in no shape for tenants. But a tenant lives in the upper level, which has been spruced up enough that there’s a bit of a “wow” factor in comparison to the rest of the property.

The Harvey home and the neighborhood have experienced better days, but Lee points out that improvements have been made to the home and he doesn’t want to go the full-fledged refurbishment route until he is certain of the home’s fate.

Mayor G.T. Bynum declined an offer to comment or provide a statement on the subject.

A Tulsa World story in September said the city has acquired 13 of the 45 properties it needs for the Elm Creek project. The story also said five sales are pending, including three that are in the eminent domain process.

In mid-October, City Councilor Kara Joy McKee said the city has paused eminent domain proceedings. The Tulsa World reported the decision was made after neighborhood meetings in which property owners expressed opposition to (and confusion with) an announcement that the city is moving forward with a long-standing plan to build a flood detention pond between Peoria Avenue and the IDL and Sixth and Fourth streets. You can read a Tulsa World editorial about the decision to hit the pause button here.

City Engineer Paul Zachary said in September the city uses eminent domain only if it cannot agree on a sale price with the property owner or if the property doesn’t have a clean title. He stressed that the process is not intended to be adversarial.

Could the footprint be tweaked to save the Harvey house? Never say never, but that’s not currently in the works.

Did this particular doomsday clock tick too far along before alarms went off? Getting the home verified and backed by historical groups might help with a reprieve, but Lee hasn’t gone that route yet. He’s open to suggestions for saving the home and perhaps restoring it.

“A historic house like this, it could be turned into anything,” he said

A runner, Lee said he was at the Chicago marathon and noticed a street sign that bore Paul Harvey’s name. It’s Lee’s opinion that Chicago (where Harvey moved in 1944) has done more to acknowledge Harvey than Tulsa. Lee said Harvey should get more “credit” here.

Harvey’s mother continued to live in his childhood home until her death in 1960. He returned to Tulsa to take care of her during her final days.

“That was when Tulsa again began to feel like home,” he told the Tulsa World in 1990.

Since the Harvey family relinquished the house, it has had eight owners or ownership groups. Lee could be the last.

“I think it will be saved,” he said, adding that there are enough people who remember Harvey and appreciate Tulsa’s history.

Stand by for news?

Rose Byrne explains why she and Bobby Cannavale have never married

Rose Byrne explains why she and Bobby Cannavale have never married

This year's Juneteenth will be a five-day event, beginning with the showing of the film "Summer of Soul (Or, When the Revolution Could Not Be Televised)," 7:30 p.m. Wednesday, June 16, at the Circle Cinema.

The team will be wearing the new jerseys for its June 19 game against Louisville.

Johnson admitted he isn't sure if he has "the patience" for the role, but he was flattered to discover that 46 percent of Americans would back him for the White House.

The initials “A. A.” on the front step of Paul Harvey’s childhood house are presumably those of his mother, Anna Aurandt. STEPHEN PINGRY/Tulsa World

Paul Harvey would have looked out these windows as a child. He grew up in a home at 1014 E. Fifth Place. STEPHEN PINGRY/Tulsa World

A Pearl District group is using a #paulharveyhouse hashtag while on a campaign to save homes in the area. Paul Harvey’s childhood home is shown in the background. STEPHEN PINGRY/Tulsa World