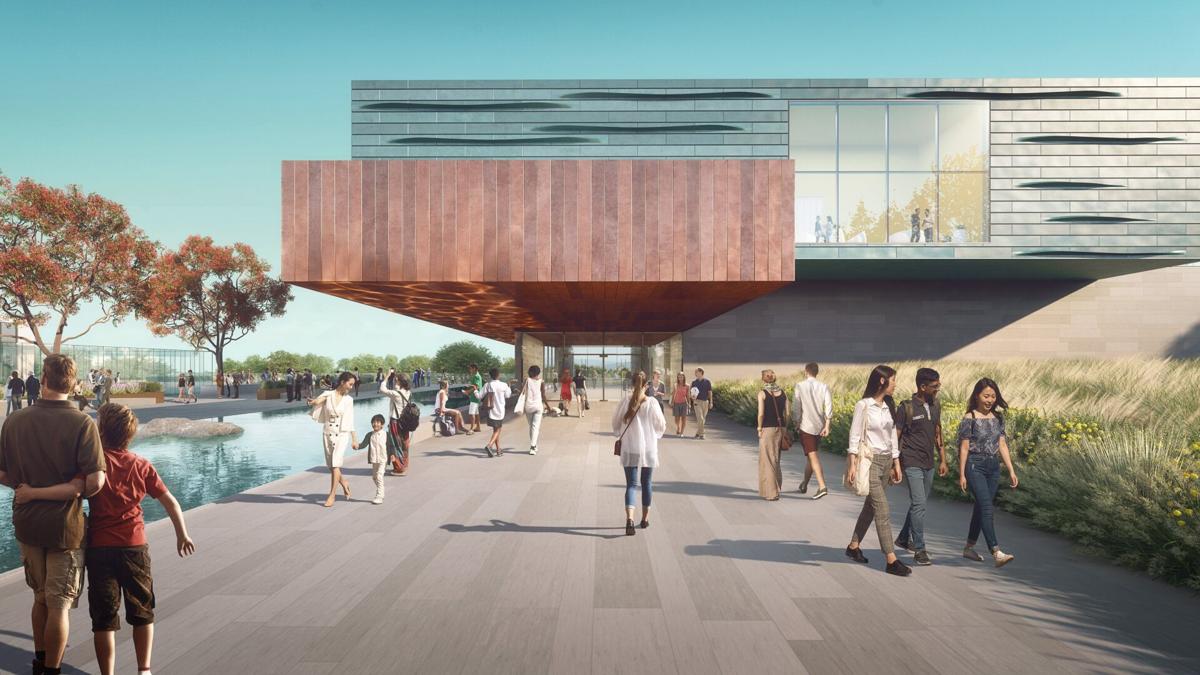 An artist’s rendering shows the view from the east for the visitors’ approach to the new Gilcrease Museum. The concept is to appear as if the museum is reaching out to welcome visitors. 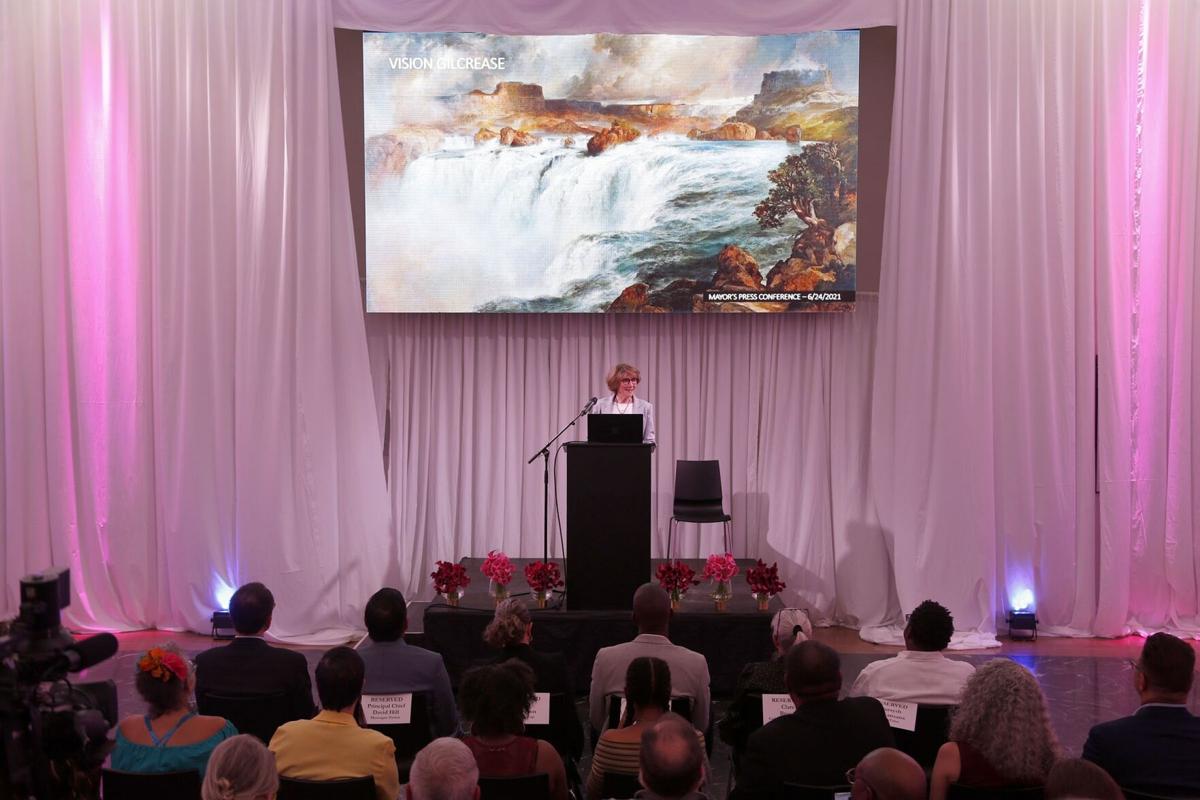 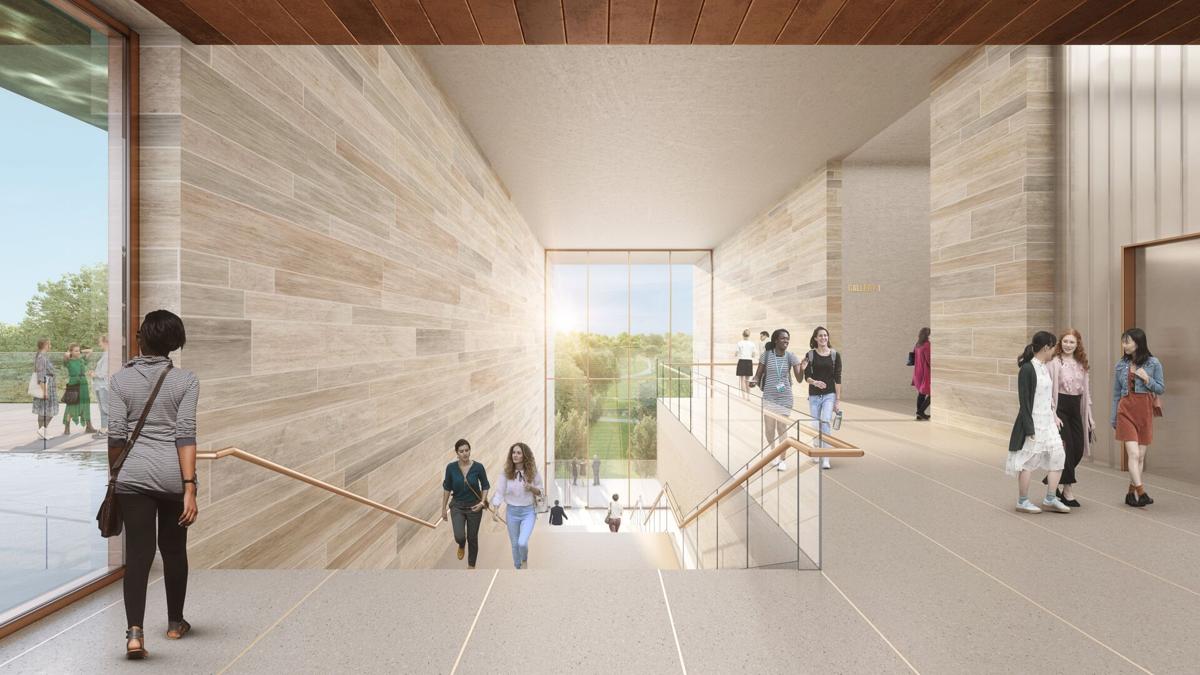 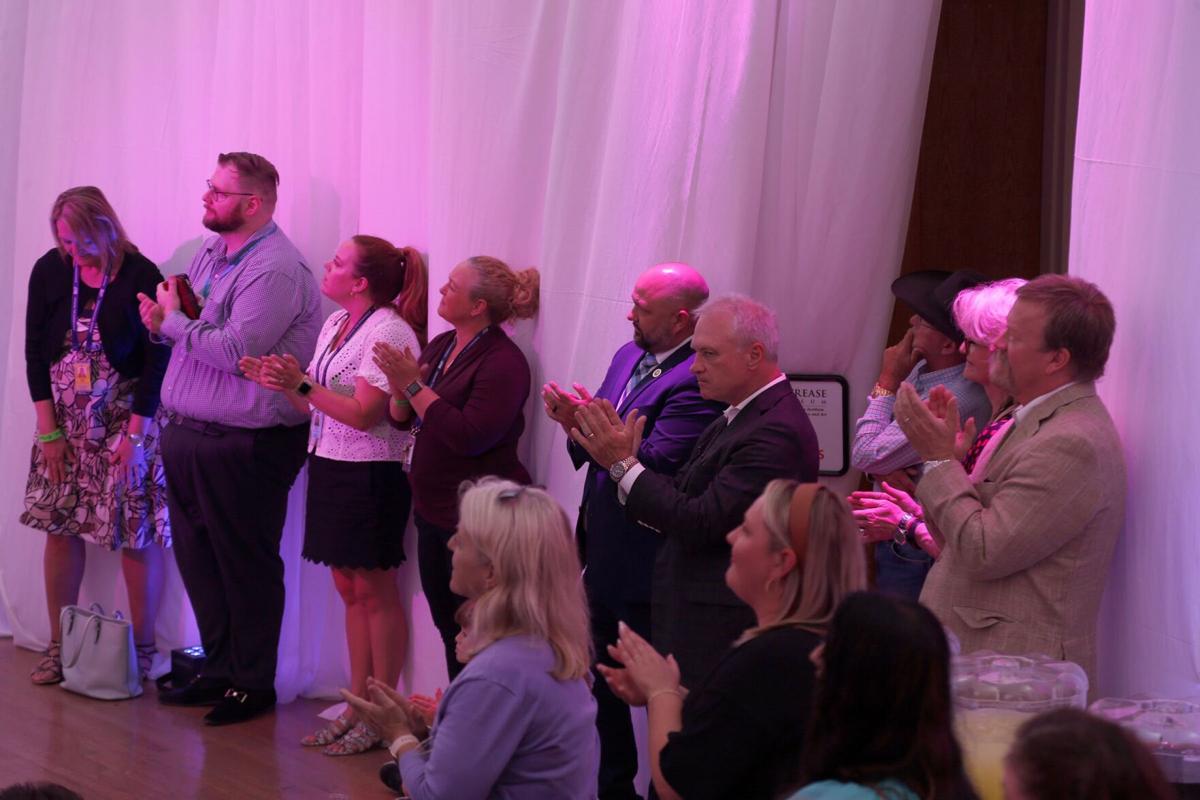 People cheer after seeing the rendering of the new Gilcrease Museum that will be built in place of the old one. 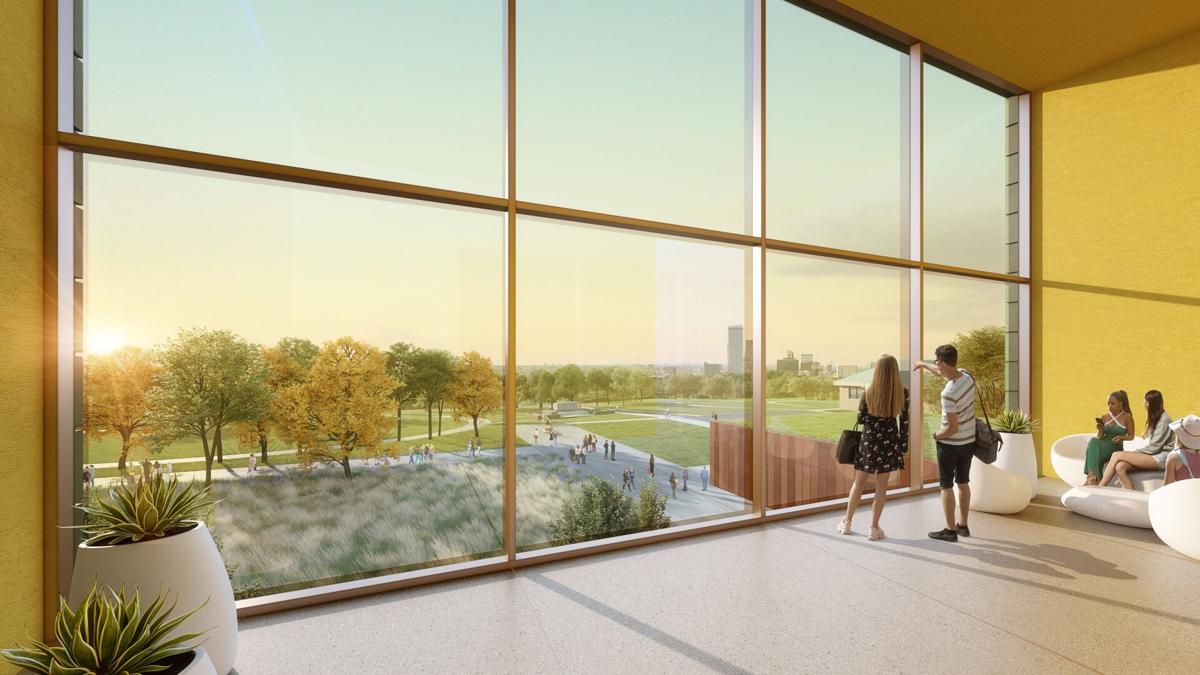 An artist rendering shows plans for the new museum's sun court, a space for reflection that frames a view toward the Gilcrease Mausoleum, north Tulsa and downtown. 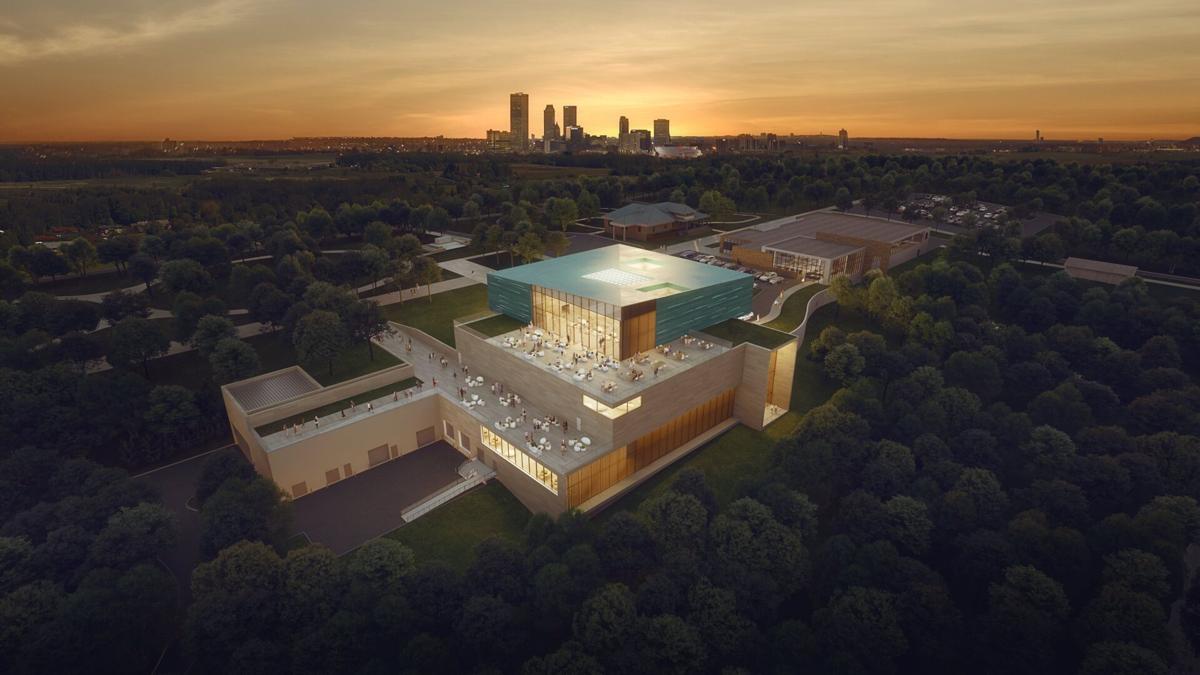 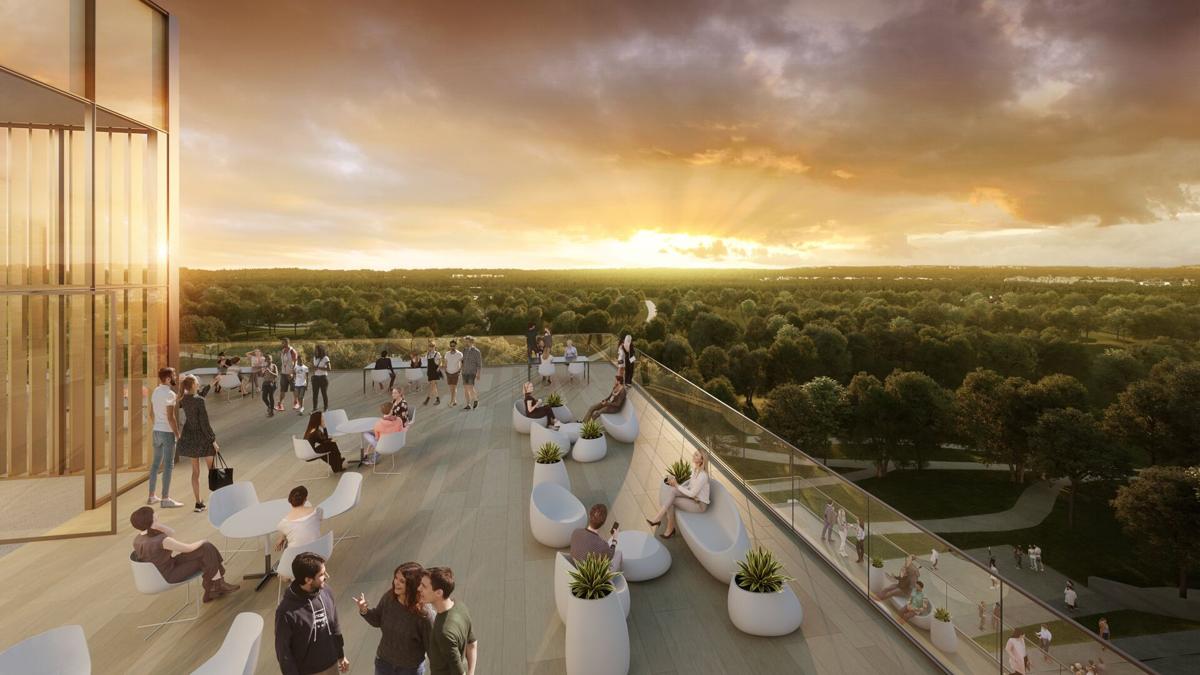 An artist rendering of the new Gilcrease Museum shows off the Osage Hills view from a roof terrace. 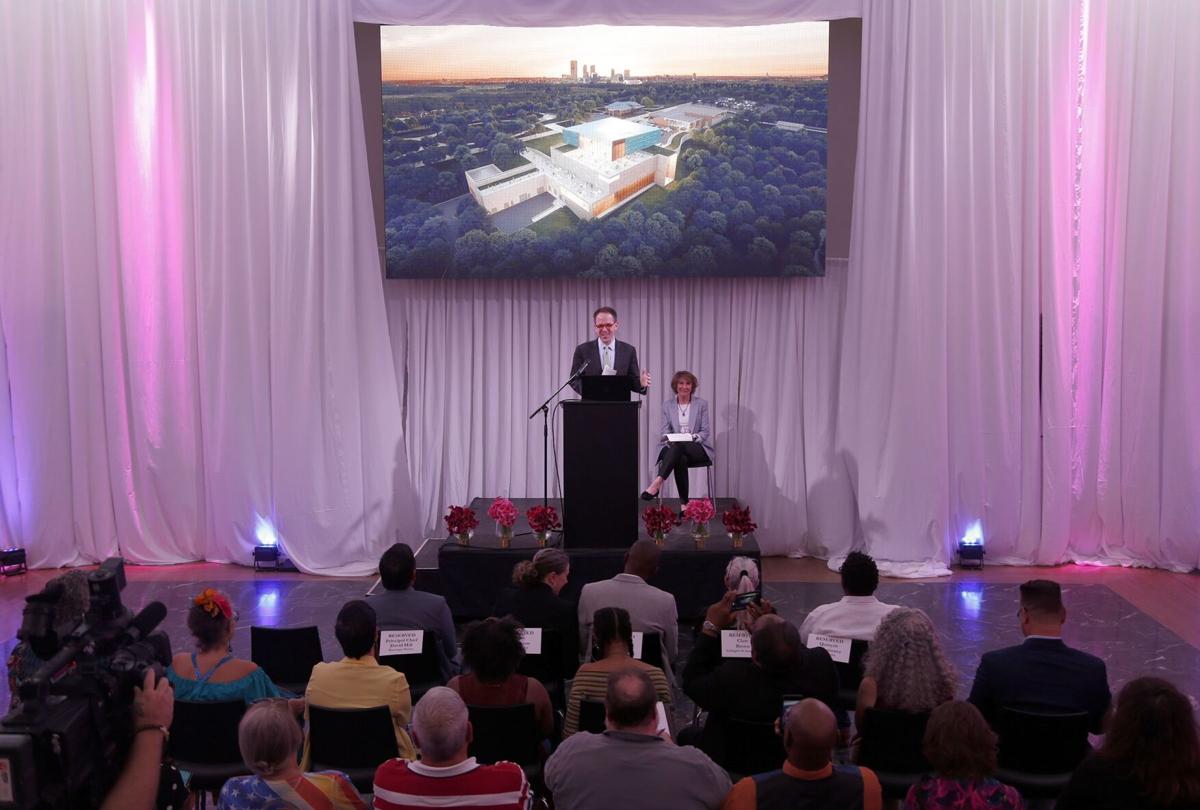 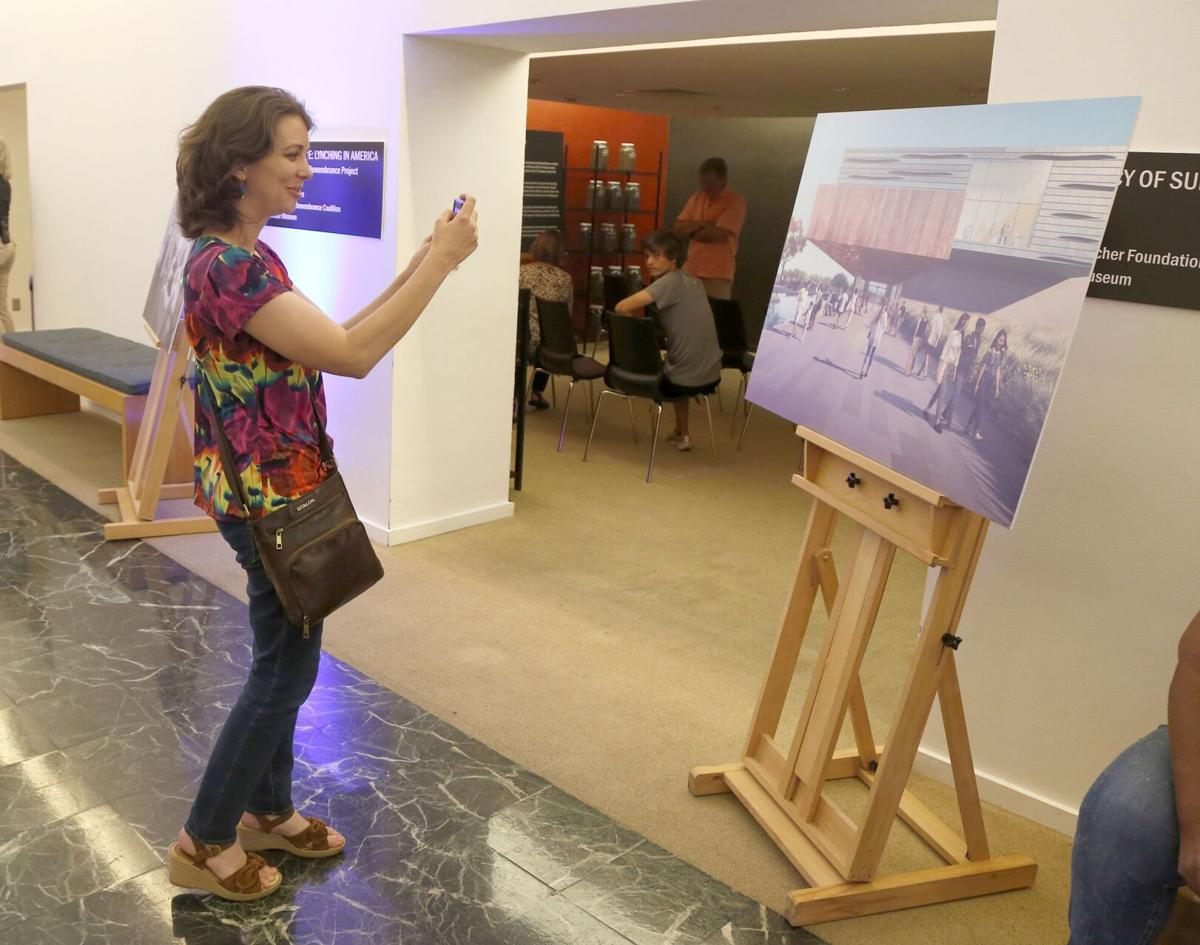 Tara Rittler takes a photo of a rendering of the new Gilcrease Museum that will be built in place of the old one. 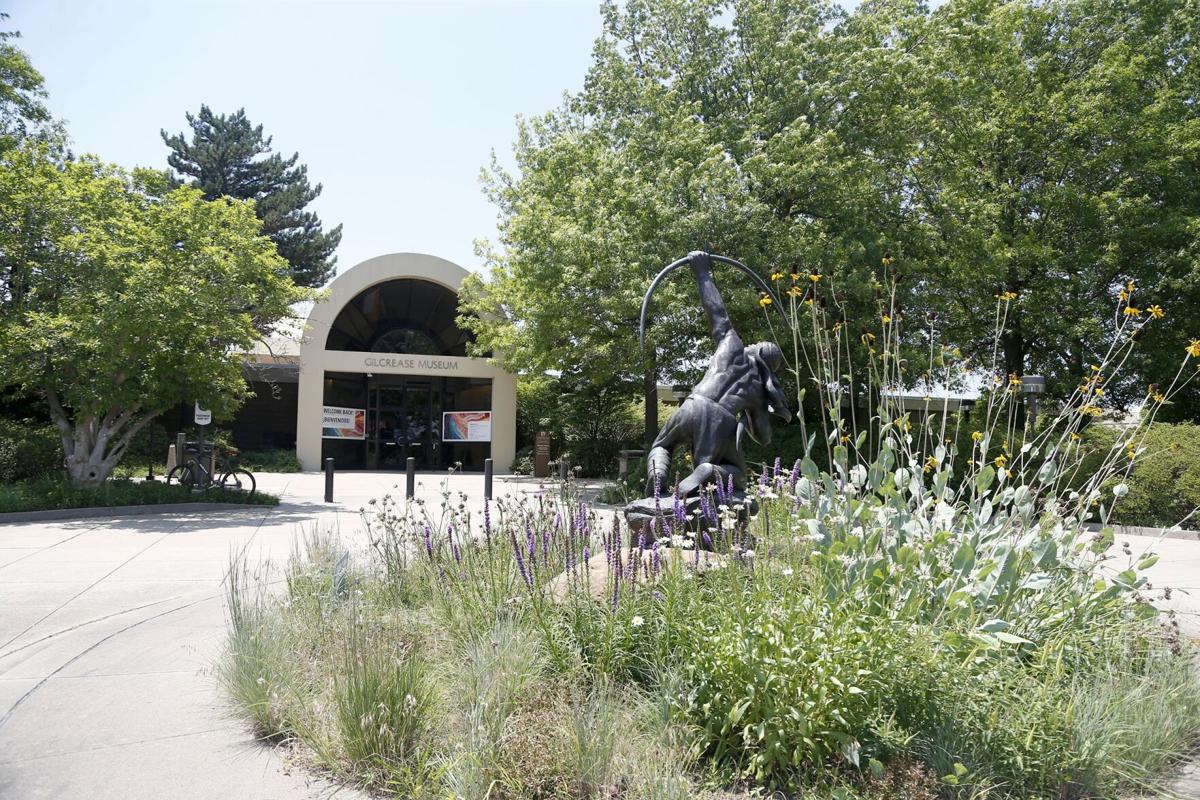 The current Gilcrease Museum entrance. The museum will close July 5 and will be razed to make room for the new museum, expected to be completed by late 2024.

For an institution known for its preservation of America’s past, the plans revealed Thursday for the new Gilcrease Museum are for a facility that is very much of the 21st century.

Museum and city officials revealed elements of the new building at a press event Thursday in Helmerich Hall of the museum, an area that was added on as part of the museum’s 1963 renovation.

The new museum, a 83,500-square-foot facility envisioned by the international design firm SmithGroup, will offer an improved visitor experience and state-of-the-art exhibition space that meets today’s standards for care of priceless collections of art.

Susan Neal, the museum’s executive director, said that when work began on determining the best course of action for the future of Gilcrease, it quickly became apparent that the building in its current state — an amalgam of additions and expansions dating back to 1949 — was not in a condition to be renovated further.

That collection, which Mayor G.T. Bynum referred to as “the largest collection of American art and history that is not owned by the government,” spans more than 350 years of American painting and sculpture, including a comprehensive collection of Indigenous works from 12,000 BCE to the 21st century; and more than 100,000 manuscripts, photographs, maps, rare books and other material related to the history of the Americas from the 15th to the 20th centuries as part of the Helmerich Center for American Research.

Ivan O’Garro, SmithGroup’s lead designer for the project, said the main principle behind the design of the new museum was “reconnecting man to nature.”

One of the ways of doing that was to draw from the traditions of the Osage Nation, as the museum’s campus lies within the Osage Nation boundaries. O’Garro said the museum’s design follows the idea of the four cardinal directions (north, south, east, west) equate with natural elements and experiences (sky, earth, day, night).

For the museum’s color palette, O’Garro said the team was inspired by the colors of Tulsa itself.

“We have an Earth palette, in which everything that touches the ground will have an earth color, and a Sky palette, which echoes the bluish patina you see on some of the Art Deco buildings in the city,” he said.

O’Garro added that one of the “true jewels” of the Gilcrease collection is the land within which is sits, and the new museum will offer multiple ways to experience the “Great American Landscape” that surrounds the museum and grounds, including an east-facing Sun Court that will look out over Gilcrease Hills and downtown Tulsa, and an open, upper-level patio area that will face west.

The new gallery spaces within the museum also allow for new ways of presenting the Gilcrease permanent collection, The internationally recognized Gallagher & Associates, a firm that specializes in museum design whose clients include the Woody Guthrie Center, has worked with the Gilcrease curatorial team to utilize the collections to tell a richer, more nuanced story of American history and culture, making use of state-of-the-art technology and other interpretative tools. In addition, the museum will be better able to house large touring exhibitions that ordinarily would not have come to Gilcrease.

Clare Brown, with Gallagher & Associates, said the new galleries would allow people to “explore the collections from multiple perspectives, to find direct connections to their own lived experiences.”

That includes, added Quraysh Ali Lansana, a member of the museum’s Community Advisory Board, the people who live in the immediate neighborhood of Gilcrease.

“There is a huge Black population that I know drive by Gilcrease Museum every day, and they have no idea what is in here,” Ali Lansana said. “I am pleased that Gilcrease is reaching out to the community, and is paying serious attention to issues of diversity and inclusion. It is critical that people see themselves in this museum, because all our narratives (as Americans) begin here.”

O’Garro said the entrance into the new museum was designed to “reach out” into the grounds, to create a more welcoming atmosphere. In addition to a new building, the Gilcrease campus will include more than 13 miles of new walking/bike trails that will ultimately connect with trail networks throughout the city.

“Gilcrease and its collection are deeply rooted in the history of Tulsa and also reveal national and international narratives that continue to touch our daily lives,” Neal said. “Perhaps now more than ever, it is vitally important that we share these stories with as broad an audience as possible to help us better understand ourselves and one another, as well as introduce a new generation of visitors to the museum. The new Gilcrease will allow us to do just that.”

Gilcrease Museum will close to the public July 5, and groundbreaking for the new building will likely take place in winter 2022. Construction of the new Gilcrease Museum is expected to be completed by the end of 2024.

The new Gilcrease is funded through a combination of public and private sources. The city of Tulsa is contributing $65 million approved by voters as part of Vision Tulsa. The A.R. and Marylouise Tandy Foundation has provided a lead gift of $10 million for the new Gilcrease. The museum will continue to raise additional funds for the implementation of its master capital expansion plan and endowment.

Gilcrease Museum will continue to develop a variety of off-site or virtual programs for the entire community during construction of the new building. More information on these programs will be announced in the coming months.

Gilcrease Museum will have on display through July 4 the exhibit "Enslavement to Emancipation: Toward a More Perfect Union," which brings together for the first time three foundational documents from the museum’s archival collection: a letter sent in 1520 by Christopher Columbus’ son to the King of Spain requesting permission to begin bringing enslaved Africans to the Western Hemisphere; a rare, certified, handwritten copy of the Declaration of Independence; and an authorized copy of the Emancipation Proclamation. The exhibition culminates in a video discussion between Tulsa historian, writer, and attorney Hannibal Johnson and Gilcrease Museum Curator of History Mark Dolph that places the three historic documents in a contemporary context.

Gilcrease Museum will host a “community celebration” from 11 a.m. to 5 p.m. Saturday to thank Tulsa area residents for their longstanding support with free museum admission, entertainment, food trucks and family activities on the museum grounds.

The event is a family picnic-style celebration before the museum temporarily closes July 5 in preparation for the demolition of the current museum and the construction of a new museum building anticipated for completion by fall 2024. In the interim, the museum will continue to host pop-up art and education experiences throughout the community.

“We’re excited to begin this new stage in the museum’s life, and we want to thank Tulsans for their incredible support over the years by inviting the community back to make one more Gilcrease memory and see some of their favorites from the collection,” said Susan Neal, executive director of Gilcrease Museum.

Guests are invited to bring picnic blankets, chairs and their own food or purchase from a variety of food trucks on site. The day of family activities will include circus performers, a chalk artist, drummers, belly dancing and activity books for families. Visitors also will have a chance to see an official handwritten copy of the Declaration of Independence.

In addition, the celebration will feature an opportunity for the public to get a close-up look at the architectural concept renderings for the new Gilcrease museum building.

Music for the day will include live music on stage, including:

The north and Brannin (south) parking lots at the museum will be open. Overflow parking will be available at Central High School, 3101 W. Edison St., and complimentary shuttles will be available.

Uma Thurman reveals she had an abortion as a teen

Uma Thurman reveals she had an abortion as a teen

An artist’s rendering shows the view from the east for the visitors’ approach to the new Gilcrease Museum. The concept is to appear as if the museum is reaching out to welcome visitors.

People cheer after seeing the rendering of the new Gilcrease Museum that will be built in place of the old one.

An artist rendering shows plans for the new museum's sun court, a space for reflection that frames a view toward the Gilcrease Mausoleum, north Tulsa and downtown.

An artist rendering of the new Gilcrease Museum shows off the Osage Hills view from a roof terrace.

Tara Rittler takes a photo of a rendering of the new Gilcrease Museum that will be built in place of the old one.

The current Gilcrease Museum entrance. The museum will close July 5 and will be razed to make room for the new museum, expected to be completed by late 2024.