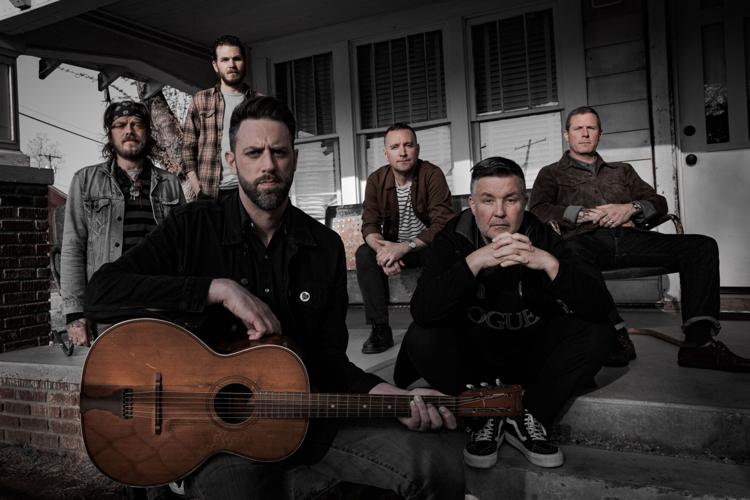 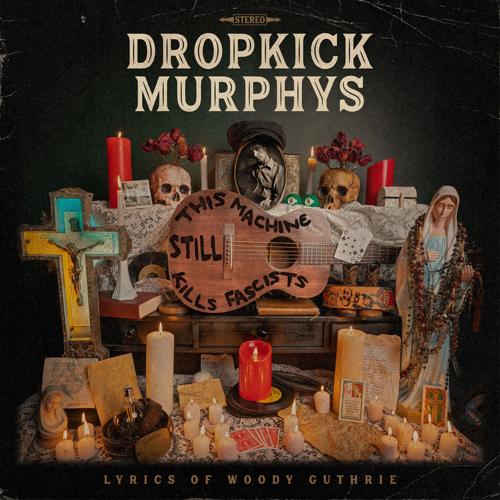 “This Machine Still Kills Fascists” is an upcoming album from Dropkick Murphys. 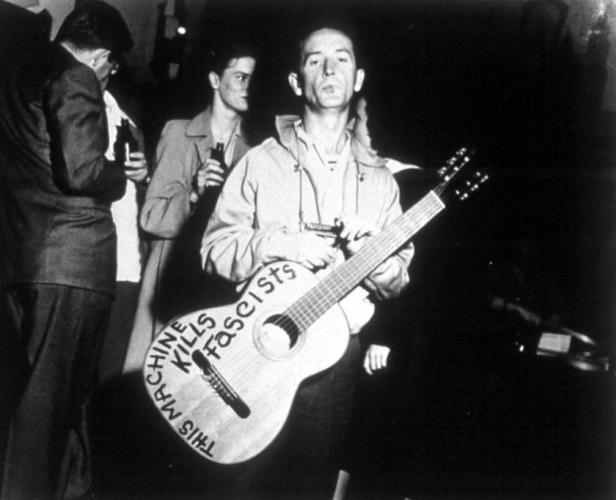 Woody Guthrie’s guitar was branded with the words “This machine kills fascists.” 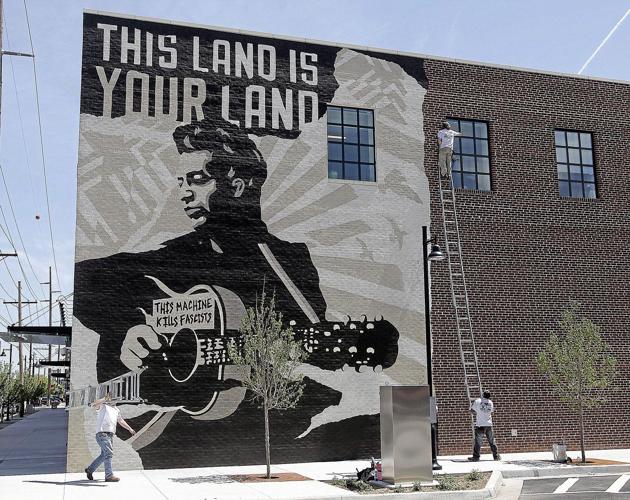 A Celtic punk band formed in Massachusetts is releasing one of the most Tulsa albums ever.

Tulsa is home to the Woody Guthrie Center. Dropkick Murphys is channeling Guthrie on “This Machine Still Kills Fascists,” an acoustic album which will arrive digitally and on CD Sept. 30 and on a special vinyl edition in November. A news release said the 10-track album will bring Guthrie’s “jabs at life” — many of which are from the 1940s and 1950s — into the present “with the resulting music eerily relevant to today’s world.” Watch here for an album trailer.

The album was recorded with longtime producer Ted Hutt at recently renovated and reopened Church Studio, a Tulsa church that Leon Russell transformed into a Shelter Records HQ and workshop in the early 1970s.

Press materials for the new album included a group photo of the band taken in front of the Outsiders House Museum. The property at 731 N. Saint Louis Avenue served as a “greaser” home during the making of the 1983 shot-in-Tulsa film “The Outsiders.”

Dropkick Murphys will embark on its first reserved seating theater tour in support of the album. The tour will include a Nov. 1 show at Tulsa Theater. Tickets for most tour stops go on sale Friday, June 24 at dropkickmurphys.com.

The idea for the album, unlike anything Dropkick Murphys has ever done, has been percolating for more than a decade with Guthrie’s daughter, Nora, curating a collection of her father’s never-published lyrics for the band.

“The project has been a long time in the making,” Dropkick Murphys founder Ken Casey said. “Nora Guthrie thought her father would’ve got a kick out of us, would’ve liked us, that we were somewhat kindred spirits, so to speak, which to us was a huge honor.”

The challenge was finding the right time to tackle the project. When co-lead vocalist Al Barr took a leave of absence in late 2021 to care for his ailing mother, the band was apprehensive about making a “normal” album, according to a news release, which made it the perfect time to go Guthrie. The release called the album the fruition of like-minded, rebellious artists collaborating, albeit nearly a century apart.

Said the release: “Woody Guthrie wrote songs from the heart and for the common person. He made a point of showing up when it counted most, often performing at fundraisers, benefits and rallies to champion working class causes and condemn greed, war and unchecked capitalism — all with his guitar in hand.

“This is exactly where Woody Guthrie and Dropkick Murphys intersect. Dropkick Murphys’ entire ethos of family, community, service and action depends upon honest reporting in their music. Like Woody, showing up in real life is what makes their songs so impactful. They just are who they say they are. Whether it’s standing up to Nazi thugs or standing with working men and women on a picket line, showing up is what holds the center in DKM’s world.”

“He went against the grain, he fought the good fight, he spoke up and sang about his beliefs,” Casey said. “I’m motivated by reading what he wrote and am inspired by his courage. One man and a guitar — it’s powerful stuff.”

The album title reflects what Guthrie began painting on his guitars in the early 1940s in the midst of World War II: “This Machine Kills Fascists.”

Dropkick Murphys venturing into Guthrie territory is nothing new. Dropkick Murphys covered Guthrie’s “Gonna Be A Blackout Tonight” on a 2003 album, “Blackout.” A few years later, Casey found scribbled lines about Boston in the Guthrie archive. Guthrie’s words about the band’s hometown found their way into “I’m Shipping Up To Boston,” a track on the 2005 album “The Warrior’s Code.”

The first single — “Two 6’s Upside Down” — and video from the new album will debut July 6. While in Oklahoma to record the album, members of Dropkick Murphys visited Guthrie’s hometown of Okemah and walked the streets he walked.

“Retreating to Woody’s home state of Oklahoma to record the album had a powerful effect on the band and the creative process behind these songs,” said the news release.

Dropkick Murphys dove into so much material based on Guthrie’s lyrics that a second volume will be released in 2023.

“Today, things need to be said front and center, loud and clear,” Nora Guthrie said. “No time for subtleties, no time for whispered words or guarded statements. When you need a megaphone to say what you mean, and mean what you say, call Dropkick Murphys. I did...”

“I collected lyrics on all kinds of topics, lyrics that seemed to be needed to be said — or screamed — today. Ken Casey is a master at understanding Woody’s lyrics, which can be complicated, long, deadly serious or totally ridiculous. DKM is capable of delivering them all.”

Said DKM’s James Lynch: “Nora gave us the privilege of going through the archives and selecting some lyrics to use. The common thread that I see through everything was this love for people and this understanding of the universal truth that there is no one person fundamentally better than another person.”

The album track “Dig A Hole” features a full band performance wrapped around Woody’s rare Smithsonian Folkways recording about World War II. Lead singer Ken Casey essentially duets with Guthrie. Quest contributed Dobro guitar and backing vocals to “Dig A Hole.” Quest also plays on “The Last One,” which has guest vocals from Felker, who is from the same town (Okemah) as Guthrie.

The Last One (feat. Evan Felker of Turnpike Troubadours)

Where Trouble Is At

Ramona Reed first performed on the Grand Ole Opry when she was 17. She made appearances as Martha White on the Opry before joining Bob Wills and the Texas Playboys.

Native entertainers headline From the Rez and Beyond Festival

The Quapaw Nation's 150th annual powwow is on the horizon.

Was there anything real about Elvis Presley?

Presley never wrote a memoir. Nor did he keep a diary. His music could have been a window into his inner life, but he didn’t even write his songs.

Bestselling bands of the ’80s, then and now

Billboard charts from the 1980s were scoured for this list of 25 bands whose music was the soundtrack of the decade. Take a look at them then and now.

The longest-running Billboard No. 1 singles from the 1960s

Here's a look at the songs that spent the most weeks at the top of the charts between 1960-1969, according to the Billboard Hot 100 archives.

The “Mother of All Road Fests” began June 18-19 in Oklahoma City and will continue June 25-26 at SageNet Center on Expo Square.

Iconic one-hit wonders from the past 50-plus years

In celebration of the beloved “one and done” artists of the world, here's a look at some of the most iconic one-hit wonders of the past 50-plus years.

"Palladium" is the title track from the album.

“This Machine Still Kills Fascists” is an upcoming album from Dropkick Murphys.

Woody Guthrie’s guitar was branded with the words “This machine kills fascists.”