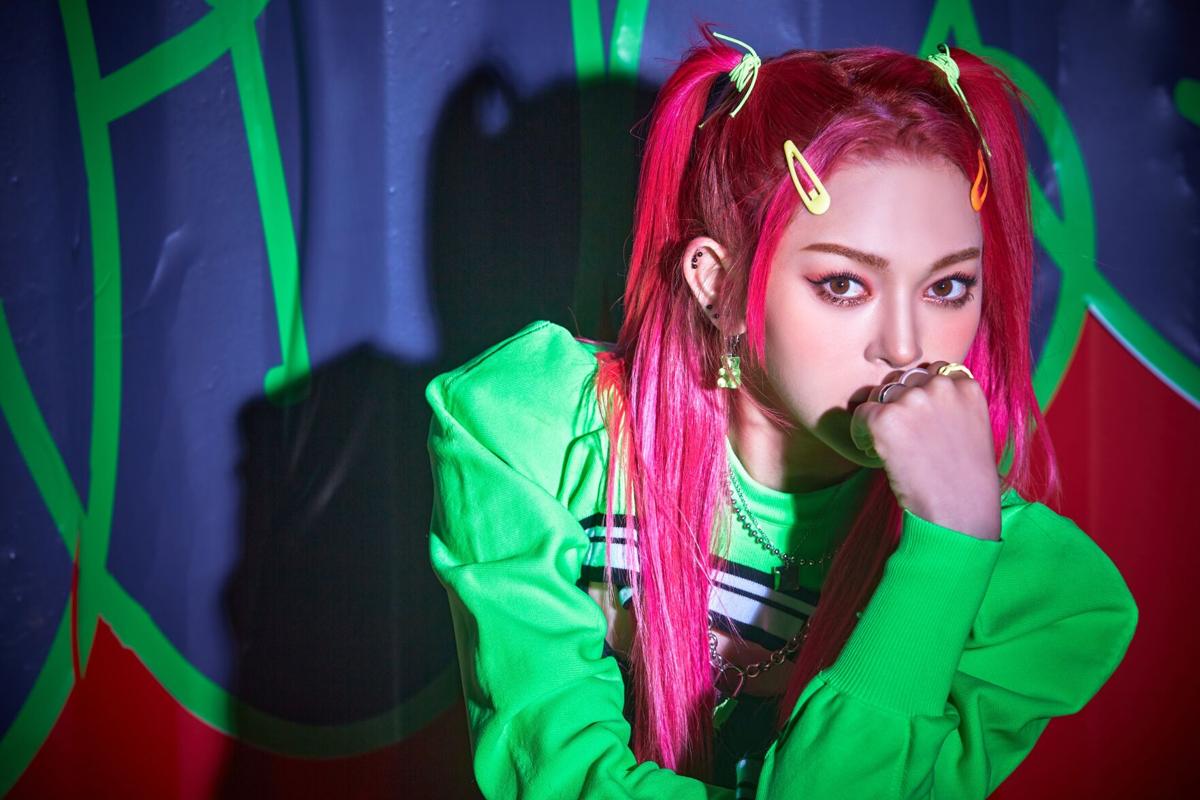 K-pop star AleXa is a 2015 graduate of Jenks High School.

K-pop music artist AleXa is a Jenks High School alum who was involved in theater and show choir as well as pom. 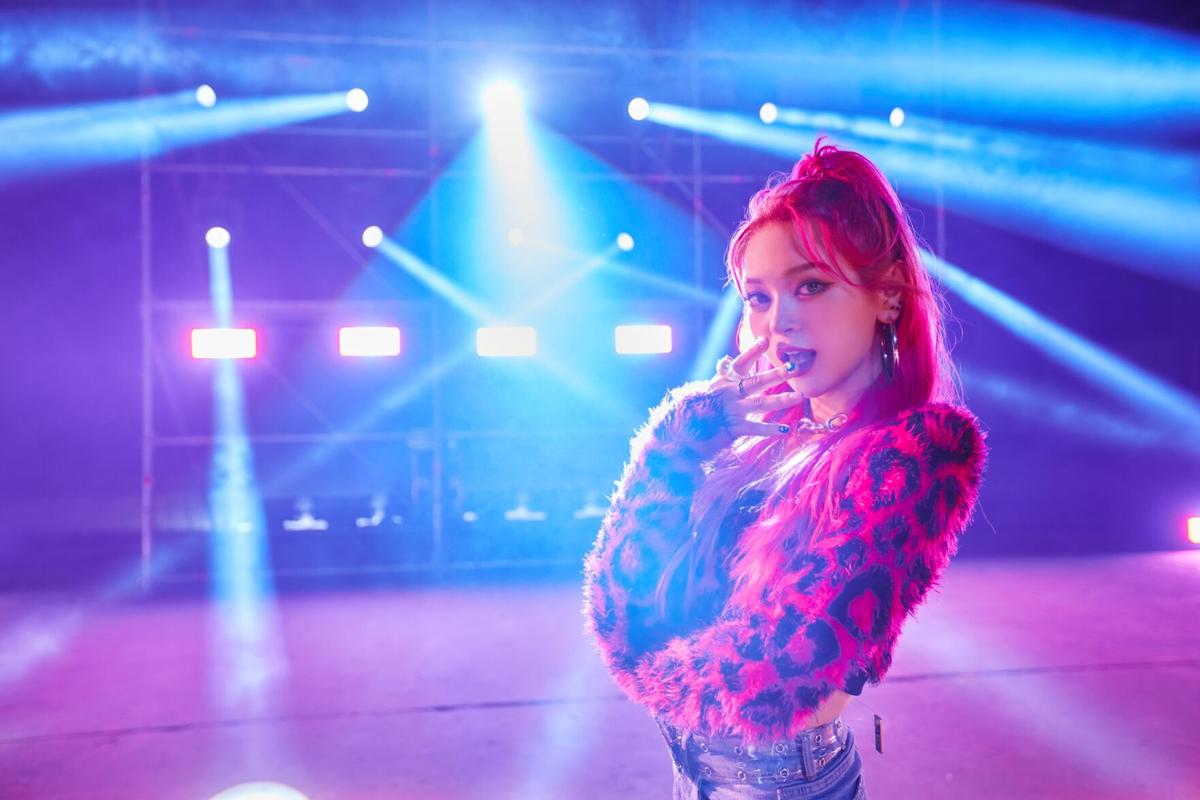 K-pop star AleXa, from Jenks, appeared on a billboard in Times Square.

Fans react to a performance at a 2019 K-pop awards show in Vietnam. AleXa, a K-pop artist from Jenks, performs the genre known for its exciting visuals and choreography.

AleXa is a K-pop star whose debut video accrued five million views in its first week of release.

Some of you may have this question: What’s K-pop?

AleXa has your answer: “In layman’s terms, K-pop is Korean pop music! I know the thought of listening to music in another language may be strange to others, but it’s more than just the music — it’s the visuals, the choreographies, the music videos, the performances. K-pop is just this delightful little multilayer cake and I encourage everyone to try a slice.”

What kinds of activities/groups were you involved in at Jenks that helped prepare you for what you are doing?

“When I first transferred to Jenks, I joined the Tulsa Dance Force, which was an extension of the Jenks cheer n’ pom team. In eighth grade, I officially joined the Jenks pom team. My freshman year I was on the JV squad and my sophomore year I was on varsity. I quit pom after sophomore year, however, because I became heavily involved in the theatre program as well as show choir. I made the roster for Trojanaires my sophomore year and stayed in show choir through my senior year. I did a handful of stage productions, both on stage and behind the scenes, for the theatre and musical department. Big shout out to Mrs. Boudiette, Mr. Hurst, Mrs. Hester and Mr. Downey for helping me along on my journey.”

When did you first learn about K-pop and at what point did you decide it might be a career path for you?

“I learned about K-pop through my best friend way back in 2008. I’ve always had an affinity for the stage and performing, so upon discovering K-pop, the dream of becoming an artist came to be.”

In your opinion, does K-pop have much of a following in Tulsa? (Editor’s note: Tickets have sold out for Tulsa K-pop Fanmeet 2021, a Saturday, July 10 event at Owasso Community Center for those who love K-pop).

“Back when I first got into K-pop, there weren’t many other people that I knew of who were fans. However, I know that the community has grown substantially since I left Tulsa.”

Did you immediately pursue a K-pop career or did you attend college and join the workforce?

For someone who grew up in Jenks, it seems like a long shot to “get there” as a K-pop artist. How did you get it accomplished?

“Anything is possible, no matter where you’re from. There are a few other people who came from small towns in Oklahoma that have ‘made it’ (like Bill Hader! James Marsden!) so to say, and I take a little bit of pride in the fact that I’m on my way! I wouldn’t say that I’ve ‘gotten there’ yet, but I’m working my hardest to one day be on that level.”

You posted on social media that you appeared on an ad in Times Square.

“Talk about a dream come true! Never in my wildest dreams did I ever imagine being featured on a billboard, let alone in Times Square. The ‘Is It On’ (collaboration with Kuwaiti-Saudi artist Bader Al Shuaibi) has led to so many wonderful things, the billboard being a major one. Forever thankful for everyone who made it possible! Spotify RADAR & Warner Music, I’m lookin’ at you.”

How big of a deal was it that you recently co-hosted and performed at the K-pop Superfest?

“I was honestly so excited to not only perform, but also co-host Joy Ruckus Club’s K-Pop Superfest. Getting to perform is always a blast, and for this festival we had a worldwide global audience, which was very exciting! I’m was kind of nervous to be co-hosting, but thanks to the wonderful energy from the fans and my co-host, it went smoothly.”

What part of your story should we know that hasn’t been asked about?

“There’s not much to say that hasn’t already been said, but I would like to add that should the day ever come, I’d love to perform at the BOK Center someday.”

You can watch one of AleXa’s videos here.

The daughter of a Korean adoptee, AleXa, was born and raised in the Tulsa area and attended high school in Jenks.

A lifelong dancer, AleXa competed in Soompi’s “Rising Legends,” where nearly one million fan votes determined her the winner.

Shortly after being signed to ZB Label, she beat out thousands of contestant hopefuls and was one of the 96 chosen to participate in Mnet’s “PRODUCE 48,” the most competitive audition show in Korea.

AleXa exploded onto the scene with her multilingual debut, “Bomb,” in October of 2019, breaking into the Top 10 of Billboard’s World Digital Song Sales Chart within its first week of release.

In 2020, AleXa inked a deal with ICM Partners, home to an all-star roster of award-winning artists, including Nicki Minaj and Khalid, to set a global debut in motion, and was crowned the breakout winner in “Soribada Best K-Music Awards” and “Asia Artist Awards,” two of the biggest award shows of the season.

AleXa is set to appear in her first acting role on the second season of Netflix’s horror anthology series “Goedam” and most recently participated in Spotify’s cross-border collaborative single, “Is It On,” with Arabic singer Bader Al Shuaibi.

Here’s a sample of AleXa’s following, courtesy of her press kit:

Due to the recent spike of the COVID-19 delta variant and because the show is indoors, all attendees must be at least 12 years old with a photo ID and proof of vaccination. Tickets sold out in less than an hour.

Swinging history: Here's why Bob Wills continues to be celebrated at Cain's Ballroom

Bob Wills died in 1975, but Bob Wills' Texas Playboys continue to honor his memory by performing western swing music. The group, led by Grammy winner Jason Roberts, will soon be on stage at Cain's Ballroom.

Getting The Call: Most 'underrated' rock band of 1980s bound for Oklahoma Music Hall of Fame

Local author Knoel C. Honn has written a book about The Call, an Oklahoma-fueled, MTV-era band that accomplished big things and, according to Jim Kerr of Simple Minds, deserved to be bigger.

The festival will take place in September on Rocklahoma turf.

Eric Clapton said he won't perform at venues requiring COVID-19 vaccines after a UK announcement that vaccine passports will be mandatory at crowded venues.

K-pop star AleXa is a 2015 graduate of Jenks High School.

K-pop music artist AleXa is a Jenks High School alum who was involved in theater and show choir as well as pom.

K-pop star AleXa, from Jenks, appeared on a billboard in Times Square.

Fans react to a performance at a 2019 K-pop awards show in Vietnam. AleXa, a K-pop artist from Jenks, performs the genre known for its exciting visuals and choreography.