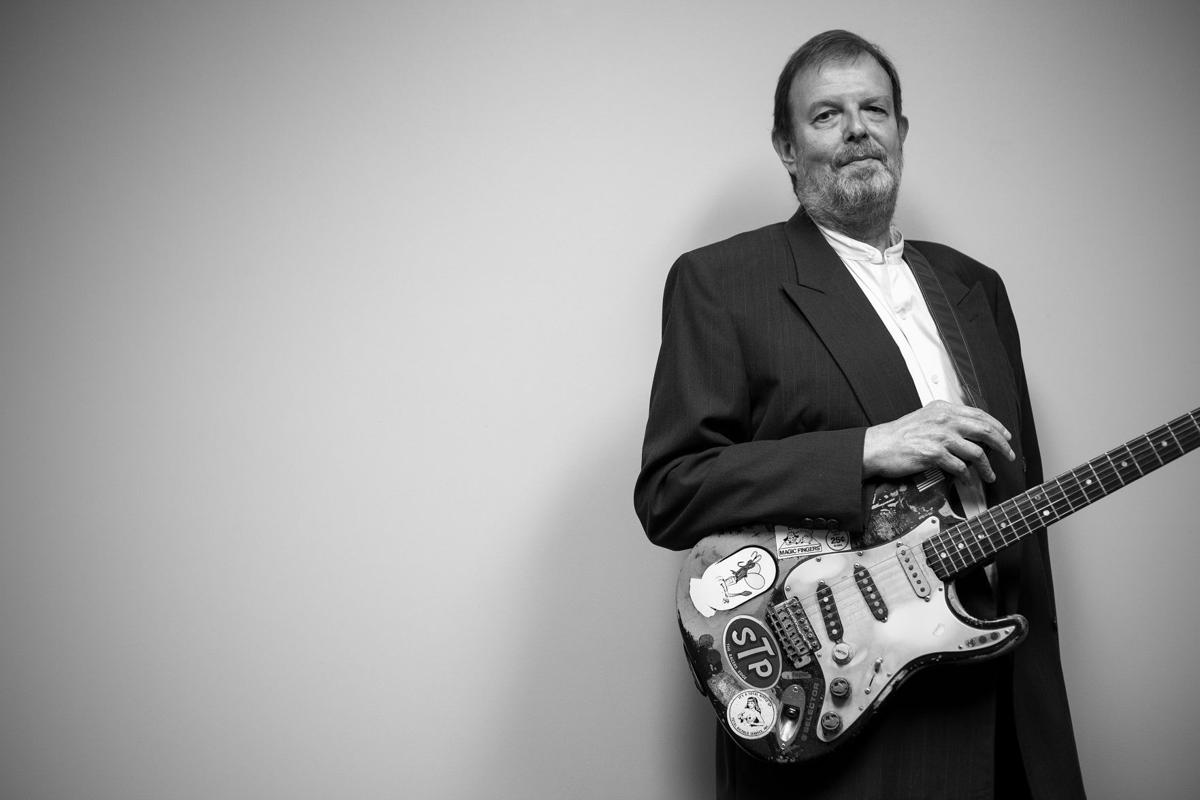 “Tulsa Sound” music figure Tommy Tripplehorn, shown in 2010, died March 15. He was 75. Tripplehorn is best known for being a guitarist in the 1960s hit-making group Gary Lewis & The Playboys, but he also was a gifted jazz pianist. COURTESY/Kelly Kerr 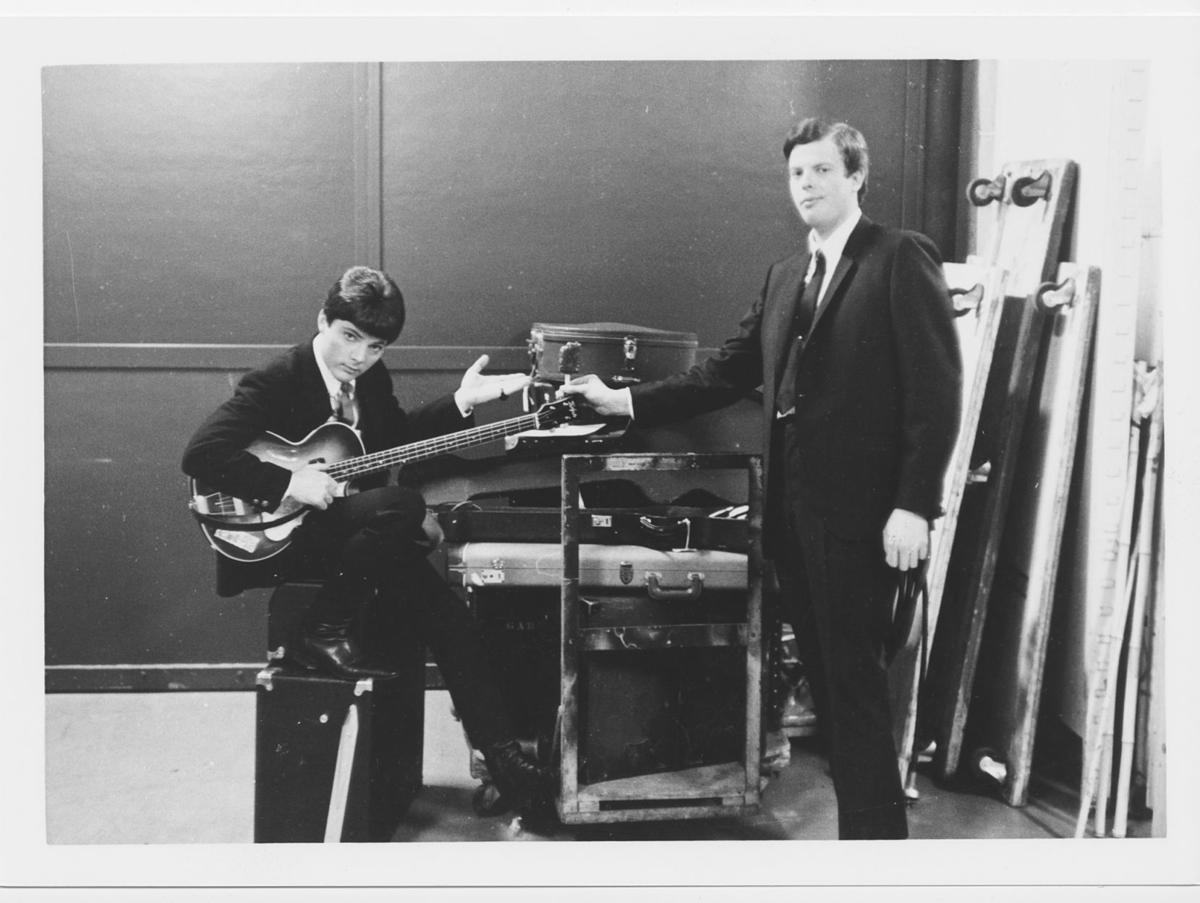 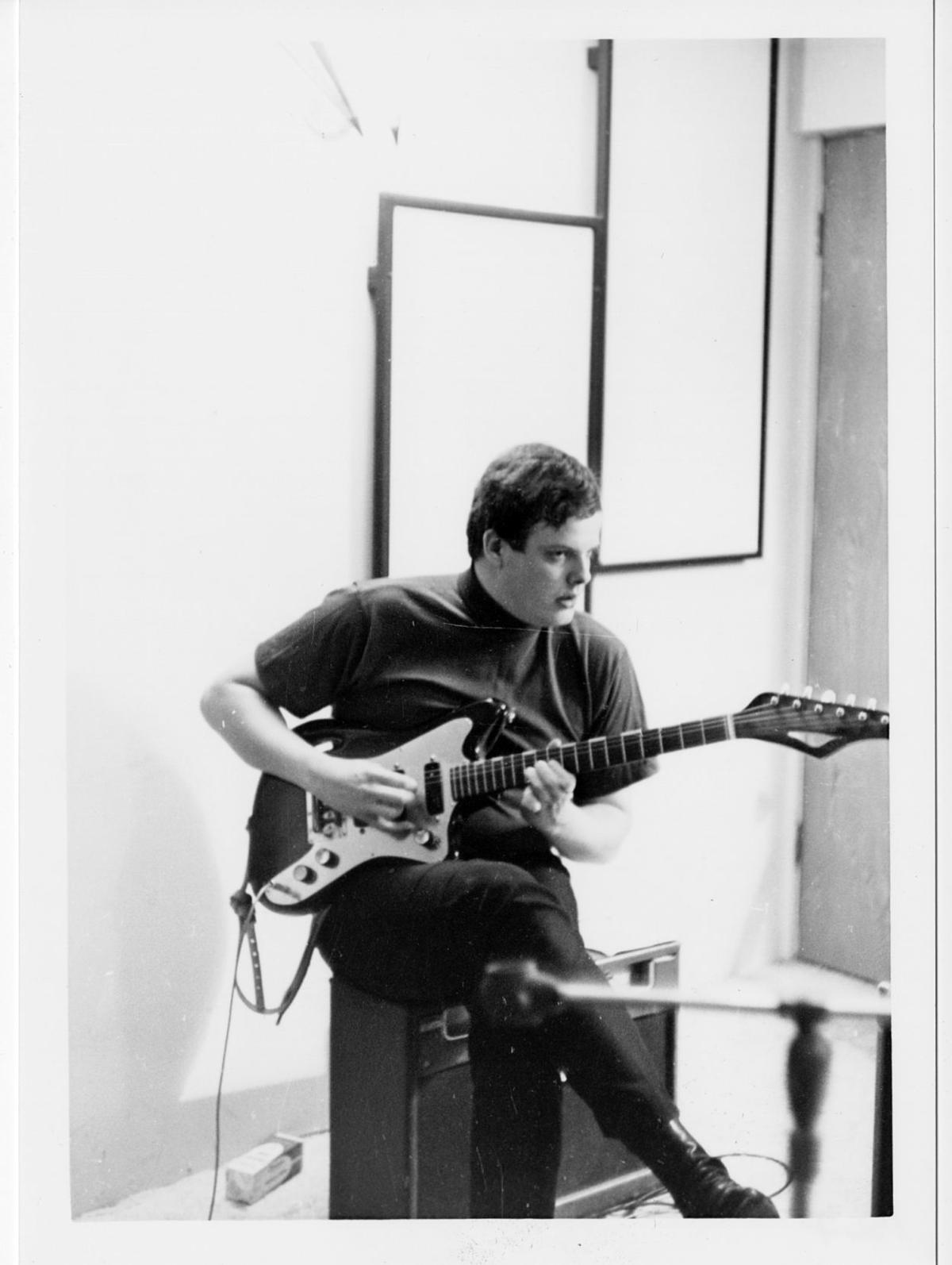 Tommy Tripplehorn learned to play the guitar when he was growing up in Tulsa and later became the guitarist for Gary Lewis & The Playboys. Tripplehorn died March 15. He was 75. COURTESY/OKPOP/Steve Todoroff Archive Collection 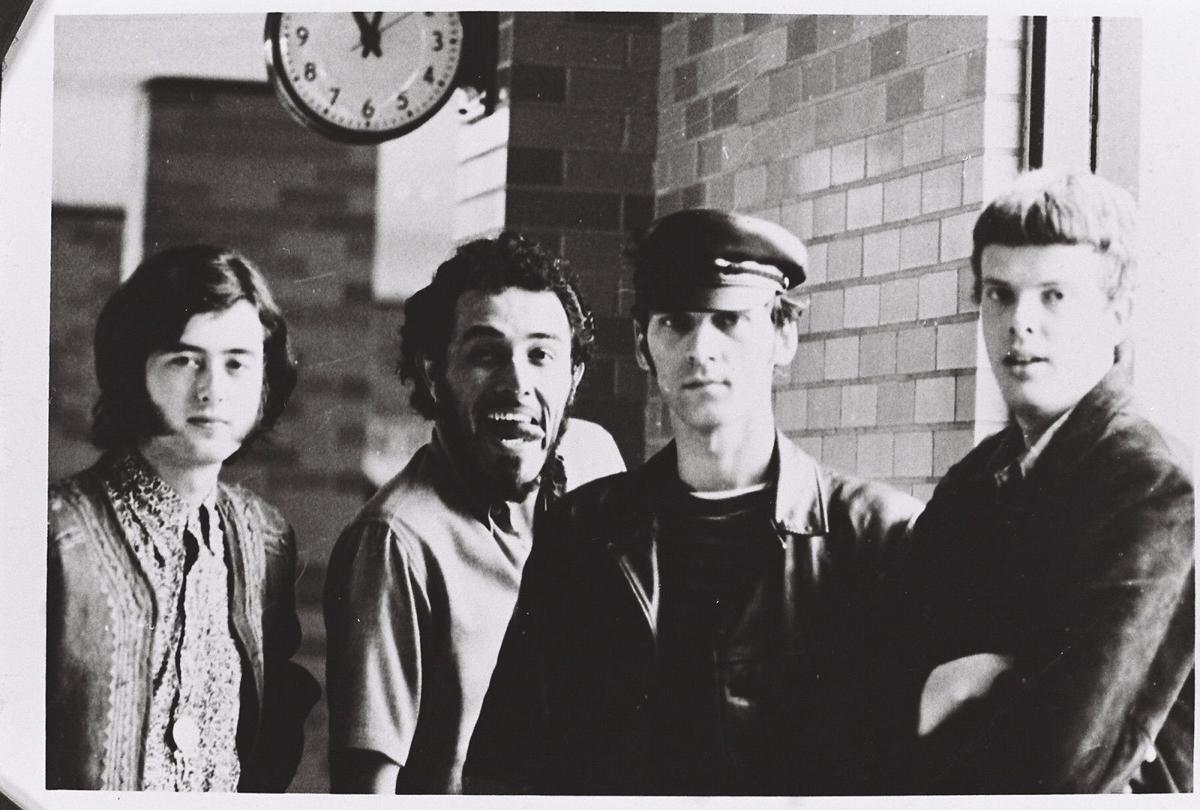 As public shout-outs go, this was a big one:

Near the end of Eric Clapton’s 2010 performance at Tulsa’s BOK Center, the rock legend said, “I’d like to dedicate this show to two of my personal heroes, David Teegarden and Tommy Tripplehorn.”

The words are being shared again here to help others fathom that the music world lost a figure of note.

Tripplehorn, 75, died March 15. He is best known for being a guitarist in Gary Lewis & The Playboys, a hit-making band (fronted by the son of comedian Jerry Lewis) that spawned nine top-15 chart singles in the 1960s.

Born Feb. 2, 1944, Thomas Justice Tripplehorn is survived by daughter and actress Jeanne Tripplehorn, grandson August Tripplehorn Orser, son-in-law Leland Orser, brother- and sister-in-law Jim and Rita Tripplehorn and their children Tyler Tripplehorn and Lauren Tripplehorn; and his partner of many years, Melinda McLane. He was preceded in death by parents Joseph and Gertrude Tripplehorn. No memorial service is scheduled at this time. Memorial donations can be made in his name to MusiCares.

This statement was included in obituary information provided by the family: “Tommy will be deeply missed. He was loved and admired by all who knew him for his music, his commitment to the creative process, his astute observations of life, his laugh-out-loud sense of humor and for his artist’s heart.”

One can connect the dots from Clapton to Tripplehorn by way of the “Tulsa Sound.”

Tulsa Sound impact? Elton John called Russell “my idol” during a February concert in Tulsa. Clapton recorded songs (“After Midnight,” “Cocaine”) written by Cale, populated his band with Tulsans and, in 2014, released a Cale tribute album.

Jeff Moore of the Oklahoma Museum of Popular Culture said the Tulsa Sound wave of musicians seemed to be three, four or five people deep at every instrument. Tripplehorn was high on the guitar depth chart.

“Tommy was a bad-ass,” said Jim Keltner, a drummer and former Tulsan who has played with the biggest superstars in music.

Teegarden said this about Tripplehorn: “He was such a talented player. He had a certain sound. ... You could walk in and hear him doing a solo and know it was him. He had such a finesse, and he worked out all his parts and was amazingly accurate.”

Tulsa Sound music figure Gary Gilmore said Tripplehorn was innovative: “He was kind of the style of guitar player like Eric Clapton where he didn’t play that many notes, but he bent the notes and had, really, to me, my favorite kind of guitar sound.”

The world lost a crack guitar player. Gilmore lost his best friend. He said his family moved to a home on Tulsa’s South Columbia Avenue when he was 6. The two-years-older kid next door was Tripplehorn.

“Growing up, we just had a great time there,” Gilmore said.

He said Tripplehorn was about 16 when he decided to play guitar. Tripplehorn took lessons from Dick Gordon, a teacher of many accomplished Oklahoma guitarists. Gilmore took lessons, too. They learned the basics from Gordon, and Tripplehorn’s abilities surfaced.

“Tommy had a really good ear, a natural ear, for music,” Gilmore said. “We would get the 45 records that we listened to on the radio that we wanted to learn how to play. Tommy would sit in there with that record player and play that song over and over again and pick out all the parts for it. He would teach me songs that way. We both played guitar for a while, but then it was obvious I had to switch to bass guitar because Tommy had the guitar covered.”

Of course, they decided to get a band together. They teamed with David Boaz and Bob Boaz to form an instrumental group. With the addition of singer Larry Bell, a Central High School classmate, the band became Larry Bell and the Teardrops. The kids played local gigs — and watched more advanced performers — to hone their craft. Gilmore said he and Tripplehorn showed up to hear Cale any time they could catch him playing somewhere.

“We would go out and listen to his band and get an idea of what we wanted to try to sound like,” Gilmore said, adding that they also listened to Russell at local clubs.

After Larry Bell and the Teardrops, Gilmore and Tripplehorn traveled around Oklahoma with Tulsa Sound musician Jimmy Markham. California was the next frontier. Cale went west and Gilmore joined him there. Russell was producing Gary Lewis & the Playboys. Russell summoned Tripplehorn and Tulsa’s Carl Radle to be in the band. Keltner became the group’s drummer when Lewis decided he didn’t want to play drums anymore.

“The thing I will always remember was the time we spent in Hawaii,” Keltner said, adding that he and Tripplehorn were initially tour roommates. “That was my first trip on a plane, ever, and I think I was 23. It was a very exciting time. We were treated like big stars because Gary had those hits. We went to Oahu and we played some gigs there, but the time off that we had was spent playing around.”

Tripplehorn made appearances on “The Ed Sullivan Show” and “American Bandstand” while with the group.

“Tommy was a big part of making that a really good band,” Gilmore said.

Did Tripplehorn almost graduate to another band? Moore interviewed Tripplehorn for the Oklahoma Museum of Popular Culture. Moore asked about the circumstances that led to Tripplehorn appearing alongside Jimmy Page, Sam the Sham and Don Nix in a photo.

Tripplehorn said multiple acts were part of a traveling festival, Dick Clark’s Caravan of Stars. Among participants were Gary Lewis & the Playboys and English group The Yardbirds, a Rock and Roll Hall of Fame band that launched the careers of revered guitarists Clapton, Jeff Beck and Page.

“That would have changed rock ’n’ roll history potentially because everybody said that Tommy was an incredible guitar player, one of Tulsa’s best,” Moore said. “Jimmy Page wanted him in the Yardbirds. That’s how good he was.”

Lewis wound up in a different group — the Army — when he was drafted in 1967.

Tripplehorn returned home to Tulsa and continued his music career. He enjoyed a long association with the Bill Davis Band. He also played piano at local venues and, in 2004, released a solo jazz piano album (“Implications”) of standards with an emphasis on minimalism.

Keltner said he and Tripplehorn bonded over a love of jazz when they were in Gary Lewis & the Playboys: “We talked jazz all the time. He was a Bill Evans fanatic and I was, too.”

Tulsa keyboardist Walt Richmond has toured with Eric Clapton and many other prominent acts. He was on stage when Clapton gave Tripplehorn the shout-out in 2010. During a recent interview, Richmond recalled hearing Tripplehorn playing Bill Evans material on the piano. Reaction: This guy is unbelievable.

“He picks up by ear, and he had a great ear,” Richmond said. “But he could pick out incredibly hard stuff, jazz stuff. He played a real good honky tonk piano, too, so it’s yin-yang.”

According to Tripplehorn’s family, he studied classical piano at the University of Tulsa in the early 1960s. Beginning in 2001, Tripplehorn and other musicians met regularly at Richmond’s home for “piano conferences.” Basically, they huddled and tried to solve all the world’s problems, according to Richmond.

When elaborating about the circumstances that might have led to Clapton mentioning Tripplehorn, Richmond indicated word got out at some point in Tripplehorn’s career that he was “heavy duty.” Richmond said Tripplehorn made a legend of himself among players but wasn’t a “hey, look at me” kind of guy.

“Tommy was quiet,” Keltner said. “He wasn’t the type of guy who would call you and tell you what he was doing. You would kind of have to hear it from somebody.”

Now, Keltner thinks it’s important for people to know Tripplehorn was far more than a pop guitar player in a top 40 rock band. Keltner said the Gary Lewis & the Playboys songs were simple songs that were crafted to be hits. But he said Tripplehorn was a superlative musician who made the songs sound sophisticated.

Said Gilmore: “I was fortunate to play music with Tommy in a lot of different bands. He was such a good friend. I’m going to sure miss him. It doesn’t seem like he should be gone.”

Frank Bonner, star of 'WKRP in Cincinnati,' dead at 79

The resume for the Country Music Hall of Fame group includes 43 No. 1 singles.

A news release said it will be Dylan's first broadcast concert performance in nearly 30 years.

Bob Wills transformed the historic venue into the Carnegie Hall of western swing.

Festivals coincide this weekend in Grove

Musical entertainment, food and boat races will be part of the American Heritage Music Festival, founded by Jana Jae, and the Toes in the Grand Summer Kickoff Festival at Grand Lake.

B.J. Thomas was born in Hugo and raised in Texas. He died last week at age 78.

Acoustic Freight Train Instrument Donation and the Tulsa Boys' Home are teaming up on the venture.

Roy Clark, nicknamed "superpicker" because of his skills with musical instruments, owned a personalized 1977 Lincoln Continental Town Car during his years as a Tulsa resident. The vehicle is among items for sale at an estate sale scheduled to begin June 2.

“Tulsa Sound” music figure Tommy Tripplehorn, shown in 2010, died March 15. He was 75. Tripplehorn is best known for being a guitarist in the 1960s hit-making group Gary Lewis & The Playboys, but he also was a gifted jazz pianist. COURTESY/Kelly Kerr

Tommy Tripplehorn learned to play the guitar when he was growing up in Tulsa and later became the guitarist for Gary Lewis & The Playboys. Tripplehorn died March 15. He was 75. COURTESY/OKPOP/Steve Todoroff Archive Collection