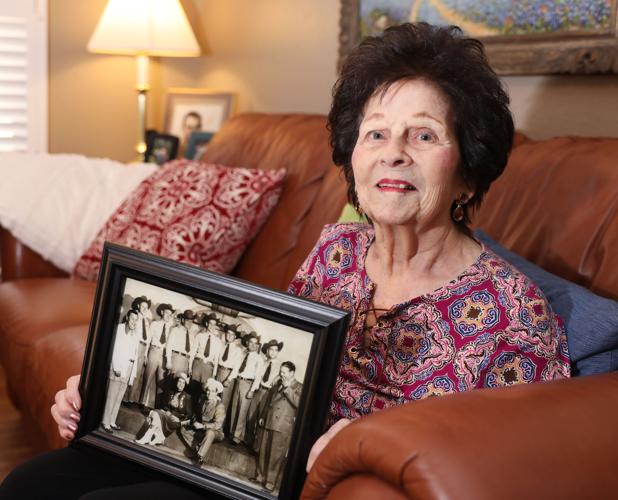 Ramona Reed, photographed at her home in Clayton, Oklahoma, in 2020, holds a photo of herself with Bob Wills and the Texas Playboys. She was once a member of Wills’ band and doubled as Martha White on the Grand Ole Opry. 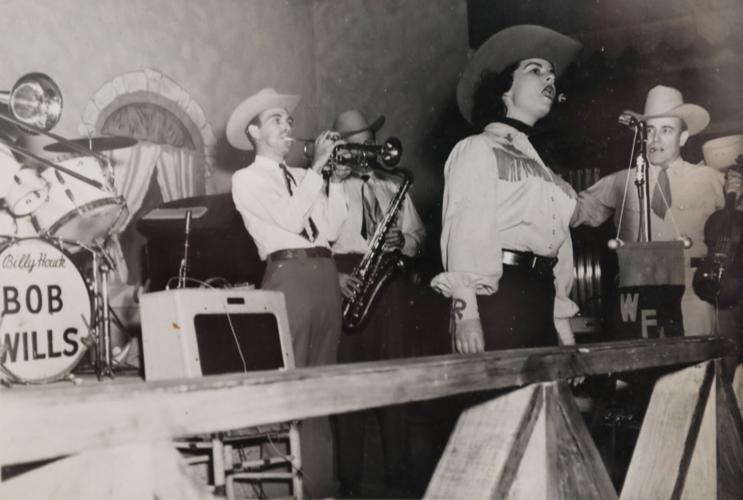 A photo in Ramona Reed’s home showed her as a member of Bob Wills and the Texas Playboys, a legendary western swing band.

Ramona Reed’s singing voice took her to the Grand Ole Opry as a teen and won her a gig as a “playgirl” with a legendary Western swing band, Bob Wills and the Texas Playboys. She died Saturday, her family confirmed. She was 91.

In addition to touring and recording with Wills (including the duet “Little Girl, Little Girl”), Reed made appearances on the Opry as Martha White on behalf of a flour company.

Selected for the Oklahoma Music Hall of Fame in 2009, Reed was born in Talihina, Oklahoma. She grew up on a farm and, as a child, sometimes sang to farm animals.

“I used to climb aboard our smokehouse and sing so all the neighbors could hear me,” Reed wrote in a manuscript she kept in case she wrote a book about her life. “I would pretend that I was on some radio station or singing in a movie. I was quite confident that someday I would be singing on the radio or in a Western movie.”

During her early years, Reed auditioned at Tulsa radio stations to try to get her career jump-started. She visited Cain’s Ballroom to watch Johnnie Lee Wills do a radio show.

“Little did I dream that I would be singing on that stage some day with Bob Wills,” Reed said in her manuscript.

Reed tried out for Bob Wills and the Texas Playboys in 1950.

“Bob Wills was sitting out in front, and he was smoking that cigar,” Reed told the Tulsa World in a 2020 interview.

“I could not tell if he liked what I was doing or not. Finally, I had sung just about everything I thought I knew. So I kicked off my shoes and I sang the rest barefoot. He kind of liked that.”

And that’s how a barefoot country girl from southeastern Oklahoma became a Texas Playgirl.

When Reed was selected for the Oklahoma Music Hall of Fame, fellow inductees included Rocky Frisco and Carrie Underwood. Underwood told Reed’s children she learned to yodel by listening to Reed, according to Reed’s daughter Karen Smallwood. Said Smallwood: “She was in awe of meeting mother. It was really pretty cool.”

Reed’s parents told her she was singing and yodeling by the time she was walking. At age 15, she was performing weekly at a radio station in McAlester.

In the summer of 1948, when Reed was 17, she felt compelled to go to Nashville. Her mother drove her there. Reed popped into radio station WSM for an audition and was invited to be on the station’s “Noontime Neighbor Show” that day. By the following Saturday, she was sharing a Grand Ole Opry stage with Roy Acuff, who introduced her as “not as big as a minute and cute as a bug’s ear.”

WSM program director Jack Stapp urged Reed to return to school (Colorado Women’s College) and come back to Nashville the next year. She took his advice.

When Reed returned, Grand Ole Opry sponsor the Martha White flour brand needed someone to embody the character Martha White. The flour company had a Martha, recalled Reed, but she wasn’t ideal for the part, so Reed was invited to be the new Martha. She declined, saying she wanted to make a name for herself instead of using Martha’s name.

When Reed returned to Oklahoma, however, she had a change of heart. She wrote a letter saying she would like to be Martha after all. Reed didn’t get a response right away, giving her reason to be concerned, but when the response arrived, it was, “Can you be here Saturday for the Opry?”

Reed was hired to make appearances and perform as “Martha” on the Opry every Friday and Saturday night, in addition to making daily morning appearances on WSM. She shared a dressing room with Minnie Pearl at the Opry.

Reed felt fortunate to be around Opry performers she admired, but two years as Martha was enough. She returned home, not knowing what her next step should be.

“Mr. Taylor, our dear old neighbor who lived across the road from us, told Daddy that he was worried about me sitting outside looking sad for long periods of time,” Reed wrote in her manuscript. “I guess I was thinking. I knew that somewhere out there had to be something for me. Even Nashville hadn’t been exactly what I was searching for.”

She found what she was looking for when the Bob Wills Ranch House opened in Dallas. A parade was scheduled in conjunction with the launch. Reed and a girlfriend hopped into her convertible so they could join the parade and get a foot in the door. Her car stalled, which proved to be a lucky break. Reed finished the parade by riding on a stagecoach with the Texas Playboys.

At the Ranch House, she saw the stage and knew she had to get on it. “And I was before long,” she said.

The barefoot audition led to two years of touring and performing with the Texas Playboys before she left the road for domestic life. She returned to Oklahoma to see her brother off to the Korean War and, while there, found a husband. Driving through Clayton, Oklahoma, she did a double take when she spotted a handsome soldier in front of a cafe; “When I came back through, someone was flagging me down and said, ‘There’s a soldier that wants to meet you.’”

She and Lt. Jim Blair, a decorated returning Korean War officer, were married less than two months later — Sept. 28, 1952. Wills approved, telling her she “found a real man this time.”

Reed became a mother to four children who shared her love of music and occasionally reunited with Wills over the years. In her 2020 interview with the Tulsa World, Reed said she cherished making people happy with her singing and yodeling.

'I'm finding my way,' Vince Gill tells the Oklahoman ahead of Tulsa, OKC shows this week

His two-night, home-state stand Thursday and Friday will mark the first concerts the 65-year-old country star, has performed in Oklahoma since he won his 22nd Grammy in 2021.

The move is expected to be complete by late September.

"Old Soul II" is a follow-up to a 2020 album of cover songs, "Old Soul." Among tracks is Gladys Knight's "Midnight Train to Georgia."

The album "Tourist" was released Aug. 5 via Black Mesa Records.

Kenny Wayne Shepherd to perform at The Cove February 2023

Travis Barker is already back on stage against doctor’s orders

Ramona Reed, photographed at her home in Clayton, Oklahoma, in 2020, holds a photo of herself with Bob Wills and the Texas Playboys. She was once a member of Wills’ band and doubled as Martha White on the Grand Ole Opry.

A photo in Ramona Reed’s home showed her as a member of Bob Wills and the Texas Playboys, a legendary western swing band.