Liggett has been building acoustic and electric guitars for about nine years, such as the AbstracT, a model inspired by the Fender Telecaster.

But the idea of putting one of his guitars next to the items that make up “A Luthier’s Tale: The Craft of Stringed Instruments” made him more than a bit uncomfortable.

“It would be like curating a show of Andy Warhol’s work, and you decide to add one of your own drawings to it,” Liggett said. “It just didn’t seem like the right thing to do.”

“A Luthier’s Tale” collects examples of handmade acoustic and electric guitars, along with banjos, violins, violas, cellos and double-basses, which either were made by Tulsa-area luthiers, or at least have some kind of Tulsa connection.

Liggett said he learned that 108 Contemporary, the Tulsa Arts District gallery that specializes in showcasing and promoting fine craft art, was wanting to do an exhibit on the art of instrument-making and approached the gallery with his ideas.

“The one thing I really wanted everyone to see in this exhibit is everything that goes into the making of a guitar or a violin,” he said. “These things aren’t just spat out of a machine. A lot of love and care has gone into the making of every one of the instruments in this show.”

Most of the instruments on display are one-of-a-kind creations, such as “Audrey One,” an electric guitar created by a team of Japanese artists that calls itself Jersey Girl Handmade Guitar. Liggett said he included the guitar in the show because the artists who made it drew from Native American imagery to create the inlays that adorn the neck.

The bulk of the guitar is fashioned from mahogany, with rosewood and maple accents, from the settings for the guitar’s pickups to the covers of the tone and volume control knobs.

“Tropical woods like rosewood and ebony have some unique qualities,” Liggett said. “If you tap a piece of rosewood, it creates this bright, bell-like chime. It just rings. On the other hand, tap a piece of walnut, and it creates a much lower pitch. The density of certain woods just have a unique resonance that really adds to a guitar’s character.”

Some guitars in the show, on the other hand, are made from materials that have a character beyond simply how they sound.

The Cain’s Ballroom Guitar, created by Roger Cowan of Dog Tired Guitars in Perkins, is made from wood reclaimed from the original dance floor of “Tulsa’s Timeless Honkytonk.”

One can see the mortise and tenon joints of the floorboards along the edge of the guitar (the original wood is sandwiched around another, solid piece of wood to stabilize the instrument), and the pick guard is fashioned from an old Bob Wills vinyl record.

“What I think is really cool,” Liggett said, flipping the guitar over, “is that you can see the imprint of the mill that made the boards for the Cain’s floor.”

Other eye-catching instruments include William Murrell’s “Victory Series Electric Guitar,” whose body is fashioned from tiger maple and shows off the wood’s unique pattern; a trio of “Twangcaster” models by Tulsa guitar maker Lloyd A. Prins, who has created guitars for top Nashville session and touring guitarists, as well as for Oklahoma musicians including Cody Canada and Jason Boland; and Larry Hefner’s custom solid-body electric guitar decorated in a style reminiscent to the abstract art he creates.

In the case of the members of the violin family on display, Liggett relied a great deal on Lou Lynch, who has owned the Tulsa Violin Shop in the Tulsa Arts District for many years.

Included in the exhibit are individual violins and violas, as well as string quartet sets (two violins, viola and cello) by Guy Cole and Ken Beckmann, and bows by Tom Goering.

“Lou is much more in touch with that aspect of the luthier world, and he pointed me to the right people,” Liggett said.

Liggett, a Tulsa native, originally trained to be a machinist at Tulsa Technology Center, and spent a few years making parts for the oil industry.

“I always liked working with my hands, and I knew that college wasn’t for me,” he said. “But after a while I got to the point where what I was doing wasn’t fun anymore. I thought I would start working in wood, because I could deal with wood splinters a lot easier than I could with metal shavings.”

He went to the Roberto-Venn School of Luthiery in Phoenix, a five-month immersive course in instrument-making in which students had to build one acoustic and one electric guitar.

Liggett returned to Tulsa and went to work at Bishline Banjos, which is run by Rob Bishline, himself a graduate of the Roberto-Venn School.

Liggett acknowledged that making custom guitars isn’t a path to financial riches, but the rewards the process offers cannot be beat.

That includes seeing the instruments he has selected for the show displayed on the walls of the 108 Contemporary exhibition space.

“I really like the fact that these guitars are hanging on the wall as pieces of art,” Liggett said. “Because that’s really what they are. You look at something like the scroll at the end of a cello’s neck, or the fine detail most people won’t ever notice, and it’s obvious that these instruments are also beautiful works of sculptures.”

"A Luthier's Tale: The Craft of Stringed Instruments"

108 Contemporary will hold a series of events in conjunction with the exhibit "A Luthier's Tale: The Craft of Stringed Instruments."

July 22 — Lecture by Rob Katz, Tulsa Symphony Orchestra bassist and musicologist, on the African origins of the banjo. The lecture, which begins at 7 p.m., will be held at 108 Contemporary as well as streamed live.

For more information, and to purchase tickets: 108contemporary.org.

Watch Now: The Men Who Would Be Scene: Episode 19 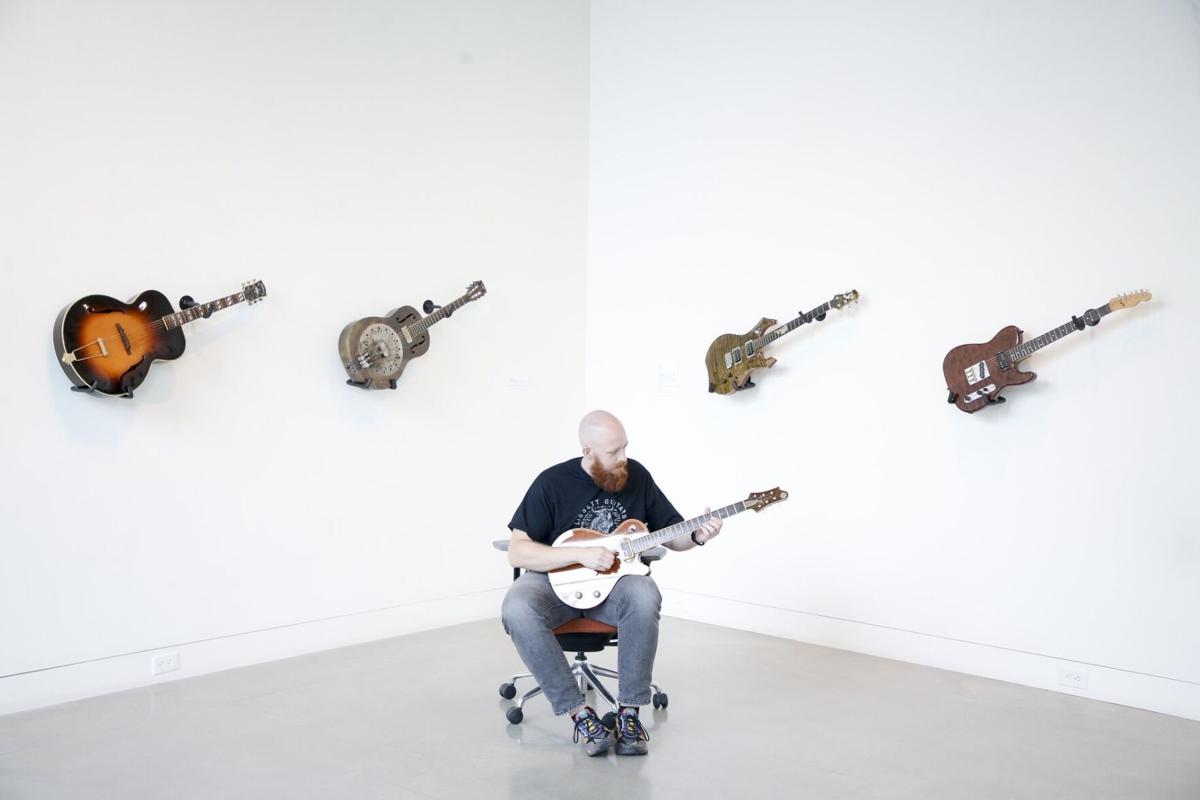 Benjamin Liggett plays “Audrey One,” one of the guitars in the exhibit he curated for 108 Contemporary. The exhibit features unique instruments, many of which were crafted by Oklahoma luthiers. 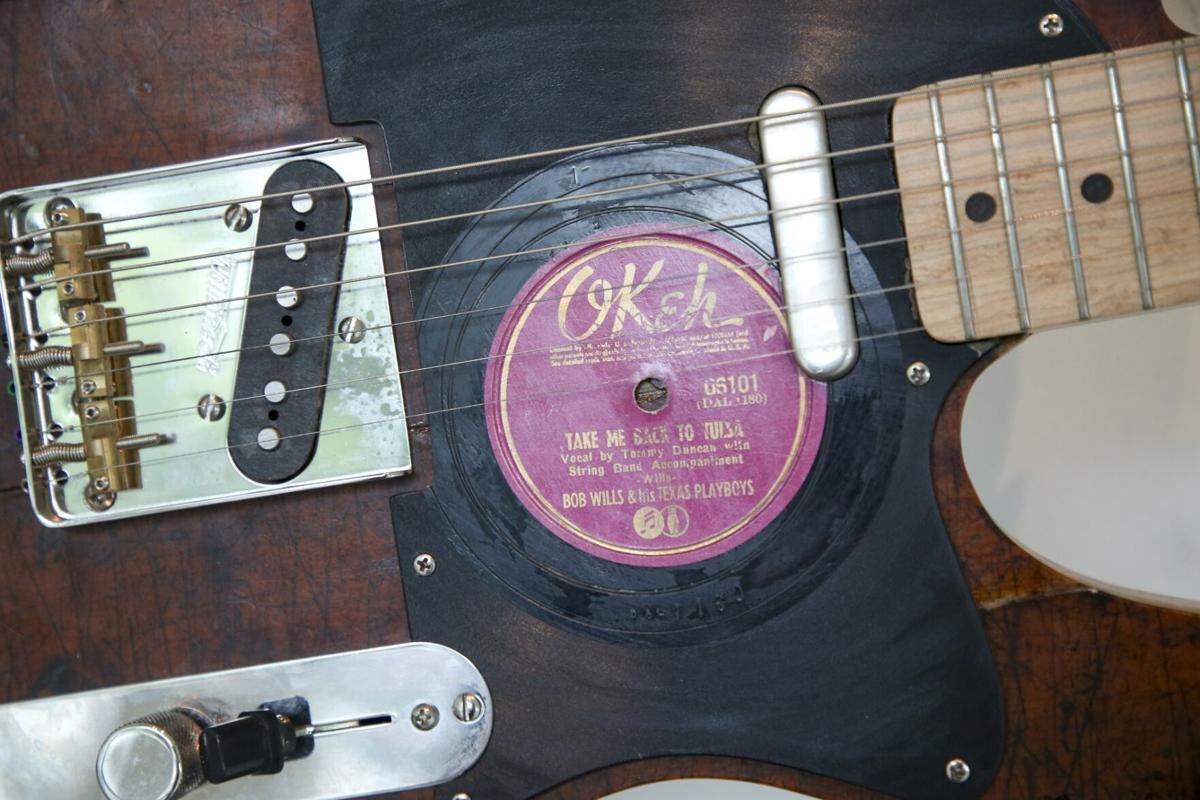 A Cain’s Ballroom-inspired guitar includes the detail of a Bob Wills album in the center. 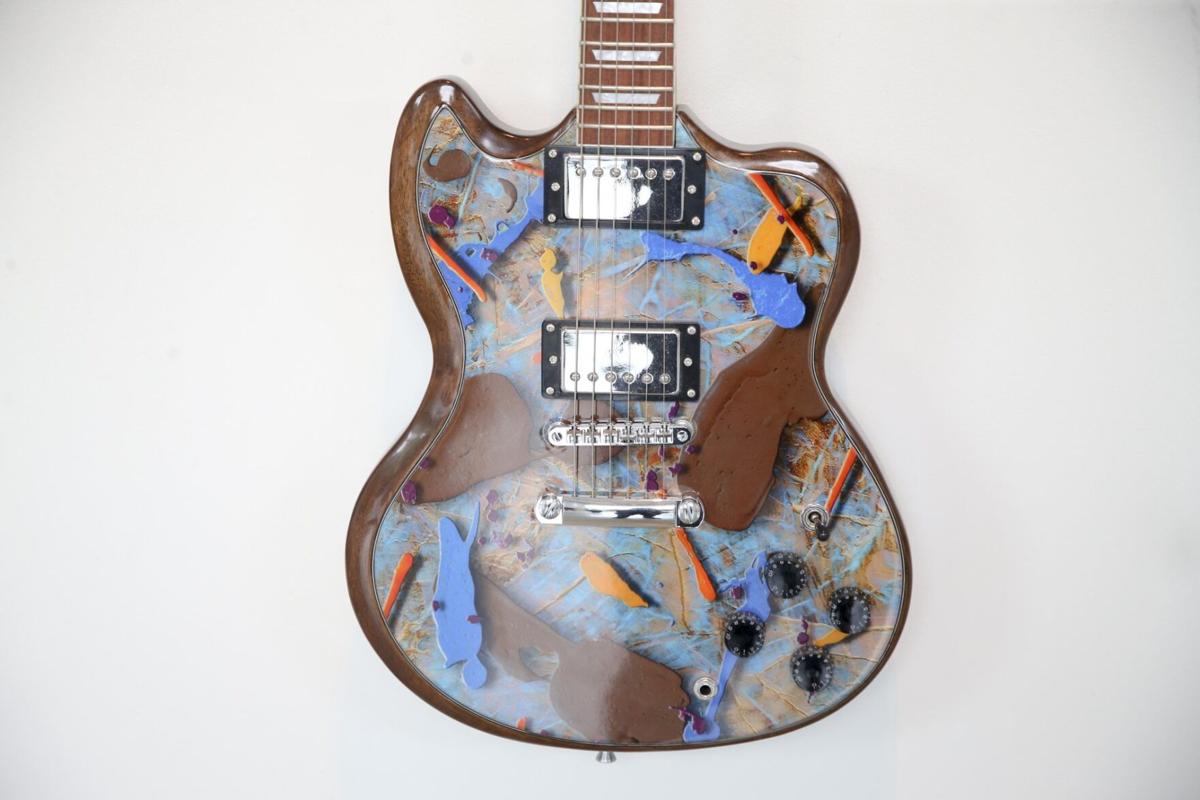 A modern art-inspired Gibson-style guitar sits on display for an exhibit at 108 Contemporary. 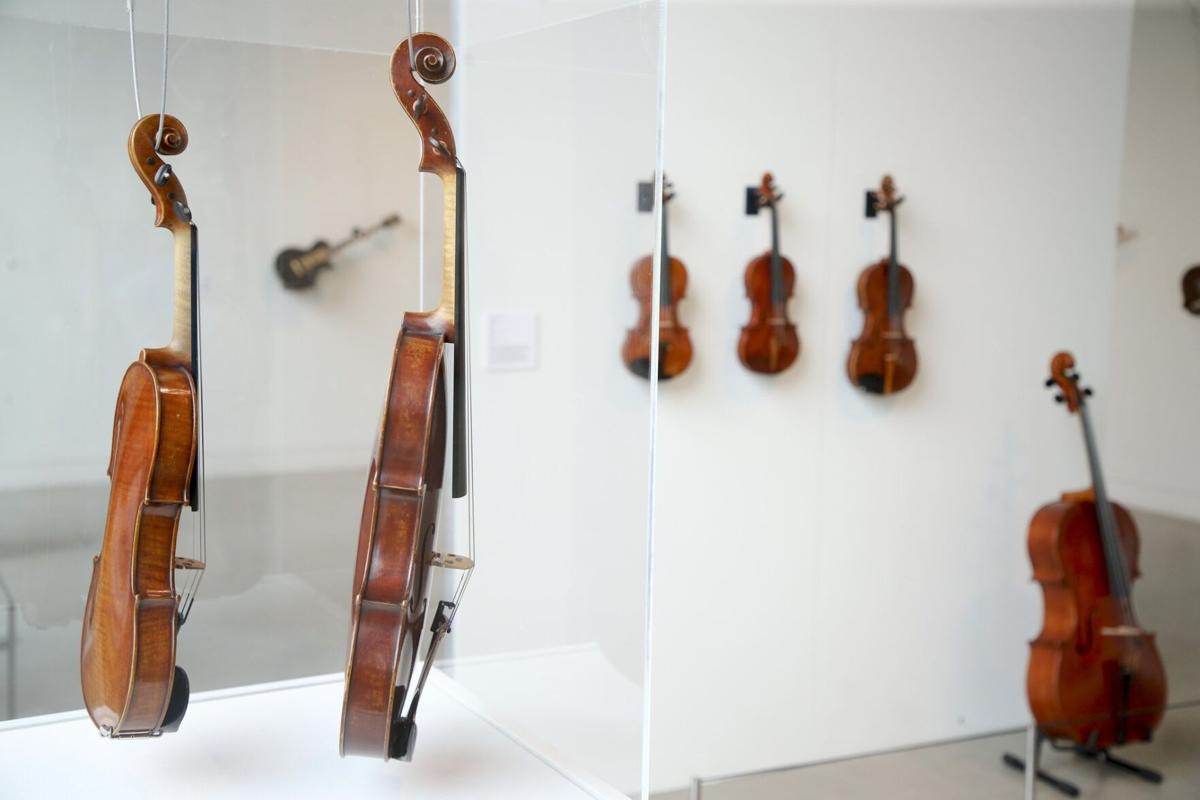 Violins and other stringed instruments are on display at 108 Contemporary. 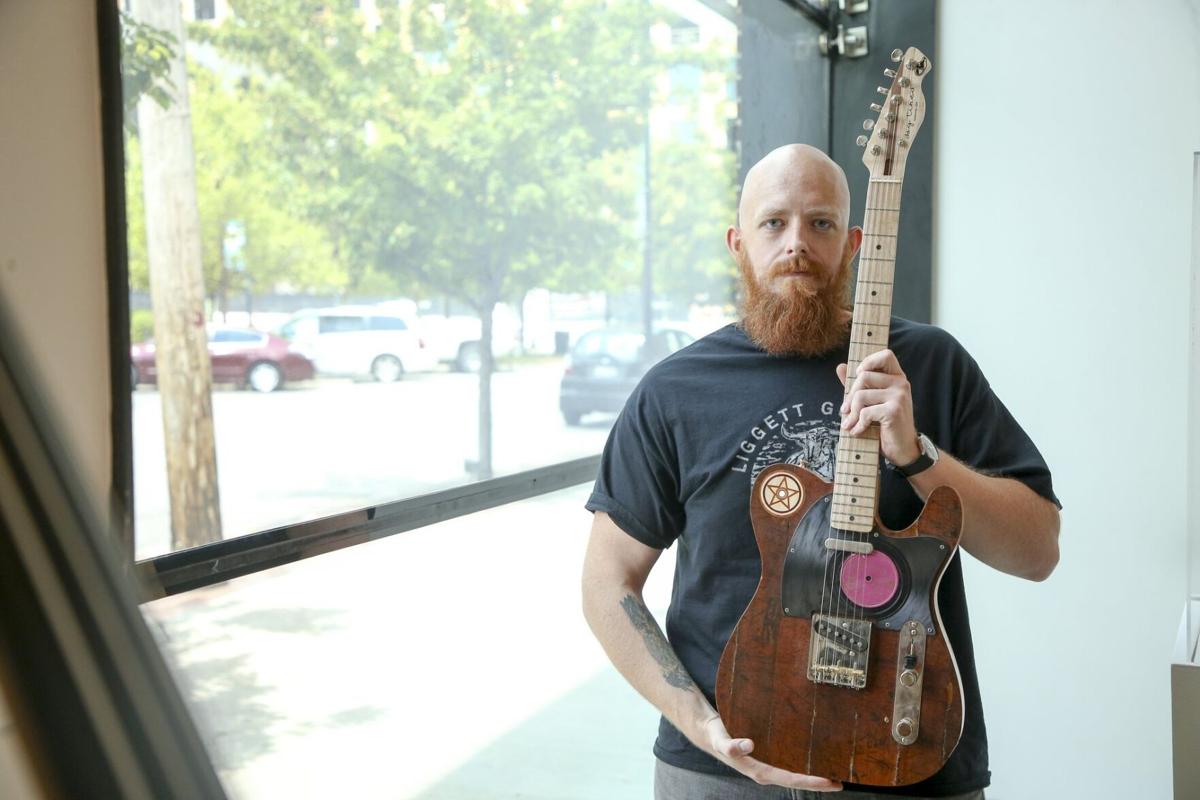 Ben Liggett curated the exhibit “A Luthier’s Tale: The Craft of Stringed Instruments” that is now on display at 108 Contemporary. He holds the Cain’s Ballroom Guitar, made from wood that once was part of the dance floor at “Tulsa’s Timeless Honkytonk.” 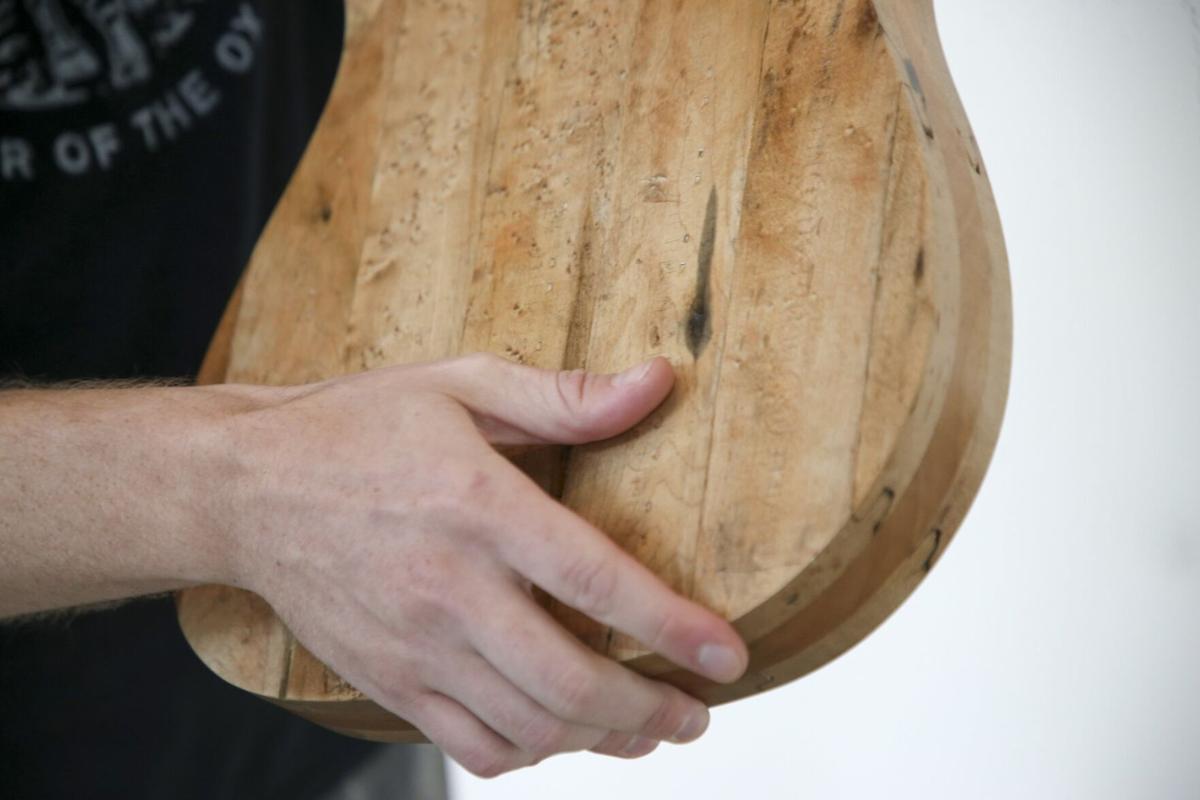 Roger Cowan’s Cain’s Ballroom Guitar retains the imprint of the name of the mill that made the boards for the venue’s dance floor. 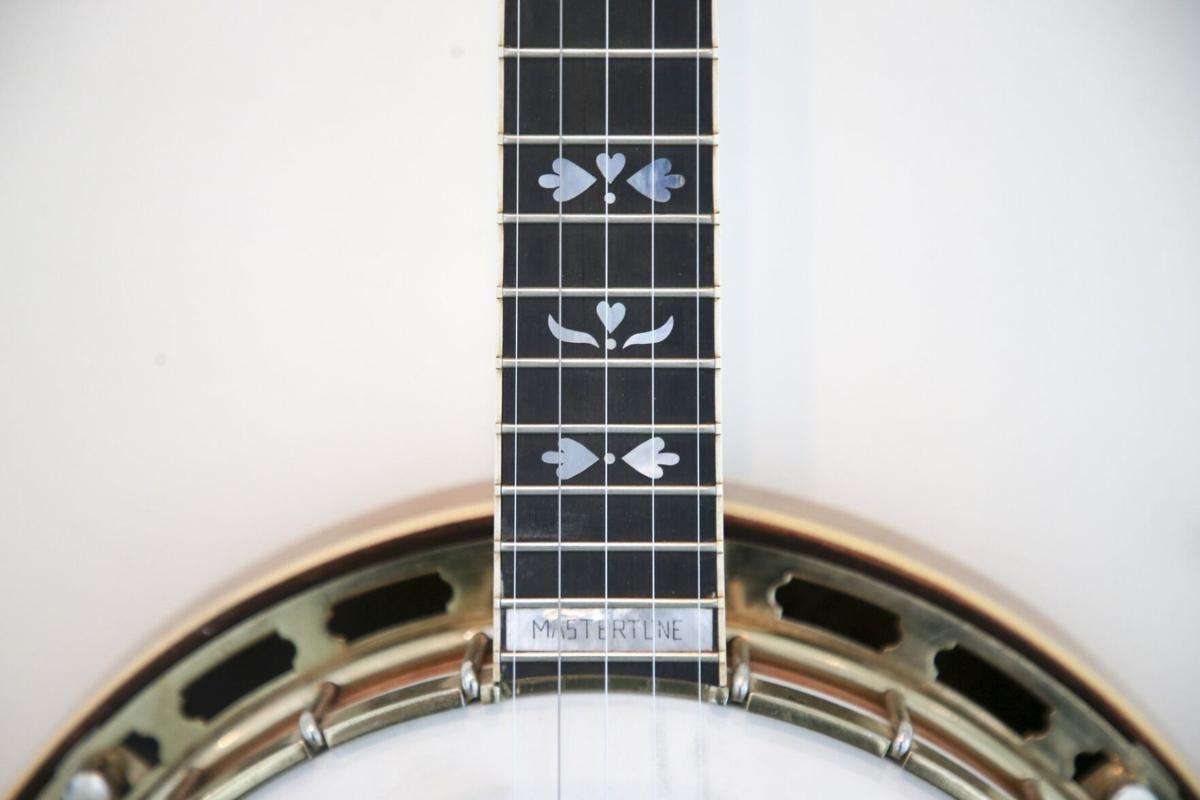 The neck of a banjo on display for an exhibit at 108 Contemporary.